The RotoUnderworld community will be partaking in a series of 12-team, five-round rookie mock drafts, running through the summer. The mock drafters will be comprised of PlayerProfiler writers/analysts, our friends in the Patreon community, and our good friends over at The Breakout Finder. While these pieces will include quick-hitting notes from the drafters about why they made their selection, our writers will take turns recapping the festivities and adding their own unique perspectives.

The Underworld gang has gathered for yet another mock draft. This time was a traditional 1QB rookie mock. It has now been three months since the rookies were drafted and we have made it through OTA’s. Other iterations of this article series have provided some individual analysis by each participating drafter. Today we are going to recap each round and provide some thoughts at the end.

Below is the Underworld drafters and draft order for this mock: 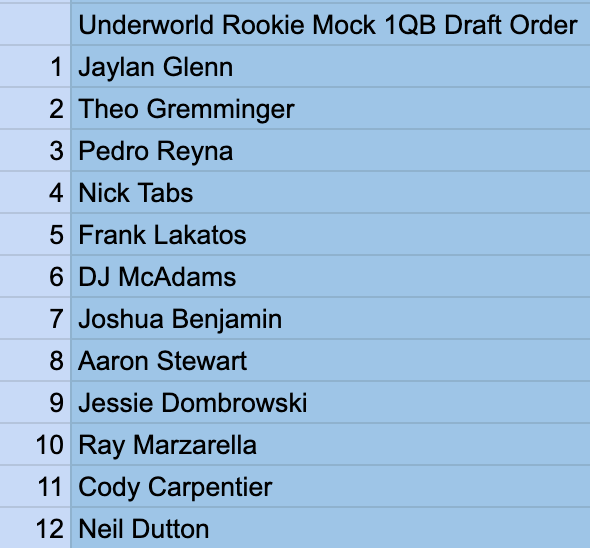 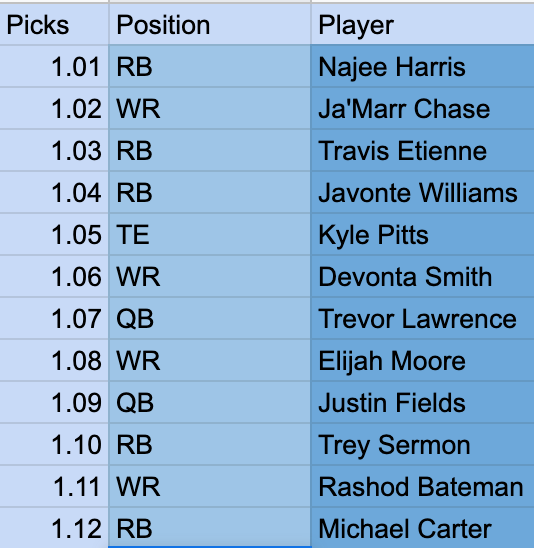 Round 1 began in a similar way as our previous rookie mock at the beginning of July, with Najee Harris being taken at the 1.01. This is no surprise to fantasy gamers because he walks into an incredible role and has enormous rookie year upside. The only player we have ranked higher in our rookie rankings is (you guessed it) Travis Etienne, who fell to the 1.03 in this draft. This was not a surprising drop since he has plenty of competition in the backfield with James Robinson, who is coming off a stellar rookie season where he racked up 1,070 (No. 5 among qualified running backs) rushing yards and 10 (No. 10) total touchdowns.

Between Harris and Etienne wentJa’Marr Chase. Then, all of our other top-ranked rookies went off the board inJavonte Williams, Kyle Pitts, and Devonta Smith.

The first round continued with mostly positional players, including Elijah Moore and Trey Sermon, but had a surprising pick of Justin Fields at the 1.09, just two picks after Trevor Lawrence.

Fields is currently our No. 3-ranked quarterback behind Lawrence and Trey Lance. I can hypothesize that the positive words from Chicago Bears coach Matt Nagy in OTA’s about Fields might have something to do with him being taken so high. The first round concluded with selections of Rashod Bateman and Michael Carter. Bateman is a great value at the 1.11 since he is currently our No. 7-ranked rookie. He will likely take on a huge role in Baltimore’s passing game since there is no clear WR1. In addition, Carter is another great value as the last pick in the first round. The Jets and Carter have been the talk of the summer in the fantasy community. For those who are ALL IN on Carter in 2021, let’s hope that Ty Johnson, Tevin Coleman, and La’Mical Perine do not ruin their hope and dreams.

Round 1 had few surprises outside of Fields being taken before Lance, and a majority of the players taken were ranked in the top 12 by PlayerProfiler in this format. 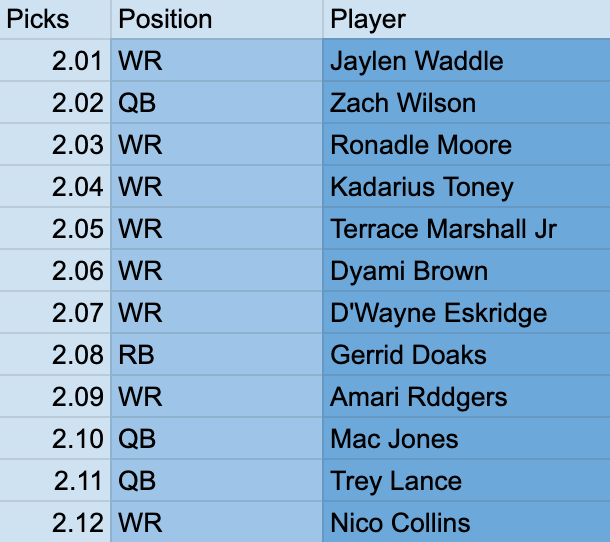 Six wide receivers were taken in the first seven picks of Round 2, with Zach Wilson being taken at the 2.03 to break that run up. I don’t love reaching on Wilson here because he is currently parked at No. 25 overall in our rookie rankings. However, I love Jaylen Waddle at the 2.01 and Terrace Marshall at the 2.05. These two receivers are jumping into roles with high target potential in 2021. Waddle is projected for 787.6 receiving yards and 6.2 startable weeks in 2021. On the other hand, Marshall jumps into a potential WR3 role right off the bat, and is projected for 72.3 targets.

After Marshall was taken, two more WRs leave the board in Dyami Brown and D’Wayne Eskridge. The most confusing, yet intriguing selection of the second round has to be Gerrid Doaks at the 2.08. Our rookie rankings have him pegged as an early-fourth round value. Moreover, competing with Myles Gaskin, Malcolm Brown, and Salvon Ahmed, I don’t see where Doaks sees playing time in 2021. After that, we see Amari Rodgers taken, which is a great value given our WR9 ranking for him.

The remaining picks of the second round primarily focused on quarterbacks.

Mac Jones is taken right before Trey Lance with the 10th and 11th picks of the round. Lance at 2.11 is among the best value picks in this draft after previously being taken at the 2.06. He is almost locked in to start a majority of games next year for San Francisco, and his rushing ability gives him QB1 upside.

Trey Lance is your New #2 QB on the https://t.co/dAxKA046QX Rookie Rankings?

The 2.12 selection of Nico Collins was one of my personal favorites of this mock. Collins has immense potential to be a WR1/WR2 in Houston. While the QB situation is still up in the air, the wide receiver room is weak and Collins can emerge as the alpha. Moreover, he had 19.7 (93-percentile) College YPR average and has a 19.5 (78th-percentile) Breakout Age. 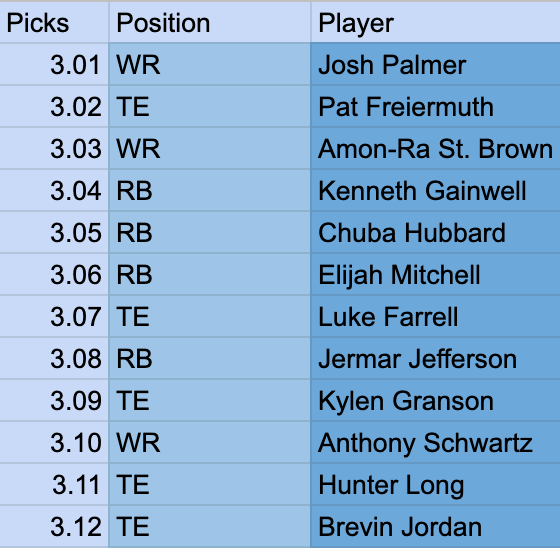 The first player to come off the board in the third round is Josh Palmer, followed by the second-best tight end in this rookie class in Pat Freiermuth. After these came two value picks in Amon-Ra St. Brown and Chuba Hubbard. St. Brown is in store for a big role in Detroit since the wide receiving corps is not strong. He has WR2 upside and the potential to have a large Target Share. In our previous mocks, Hubbard was off the board in the mid-second round, which makes this pick pretty valuable. Furthermore, he was a great player in college with a 32.6-percent (75th-percentile) College Dominator Rating.

After he went off the board, two more tight ends in Luke Farrell (an autopick due to a timeout) and Kylen Granson were taken, along with running back Jermar Jefferson. Granson is pegged as a late fifth-round value, and thus a suboptimal pick here, while we don’t even have Farrell ranked among our top 85 players. The round ended with Anthony Schwartz, Hunter Long, and Brevin Jordan. All three of these picks are at good value, with Schwartz and Long having the most. Long was a beast in his last year at Boston College, racking up 685 receiving yards with a 62.6-percent Catch Rate. I foresee a future where he has a real chance at taking the TE1 spot in Miami, and that future is not too far away.

Hunter Long led all tight ends with 91 targets in 2020 ? pic.twitter.com/Hhva5JuLxj

Jordan, our No. 40-ranked player, is slightly overvalued as the round’s final pick. However, he has a crazy amount of upside with his 18.1 (99th-percentile) Breakout Age and a 27.9-percent (85th-percentile) College Dominator Rating.

The most interesting non-TE selection of the round was Elijah Mitchell, who comes into a 49ers backfield with no true RB1. 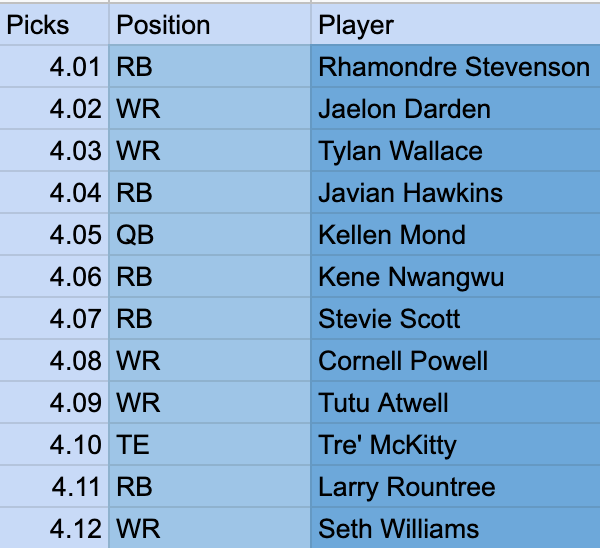 Round 4 begins with Rhamondre Stevenson, Jaelon Darden, and Tylan Wallace. I love Stevenson here and believe he will have an opportunity sooner rather than later in New England. Javian Hawkins is next off the board at 4.04 and finds himself in a pretty good situation in Atlanta. While Mike Davis was acquired this offseason, Hawkins has a lot of upside with his 6.0 (71st-percentile) College YPC average. I can see coach Arthur Smith giving him carries throughout the 2021 season. We see our first QB go off the board since Round 2 in Kellen Mond, who is my favorite quarterback in this class solely because of his potential and the fact that he’s undervalued. While he does have major developing to do, the Vikings got a diamond in the rough here, and so did Aaron with this pick.

Many of the players that went in the middle of the round are slightly overvalued according to our rankings, including Stevie Scott and Kene Nwangwu. However, my two favorite picks from this round are Tutu Atwell at the 4.09 and Cornell Powell at the 4.08. We have Atwell pegged as a late-third round value, and he was still the last Day 2 receiver off the board here. I’m also surprised Powell fell this far since he has been rightfully hyped up through minicamp.

If Powell can win the WR2 sport in Kansas City, his value will skyrocket in all league formats.

The rest of the round included players such as Larry Rountree and Seth Williams, the latter of which is a great prospect who has a lot of competition in Denver. However, if he is given an opportunity, I believe he will capitalize on it as he showed he could do in college with his 29.3-percent (88th-percentile) College Target Share. 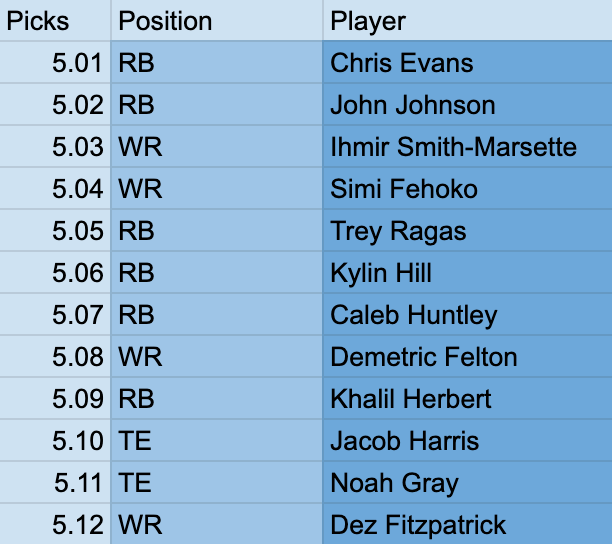 There were seven running backs that were taken off the board in Round 5, including Chris Evans, Kylin Hill, and Khalil Herbert. I love all three, and think they can see playing time in 2021. Evans has the highest probability of hitting since Joe Mixon has been fighting injury over his entire career. PlayerProfiler’s rankings prefer Hill, who has the potential to be worked into the Green Bay passing game. Assuming he makes the roster, I can see him being given opportunities since the Packers don’t have a strong WR room. My favorite pick of the last round has to be Ihmir Smith-Marsette. The Vikings do not have a clear WR3 and I predict that ISM will see lots of targets as long as defenses are focused on Justin Jefferson and Adam Thielen.

The draft concluded with two tight ends taken in Jacob Harris and Noah Gray, along with Mr. Irrelevant Dez Fitzpatrick. Gray is a great dynasty stash who he will learn from Travis Kelce. Moreover, I can see him emerging in a few years as a top tight end. Not to mention he has a 19.7-percent (62nd-percentile) College Dominator Rating and a 64.4-percent Catch Rate in his senior season at Duke.