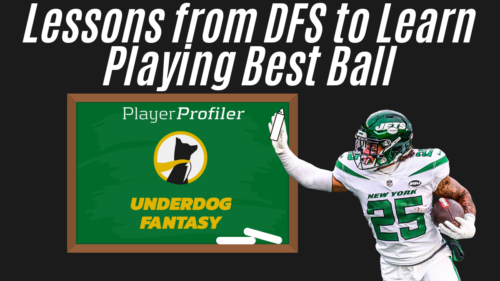 Once upon a time, fantasy football was played primarily between the water coolers of your office. Your high-stakes matchup was against Adam from accounting, and the closest you got to a tournament was warehouse Walter’s Super Bowl scratch off.

Today, there are a plethora of options, and no format is growing faster than the best ball tournament. I am one of many DFS tournament players who migrated towards Underdog’s Best Ball Mania (BBM) and The Puppy (Promo code: UNDERWORLD).

Many DFS strategies are highly applicable to these tournaments, and deciphering the areas of overlap and divergence can be key to maximizing your edge. This two-part series will cover the lessons to learn, and unlearn, from DFS when playing best ball.

Part I: Lessons to Learn

For the uninitiated, both Best Ball Mania and The Puppy are mass multi-entry tournaments where you play a standard best ball league for 13 weeks, from which two advance. The winner is decided in a three-week playoff culminating in a one-week, quasi-small-field DFS tournament for an extremely top-heavy payout. There are several areas of comparison with a large-field DFS contest.

#1: The odds of winning are so low you must hit the tails of your range of outcomes to win.

#2: The payout structure necessitates that maximizing first place equity is the only viable approach.

#3: The degree of randomness in play rewards consideration of low-probability outcomes.

To engage in process-oriented analysis you should view your entries in terms of expected value (EV): the sum of all possible outcomes multiplied by their probability. In most scenarios, your EV is equal the highest average outcome.

You have a choice between two forms of allowance:

To maximize your average return, you take the $5. But what if I modify the incentive structure?

Example: you have no disposable income, and need to purchase a $20 concert ticket for a date.

To accomplish this goal, $5 is of no use. Even though four of five times you wind up with less money, the 20-percent chance to purchase the ticket makes option B worth choosing.

This is how you need to approach tournaments in DFS and best ball. Not only do 10 of 12 teams win nothing, but the payout structure is so top-heavy that most of your expected value lies within a first place outcome you will probably not hit. You need an all or nothing mindset.

Takeaway: The expected value of your lineup is virtually synonymous with your win equity; not your expected points scored.

Now you’re in the right headspace, and it’s time to weaponize it. You are playing a tournament with the sole goal of finishing first out of tens of thousands of entries. There is little point in worrying about what could go wrong. Instead, ask yourself before each pick; what is the scenario this player helps my winning lineup? How much does it help?

If you’re drafting to win, it matters less how probable a player’s ceiling compared to how impactful it is. To illustrate this, compare the charts below: 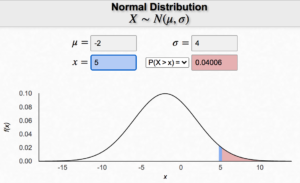 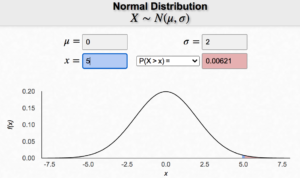 In plain language: pull any random outcome from the sample and it’s more likely the right chart’s outcome is better. However, if you require an outcome above five, the sample on the left is over five times as likely to produce it. Increase the variance, and you increase the ceiling.

Let’s do a case study for best ball:

Tevin Coleman (ADP: 176.7) is being drafted of Ty Johnson (ADP: 213.2). Coleman, who averaged 1.9 yards per carry last year, is being billed as a possible ‘starter,’ but has almost zero chance to emerge as a league-winner at this stage of his career. If you draft under the assumption of a winning lineup, how will Coleman’s eight-point ‘usable week’ help your team? Rather than fret over an injury or bust from your top running backs, seek out a potential difference maker. Take a flier on the higher-ceiling Johnson instead.

There is a misconception that stacking is about increasing the total ceiling of your lineup. In fact, it is about minimizing the number of correct assumptions one has to make to realize their ceiling. Today we make the concept crystal clear with some inspiration from Robert Frost.

You are tasked with arriving at a destination within ten minutes, to which two roads diverge (in a yellow wood).

Road A is marked by four sets of lights, each of which has a 50-percent chance of turning green or red upon your arrival. The light will remain the color it turns for two minutes. The distance between each light requires two minutes of travel time.

Road B has the same four sets of lights, but rather than turning at random, the lights are synchronized such that if you reach the first light while it is green, all subsequent lights will be green thereafter.

Of course you would choose path B. The fastest possible time to reach your destination is still eight minutes, but the odds of reaching under ten are much better with the correlated set of lights.

Takeaway: Stacking maximizes the benefit of a correct assumption

The Data Behind The Stack

Luckily, you do not need to rely on poetry to understand why stacking is so essential in best ball tournaments. Player Profiler’s Head of Analytics Josh Larky, The StacKing, recently released a Code Breaker episode which provides the data-based case for stacking.

Code Breaker Ep.10: @jlarkytweets discusses the math and theory behind the art of stacking ?

In Larky’s podcast, he calculated the rate of advancement per stack vs. the base rate from the most minimal stacks to the most correlated lineups. As you can see below, the most correlated lineups had the highest rate of advancement both in the 13-week regular season, as well as the first playoff round where two of 18 teams advance. This backs up stacking as a ceiling reacher, not just raiser.

Takeaway: You need not be faced with astronomical odds to embrace the power of correlation. 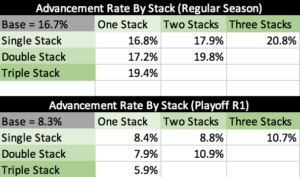 Considering the sample size of tournament-winning lineups per year (one) is difficult to draw from, analyzing a corollary from DFS can be helpful.

The DraftKings Fantasy Football World Championship (FFWC) is the best comparable. While qualifiers are determined via separate DFS tournaments instead of a best ball league, the payout structure and final week are similar. Because each entrant in the 200-person final (Best Ball Mania II is 160) creates their lineup specifically for the final week, we can isolate the intentions of elite DFS players creating an optimized lineup.

Takeaway: Correlated outcomes are easier to predict than a series of isolated events. Building lineups which benefit from correlations gives you an edge when it matters most. 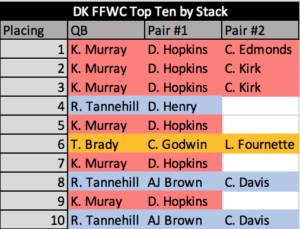 You are in Round 10 of your best ball draft and see Joe Burrow available well past ADP, so you snatch him despite having no Bengals players. Burrow has a top five season, helping vault you to the final. However, now you find yourself stuck. If Burrow performs poorly, your odds of winning diminish. If Burrow performs well, your score increases, but so do all the other entries rostering Burrow that week. The odds he hits his ceiling in a given week without a top performance from at least one of Ja’Marr Chase, Tee Higgins, or Tyler Boyd are low.

Every lineup in the final will roster players who perform well all year. Thus, the players you relied on all season will be disproportionately represented in the championship field. It’s no longer enough to have good weeks from your players. You need to have your players hit their ceiling, AND you need to derive more benefit from their games than the rest of the field.

Enter the final without a stack and your reward for advancing is a ticket to the Best Ball Kobayashi Maru.

Learn: ‘Stack’ on Your Stacks

Let’s return to the comparison with the FFWC. Of the top four finishers, each had pieces from at least two of the three highest-scoring contests. In a given week, stacking extends beyond a single team. ‘Game stacking’ works because one team scoring quickly puts the other team back on offense in pass-friendly Game Script. If this occurs on repeated drives, you benefit from a offensive snowball rolling swiftly down a hill!

In best ball, you cannot tailor your lineups to each individual week, so game stacking is harder to accomplish. But as the saying goes:

Your competition is less likely to put thought towards game stacking, giving you a greater edge.

The odds of winning a large field tournament is less than one in 50,000; but not until the last week do you need an outcome with odds beyond one in twenty. Since you are building every lineup under the assumption it is a winner, why not scroll over to the Week 17 schedule and build in some secondary correlation?

In an article on 4for4, the correlation between all fantasy-eligible positions within a given game was studied. The key takeaway is to stack passing games together for maximum benefit, while stacking running games is largely neutral. The theory of the game stack involves high-efficiency scoring, which comes easiest through the air.

Here are five games between fantasy friendly offenses taking place during the 176-person Best Ball Mania II you can build a natural game stack for without reaching ahead of ADP. Feel free to build this out from a skinny stack into a full double stack, with a ‘bring back’ if you’re able.

Adapting from large-field tournaments in DFS to Best Ball requires many of the same strategic priorities. Adopting these properly into a seasonal structure can give you an advantage over players treating the format like a redraft league. But we know it’s far from an exact transition.

In Part II of this series, I will cover the lessons DFS players need to UN-learn to dominate best ball tournaments.