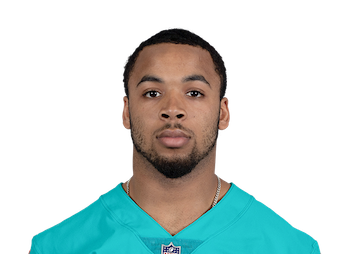 Miami Dolphins running back Myles Gaskin is coming off a ...

Miami Dolphins running back Myles Gaskin was uncertain to ...

Who is Myles Gaskin

Despite exceptional production and a solid 4.58 40-yard dash, Myles Gaskin was ignored by NFL teams. It wasn’t until the seventh round Gaskin heard his name called in the 2019 NFL Draft by the Miami Dolphins with the 234th overall selection. He wasn’t called on to do much during his rookie season, but he broke out during the 2020 season. In ten games, Gaskin ran for 584 yards on 142 carries and scored three touchdowns. He added plenty of value as a receiver as well, bringing in 41 of 47 targets for 388 yards and two touchdowns. Gaskin’s numbers would’ve been heftier had he not sprained an MCL that forced him to miss four games and then two extra games after his return. He finished the 2020 season as the RB12 on a per-game basis.

Myles Gaskin had plenty of momentum to build upon his 2020 season after the Dolphins elected not to bring a new running back into the fold, but injuries to their quarterback Tua Tagovailoa and a rough offensive line made that difficult. Gaskin set a career-high in attempts (173), rushing yards (612), and touchdowns in a season (seven; he had six coming into the 2021 season). But his yards per carry average fell from 4.1 to 3.5. His yards per reception fell from 9.5 to 4.8. He evaded just 32 tackles, 42nd among running backs. He only created 1.99 yards per touch, which finished 53rd at the position. Gaskin’s usage as a receiver was still healthy, however. He ran 239 routes, which ranked 14th among running backs. His 49 receptions ranked 8th at the position. His 10.5-percent target share was 21st. Gaskin ended up playing just 50.9-percent of Miami's snaps and finished as the RB40 on a per-game basis in 2021. He could not exceed his ADP of the RB22 heading into the season. Gaskin has one year left on his rookie contract with the Dolphins. He is clearly a capable back, but an up-and-down 2021 season relegated Gaskin to rotational back at best moving forward.