Yo, Mad Caps! Welcome back to The Infirmary; the one stop spot for fantasy related injury news. And oh, the plethora of news there is this week… But first, let’s not forget that the BYE weeks have officially begun. The Falcons, Jets, Saints and 49ers are all off this week. Well, we’re just missing all sorts of fantasy relevant players there, aren’t we? Sarcasm aside, don’t look ahead to the BYES for next week; it’ll just produce the worst of nightmares. Nightmares that will last all week long. ‘Tis the season for scares, after all. Even more frightening? To see the IR continue to pile up with key players. It’s not all bad, many are also returning from IR this week. There’s a lot going on, so let’s dive in…

The players designated to return from IR get their own section this week; there are significant names to get excited about. To begin, the Fins get their QB back, with Tagovailoa returning against the Jags in London. This offense needs a boost, and Tua’s return is just in time. Landry’s returning is a boost for the Cleveland offense, and the same goes for Hilton though he isn’t the player he once was. However, the Ravens rookie wideout Bateman is the guy to get excited about. 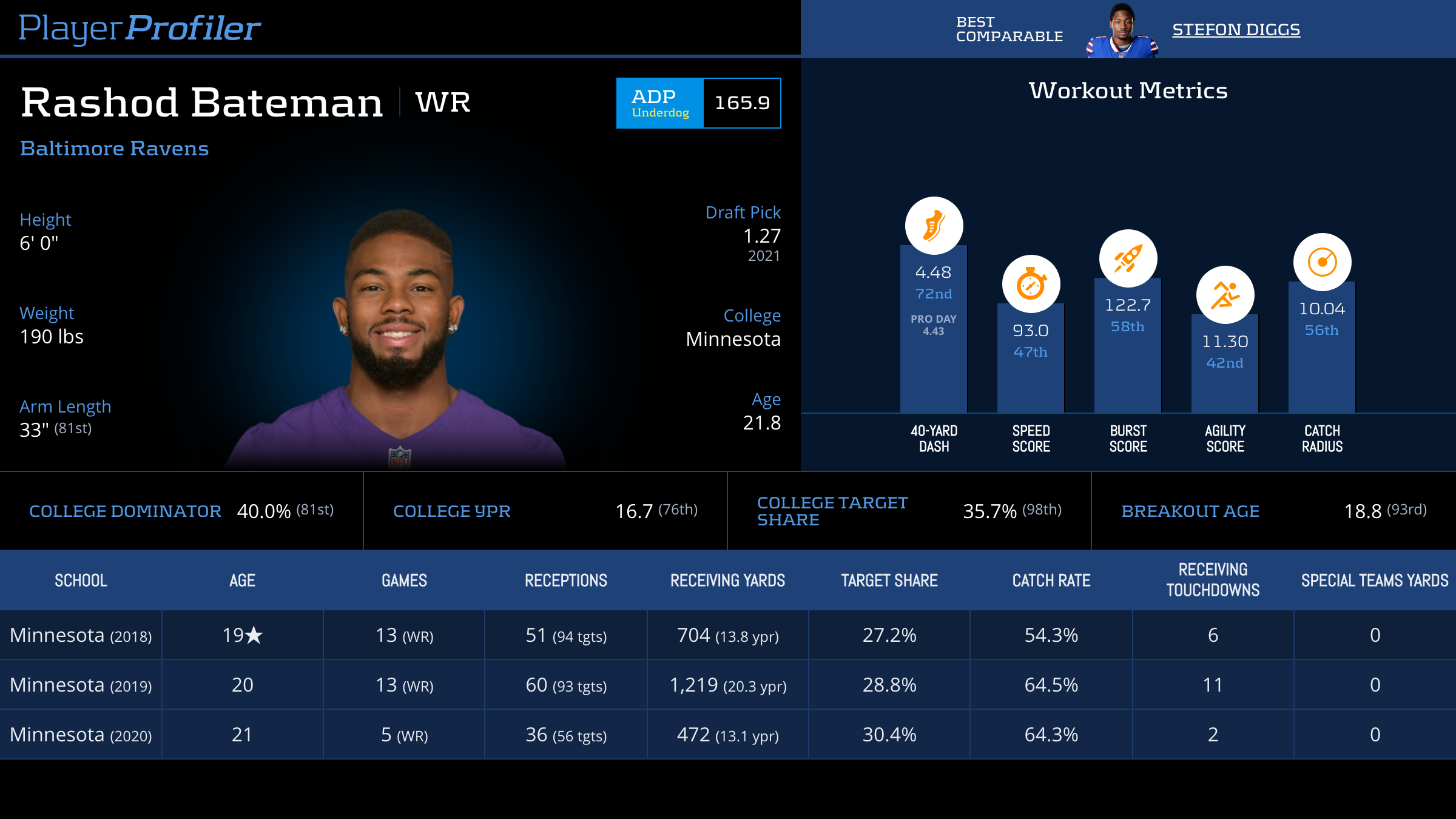 In a Baltimore offense that is now pass heavy, even if out of necessity, Bateman may be just what doctor Lamar ordered. Dude has the workout metrics, the college production and is Best Comparable to Stefon Diggs. Remember Odell Beckham‘s rookie year? Ready yourself for a bit of Deja Vu.

So much for Wilson’s MVP case this season. After undergoing surgery on his injured finger, the star QB was placed on injured reserve, along with teammates Carson and Eskridge. Wilson’s backup, Geno Smith, played well in relief against the Rams giving hope not all is lost for fantasy production from Seattle’s wideouts, Tyler Lockett and D.K. Metcalf. Sure, the Seahawks aren’t a very good overall team and Russ was carrying them, but Smith will likely be playing catchup often and therefore will be throwing the ball plenty. Things could get a little rough this Sunday night against the Steelers defense, but overall its safe to still trust those receivers.

As for Carson, his replacement is Alex Collins, who had a big game against San Francisco in Week 4. Behind him are Travis Homer and DeeJay Dallas. While the player profiles of both are intriguing, this offense just wont be the same without Russ. In Kansas City, the Chiefs face some RB issues of their own. Edwards-Helaire is set to miss at least the next three weeks leaving Darrel Williams and Jerick McKinnon to handle the load. Now, who doesn’t love “Darrel the Barrel?” This writer sure does. However, keep those peepers on McKinnon; he still has the juice to contribute to this offense, and now has additional opportunity to prove so. There’s also the Marlon Mack trade rumors…

After several seasons, fantasy diehards were finally getting the Williams breakout season. With him down, the Cards traded for Zach Ertz; all in for the Super Bowl, eh Arizona? Smith-Schuster had a big week two, but has otherwise been quite this season. Lucky for the Steelers, they always seem to be loaded at wideout. James Washington has been waiting for his opportunity. It might not make a difference in this constipated Pittsburgh offense, but he’s a solid receiver who can pop out a big game at any given time. Keep him in mind when creating those DFS lineups. Cephus is out for the Lions after beginning to make some noise in his second season. The takeaway? It’s Amon-Ra St. Brown time (or SZN, if preferred).

No Watkins? Yet another sign of the impending Rashod Bateman breakout. Just saying, not for nothing. Golladay is once again tending to an injury. Dude can’t catch a break. Toney, though? He’s about to catch all sorts of things. Mostly footballs. Hopefully, not COVID. In Washington, quarterback Taylor Heinicke is running out of pass catchers. Aside from stud Terry McLaurin, the pass-catching talent is lacking. However, DeAndre Carter is a compelling option. After a touchdown catch in Week 4, Carter went on to have a solid game last week, posting four receptions for 62 yards, adding one rush for 11 yards. He’s been around for some time, but does have intriguing aspects to his player profile. Gotta love the cheapies for DFS. 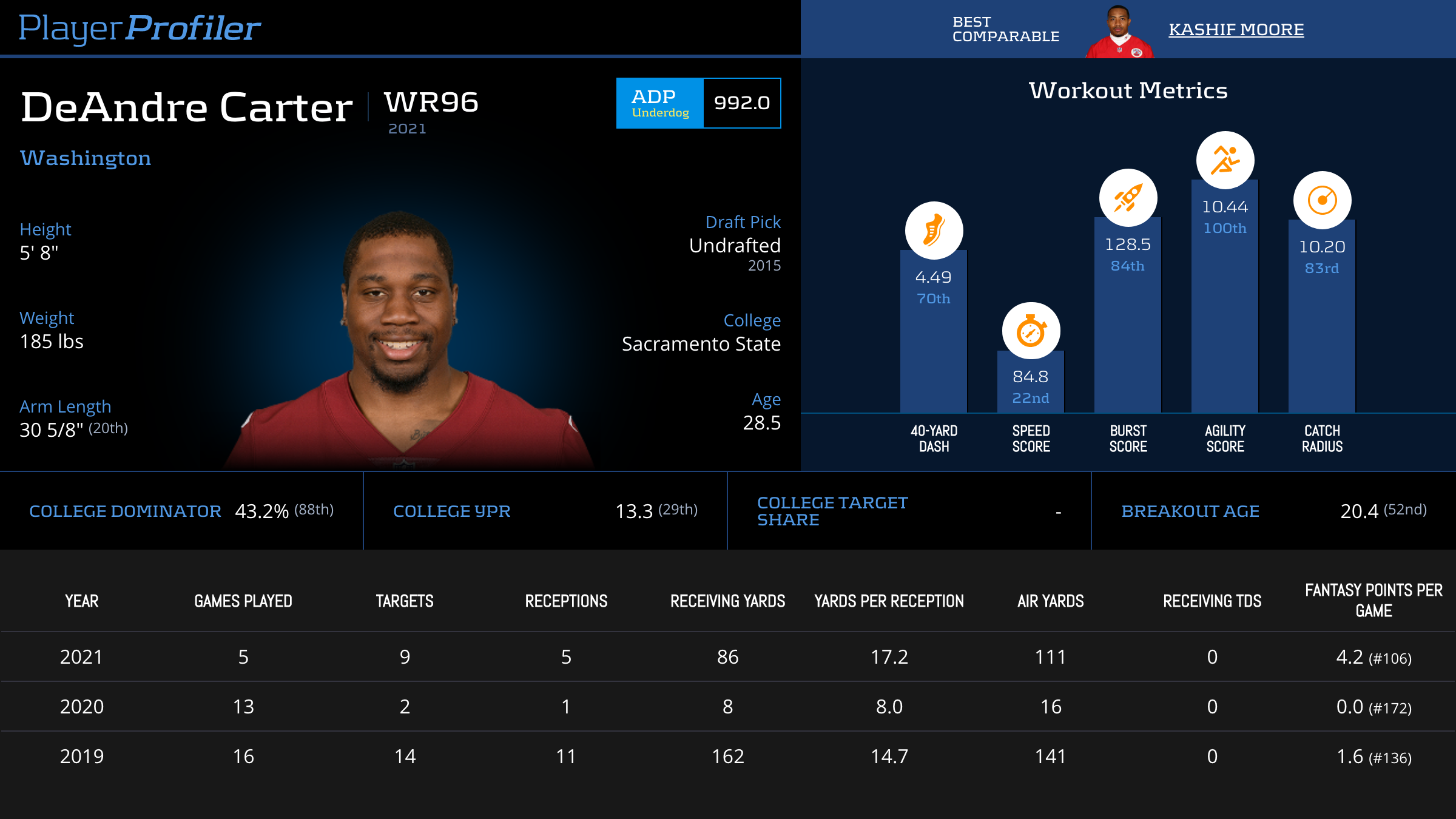 CMC will be sitting for Carolina, leaving Chuba Hubbard as the lead back once again. Yeah, yeah. He’s fine; whatever. With Chubb out for the Browns, Kareem Hunt will take the lead role if he is able to play. D’Ernest Johnson and Demetric Felton will handle backup duties Sunday, but either could be forced into the lead role if Hunt is unable to go. Felton is fun; let’s see some more of him, Cleveland. The Bears are not only without David Montgomery for the next few weeks but have also lost his backup, Williams. That leaves Ryan Nall, Artavis Pierce, and rookie Khalil Herbert, the latter of which played well last week, going for 75 yards on 18 carries. There’s no reason he can’t have another successful Sunday rushing the ball. The same goes for the Giants’ Devontae Booker, who will fill in for Barkley. He scored two touchdowns in relief last week, and could be solid against the Rams this Sunday.

The Q section this week is rather simple, since all players mentioned should suit up this Sunday. However, there are a few points to be made. Despite Gordon’s likelihood of playing today, Javonte Williams is still a guy that needs to be started this week. The Broncos are on a two-game losing streak and now face a Raiders team that is in utter turmoil. Not to mention Vegas boasts the No. 26-ranked rush defense. This is your warning; the Williams breakout is happening. If Toney suits up, he’ll continue to shine after his breakout, especially against a Rams team the Giants will likely be trailing. It helps that quarterback Daniel Jones will be on the field.

We are in for a wild Week 6, Mad Caps. London gets it’s “hometown” Jaguars after no NFL in 2020. The BYE weeks have officially begun, bringing with it the most critical period of the fantasy football regular season. The BYE weeks will test a teams depth, and separate the contenders from the pretenders (or something like that). Additionally, several key players are returning from injured reserve, and will continue to do so from here on out. It’s a great time of the year, and it looks to be a fun Sunday of football. And probably a bloody one, too. Good thing The Infirmary will always be here to report. Until next week, good luck and stay mad.