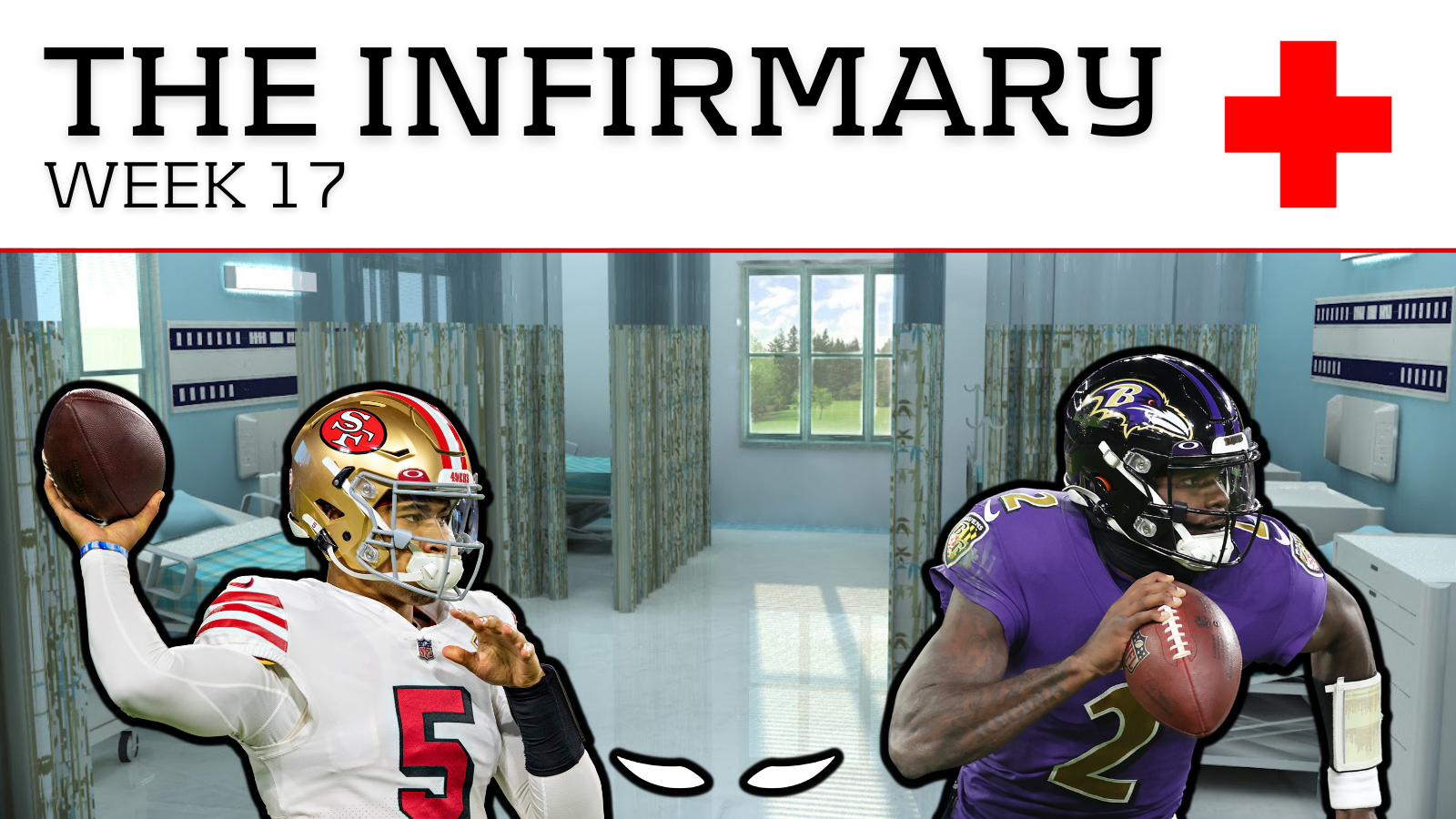 Week 17 doesn’t appear as bad as some other weeks when it comes to the injury factor, but there’s still plenty of bad news. There always is. Quarterback has taken the biggest hit this week, with a few notable ones sidelined. Ankle injuries galore and Covid chaos do their part, as The Infirmary prepares managers for the final Sunday of the Fantasy season. 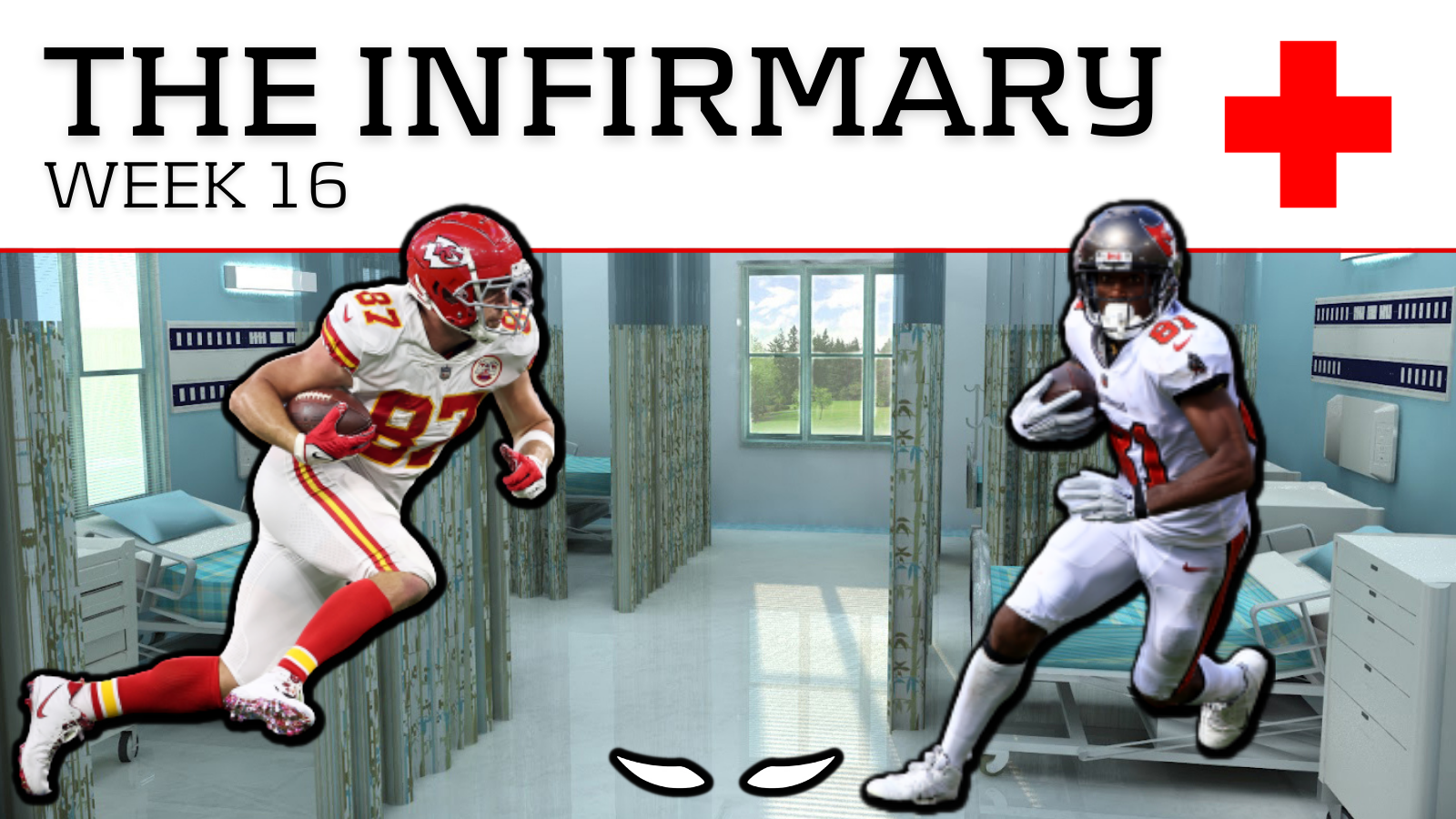 Hello to those fortunate enough to survive the first round. Can we interest you in a second helping? Yep, another week of hair-on-fire decision making and waiver wire hunting. So, grab your rabbits foot, or that lucky old t-shirt and saddle up. Oh, and get your fix of The Infirmary and it’s knowledge before heading into battle this Sunday. It will be well needed. 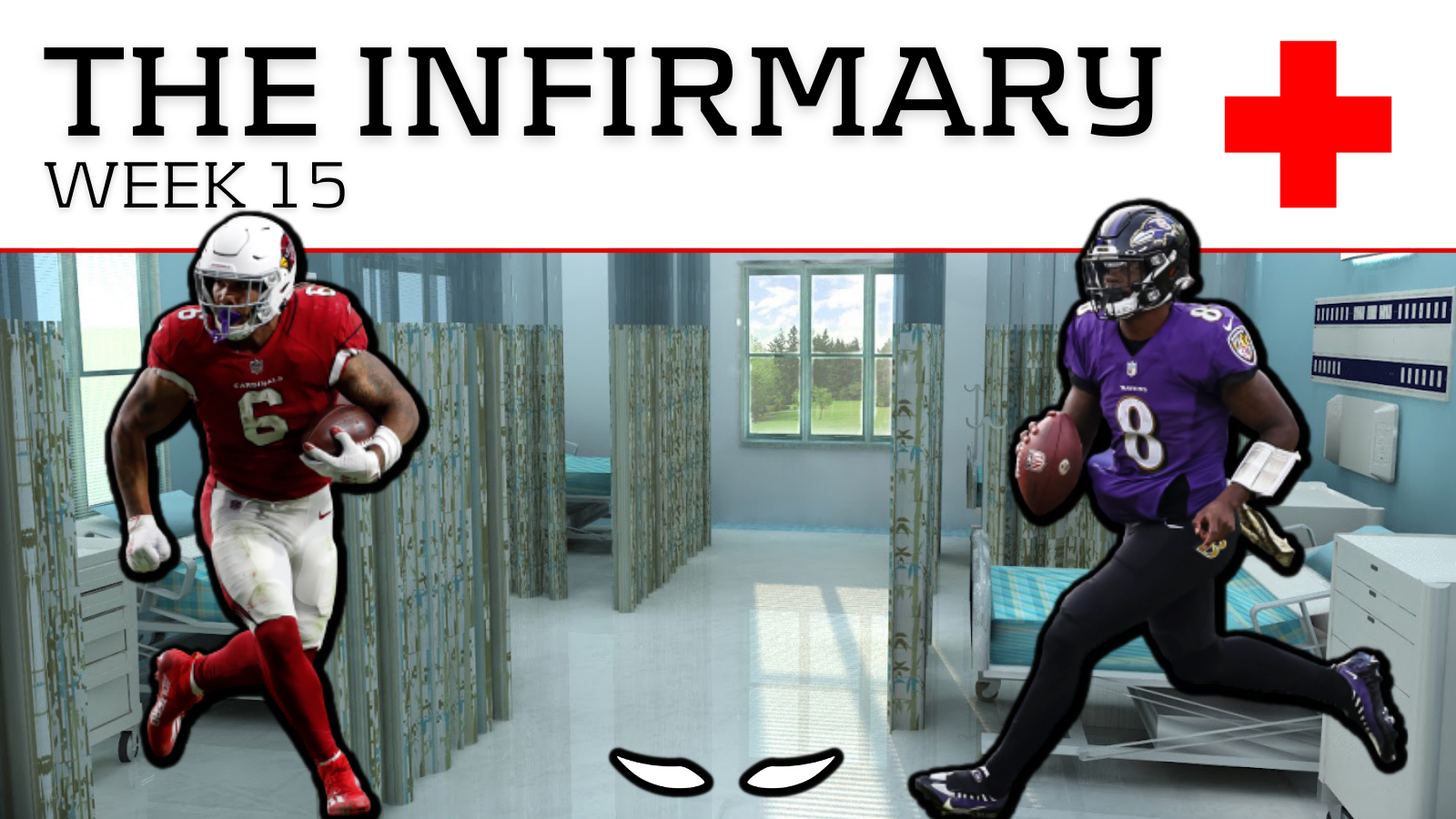 Mad Caps… Round one of the Fantasy Football Playoffs is here!!! Yet, the excitement is dampened thanks to a plethora of positive Covid tests. Omicron? How about Omi-gone? Given the state of things, that’s wishful thinking. While news is still trickling out pertaining to the Covid-racked contests, The Infirmary is here to get managers ready for Sundays action. 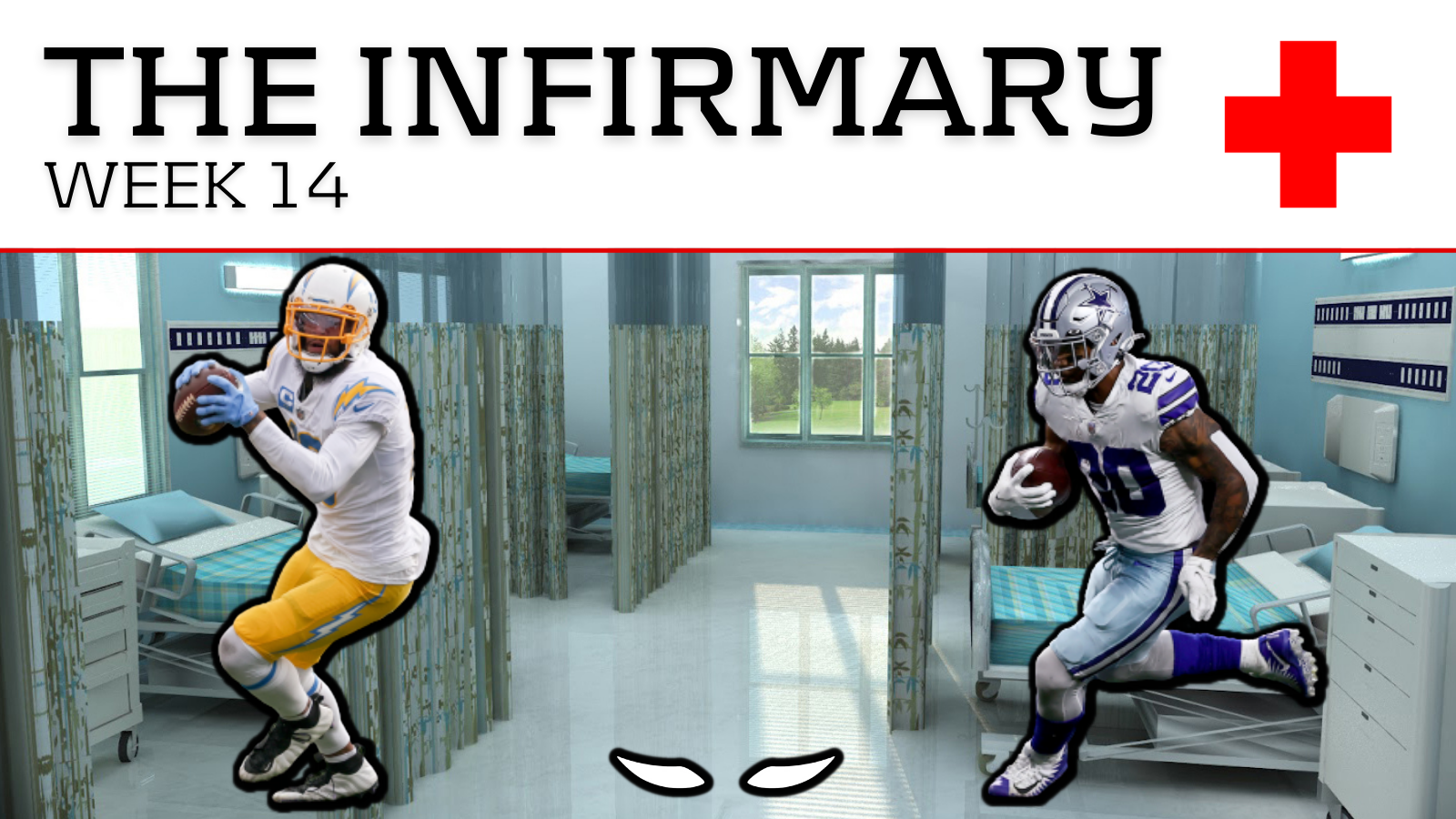 For some, the hopes of a postseason run were lost long ago; thank the fantasy gods for the little things, like DraftKings. It’s a tough final week of the regular season, and some teams will find it difficult to matchup with all the injuries. As always, have no fear! The Infirmary has gotten you this far, no reason to turn away now! 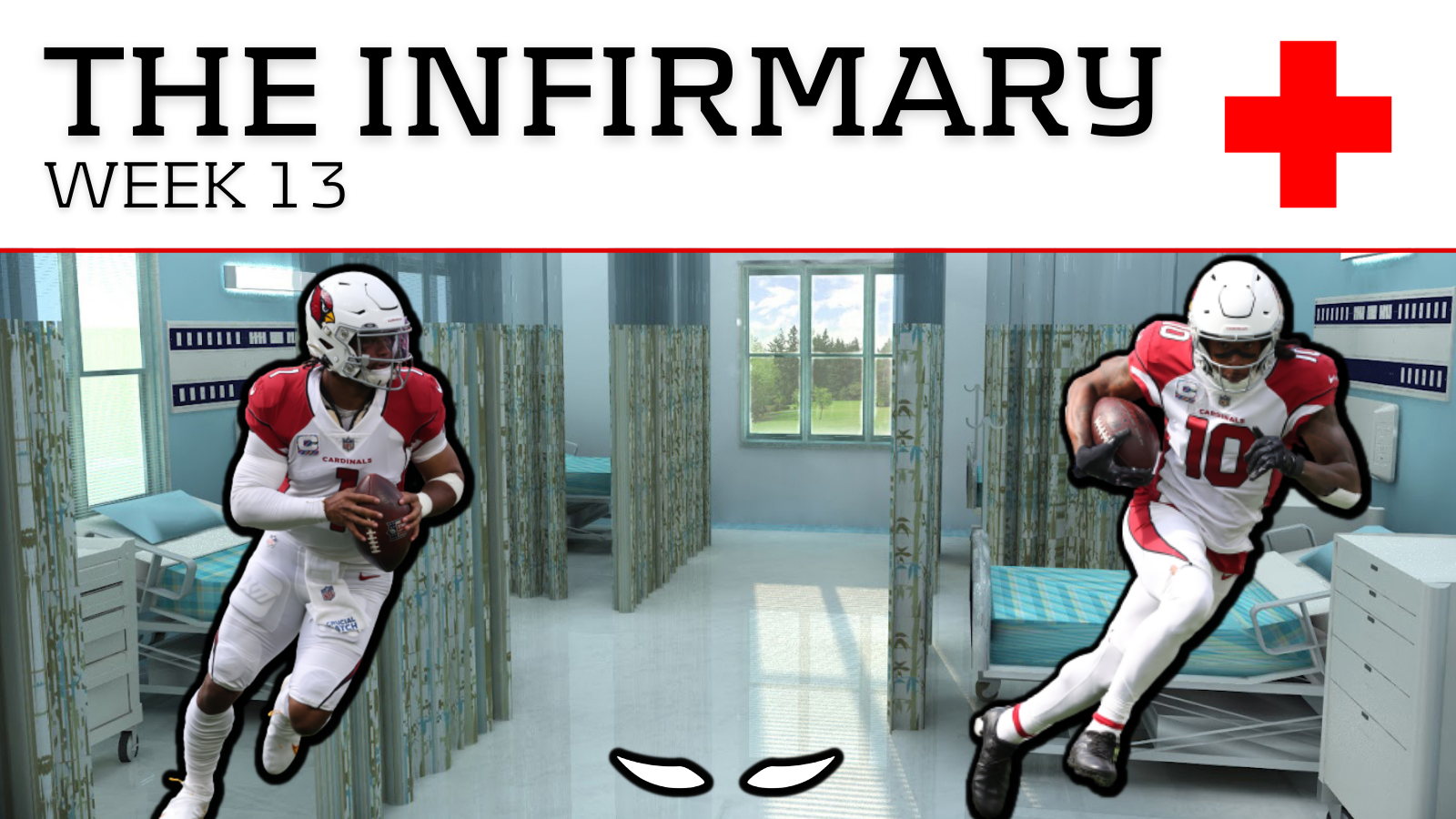 Some say the number 13 is unlucky… and perhaps it is. When it comes to football and injuries, no bad luck is needed. It’s week 13 of the NFL season and multiple high-profile names are on the list. Wether or not the accursed number has anything to do with it matters not. It’s a sport that delivers injuries quicker than Amazon delivers Christmas gifts. Speaking of gifts, The Infirmary is always here to give the gift of knowledge! 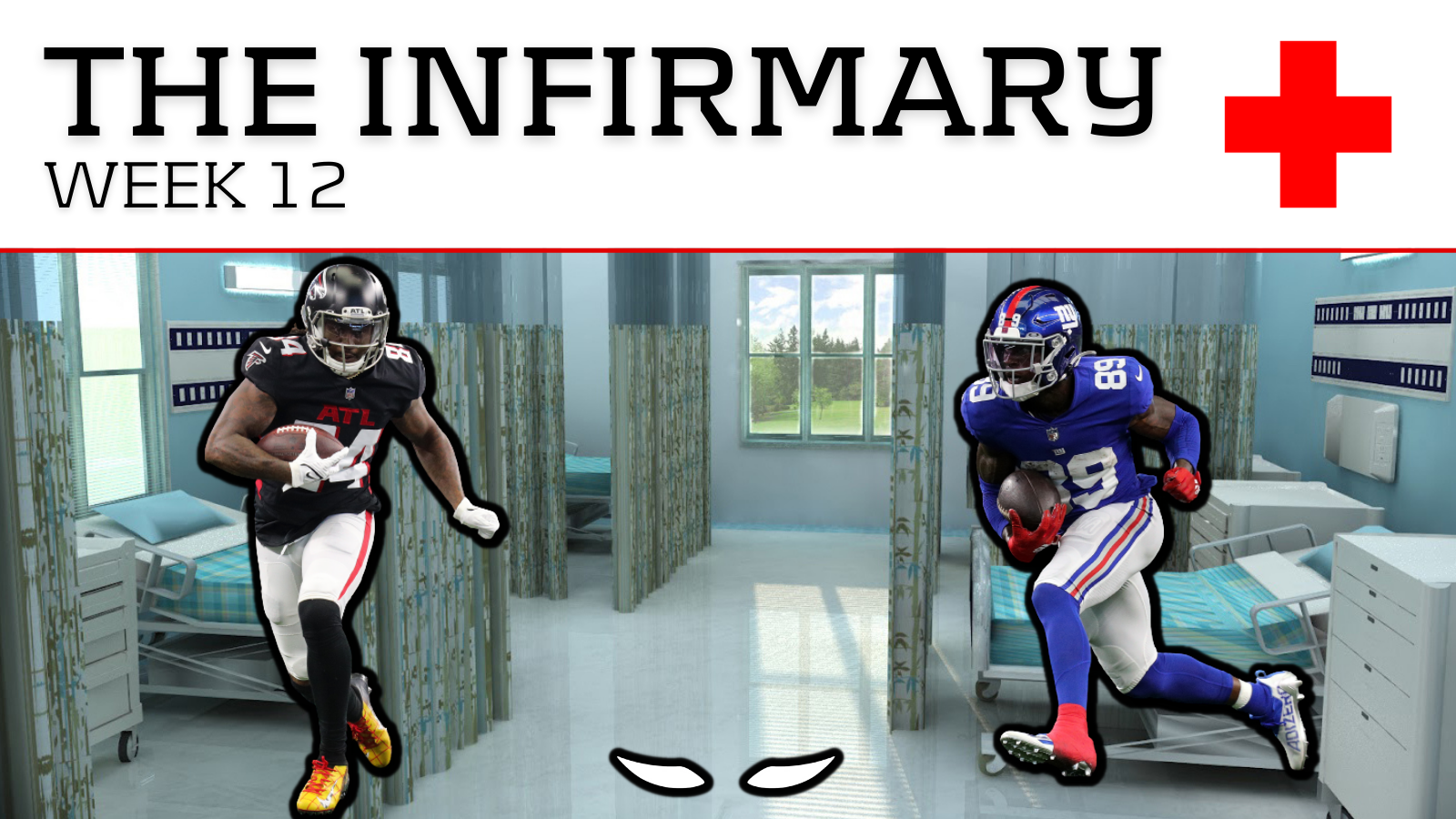 Apologies for disturbing that post-Thanksgiving coma, but there is still plenty of football left in Week 12 of the NFL season. Sunday will be much more entertaining, with some key divisional matchups and teams jockeying for playoff seeding. Heat up those Turkey leftovers, kick back and enjoy another day of bird and ball. There’s work to be done first, however. The Infirmary is a busy place. 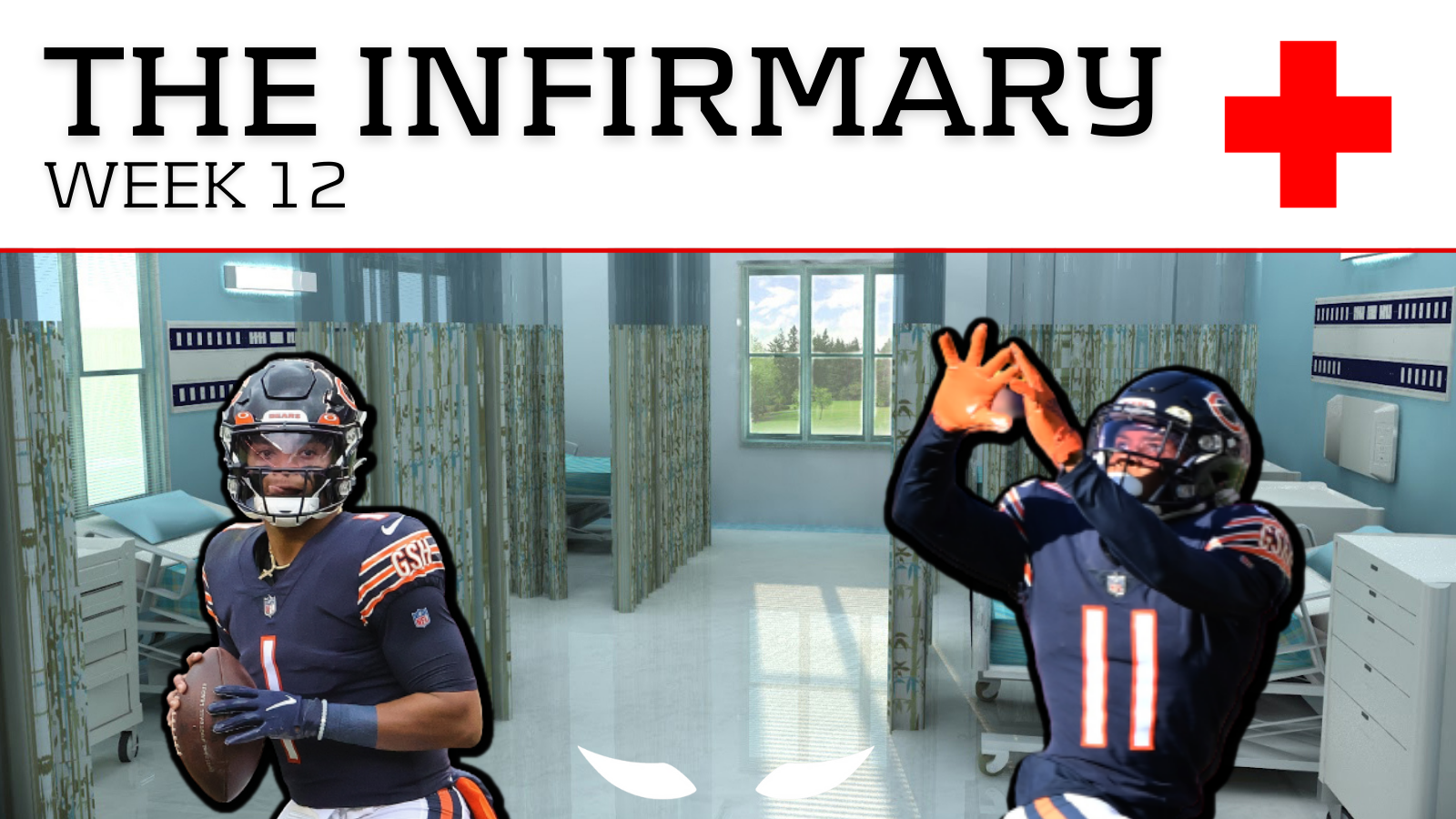 The first, and least desirable, game of the Thanksgiving slate is shaping up to be even uglier; both starting quarterbacks are likely out for the matchup. No Justin Fields on Turkey Day is a bummer, but at least we get D’Andre Swift in this one. The second year back is No. 5 in PPR scoring, and with Jamaal Williams getting work. Some didn’t think this was possible. But it is and he’s killing it; he ranks No. 4 in Snap Share at the position, and No. 1 in Targets and Receptions. Oh, and his Dominator Rating is a stellar 32.5 percent, good for No. 4 among qualified backs. He’s in for a day on Thursday.

The obvious issue here is the Cowboys receivers. Dallas did not play well last week against the Chiefs, and the injuries were certainly a part of it. They’ll have to rebound against the Raiders, and they still will be without both Amari Cooper and CeeDee Lamb. Michael Gallup led receivers with 10 Targets, but failed to capitalize. He’s had a quiet return from IR thus far, but Dallas will need him to step up Thursday, even if the run game is working well. 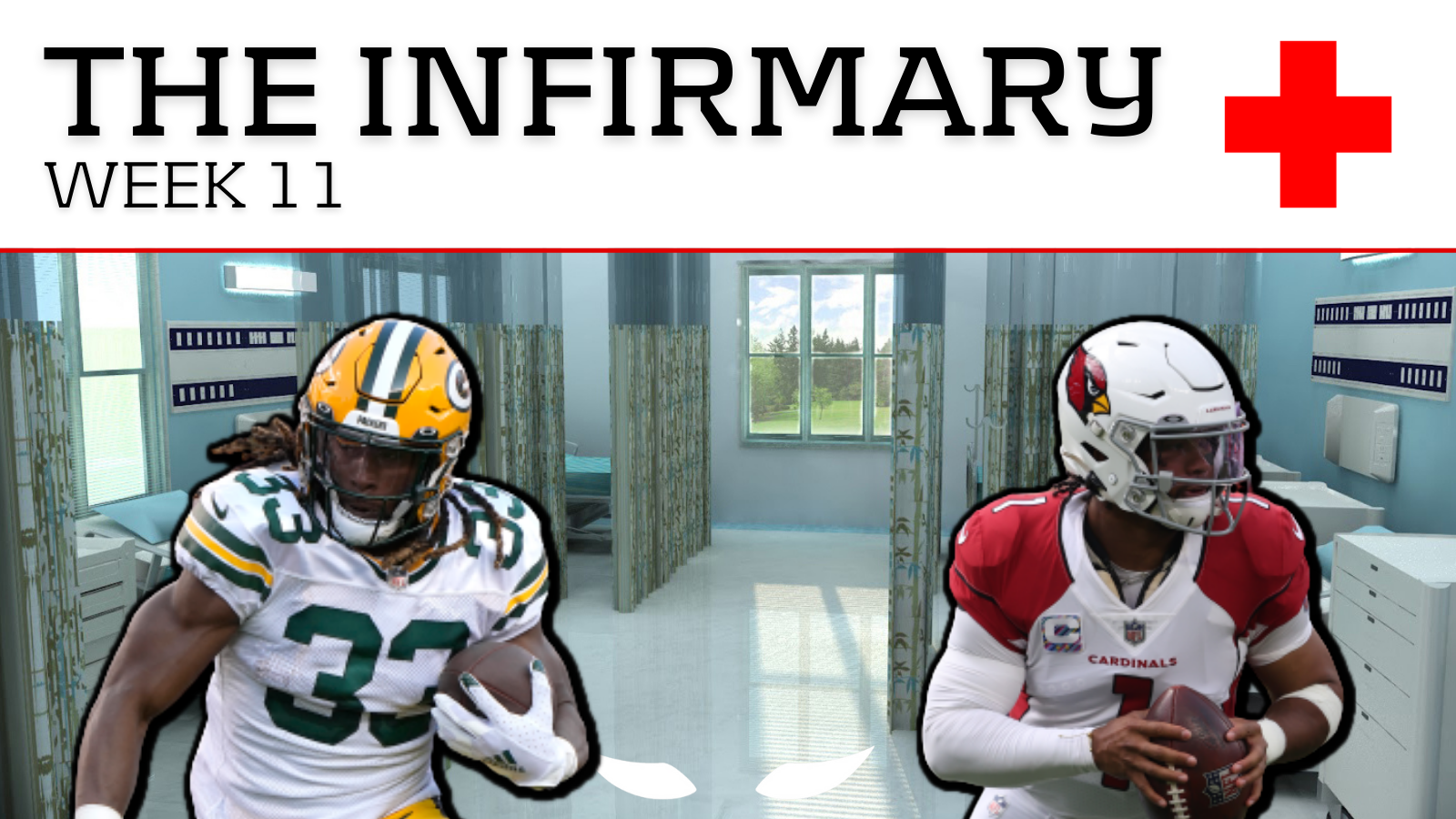 This is another one of those, “don’t rest on your laurels” check points. The payoff to the grind of it all is in sight. And in a week with a blank IR room and only the Rams and Broncos on BYE, there is still much to discuss. With both good news and bad, The Infirmary is here to provide the essentials for fantasy managers.

Rashod Bateman is primed for a big game with Marquise Brown sitting out. He’s seen a 27.7 percent Target Rate since entering the lineup, good for No. 17 at the position. Not to mention, he’s facing off against the No. 26-ranked pass defense. The Bucs will be without Antonio Brown again, and face Tom Brady’s nemesis- the New York Football Giants. This offense needs to step it up. Speaking of the G-Men, they’ll be without Sterling Shepard. Once again, it’s Kadarius Toney time. 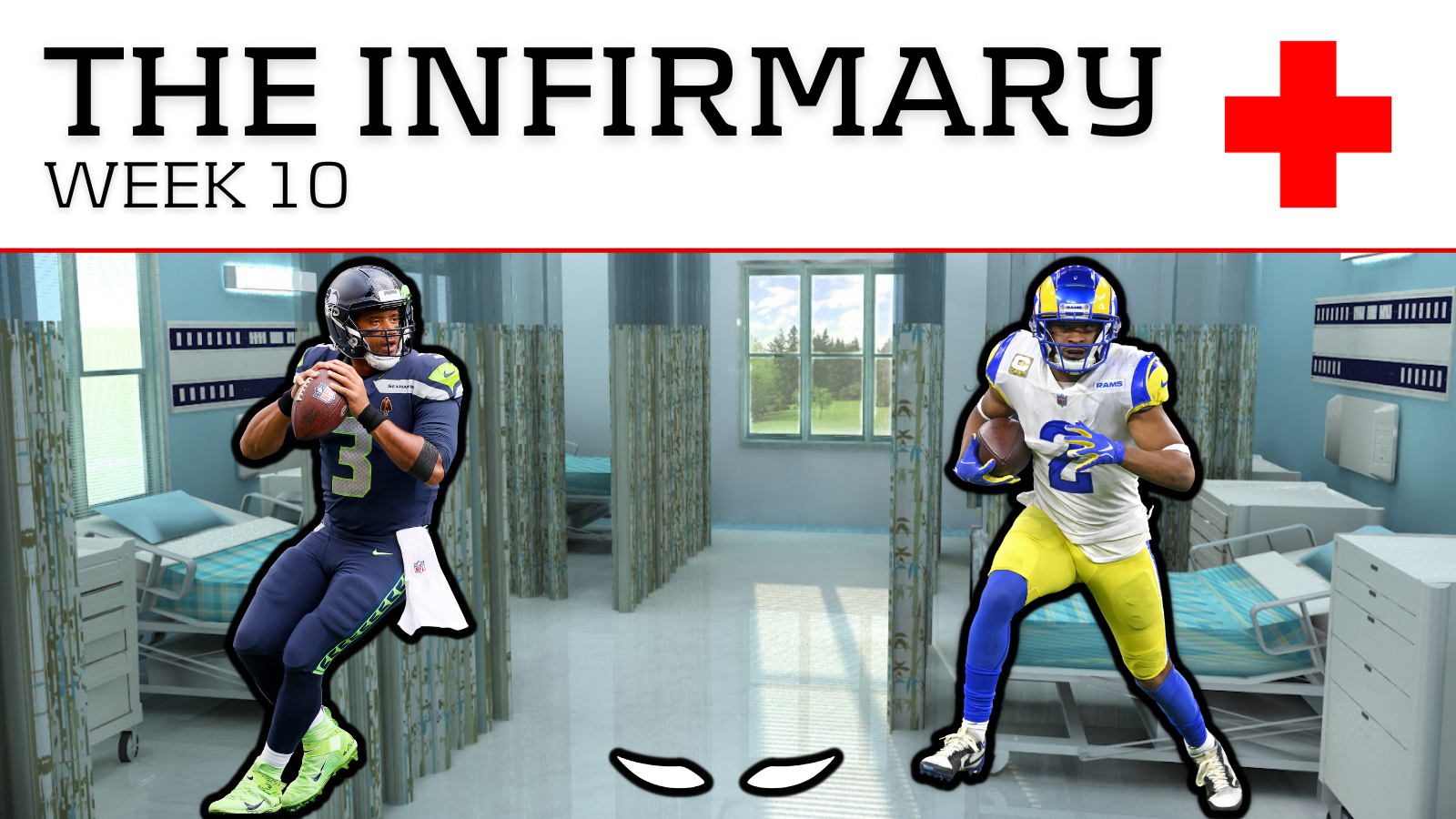 Nine weeks down, nine left to go. It’s crunch time as fantasy football leagues approach the playoffs. As for this week’s action, there’s chaos abound. Returning quarterbacks, backup quarterbacks, beat up backfields and a star wideout on a new team- this week has it all. Relax… The Infirmary has it covered!

Sure, it’s great Dallas is getting Michael Gallup back, and Scott Miller’s return for Tampa would come at a much needed time. The big news, however, is Seattle getting their signal caller back. Russell Wilson and the Seahawks are gearing up to make a run, and it‘s time to simply Let Russ Cook. It’s entirely possible; coach Carrol’s recent comments suggest he’s aware of his fate sans the great quarterback. It’s like Russ himself said – “No more pin, time to win.” 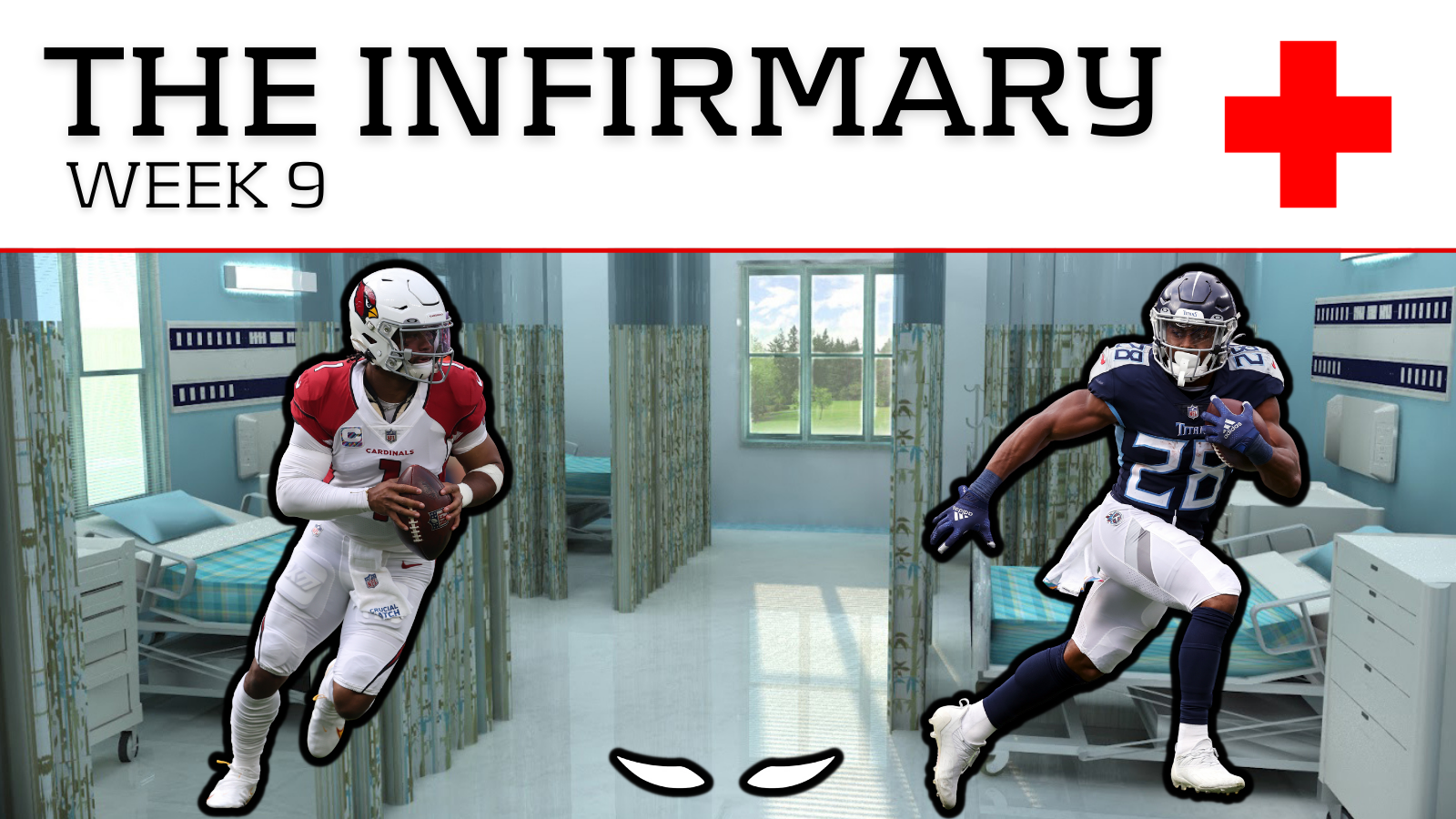 Week 9 cresembles every other week in the NFL, as far as injuries go. The exception for this week, is the reinforcements making their way back from the ole Injured Reserve. Quarterbacks are once again a highlight and the tight ends have started their own section within the injury club. No matter, The Infirmary is here to be the guiding light through these trying times.

For Jeremy McNichols truthers, now is the time. There is no direct fill-in for Henry, but McNichols will be a valuable asset for the remainder of the season. Per usual, most names on the Questionable list will suit up in the end, but there’s never a guarantee. For the Cardinals, Kyler Murray suiting up is as far from a guarantee as can be.