Patrick Worth the Price

After getting straight embarrassed by the Bills on Sunday Night Football, Patrick Mahomes and the Chiefs look to take out their frustrations on the defenseless Washington Football Team. With Clyde Edwards-Helaire already on the shelf with a knee injury, expect the Chiefs to rely even more on their passing attack in Week 6. The Chiefs’ record leaves something to be desired but Mahomes has been a fine fantasy quarterback regardless. 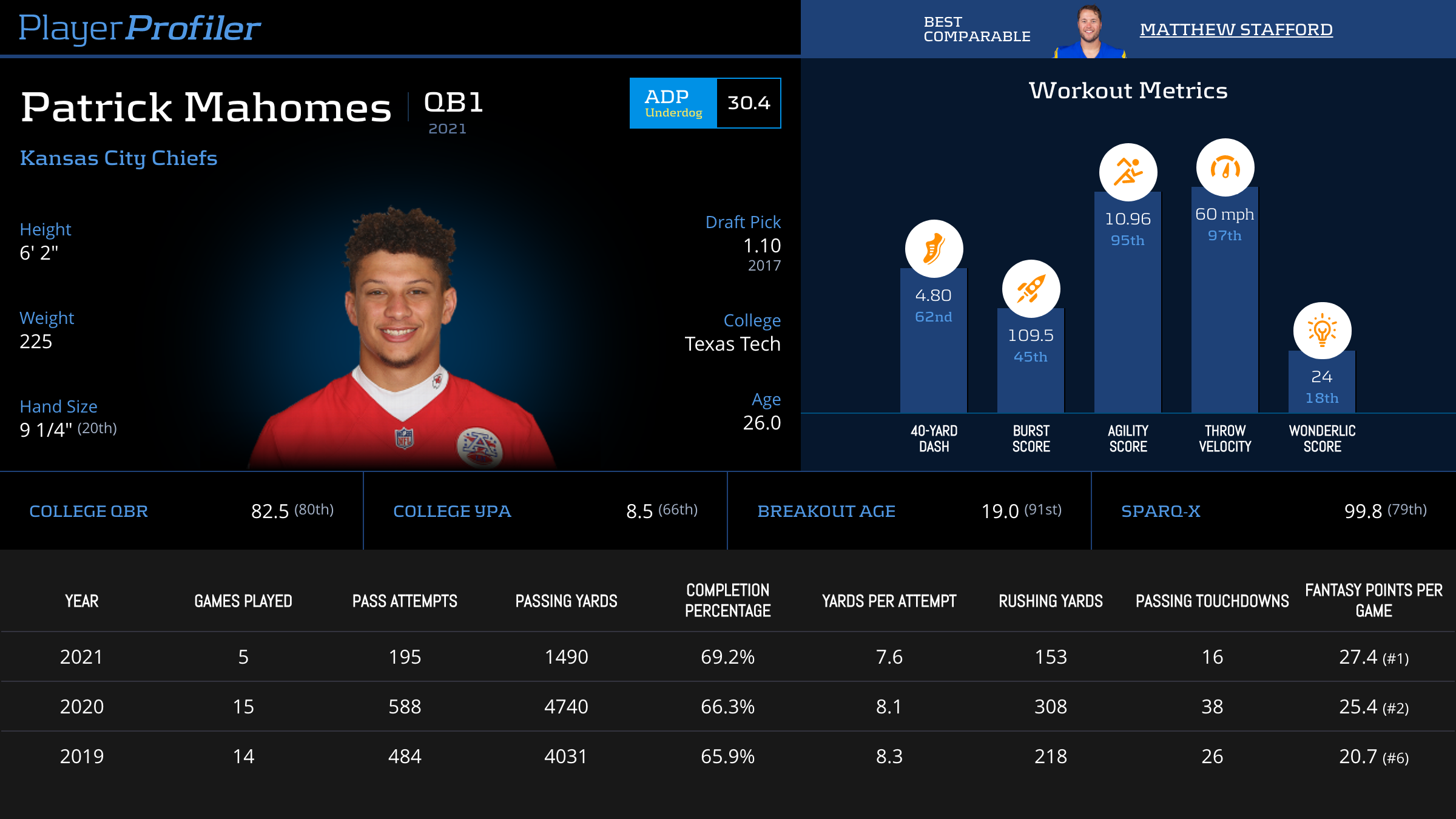 Mahomes’ league-high 16 Passing Touchdowns matches up well against the Washington defense. The Football Team has allowed 14 Passing Touchdowns (No. 2) and are the premier aFPA matchup of the week against quarterbacks. Washington and Kansas City rank No. 4 and No. 5 respectively in Pace of Play this season, so this should be an up-pace game as well. The alluring stacking option here is the Mahomes double stack with Tyreek Hill/Travis Kelce, who combine for a whopping 50.7-percent Target Share. The field probably won’t want to pay all the way up at these positions, so that should help drive down ownership. The Chiefs have a slate-high 31 Vegas implied team total.

The Rams have a massive 29-point implied team total as road favorites facing the Giants. Matthew Stafford and the offense should see plenty of looks with the Giants nursing a litany of injuries. Stafford’s 331 (No. 4 among qualified quarterbacks) Air Yards Per Game and 9.23 (No. 1) Passing Yards Per Attempt, combined with a soft matchup, makes him an ideal GPP play.

The Ravens/Chargers game should be popular, but is worth stacking anyway. Both teams proved to be shootout-worthy in their respective Week 5 contests. More fireworks could be in store in Week 6 as well with two prolific, young offenses facing off in a game boasting a strong 51.5 (No. 2) Vegas total. Lamar Jackson has been getting it done on the ground, leading all quarterbacks with 11.2 Carries Per Game and 68.2 Rushing Yards Per Game. Justin Herbert leads in Attempts Per Game with 41.4, which outlays the type of offense the Chargers run. The Justin Herbert/Austin Ekeler skinny stack with a Mark Andrews runback piques my interest here.

With A Little Help From The Ravens

Austin Ekeler has been a force this season. His 2021 achievements include a 67.6-percent (No. 13) Opportunity Share, 7 (No. 1) Total TDs, and 5.0 (No. 8) Targets Per Game. With Derrick Henry off the main slate and health concerns with studs Christian McCaffrey and Dalvin Cook, Ekeler becomes the clear cut top option at running back.

The spot to attack this Ravens defense has been through the air. They have allowed the seventh-most aFPA and 68.4 receiving yards per game to running backs (No. 2). Given Ekeler’s 15.89 (No. 7) Weighted Opportunities Per Game, he’s the safest bet to succeed amongst the stud running backs.

At just $6,000, Darrell Henderson is somehow a value play. “HenderSZN” was a little unexpected given his lighter usage in spot starts last season. However, he has established himself as a true bell-cow, even logging an unreasonable 79.9-percent Snap Share (second only to Najee Harris). The Rams should score with little resistance against the Giants, who have also allowed 29.4 DKPt to opposing rushers (No. 7).

The Chiefs have been unable to get any sort of production from their running game so far this season. It’s not likely to change Sunday either with Clyde Edwards-Helaire out and Darrell Williams expected to get the start against Washington. While Williams’ bargain price ($4,900) and expected role puts him in play in tournaments, the true leverage is including him in game stacks or fading him all together.

The Chiefs wide receivers get the best aFPA matchup on the Week 6 slate. Washington is allowing 207 receiving yards per game to wide receivers (No. 4).  While Mecole Hardman is certainly in play after seeing 12 Targets in Week 5, the player you want to jam in here is still Tyreek Hill. He has stayed Mahomes’ preferred deep threat this season, evidenced by his 40.9-percent Air Yards Share and 28-percent Target Share. This is easily the top stack of the week.

Tyreek Hill torched the Eagles and posted his best game of the season Sunday⭐️ pic.twitter.com/Z1WRJoIaeI

The wide receiver position is again stacked at the top. After a profitable Week 5, overweighting the field on Davante Adams‘ ownership is again the path for success. Per @JoshADHD‘s Premium Usage App, Adams leads the league in Targets (61), Target Market Share (38-percent) and Air Yards (728). PFF also grades Adams’ matchup against the Bears as third-best. Despite his lofty $9,000 price tag, he still has tournament-winning 5x upside (see last weeks game log). One way to differentiate your Adams lineups is by including Randall Cobb or Allen Lazard with Aaron Rodgers in a stack, but I’m fine to run him solo too.

Salary relief will be super important this week in order to fit in all the high priced studs. One interesting punt is Cobb priced down at $3900. With Marquez Valdes-Scantling sidelined by a hamstring injury since Week 3, Cobb and Lazard have seen the most snaps amongst the Packers’ receivers. In this two-week sample, Lazard has played on 82-percent of Packers’ snaps and Cobb has played on 51-percent. While both will be in my player pool because of their high Snap Share, the razor-thin tie breaker here (since we’re essentially touchdown hunting) is Cobb given his double-touchdown performance from two weeks ago.

Mark Andrews is a shocking value play after eviscerating the Colts in Week 5. His $5,200 salary doesn’t seem to match up with his elite usage. His 23.0-percent (No. 3) Air Yards Share, 24.51-percent (No. 2) Target Share, and 86.82-percent (No. 2) Route Participation is top-notch. The opposing Chargers’ elevated situation neutral Pace of Play (No. 5) and offensive success has forced teams to pass the ball more. The Chargers are No. 10 in aFPA and tied for the most touchdowns allowed to tight ends (4). If you fade Andrews, you’re just kooky.

Ricky Seals-Jones was slotted into a near every-down role in relief of Logan Thomas in Week 5. Washington’s new starting tight end saw a 19.5-percent Target Share with a 99-percent Snap Share. He’s simply too cheap ($3,000) for the role he’s seeing. Take advantage of this obvious mis-price.