The DFS Week 7 matchups are going to be on point. Traveling in Week 6, I had some issues. Limited WiFi, slow computer; it wasn’t working. When I don’t put together a piece I feel confident in, I won’t publish it. Every week I strive to give you the best matchups to attack, and if I don’t provide you with 100-percent, I’m not going to give you anything at all.

So I’m coming extra hard during the Bye-pocolypse to swing for the fences in what should be one of the most exciting weeks for DFS.

With the Bills, Cowboys, Jaguars, Chargers, Vikings, Steelers, Broncos, Browns, Colts, 49ers, Saints, and Seahawks all off the main slate, most would think it creates opportunity. However, for this week, in particular, I believe it establishes chalk. A combination of matchups and injuries limits the opportunities.

How many people are pivoting to J.D. McKissic after limited snaps by Antonio Gibson in Week 6? You better believe they are running it back with Aaron Rodgers and Davante Adams. Sprinkle some Terry McLaurin and Ricky Seals-Jones. Or keep it on the Packers side with Marquez Valdes-Scantling or Allen Lazard.

As for the Chiefs-Titans game with a 58 (!) over/under. Patrick Mahomes, Tyreek Hill, and Travis Kelce. Who will they choose to run it back? Let’s say it together: Derrick Henry.

Do I need to mention Kyler Murray at Houston with DeAndre Hopkins? People are going to get cute and say, “play contrarian with James Conner.” Lots of people will be doing just that.

So I will hit on some of the chalky matchups; However, I will find the hidden gems within. Meanwhile, I’ll close out this article with some gems from matchups I’m not attacking heavily to try to escape the chalk.

Fact to Know: The Chiefs have been putrid against running quarterbacks, allowing the most yards and touchdowns. However, it’s not as simple as it looks. They have faced the top three rushers in the league in Jalen Hurts, Lamar Jackson, and Josh Allen. The Chiefs are allowing 5.9 yards per carry and 6.67 attempts per game. Meanwhile, Ryan Tannehill is rushing for 7.0 yards per carry and 3.2 attempts per game. Tannehill needs a touchdown to be relevant on the ground.

The injuries to both of these teams are the big stories here. Tyreek Hill played through his injury in Week 6—although he did miss time. Travis Kelce left the same game briefly for a neck injury. The entire Titans secondary is in shambles.

This would be the perfect opportunity to sneak in some contrarian plays. 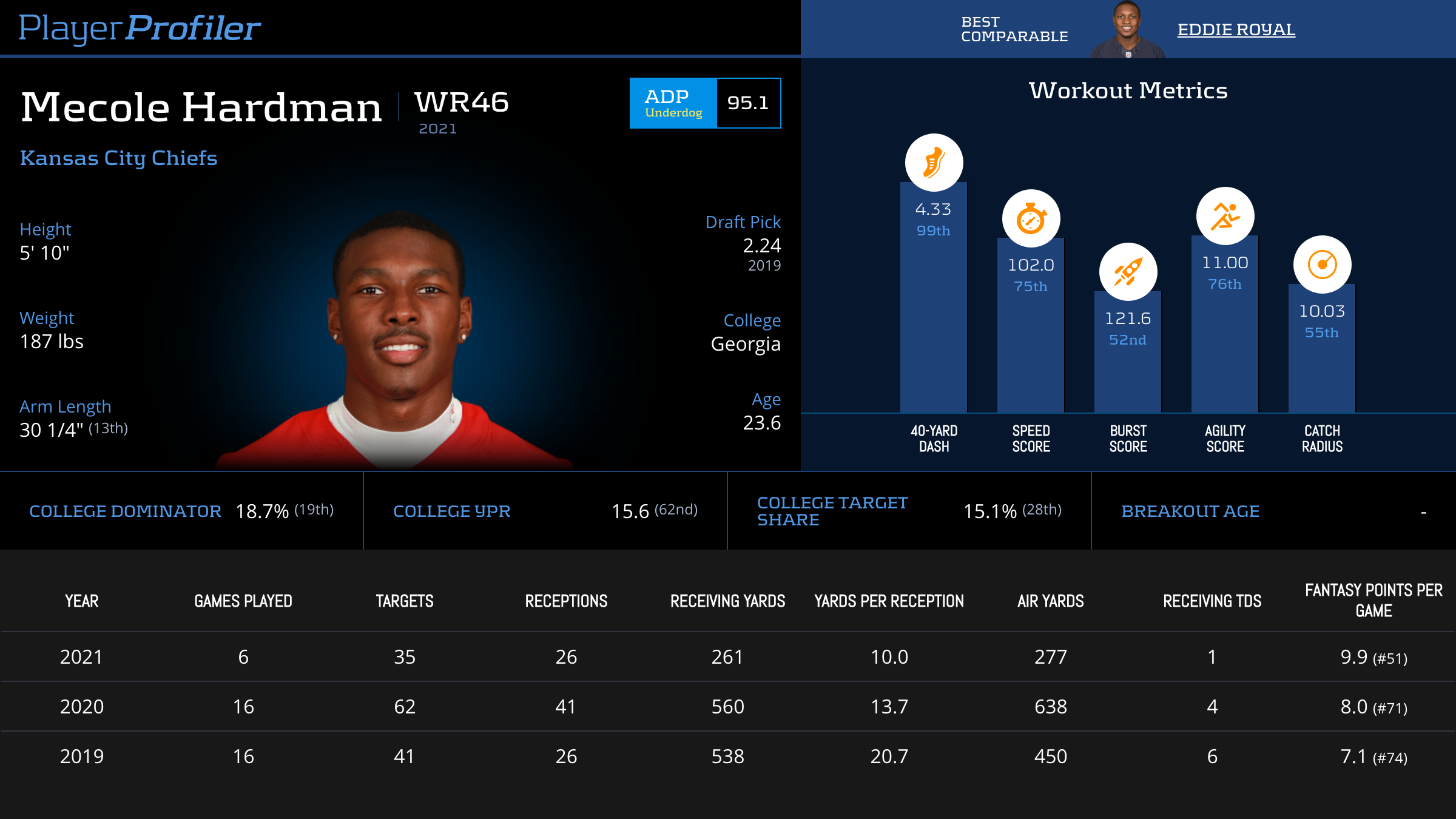 Of course, Patrick Mahomes stacked with combinations of Hill and Kelce will be popular, and I’m not suggesting to fade them. However, lineups with Mahomes, Darrel Williams, and Mecole Hardman could make for an exciting turnout. Hill has hit on a 50-percent ROI thus far. If the Chiefs go up early, we could see a week where we could have pivoted to another player and seen variance from Mahomes builds.

As for Kelce, he hasn’t had a differentiating performance since Week 2. He had seen four straight weeks of cost drops until this one. However, I do expect roster percentages to be slightly lower than what’s projected. The neck injury and the Titans defensive ranks against tight ends could scare people off, but it really shouldn’t. The Titans haven’t played any tight ends of note. Regardless, I’m not going to be over the top on Kelce.

If I fade Hill and Kelce and look other places, Hardman and Williams are sexy options to pair in tournaments. Following a 23.9 point performance against Washington, Williams could continue to command touches if they are trying to keep Derrick Henry from wearing down the defense.

The Titans aren’t facing many rushing attempts because their secondary is dreadful, but Williams doesn’t need volume at $5,800 in a 58-point over/under. He just needs a couple of touchdowns. The Titans have allowed five rushing touchdowns in six games.

Hardman should have a field day in this one. They are now utilizing him all over the field and none of the Titans defenders can stay on the field—not that it matters because they have all been putrid. Janoris Jenkins will likely be getting torched by Hill all day, but in the off chance he doesn’t, it leaves Hardman with a buffet of roasted meat to feast on. 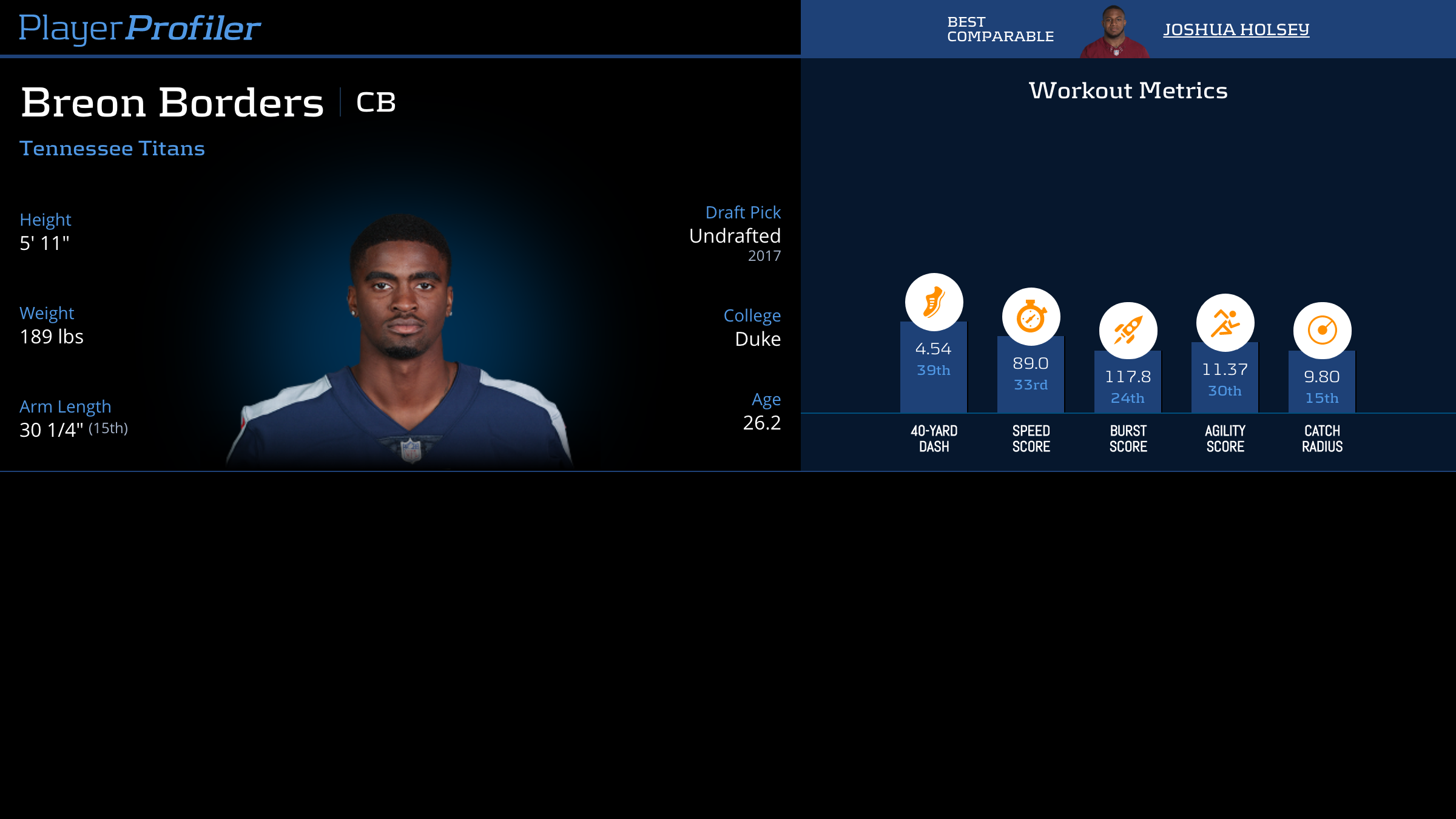 Breon Borders and Elijah Molden have been a constant target in these columns and will continue to be against hyper-athletic pass catchers.

On the Titans side, I don’t know how you get away from playing Henry. The Browns and Ravens were the only two run heavy teams the Chiefs faced and they combined for 260 yards rushing and four touchdowns. I would find a way if Jeremy McNichols played, but he re-aggrevated his ankle on Monday Night.

Maybe Henry doesn’t get the touchdowns. Maybe he turns in an average performance. Or maybe A.J. Brown steals the show and gives you 200 yards receiving and three touchdowns. With Henry’s price, you can’t play both unless you think Henry can get six to eight catches to make up for the touchdowns Brown would accrue. In a case where you played both Tannehill would be an auto-start.

Fact to Know: Cooper Kupp is on pace to the highest Target Rate since PlayerProfiler started tracking in 2016. He also leads the NFL in almost every statistical receiving category.

Did DraftKings pricing mess up or what? Sure, Darrell Henderson is the fifth-most expensive back on the slate, but at $6,600, he’s an auto-start across 50-percent of my lineups in Week 7. Look for him to get involved early and often.

Matthew Stafford and Kupp stacks are somewhat obvious as a go-to. However, I do want some shares of the Lions offense. I’m hoping Dan Campbell and company finally learned they have to get Swift more involved early in the game, but you can’t bank on coaches doing the right thing. Just look at the Eagles and Miles Sanders. However, this would be the perfect week to get Swift involved.

The Rams struggle in coverage underneath giving up 28 receptions and 211 yards with one touchdown to running backs over the past four weeks. 13.8 fantasy points per game in the air alone. Swift struggled to get involved in Week 6, but he did see 8 of his 20 opportunities on the last two drives. Hopefully, they have him involved in the passing game sooner as they could be down early against the Rams.

I’ll also be on board with not only T.J. Hockenson, but Amon-Ra St. Brown as well. As mentioned above, they struggle against pass catchers underneath so either one could rack significant points from receptions if Goff is halfway decent. Now, don’t play all three pass catchers in the same lineup, but target some dual combination of the three.

There aren’t many more contests I’d like to tackle but there still are small player groups I’m attacking. Certain matchups, roster percentages, and usage levels will play a part.

The Falcons have a 2.37 (No.30) DOCE Score while allowing 11.6 (No.26) Fantasy Points Per Game to pass catching running backs in the air. Myles Gaskin is volatile but his boom weeks can win you a boatload of money.

Isaiah Oliver was a slot corner who ended up on this report almost weekly. After his torn ACL, Avery Williams has taken over and he might be worse. He didn’t play in Week 5 and still could miss Week 7, but regardless, Jaylen Waddle has a tremendous ceiling and should be considered in multiple lineups.

Running it back here with a tight end who might not get as much attention this week. Miami struggles against big plays to the tight end and Kyle Pitts has the ability to deliver. I expect them to put extra emphasis on covering Cordarrelle Patterson and Calvin Ridley, so look for Pitts to have himself a big game.

I didn’t want to put the Bengals-Ravens game into the games I’m attacking because there’s only a few players I’m willing to play at a time from this matchup. Joe Mixon is a lock for me and Lamar Jackson could be fun. However, I don’t see this game exploding into multiple fantasy options. The majority of the pass catchers will be fill-ins pending leftover salary.

Tampa is allowing 28 (No.30) explosive passing plays this season and Mooney is playing the most snaps, running the most routes, and seeing the most targets for the Bears wide receivers. His conversion rate on targets is also the most for anyone with over 15 targets. He’s caught three of his five deep balls and expect it to double this week.

Washington has been brutal in all aspect for 2021. They are giving up a 1.9 (No.25) DOCE Score and 13.3 fantasy points to pass catching running backs. I know it’s counter intuitive to think Dillon is a pass-catching running back, but in the games he has qualified, he has registered a 1.7 out of a possible 2.7. In addition, if Green Bay goes up big Dillon could easily see more snaps at running back. Dillon seems more like a cash game play but there’s opportunity in tournaments.

Good Luck to everyone in Week 7!