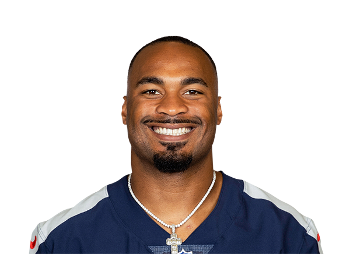 Who is Robert Woods

Drafted by the Bills, Robert Woods never went for more than 699 receiving yards in any of his four seasons at Buffalo, but during the 2017 offseason he signed a five-year $34 million deal with the Rams which led to a major swing for his career trajectory.

Things didn’t click immediately for Woods in Los Angeles, as his 2017 season in a lot of ways looked similar to his first four years in Buffalo, but he did post a career-high in receiving yards (781). In 2018, however, Woods’ development began to take shape, as he broke out with a receiving line of 86-1219-6 on 130 targets, while also showing ability as a runner by rushing 19 times for 157 yards and another score. In 2019 Woods would go on to have another 1,000-yard season, and just missed the mark in 2020 when he finished with 936 yards. Following the 2020 season, Woods signed another four-year $65 million contract to keep him with the team through the 2025 season.

In five years with the Rams, Woods has been one of the better values in fantasy football. He has never finished below WR19 in fantasy points per game, and had a fantasy ranking of WR12 season in 2019 when he averaged 15.5 fantasy points per game. One way that Woods adds value for fantasy managers is through his usage on the ground. While he isn’t used quite like Deebo Samuel is for the 49ers, Woods has totaled 70 carries for 485 yards and five touchdowns during his time with the Rams, good for a 6.9 yards per carry average. On any given week he could unexpectedly find the end zone through the air, on the ground or both.

Woods suffered a torn ACL during practice following a Week 9 game against the Titans which promptly ended what was shaping up to be another solid season. Through nine games, he had caught 45 passes for 556 yards and four touchdowns and rushed for another 46 yards and a score. Woods totaled 561 air yards, on 293 routes run and dominated in snaps by finishing with a 93.7% snap share. Woods finished 29th in total target share (21.5%) and was on pace for 363 YAC. He was also on pace for a career-high in drops after dropping 11 passes in just nine games.

When it came to receivers gaining separation, Woods was one of the best as he averaged 2.17 yards of target separation, which was good for fifth best. He also earned a wealth of red zone targets on the year (16) which was good for 16th most amongst wide receivers by the end of the season, despite the fact that he missed eight games due to his injury.

That Week 9 game ended up being the last time Woods put on a Rams uniform. After the Rams signed Allen Robinson as a free agent, Woods became expendable and put the Rams in a hard spot. They eventually traded him to the team of his choosing: the Tennessee Titans. Woods has had success playing off of one stud receiver in Cooper Kupp and now will do the same with AJ Brown. However, it still is unknown when he will even be able to make his return to the field following the torn ACL. This uncertainty could present a great buying opportunity for those looking to capitalize on what has been consistent production from the soon-to-be 30-year old receiver.