There were some unique games for Week 1, but strange things shouldn’t be a surprise. Looking forward to DFS Week 2 matchups, take the lessons learned and apply them to your lineups and the games you’re attacking.

We nailed the Browns matchups, and although it’s counter-intuitive to play both Nick Chubb and Kareem Hunt in the same lineup, you were rewarded. They put up over 40 points combined, while running it back with Travis Kelce would have netted you close to 60 from just three slots. Even the call on David Njoku in deep contests would have given you a solid return on investment.

I wasn’t bullish enough on Tyreek Hill or Patrick Mahomes, but saving $500 and pivots to Kyler Murray for 1.7 fewer points was still a solid play.

Although this still hit 51 points, and we only had two plays from the Titans side, I still expected more. A.J. Brown was a disappointment, and although I was playing Kyler Murray over Ryan Tannehill, I still thought he would be a good value: he wasn’t. The Titans offensive line will be something to monitor moving forward after Chandler Jones got to Tannehill six times.

The Eagles dominated the Falcons from start to finish. The Calvin Ridley fade paid off, but unfortunately, the Kyle Pitts/Hayden Hurst love did not. The offense struggled to sustain drives, and the two tight ends cannibalized each others targets. However, the Eagles hit.

Jalen Hurts was a massive payoff and Jalen Reagor looked like a first-round pick. The mistake came when I leaned Quez Watkins over Devonta Smith because I wanted the matchup. Fabian Moreau actually held Smith to one reception on two targets—although the one reception was a touchdown.

Playcalling saved the day as Smith saw regular matchups against the linebacker in Deion Jones. I mentioned we couldn’t predict two completely different teams play styles, but I still leaned Watkins instead of the stud receiver.

DFS Week 2 matchups are going to be exciting. All four o-clock games are projected to go over 50 points, with the Eagles-49ers expected to do the same. In other words: You need to hit big. Three touchdowns and 300 yards from your quarterbacks shouldn’t be likely; it has to be a lock.

Fact to Know: In three of the past four games, nickel corner Jourdan Lewis has given up a touchdown while Anthony Brown has allowed completions on 91-percent of the passes while targeted. Trevon Diggs, who just shut down Mike Evans, has allowed 47.4-percent to be completed with only one touchdown during that same time. Look for Diggs to be one-on-one with Mike Williams while Keenan Allen matches up with Lewis, and Jalen Guyton gets Brown.

If there were ever a game to cite volume over matchup, Cowboys at Chargers would be the one. And not on the side of the Chargers. Keenan Allen is one of my favorite targets, if not my favorite in my top-rated DFS Week 2 matchup. However, the Cowboys receivers are a completely different story.

Yes, the Cowboys have a prolific offense and this matchup is marked as one of the highest-scoring on the slate. We could see something similar to the Browns with a superb defense versus Chiefs elite-level offense from Week 1, except the Chargers defense could be the best in the league.

Michael Davis has been playing some of the best defense in his career over the past two seasons while lining up against some of the best receivers. He’s only allowed a 60.9-completion rate with two touchdowns and nabbing three interceptions while in coverage during 2020. He doesn’t shadow all the time; however, he did follow Terry McLaurin from side to side and held him to just two catches while covering.

Chris Harris will look to cover CeeDee Lamb in the slot. However, with the injury to Michael Gallup, Lamb could look to lineup more often on the outside, hoping to get matchups against rookie Asante Samuel Jr. Lamb is a strong start over Cooper, but don’t discount the 16 targets Cooper saw in Week 1. My stacks will primarily lie with Justin Herbert, Allen, and either Austin Ekeler or one of the Chargers flyers while running it back with one of the Cowboys pass-catchers.

Although the Chargers secondary was tough to beat, you can still pass on them. The Chargers allowed a 1.52 (No.31) DOCE Score in 2020. In Week 1, Tony Pollard caught all four of his targets, albeit for just 29 yards. He should have far better efficiency in Week 2. 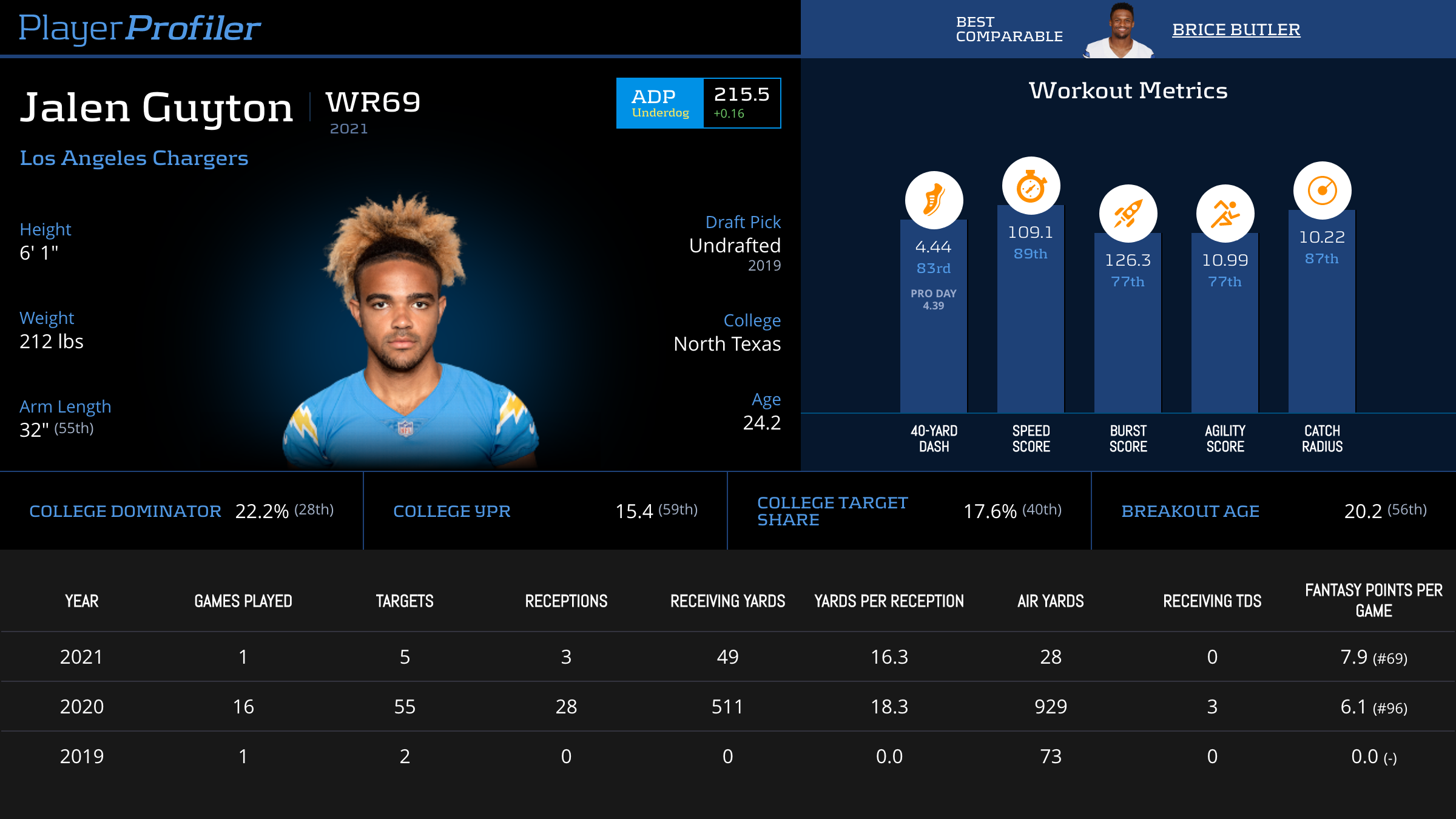 Meanwhile, if this game does involve a good amount of passing, I’d take a shot on the Chargers field stretcher in Jalen Guyton. Although he was primarily used in the screen game in Week 1, he has the ability to get downfield. He finished 2020 with 55 (No.77) targets and yet still had 19 (No. 25) Deep Targets with 929 (No. 44) Air Yards. Big plays can happen against the Cowboys as they allowed 6 (No. 1) in Week 1.

As for Larry Rountree, I expect the Chargers to be up by multiple touchdowns at some point in this game. He was the second back on the field and played with Austin Ekeler on numerous snaps. This combination didn’t do much against the Washington defense; however, the Cowboys defensive front seven is much more porous. So if this game gets to garbage time, or the Chargers have some shots at the goal line, don’t be surprised to see Rountree with 60 yards and a touchdown or two.

Fact to Know: In Week 1, Jonathan Taylor tied his college mark for receptions throughout just 16 games. He also has more yards per reception, receptions of over 20 yards, and a better catch percentage than Nyheim Hines since 2020. Hines has out-targeted Taylor in the red zone thus far, but that wasn’t the case last week. 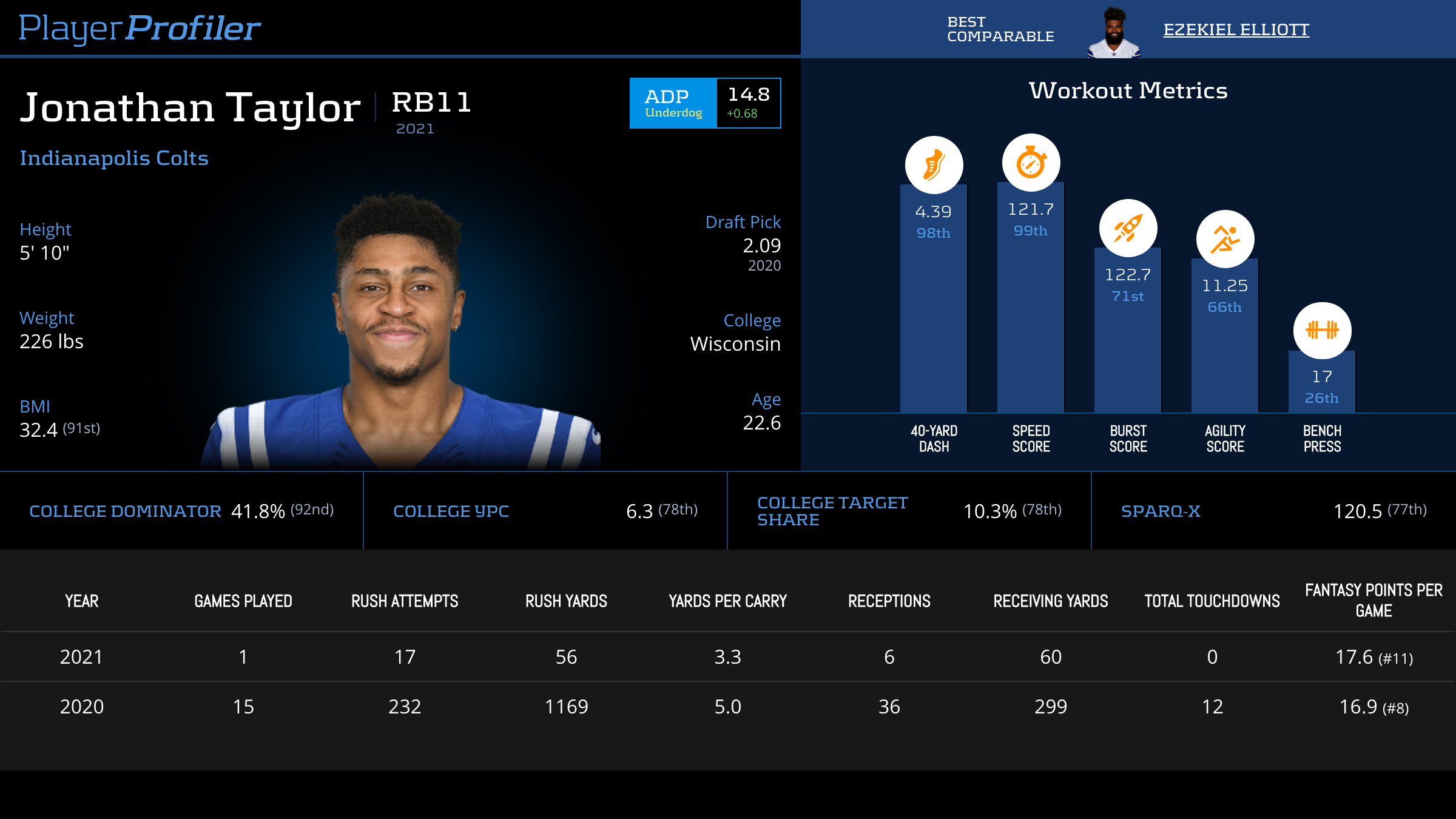 Stafford only attempted 26 passes. Although he added five rushing attempts with three (No.3) coming in the red zone, we will need to see more in Week 2. The juicy part of this matchup is the pricing.

“Contrary to popular belief, dual stacking isn’t done to maximize your upside. Assuming you’re correct about the decision made at quarterback, it minimizes your variance and helps increase your floor. Revisiting the first six weeks of 2020, the average points scored by a dual-stack was 92.2, or 36.74-percent. The average salary spent on those players accounted for 38.63-percent of the total.” –Draft Kings Milly Maker Strategy

The stack of Stafford, Cooper Kupp, and Robert Woods account for just 36.2-percent of the salary for your base. If you read any of my pieces in the offseason, you would know the average cost of the winning stacks for the Milly Maker was 38.63-percent. However, to get to that mark, you had to play a low-cost flyer most of the time. With the undervalued prices of the core lineup, not only do you have tremendous upside, you are also able to build a solid lineup around it.

The best optimization of this lineup is to run it back with one of the pass-catchers in Taylor or Hines. Although the more appealing option might be Nyheim Hines due to the price, I’m leaning Taylor in this DFS Week 2 matchup.

Taylor has appeared to be the more superior pass-catching back. Although they were similar in snap share, Taylor saw a 58.5-percent (No. 23) Opportunity Share with a 21.2 (No. 5) Weighted Opportunity Share compared to Hines 41.5 and 18.0-percent. He even saw the only red-zone target to a running back.

Rams had an average DOCE Score in 2020

In addition, Bears running back David Montgomery had 108 yards and touchdown while Damien Williams went four receptions on five targets for 28 yards against the Rams in Week 1. Although the Rams DOCE Score was average last season, they lost some crucial pieces to the middle of their defense in John Johnson, Samson Ebukam, and slot corner Troy Hill. The Bears did their best to attack the middle, but the Colts are better equipped with their backfield.

I have never put a positive thing on paper for Van Jefferson, so this is new for me. However, seeing his 18 (No. 64) Routes Run tied with Robert Woods while out-targeting him is worth a shot. Not to mention he had a 33.3-percent Red Zone Opportunity Share.

As for Zach Pascal and his 48 (No. 2) Slot Snaps, I mentioned how the Rams have downgraded to David Long, who earned a -16.1 Coverage Rating. When targeted 12 times, he allowed eight receptions and a touchdown. All you need is a handful of catches and a touchdown to see a significant ROI.

Fact to Know: The 49ers haven’t given up 20 targets to the running backs in over a decade, although the 2018 Lions got close.

If you aren’t rolling out at least a couple of lineups with Jalen Hurts, you’re doing DFS wrong. There hasn’t been a more dynamic player in the league regarding the disrespect in his pricing. Only Tom Brady has more fantasy points on DraftKings since Week 14 of 2020—including Week 17, where Hurts didn’t finish the game.

Devonta Smith, at only 5,400, should be the go-to stack as the 49ers leading corner tore his ACL. I expect the play calling for the Eagles to attack advantageous matchups as we saw in Week 1. So that also includes Miles Sanders and Dallas Goedert—each of who are in positions which the 49ers gave up tremendous value.

As for George Kittle, the Eagles played great against Hayden Hurst and Kyle Pitts. Neither of them crossed the eight-point threshhold. However, the Falcons tight ends put up eight receptions on twelve targets for 59 yards. In addition, with only 11 red zone opportunities, the upside was limited. With Kittle as the focal point of the 49ers offense, which is far more efficient than the Falcons, there should be plenty of receptions and touchdowns up for grab in Week 2. Kittle at $6,400 will optimize this DFS Week 2 matchup.

As mentioned above, the 49ers were putrid against the Lions running backs. Kenny Gainwell might not be as touchdown reliant as he was in Week 1. At the lowest pricing possible for a running back, he could allow you to play some more prominent names at the front of your lineups.

Titans at Seahawks is super intriguing on the Seahawks side. Love the stacks with Russell Wilson and his pass-catchers. As for the Titans, the same narrative as Week 1, although unsuccessful, applies to Week 2. Tough to run on the Seahawks and they can get beat in the secondary. I don’t believe Ryan Tannehill plays as poorly so for that reason I will be running my stack back with A.J. Brown.

Be cautious! It’s projected to rain from Friday until Monday, making for messy conditions. If you don’t play this game for fantasy purposes, then you need to smash the sportsbooks under at 54.