The “Brady-train” looks to be leaving fantasy gamers at the station this week. Despite coming off a red-hot Week 1 (379 yards and 4 touchdowns) and leading the team with a slate high 32.5 Vegas implied team total, Tom Brady still only projects as the sixth-highest rostered quarterback (h/t Rotogrinders).

Only a year removed from leading the league in Air Yards and Deep Ball Attempts, Brady finished Week 1 top 10 in both categories. Tampa’s indifference to the run game against Dallas resulted in them calling pass plays at a massive 78-percent clip (second-highest rate). Look for the Bucs to stay pass heavy against a similarly weak Falcons secondary that just allowed a QB1 performance from Jalen Hurts (28.76 DKPt).

The Cowboys/Chargers game will be popular and for good reason. Dak Prescott and Justin Herbert ranked second and fourth in Attempts Per Game after one week of action (47 and 40 attempts respectively.) The games’ slate high 55-point implied game total tells a story that Vegas expects another shootout too. Keenan Allen and Amari Cooper lead their respective teams equally each with a 28-percent Target Share. This makes for a logical stacking combination.

Russell Wilson lit up the Colts to the tune of four passing touchdowns to start the season hot. He now faces a worse than advertised Titans defense that just allowed the most fantasy points to the position in Week 1. Wilson’s surgical 78.3-percent Completion Percentage ranks first among Week 1 quarterbacks. The Seahawks have an implied team total of 30 (third-highest) and Wilson projects to be sub 5-percent owned by the field. You know what to do.

Going back to the well with Kyler Murray and DeAndre Hopkins should pay off in Week 2. Only Jameis Winston (legit shocker) threw for more passing touchdowns than Murray in Week 1. Priced up as the most expensive quarterback and wide receiver pairing, here’s a situation where paying up to be contrarian could be the separator needed to bink.

Nick Chubb enters Week 2 as the RB6, having just hung up a pair of rushing touchdowns on the Chiefs. A couple more touchdowns for Chubb would make perfect sense against the Texans too as Vegas expects the Browns to score plenty (30.25 implied team total, second highest.) Chubb’s 43.8-percent Red Zone Opportunity Share and 5.49 Rushing Yards Per Carry illustrates his touchdown upside. 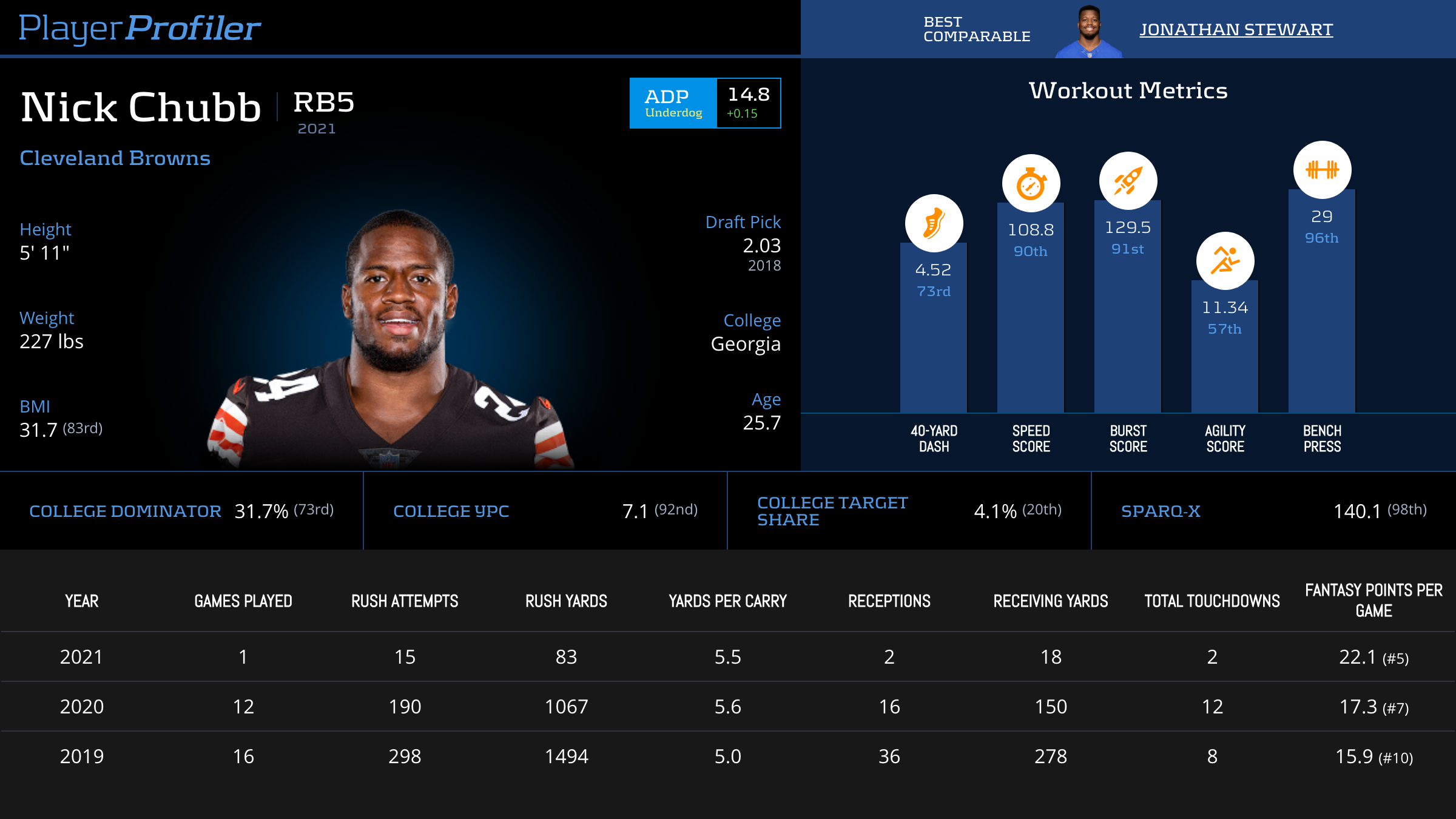 The Browns ranked No. 23 in pass percentage in Week 1 (maybe to their detriment) in what devolved into a negative script against the Chiefs. But by persisting with the run game again in an actual positive Game Script, Chubb and the 12.5 point home favorite Browns will surely smash expectation.

Najee Harris checks in at number two in our Week 2 running back rankings. Though unproductive against a stingy Bills defense in Week 1, Harris still logged an unreasonable 98-percent Snap Share. This kind of workload is what DFS dreams are made of and the matchup only gets better with the Raiders on deck.

The Broncos were happy to split the running back carries fairly evenly Sunday with rookie Javonte Williams edging out Melvin Gordon by a touch. Despite Gordon outproducing Williams (a 70-yard touchdown buoyed Gordon’s day for sure), I’m giving the Week 2 edge to the more nimble rookie who’s workout metrics include a 71st-percentile Burst Score and 89th-percentile Agility Score. You can do worse than a $4400 back facing the Jaguars bottom three rush defense.

Allen Robinson doesn’t have the best value at $6200 or play in a projected shootout, but he does have matchup and volume on his side. Having been “quarterback-proof” since his Blake Bortles days, Robinson continues to command targets regardless of who’s under center. Robinson owns a 25.4-percent Target Share and sees a notable 9.4 Receiving Targets Per Game average (both top five). 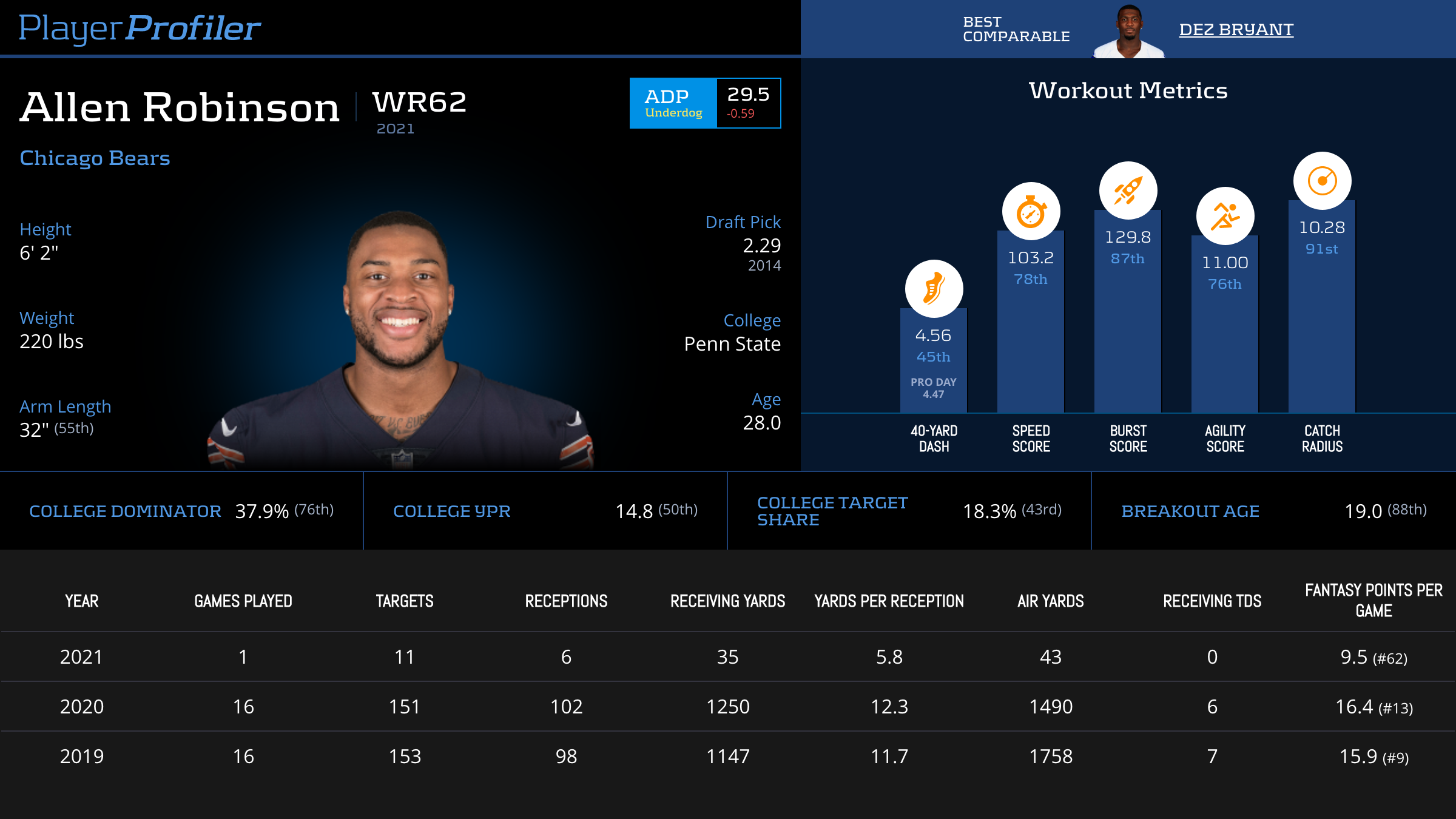 In Week 1, the Bengals surrendered the third-most fantasy points to the Vikings’ wide receiver duo, including two touchdowns to Adam Thielen. Expect more output for Robinson here with no real threat to his Target Share in a matchup PFF grades third-best among wide receivers.

Tyler Lockett was Russell Wilson‘s target du jour in a Week 1 whooping of the Colts. On his way to an impressive 100-yard/2-touchdown performance, Lockett garnered 53-percent of the team’s Air Yards. I’m good going back to the well in this one with the Seahawks offense starting to cook.

With Cowboys wide receiver Michael Gallup now on IR, Amari Cooper and CeeDee Lamb will see even more work (if that’s possible).  The duos 31 combined Week 1 Targets ranked first and second among all wide receivers. With a bigger slate like this, ownership is more spread out and eating the chalk with a 15-percent projected player is more palatable.

Rob Gronkowski looks like the discount to take from the Buccaneers offense. The Week 1 TE2 gets a $1500 price bump but remains a value at just $4700. 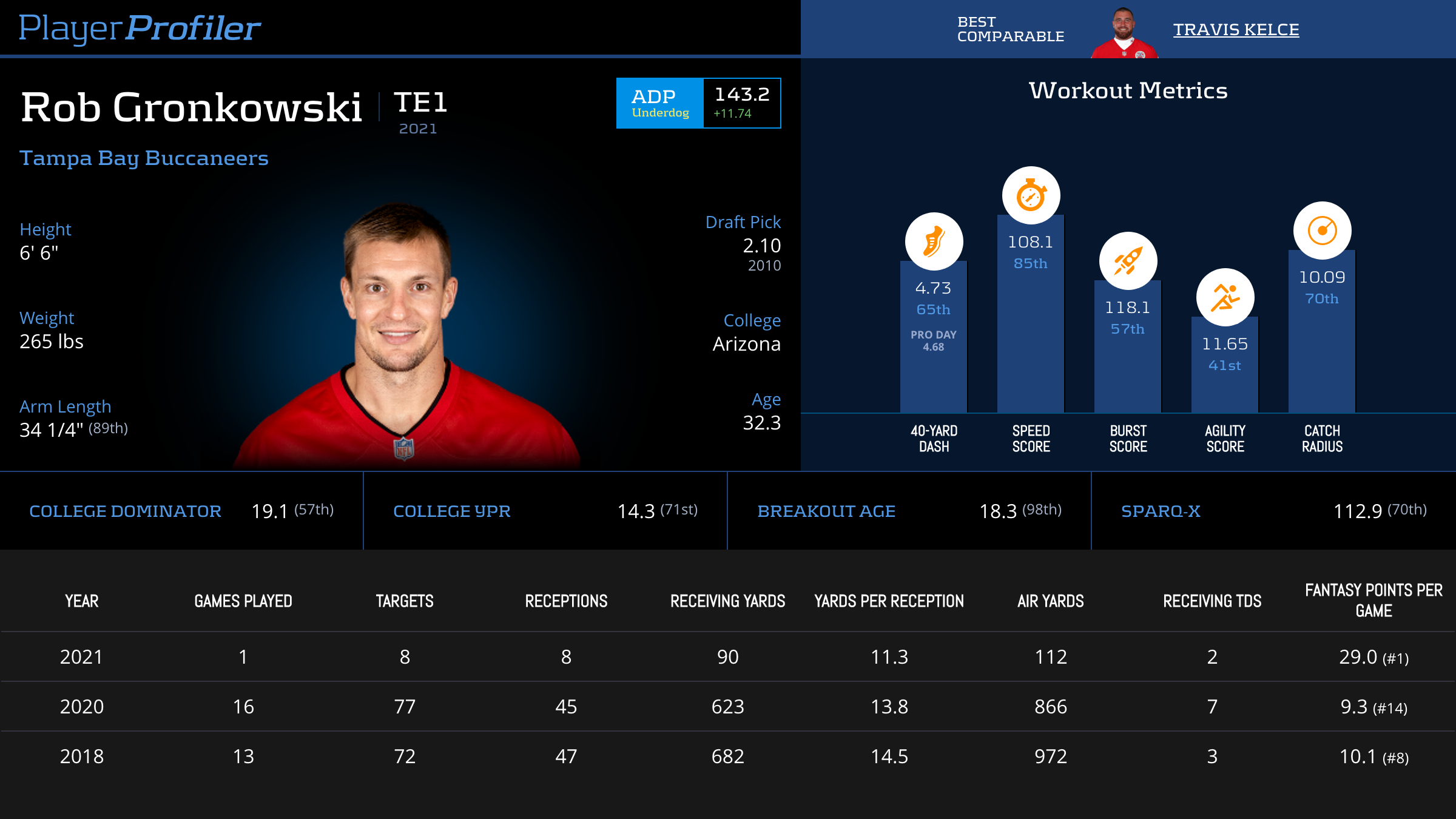 Outside of finding the end zone twice, Gronkowski trailed only teammate Chris Godwin with 8 targets. Last season, the Falcons allowed 15.5 DKPts to opposing tight ends (third most) and look just as bad this season.

Darren Waller is expensive as hell ($7600) but his usage can’t be denied. Waller was a top-two option in Air Yard Share (26-percent), Target Share(28-percent) and Route Participation (91.7-percent) last season. He’s also coming off a Week 1 outing where he pushed 20 targets (19 to be exact). He’s not a must play but needs to be in your player pool.