As the preseason closes in and we inch closer and closer to Week 1, DraftKings decided to give us quite a tease. By releasing the Week 1 contest prices, it reminded everyone: DFS and the DraftKings Milly Maker is right around the corner.

The first three to four weeks are always the toughest, but nothing was tougher than playing the first three to four weeks in 2020. Without any preseason or live practices, there were few indicators of individual player value. For example, the role most thought was guaranteed to D.J. Moore actually fell into Robby Anderson’s lap. Few foresaw Jamison Crowder dominating like he did in Week 1.

With 2021 actually having preseason and live camps, the public will get to view some of these situations to make more accurate decisions for Week 1. However, nothing is guaranteed.

Part one of this two-part series will cover strategies leading to positive results in the 2020 Millionaire Maker. Getting a clear understanding of what happened in the past can help to find success in the future.

Quarterbacks in the DraftKings Milly Maker

There was only one week where a lineup won in which it didn’t have a quarterback who scored at least three total touchdowns. This was also true for 2019. Taysom Hill, found in Week 11’s winning lineup at quarterback, was priced at just $4,800. 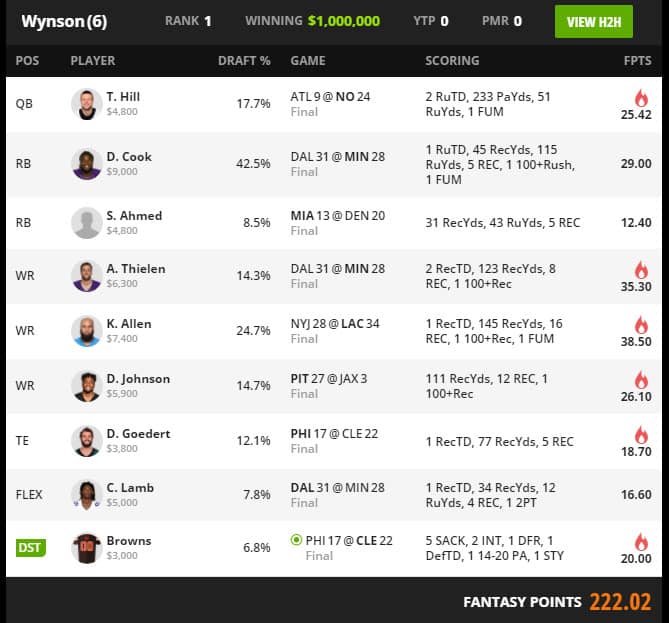 Unlike in single quarterback leagues, you need your quarterback to score multiple times. So you have to find one who puts a dent on the scoreboard.

There were only two DraftKings Milly Maker lineups who had a quarterback with less than 30 points scored.

Play the matchups and don’t get cute. The only top defense (said loosely, since they were moreso average) who a Milly Maker-winning quarterback faced was Tampa Bay against Patrick Mahomes. In addition, teams like the Vikings, Jets, Cardinals, and Falcons were up there on multiple occasions. Hindsight shows focusing on quarterback matchups was a pivotal piece to winning the top prize. 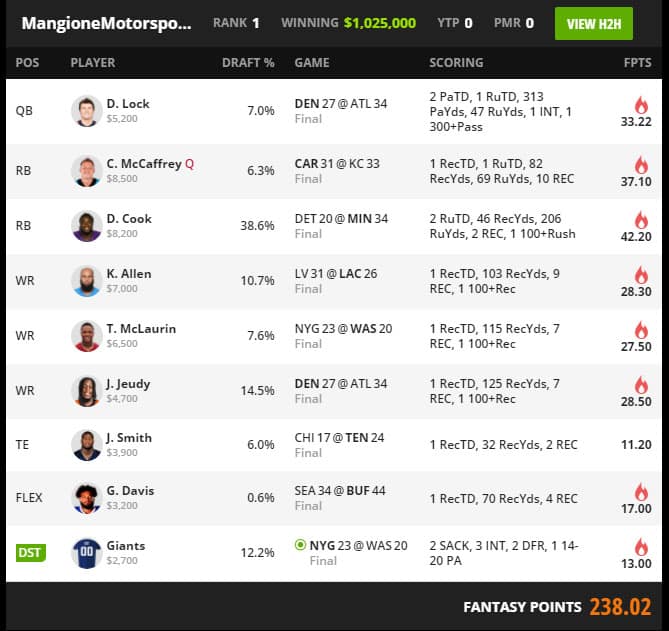 You might not have to pay up, but don’t go bargain-basement shopping. There were only two quarterbacks who won and were cheaper than $5,800. Hill, in Week 11, was played naked, and Drew Lock was stacked with Jerry Jeudy. It was one of Jeudy’s three touchdowns on the season, and one of only two performances where you would have started him. You most likely lost money targeting this stack throughout the season.

As for the receiver position, getting one stud is crucial. There was only one week where a team didn’t have a receiver over $6,500. They are more reliable and consistent. The top-priced ones also have significantly better matchups and you can find other players on their team who are cheaper options. Typically one receiver won’t count for all the team’s touchdowns. If it’s a lousy defense, look for a running back or a red zone target who could score in ways the wide receiver won’t. 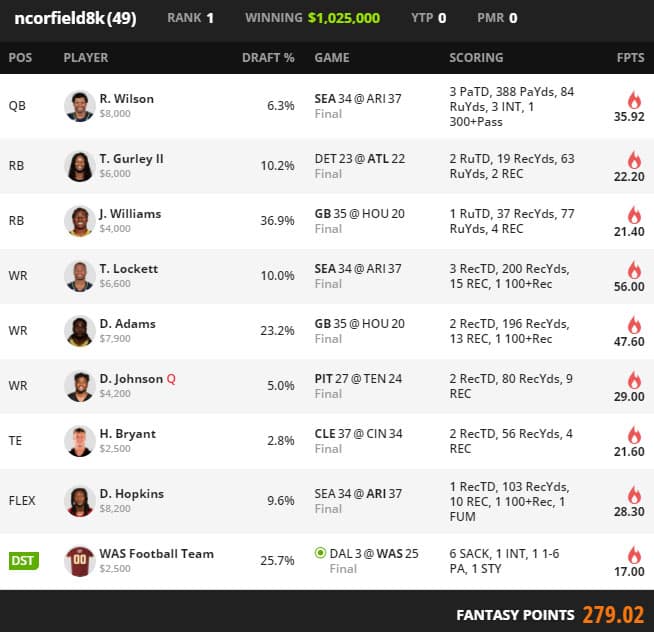 Some consider pairing a running back with a receiver a way of cannibalizing opportunities. However, if the offense will score five touchdowns like Green Bay did against Houston in Week 7, why not pair Jamaal Williams at $4,000 with Davante Adams, who had 174 yards and two touchdowns with 4:50 left in the third. The blowout allowed Williams to assume the lead role during garbage time, getting 36.8-percent of his carries and a touchdown in the fourth. D.K. Metcalf and DeeJay Dallas in Week 8 is another excellent example.

Balancing top-shelf-priced receivers with scoring threats on the same team during great matchups is a recipe for success.

Stacking and putting receivers in the Flex are the other two strategies with wide receivers which lead to success. I won’t bore you by spending too much time, but there were only two teams who started a quarterback and didn’t stack them. Single stacking and dual stacking receivers showed similar results, while stacking a wide receiver and a tight end resulted in three DraftKings Milly Maker wins. 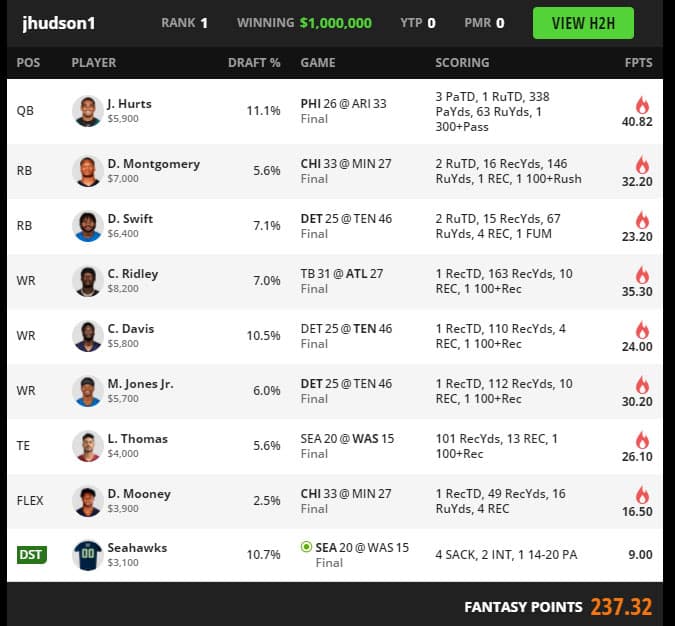 As for starting a receiver in the Flex, it allows you to play options below $4,000 and pay up at other positions. Obviously, those receivers are below $4,000 for a reason. However, finding the right ones like Tre’Quan Smith, Gabriel Davis, and Darnell Mooney helped people cash in on the DraftKings Milly Maker while playing multiple options above $6,500.

Having three running backs works, as long as at least one of them isn’t expensive. However, running backs having a minimum pricing of $4,000 hinders the ability to find a return on investment, or ROI, as high as you can on wide receiver. In addition, almost as many tight end Flex plays won (three) as running back Flexes (four), yet tight ends are typically far less expensive.

Every time an injury occurs to a running back, there’s chatter about how their backup is a free square. However, being a free square isn’t enough. If a running back is less than $5,000, they have to catch passes. Only Devonta Freeman in Week 5 helped win someone a million while catching fewer than three passes.

Finding which defenses you can play pass-catching running backs against can win you a boatload of cash. Referring to Dump Off Containment Efficiency, or DOCE, scoring can help out with this tremendously.

After a huge Monday Night performance the week prior, most parties would have opted to go with Kenyan Drake in Week 7. However, the DOCE score indicated Chase Edmonds would be a far better option against the Seahawks, who ranked dead last against backs in the passing game. 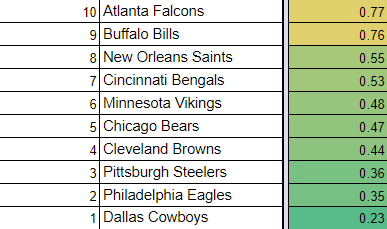 Without knowing the DOCE score, you would have missed on players like Jerick McKinnon against Arizona (No. 27) and played guys like J.D. McKissic against Dallas (No. 1). Hitting on these matchups with running backs priced below $5,000 is the free square you should be targeting, and yet so few do.

When looking at the tight end position, it’s tough to pick up on a recurring theme. There is one thing clear, however. The return on investment for tight ends inside the $5,000-$6,000 range was almost nonexistent. There was far more consistency and production for the top-tier tight ends like Darren Waller and Travis Kelce. Meanwhile, if you punt the position and hit, the return on investment is extreme.

Building a base through stacking is the recommended method to go about constructing a lineup, especially early in the season. Each winning team for the first six weeks of 2020 had a dual stack; the first four stacked two wide receivers. This partially had to do with great offenses going against terrible defenses, but these first six weeks shouldn’t be ignored. The Milly Maker saw 50-percent of its first six winners in 2019 finish with dual stacks. The three who didn’t still managed three of the four highest scores over both 2019 AND 2020. Chasing those outliers will more than often leave you with empty pockets.

Contrary to popular belief, dual stacking isn’t done to maximize your upside. Assuming you’re correct about the decision made at quarterback, it minimizes your variance, and helps increase your floor. Revisiting the first six weeks of 2020, the average points scored by a dual stack was 92.2, or 36.74-percent. The average salary spent on those players accounted for 38.63-percent of the total. 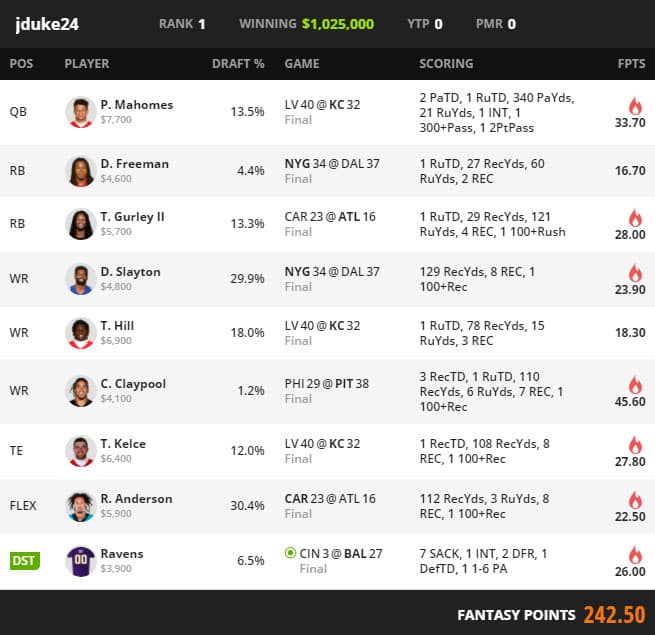 Just because there’s a decline in the return on investment compared to the rest of the roster doesn’t mean they get a condonation for doing poorly. On the contrary, the stack still did exceptionally well; however, the rest of the build just did better. The reality is you are most likely going to win because your quarterback returns a significant value. Selecting the right players to correlate with his output creates a minimum amount your base can score. From there, you look for upside.

However, some might ask, why not increase your ceiling and go with a player from a different team?

The likelihood the player from another team puts up more points at around the same price point without their quarterback hitting a high level is low. The receivers who produce elite points without the quarterbacks are inconsistent and difficult to identify, especially having to select three to four receivers/tight ends with no correlation versus two or three.

Early in the season, minimizing risk while achieving a tremendously high floor is something to attack when solidifying a foundation.

Following the construction of the base, finding the stud is next. There’s at least one player who will smash; finding that guy is crucial. He will most likely be the most rostered player across all builds, since his ROI should be through the roof. The value assessment is likely based on matchups or a price break.

For Week 1, the smash play at running back may be Nick Chubb against the Chiefs. At wide receiver, you can say D.J. Moore against the Jets. For tight end, it could be Dallas Goedert against the Falcons. Regardless, it’s a player who you will have a significant roster share across profitable lineups.

Alas, you have to see where the salary stands. By this point, it’s more about deciding whether to punt most other positions and grab a higher-end player or try to even out the spending. Typically with this, I’ll try to find a defense and running back which correlate. In a tournament like the DraftKings Milly Maker, double-digit points from a defense can vault a team into another stratosphere.

If a team is winning by multiple touchdowns, they are likely running the ball late in games. It’s safer and burns more clock. It’s not as prevalent a strategy as it was the ’90s, but teams still do it. The Game Script creates an opportunity for volume and breakaway runs from the backs. It also creates turnover and sack opportunities for the defense as the opposing team will undoubtedly be throwing to get back into the game.

Filling in the Gaps

After finding a defense and a correlating back, it’s about filling in the holes. Choosing to run it back with a player on the opposite side of a stack is one strategy, but it doesn’t always payout. By using different players on the opposing team, you can create correlations with your matchups. 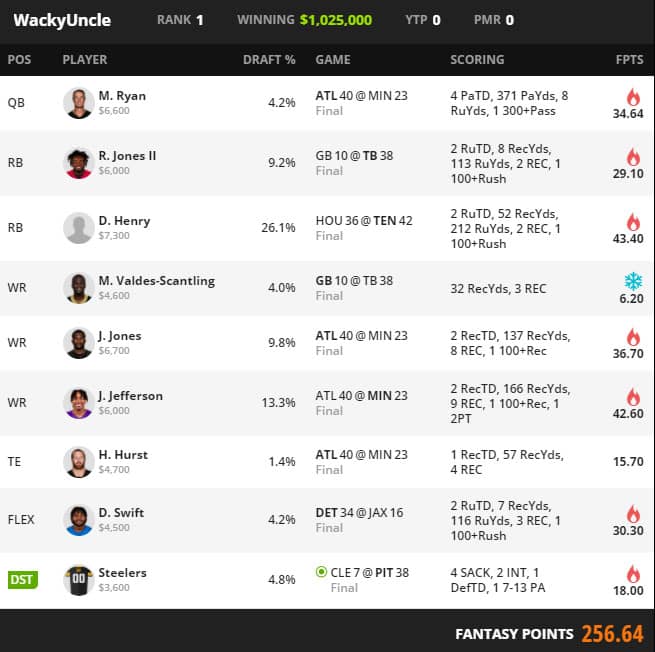 Using a player on the opposite side should be more of a tiebreaker than a deciding factor. Keep in mind, just like redraft, putting players in tiers, in terms of possible fantasy outputs, makes sorting which players you want immensely easier.

Lastly, keep an eye on projected rostered percentages. Ideally, the collective rostership of your entire team should be no more than 15-percent, while anything below eight-percent might be too “galaxy-brained.” There should be enough variance to set you apart from the rest, but the likelihood of Derrick Henry blowing up against the Texans is pretty high. Fading a player with significant upside, a high floor, great matchup, and great price rarely plays out.

Just because a player has all high marks doesn’t mean to play them in every lineup. Contrarian lineups can absolutely cash in, but fading them in 100-percent of builds just to go against the grain when everything checks out will rarely result in wins for the DraftKings Milly Maker. So eat the chalk and find the variance elsewhere.

Following this piece, I will dive into a way too early look at who to start in Week 1. As mentioned above, applying the lessons learned is critical to future success. Part two will dissect matchups, expected ownership percentages, and price breaks. Join me as we look to take advantage of DraftKings and their early release for the start of the season.