Week 2 was a tough one for a lot of fantasy managers. If you drafted Alvin Kamara, Tyreek Hill, Cowboys stacks, Chargers stacks, or a number of high-profile players, you had a mixed week. Week 2 was a teaching week. We saw really strong breakouts and promising players solidified their roles moving forward. We now have two weeks of data and can make smart, calculated lineup choices, and identify weak points on our rosters.

If you still have some money left after last week’s Elijah Mitchell bidding war, then you are in for a good week. There may not be as obvious an addition for deeper leagues as Mitchell was, but there are plenty of players who can help strengthen your bench, or give you a necessary spot start with potential for even more down the road.

Regarding Mitchell; the production was not there, BUT the volume was ideal. Having 17 carries to go with two targets is about as much as you can ask for. If he simply scored the TD and was not called down at the one-yard line, the narrative would be different. We also see more injuries with JaMycal Hasty AND Trey Sermon both suffering knocks that may keep them out this week. Hang tight with Mitchell.

As a reminder, something spooky occurs in October and it is not Halloween. It is NFL bye weeks. You need depth to survive those weeks and put a strong balanced roster out each and every time out.

For this week’s waiver wire, we are not going to write fluff about players that are already rostered (hopefully by you).  You read PlayerProfiler, so we are not going to waste your time telling you to go pick up Tony Pollard, Rondale Moore, Sterling Shepard, or Marvin Jones.

If Pollard or Moore are available, then make it rain. Those players would be No. 1 waiver priority adds or 50-percent + FAAB types. Shepard and Jones are WR3/Flex plays and would be great additions if available. But they are NOT available in any single league, I am in so I will assume they are not available for you.

For this article we will GO DEEP. We will present players who should be available in even the deepest of leagues.

Justin Fields looks set for his first start this season against Cleveland with Andy Dalton out with a knee injury. Fields should spark the offense with his scrambling ability. He is a starter in SuperFlex leagues right away and can be immediately considered for QB-streaming teams. He has elite scrambling ability and a fine pair of WRs in Allen Robinson and Darnell Mooney. The Bears have scored 17 and 20 points respectively to start the season. Fields could be just what the doctor ordered to ignite the team and the fan base.

You’re telling on yourself if you call Justin Fields a one-read quarterback👀 pic.twitter.com/ck9Km44DLt

Derek Carr and The Raiders have started the season on a torrid pace. Carr has passed for a league-leading 817 yards in his first two games – and he did so against 2020 playoff teams Pittsburgh and Baltimore. Darren Waller is a superstar and Henry Ruggs/Bryan Edwards/Hunter Renfrow give him a trio of WRs. I am buying the Raiders offense. (NOTE – Carr is an add, but be careful about using him this week since he has a potential ankle injury).

Daniel Jones will lose a lot of games this season, but he has been productive fantasy-wise. He has found the end zone as a rusher in back-to-back games, with over 500 yards passing.  Jones is a starter in super-flex leagues and be considered as a streamer in standard formats this week with a juicy matchup on tap against Atlanta.

Sony Michel saw virtually no run in Week one or the start of Week two, but could be thrown into a high volume role this week with Darrell Henderson being day to day with a rib cartilage injury. This past weekend, he rushed 10 times for 46 yards, helping the Rams win a big road game in Indianapolis. The Rams are one of the best offenses in football, and Michel would immediately be a top 20 play at RB if he were to get the start (NOTE – Henderson’s status is up in the air. I would bet he misses this game, but check Tuesday reports).

Yes, that Cordarrelle Patterson. This has been a long and strange trip. The 30-year-old Patterson finally looks like he is in a situation where he will be used weekly. Honestly, he looks like the third-best option on that offense behind Calvin Ridley and Kyle Pitts, but he does look better per-touch than Mike Davis right now. He has received seven carries in each of the first two games of the season, and caught five passes this past weekend. He found the end zone twice against the Eagles, including an explosive one-handed catch and run inside the red zone on a Matt Ryan dump off. Add Patterson in all formats.

Much to the dismay of Antonio Gibson owners, J.D. McKissic was very much a part of the game plan this past Thursday against The Giants. He caught five passes for 85 yards and also found the end zone on goal line carry. He is clearly not going away this season. He is also head and shoulders above preseason darling Jaret Patterson. If Gibson went down McKissic’s role would sky rocket. For now, he is a potential flex play.

I wrote about Kenny Gainwell as a strong waiver wire addition last week, and he continues to receive touches. The entire Philadelphia offense was shut down, but he now has 19 touches in his first two games. The Eagles are devoid of offensive playmakers and Gainwell could see his role increase as the season moves forward. At the very least, he is the handcuff to Boston Scott.

If only someone had warned you about Miles Sanders today 👀 https://t.co/0Z079Ocjuo

A reminder: if you have room on your benches, these are the type of players who you should be rostering. High-end handcuffs like Alexander Mattison, Samaje Perine, and Chuba Hubbard may collect dust for weeks and weeks, but if you have a chance to use them they can be league winners.

<editors cut: another deep stash is Trenton Cannon in San Francisco. Don’t worry about the UDFA parade visiting the Bay Area. No reasonable fantasy gamers will prioritize Kerryon Johnson, Duke Johnson, or T.J. Yeldon regardless. Cannon has the profile of a runner who can be successful in this 49er offense and is certainly capable of carving out a role next to Elijah Mitchell.> 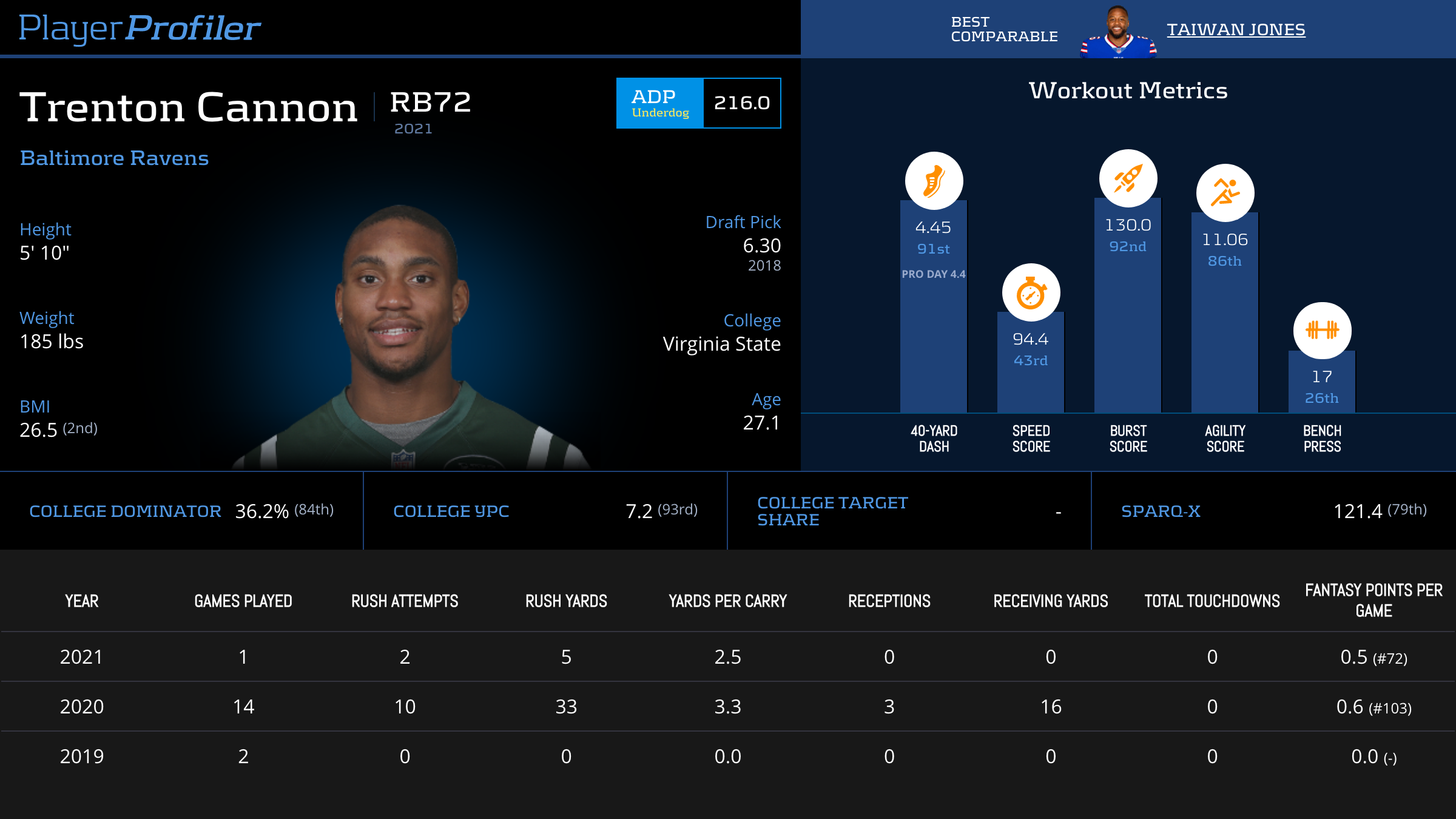 We discussed K.J. Osborn as a player dynasty managers should add. At this point, he should be added in all formats. Operating as the third option in the Minnesota passing attack, Osborn followed up a seven-catch opener with five more catches this past weekend, including a 64-yard TD reception. He could be the next in a long line of University of Miami WRs to have solid NFL careers.

This is a KJ Osborn Stan Account 🤷‍♂️ #Hold 🔥

It feels like the Dyami Brown breakout game is coming. I wrote about Brown in our preseason waiver wire watch list article, and he has already carved out a role as the WR2 in the Washington offense. Curtis Samuel is set to miss this week and possibly more. Brown was up to six targets last week after four in Week 1. An explosive player, expect his role to grow as the season moves along. Beat your leaguemates to the waiver wire by adding him now.

We recommended adding Tim Patrick last week in this column. He did not disappoint, finding the end zone for the second time this season. He is a low-ceiling floor play WR, who can be a fill-in option for WR-needy teams.

This past weekend, Zach Pascal found the end zone for the third time this season. Michael Pittman looks like the clear WR1 in Indianapolis, but Pascal has carved out a role as the No. 2 WR. He is capped by his limited targets, but could maintain 5-6 targets per week and provide WR depth.

With Tyrell Williams out with a concussion, Quintez Cephus found the end zone and finished with four catches on seven targets for 63 yards. He also added an additional seven targets and touchdown in the opener. This was always a WR corps with a lot of question marks, but Cephus has a shot at carving out a weekly role.

Hunter Renfrow is a reliable safety net for Derek Carr and has a weekly floor. He has had at least seven targets in back-to-back games. As long as The Raiders offense keeps flying, Renfrow should be a useful player that can be plugged in when necessary.

Darius Slayton had a terrific rookie season followed up by a forgetful sophomore campaign. He has played well in year three so far with nearly 20 yards per catch. Slayton is a boom-bust weekly deep threat, but he found the end zone last week and nearly caught another. He should be rostered in deeper formats.

Jared Cook was on this list last week. The Chargers stalled in Dallas, but Cook saw another five targets and had a TD overturned on a penalty. He is very much a part of the Chargers offensive attack.

With Jarvis Landry out, Austin Hooper saw an uptick in targets with five this past weekend. Landry is week to week and Odell Beckham‘s return is still up in the air. Hooper should be a low ceiling floor play for at least this weekend against Chicago.

If so, likely at least a 2-3 week absence for Jarvis Landry.
Not great considering Odell Beckham won’t be at 100% even if active next week.

Another low ceiling option for TE needy teams. Jack Doyle is back to his old ways with an 8-target game last weekend. The Colts offense is limited with Carson Wentz banged up, but Doyle should be a safety blanket for Jacob Eason if he gets the start.

Pat Freiermuth saw an uptick in usage in Week 2 and seems to be overtaking Eric Ebron as the preferred TE option. Mike Tomlin was slow with Chase Claypool to start last season, before unleashing him after a bye week. Freiermuth could be on a similar trajectory. He should be rostered in all dynasty formats and can be considered as a speculative add in redraft.