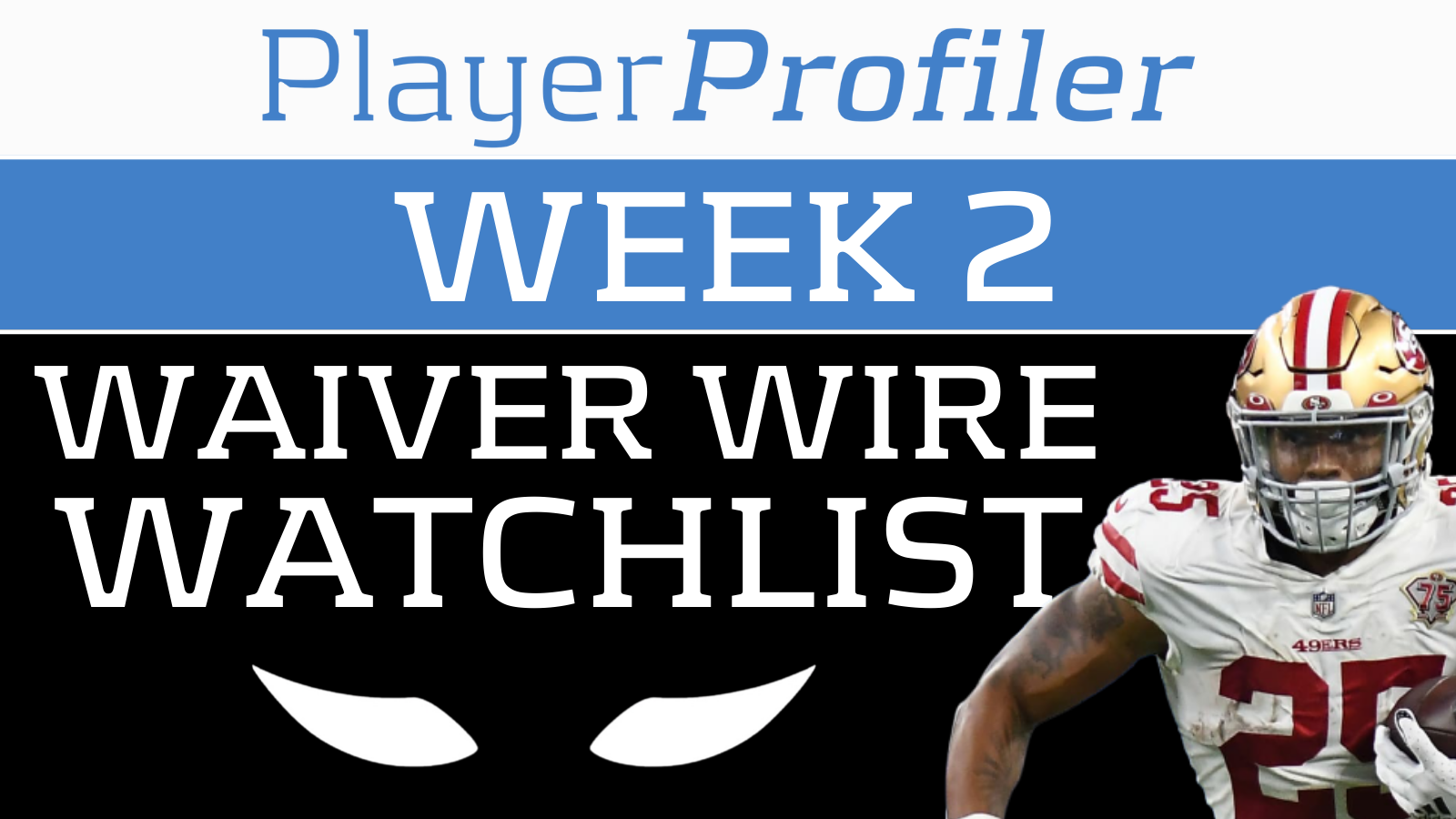 Week 1 is in the books, and a lot of names popped up quickly into waiver wire consideration. Every season, some of these Week 1 producers stick as fantasy values.

As a reminder, keep an eye on players, who are potential cuts this week. Lots of fantasy managers overreact to Week1  box scores. Marquez Callaway is the top WR in New Orleans, Elijah Moore saw a very promising Snap Share, and Rondale Moore is too talented to be left on the wire, even if it takes a little while for his usage to increase.

Jameis Winston had a terrific debut as the Saints’ starting QB. He had five TD passes and showed a willingness to target multiple receivers in New Orleans’ big win over Green Bay. This week against Carolina’s improved defense will be telling for the offense, but Winston should be viewed as a streamer.

Kirk Cousins threw for 351 yards and two TDs in a road loss to Cincinnati. This week he is a viable streaming option against the high-powered Cardinals in what could be a potential shootout.

Will Heinicke have a shot at starting in 2021?💥 pic.twitter.com/NefhdI0VML

This week’s top waiver wire addition is Elijah Mitchell. The sixth-round draft pick possesses top notch athleticism and was a mega producer in college. Raheem Mostert went down with injury and Mitchell carried the ball 19 times for 105 yards and a TD. Fantasy managers continue to be Shanahan’d and we cannot guarantee Mitchell will be the man moving forward, but there is a chance that he sticks as the lead back moving forward in what should be a very good San Francisco offense. I recommend an aggressive FAAB bid. This could be the 2021 James Robinson. Kyle Shanahan clearly does not care that Trey Sermon was a third round draft pick and Mitchell was a sixth rounder. You should not either.

Mitchell rushed for 104 yards and a touchdown on 19 carries Sunday against the Lions💪 pic.twitter.com/vFU3es7pgM

Mark Ingram‘s use was shocking. He had 26 (!!!!) carries in Houston’s opening win and dominated touches. The Texans looked a lot better than anyone (including myself) anticipated, and scored a surprising 37 points. Ingram is old and unexciting, but he runs hard and we cannot ignore volume. Do not go overboard on FAAB here, but the usage is promising.

Kenny Gainwell saw highly encouraging usage in Week 1 as a compliment to Miles Sanders. He scored a TD and had an additional score called back on a penalty. The Philly offense looked competent and efficient in head coach Nick Sirianni’s debut. We cannot ignore that under Sirianni, the Colts produced two top 20 RBs last season (Jonathan Taylor and Nyheim Hines). Gainwell may end up being a Flex consideration further into the season, but for now treat him as a high-end handcuff. Dynasty teams should make him a priority if available. Most importantly, He is far and away ahead of Boston Scott, who appears to be phased out.

Latavius Murray signed this past week in Baltimore. He is behind Ty’Son Williams, but he should be rostered as his role has a chance to grow as he gets more comfortable in the Ravens offense. We have all seen what Murray is capable of in New Orleans when he has a high volume fill-in game.

Larry Rountree looks to be the No. 2 back in LA. The rookie had eight carries to Justin Jackson‘s one.

Groundhog Day for Denver WRs with the team losing its top option in Week 1 of the season. Last year, Tim Patrick was a useful player in PPR and stepped into a large Snap Share when Courtland Sutton went down for the season. This year, Jerry Jeudy‘s injury will present yet another opportunity for the veteran WR. On Sunday, Patrick found the end zone and caught all four of his targets. He will be on the field on all two and three WR sets. Treat him as a potential WR3. There is a chance he outperforms Sutton.

When Cardinals are available, go and get them. The offense is explosive, and Kyler Murray looks like the potential QB1 overall. Christian Kirk played over 50-percent of the snaps and hauled in all five of his targets. He found the end zone two times, and Arizona steamrolled Tennessee on the road. A.J. Green looked very dusty. I am hopeful that Kirk and Rondale Moore can increase their targets, and that Green can be phased out. The market could have been a year too early on Kirk, who may finally put it all together in 2021.

If you do not believe in Tim Patrick (or Courtland Sutton returning to his 2019 form) consider K.J. Hamler. The former second-round draft pick got behind the Giants secondary and dropped what would have been a 50-plus yard TD pass. One of the faster WRs in the league, Hamler will have more opportunities in the next few weeks with the Broncos facing off against The Jets and Jaguars secondaries. His usage may be sporadic, but he could pop over the next two weeks.

Dynasty leaguers and deep leaguers should consider adding K.J. Osborn. The second-year WR had nine targets and seven receptions for 76 yards. In standard leagues, he should be monitored.

Deep leagues and dynasty league managers should consider Anthony Schwartz. During the preseason, Donovan Peoples-Jones appeared to have the fast track on the WR3 position in Cleveland, but Schwartz looked like a better bet moving forward. Odell Beckham missed game one, and Schwartz took advantage of the additional work. A third-round draft pick with sub-4.30 speed, Schwartz is arguably the fastest WR in the entire league. He looks like a role player for now, but if his usage ticks up as the season moves along, he could be a useful player to have as a bye week fill-in.

Cedrick Wilson should fill in for Michael Gallup in three-WR sets in the potent Dallas passing attack. Wilson should be able to offer value in deeper leagues and for WR needy teams. Expect his snaps to rise significantly this week and for the duration of Gallup’s games missed.

After going undrafted behind Michael Pittman and Parris Campbell, it was Zach Pascal leading the way for the Indianapolis WRs in targets and receptions. He caught four passes on five targets and found the end zone twice. The answer to “which Colts WR has the most fantasy volume” is still up in the air, but Pascal is worth rostering based on his potential role.

Matt Babich (@babich_matt10) is giving everyone one last chance to join the Bryan Edwards hive🐝 pic.twitter.com/b2Py0xt0Mm

I mentioned Donald Parham in my preseason waivers column. I was wrong. Jared Cook looks like a strong fit in LA and a potential TE1. He had eight targets in a tight road win at Washington and should be rostered in all leagues.

James O’Shaughnessy ran 44 routes and saw eight targets with Jacksonville playing from behind in their opening loss at Houston. He looks like a player that Trevor Lawrence and the Jacksonville coaching staff have faith in. Choose to ignore him as a potential addition if you want to, but there is a TE or two every year that pops early and sticks. Last season Logan Thomas and Robert Tonyan were waiver wire pickups in the early part of the season.

Tyler Conklin was written up in our preseason waiver column, and his usage was highly encouraging. He caught 4 passes for 41 yards, but more importantly, he saw 59 snaps to Chris Herndon‘s 12. Conklin has the athleticism and now an opportunity. He is one of the better options this week to add at TE.

Adam Trautman could be available, and many fantasy managers will overreact to Juwan Johnson‘s two TD performances, but the Saints love Trautman. He saw a whopping 30 percent of the Saints targets and played on almost every offensive snap (Johnson was third in TE snaps). With this usage, the Trautman breakout game is coming.

We do not want to overpay for TDs, but Juwan Johnson is an intriguing player if the snaps increase. The converted WR scored twice for New Orleans, but he is very much a part-time player for now.