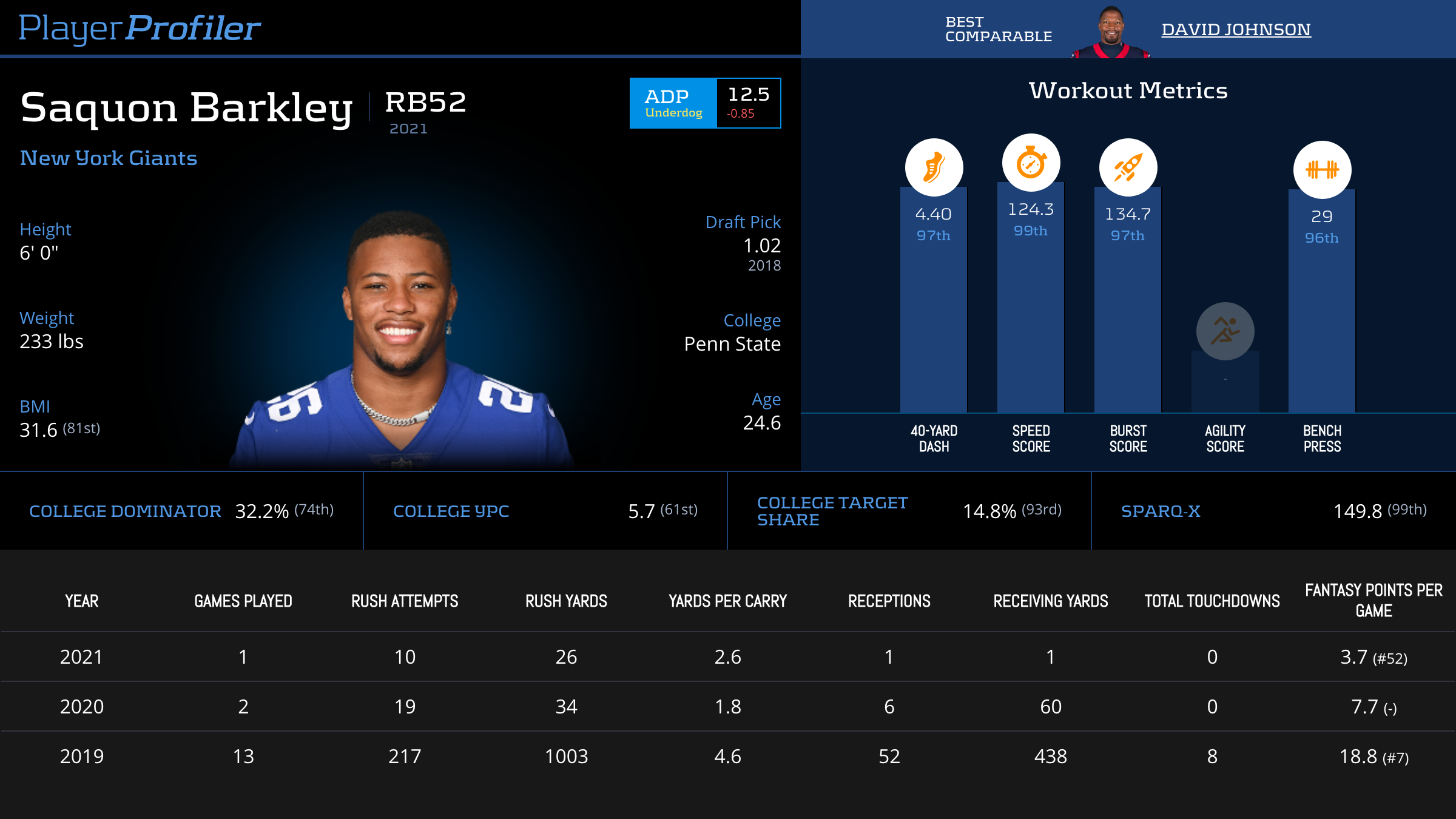 Patience. It can be very hard to stay patient on a high pick like Saquon Barkley, but he draws a favorable matchup against the Falcons after many sat him last week against Washington. Atlanta allowed 4.7-plus yards per carry to Miles Sanders and Leonard Fournette the first two weeks of the season. They struggled defensively last year and hardly made improvements this year. Meanwhile, Barkley showed signs of a return to form on a 41-yard run against Washington last week.

.@saquon with a 41-yard sprint! #TogetherBlue

Yet, he has shown little else with a bad offensive line and suspect play calling. If there was as good a time as any, Barkley has a chance to breakout Week 3 against Atlanta. 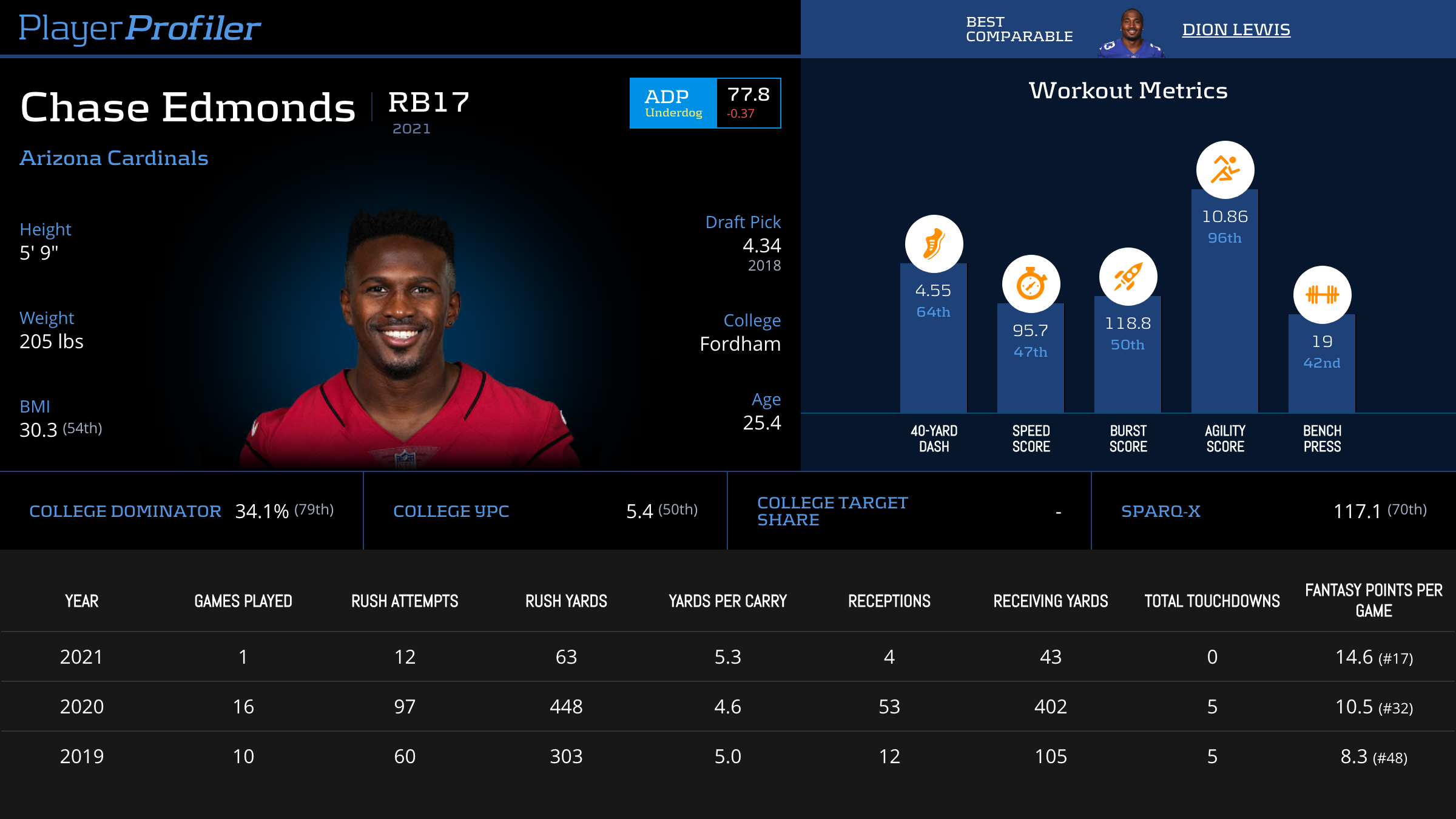 The Jaguars defense has allowed 5 total RB receptions throughout the first two weeks of the season. While that may not seem like all that much, they have also allowed several shallow receptions between the chains. Chase Edmonds is exactly the kind of player that feasts on these shallow targets. He has 9 receptions and averages more than 5 yards per carry this season. His 10.86 (96th-percentile) Agility Score shows that he has the shiftiness in the open field to avoid tackles against a Jacksonville defense that has allowed over 400 yards of offense in both their games this season.

Take advantage of a porous Jaguars defense and start Edmonds, who should get plenty of receiving work with efficient carries. 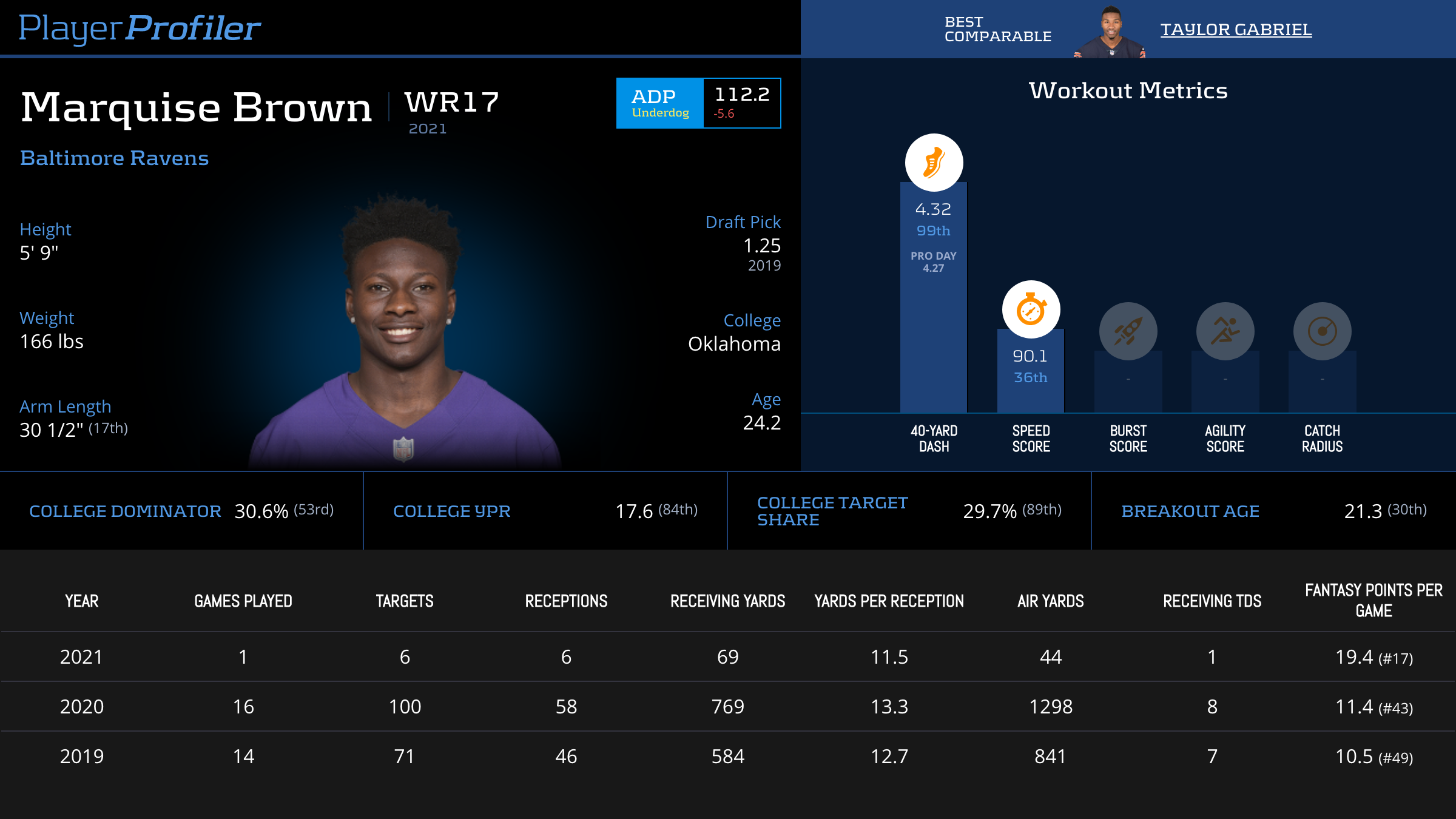 Lamar Jackson has used Marquise Brown and Sammy Watkins *a lot* this season. With Rashod Bateman still out, Brown and Watkins have a combined 31 targets in the first two weeks.

Brown 6-113 and a score, Watkins 4-44. Only two WRs targeted, but Duvernay comes up huge with goal-line fumble recovery for TD

Brown specifically has 6 receptions and a touchdown in each of the first two weeks of the season. Both are speedy, with 40-yard Dashes in the 99th and 86th-percentiles, respectively. They face a Lions secondary without Jeff Okudah that allowed 314 pass yards week 1 and 255 yards with 4 passing touchdowns in Week 2. With the Lions front seven trying slow down Baltimore’s effective rushing attack, the inexperienced secondary will have its hands full attempting to contain the speedy Brown and Watkins. Expect both to continue to get high volume targets and production. 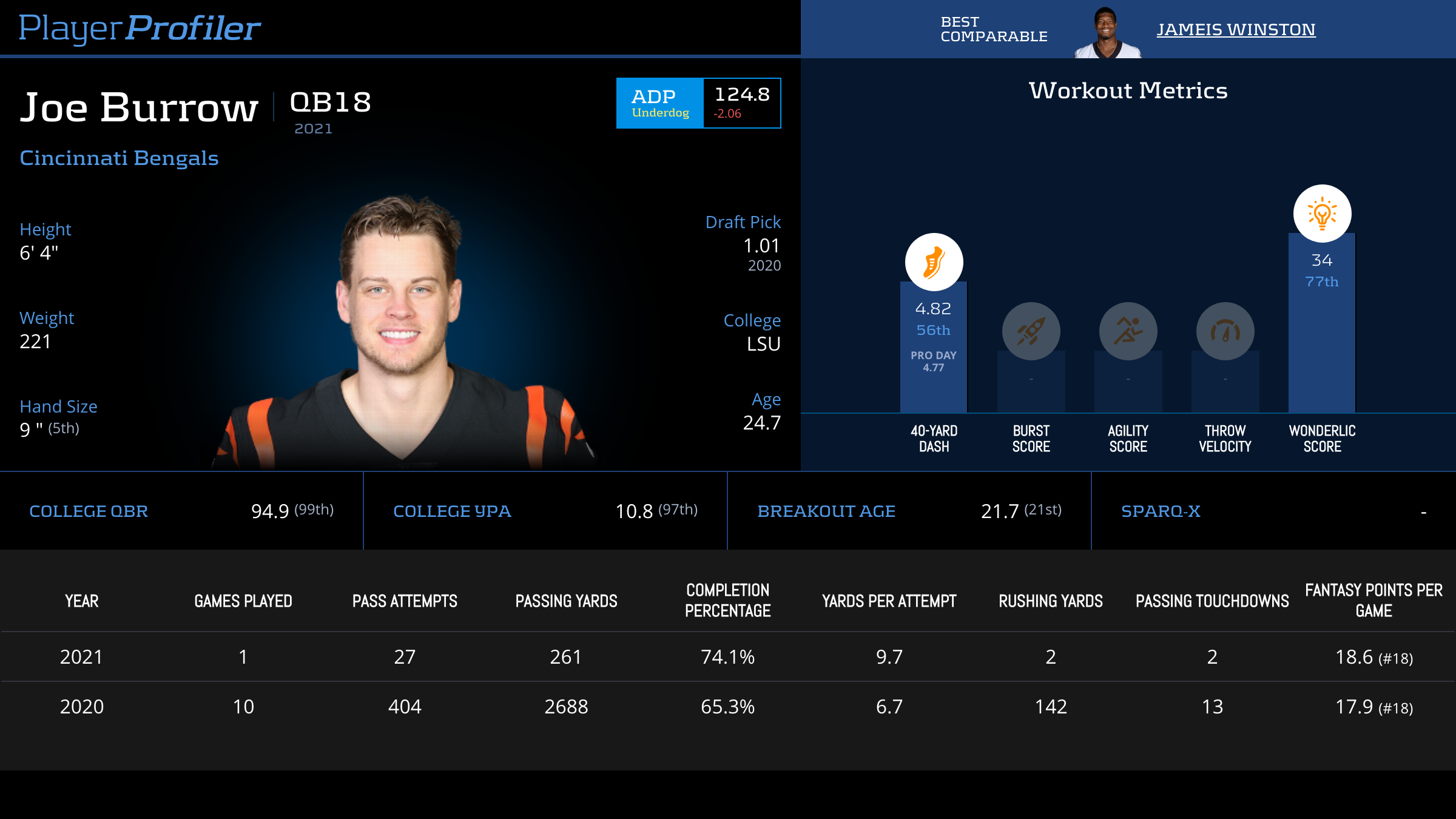 Joe Burrow threw 3 interceptions against the Bears in Week 2, while passing for just 207 yards in a loss. The Pittsburgh Steelers defense is generally solid against opposing quarterbacks. In Week 1, they held Josh Allen to 270 passing yards on 51 attempts, forcing 2 fumbles (1 lost). In Week 2, Derek Carr lit them up for 382 passing yards after losing T.J. Watt, but they still sacked him twice, holding him to 2 touchdowns. Burrow was held to 12.52 (No. 17 that week) fantasy points against the Steelers for week 10 of last year. The Steelers defense finds a way to make an offense play sloppily, expect something similar against the Bengals’ suspect offensive line. Burrow sputtered in Week 2 and does not have a good matchup in Week 3.

Jonah Williams says Joe Burrow has been hit too many times. Williams doesn’t think the protection issues come from a lack of talent, more so being consistent with fundamentals. #Bengals 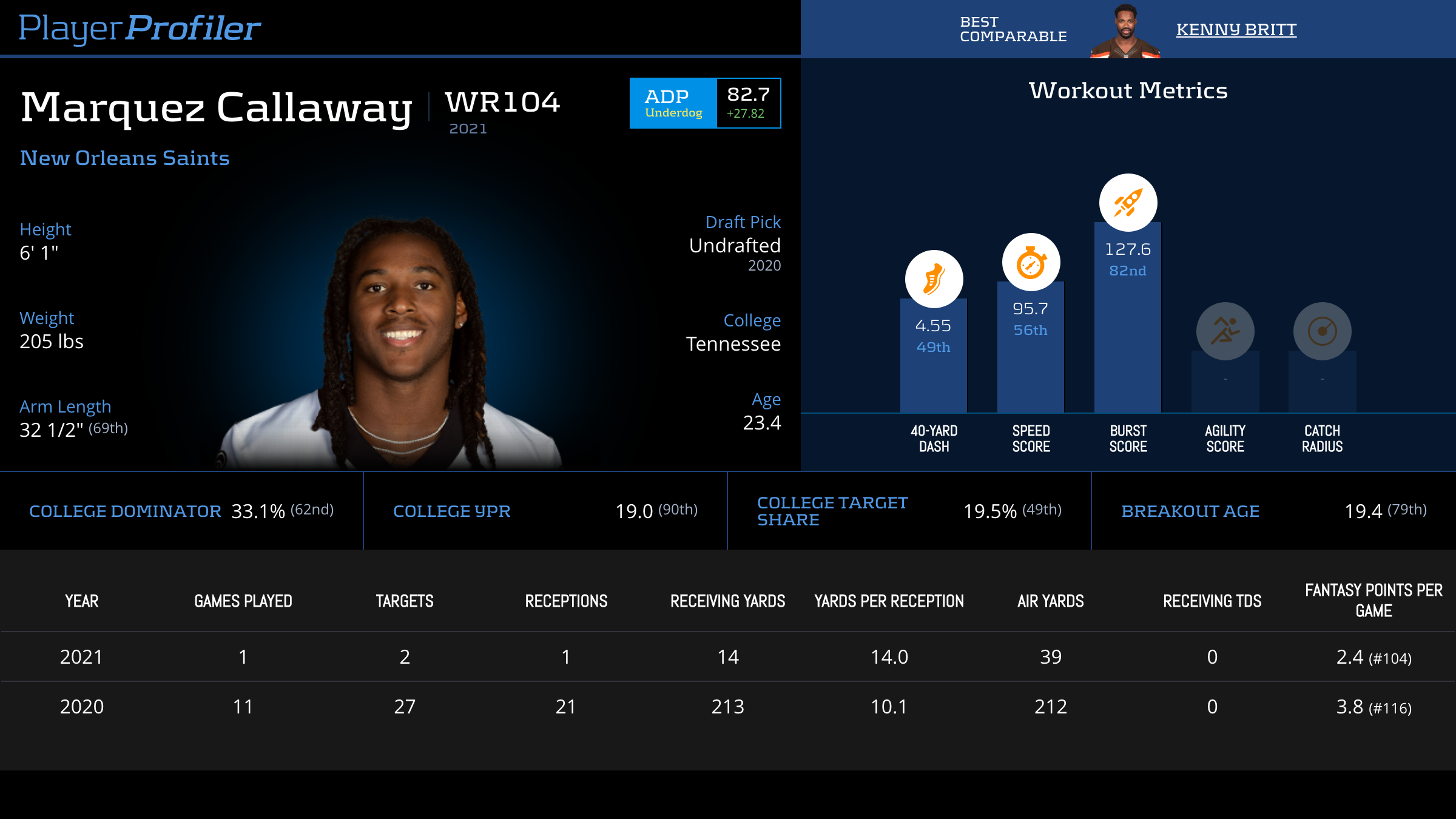 Marquez Callaway WR1 season has gotten off to a rocky start. Callaway has 3 receptions on 6 targets in two weeks.

J.C. Jackson brings another tough matchup for Callaway in Week 3. Jackson is a top-30 CB on PlayerProfiler’s CB rankings and just held Corey Davis to 2 receptions for 8 yards while snagging 2 interceptions. Last season, Jackson had 15 (No. 5) pass break-ups and continues to be a part of a stingy secondary. Jameis Winston is also coming off a rough outing with 2 interceptions in Week 2. The Patriots have 5 interceptions and held apposing QBs to 210 yards or less in Weeks 1 and 2. Both Callaway and Winston have a tough opponent in Week 3. 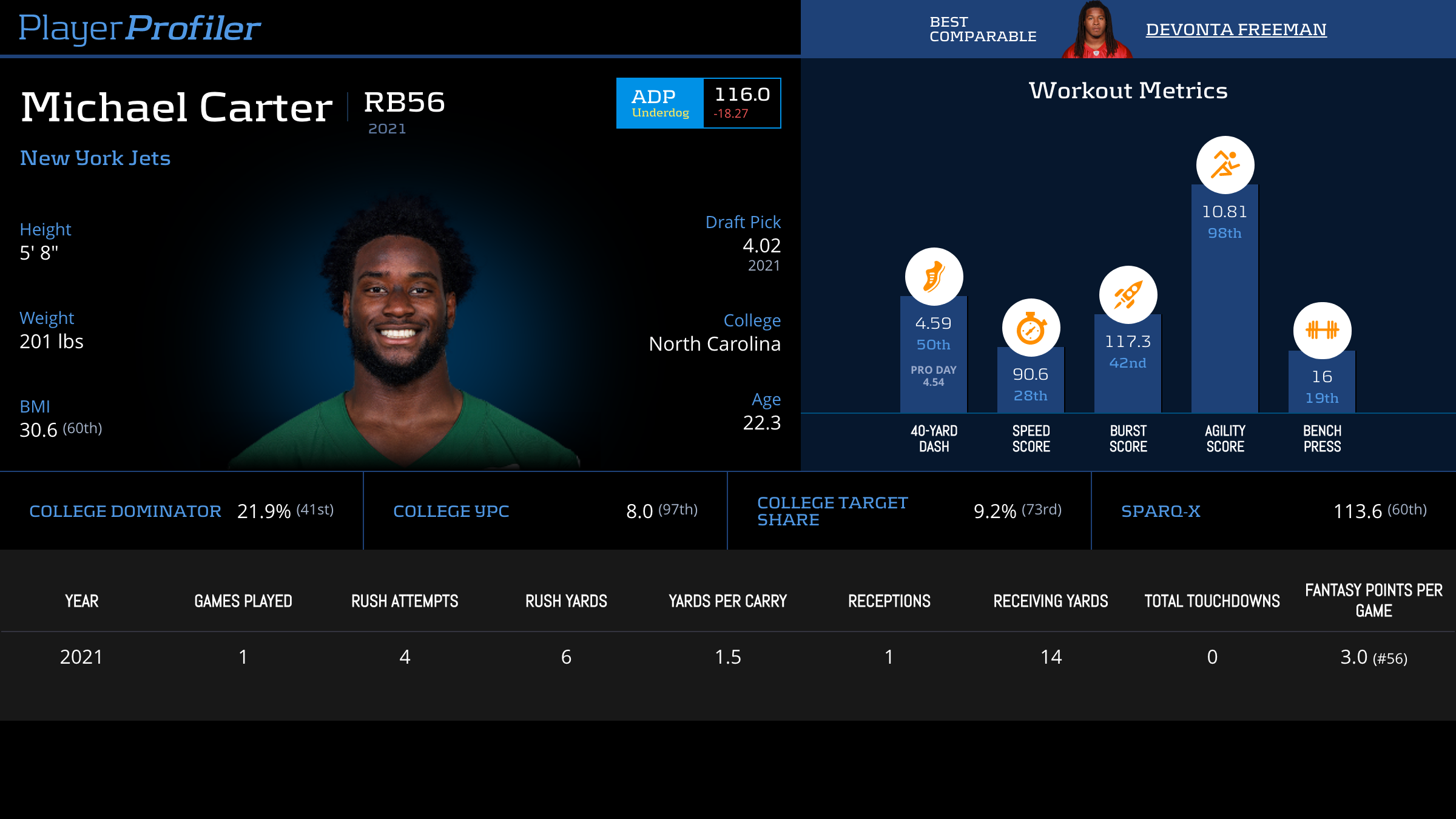 So far, no Jets RB has yet separated himself as a definite lead back. Ty Johnson and Michael Carter seem to be the top two, but their split usage and a matchup against Denver does not bode well fantasy-wise. The Broncos have yet to allow a 50-yard rusher and have held RBs to 4.3 yards per carry or less so far this season. Their defensive line is big and fast with guys like Shelby Harris and Bradley Chubb. With a Jets offense that saw Zach Wilson throw 4 interceptions in Week 2, don’t expect a lot of touchdown or high-yardage opportunity for any Jets RB. Carter could be on his way to becoming a Flex play, but this week may not be the week for him, Johnson, or Tevin Coleman.