Late August is hitting hard. Add J.K. Dobbins, Travis Etienne, and Adam Trautman to the preseason injury casualties, including Cam Akers and Michael Thomas. Early redraft league drafters will need to scramble and hit the waiver wire in the preseason run, and even the deeper dynasty leagues may need some help.

While Weeks 1-2 are usually an excellent time for impactful waivers since we have actual game usage, do not overlook the preseason. The preseason waiver wire has been fruitful in the past two seasons. In 2020, savvy fantasy managers were able to add undrafted free agent RB James Robinson of Jacksonville in many leagues. He was one of the better success stories ever from the early run, finishing as RB7 overall with a 17.9 (No. 5 among qualified running backs) Fantasy Points Per Game average. In 2019, continual glowing reports from both the media and the coaching staff about a fourth-year TE continually making plays in camp made Darren Waller a cheap speculative addition for many fantasy managers. He went onto a 90-catch season with over 1,100 yards receiving.

If you are light at WR or want to add a player who could make a big impact to start this season, then Callaway is it. The second-year UDFA from the University of Tennessee looks to be the WR to roster in New Orleans. He has shown unreal preseason production, dominating first and second-team defenders. In game one against Baltimore, he hauled in three catches for 61 yards. In preseason game two, with Jameis Winston as the starting QB, he went nuclear with five catches for 104 yards and two TDs.

Anything less than 11K yards would be surprising at this point. pic.twitter.com/rvdL4Lxk4A

Callaway has shot up to around the Round 7-9 range in redraft. With Winston being named starter and Michael Thomas’ timeline for a return being murky, he could get off to a fast start and be one of this year’s breakout WRs.

Michel, a former first-round draft pick, is one of the winners of the summer. He goes from a crowded backfield in New England to a possible path to the starting RB job for an exciting offense in Los Angeles. Last year was quietly a very efficient season for Michel, despite a limited amount of work. He averaged his highest yards per carry average (5.7) as well as yards per reception (16.2).

At the very minimum, he should step into the vacated Malcolm Brown role, but if Darrell Henderson falters, Michel could take over with considerable volume. He is being drafted in Round 8-10 of recent redraft leagues.

31-year-old Latavius Murray is a cut candidate according to multiple Saints beat reporters. Jones, a UDFA from Notre Dame, suddenly looks like the RB to roster behind Alvin Kamara on a Saints team full of unproven offensive skill position players. 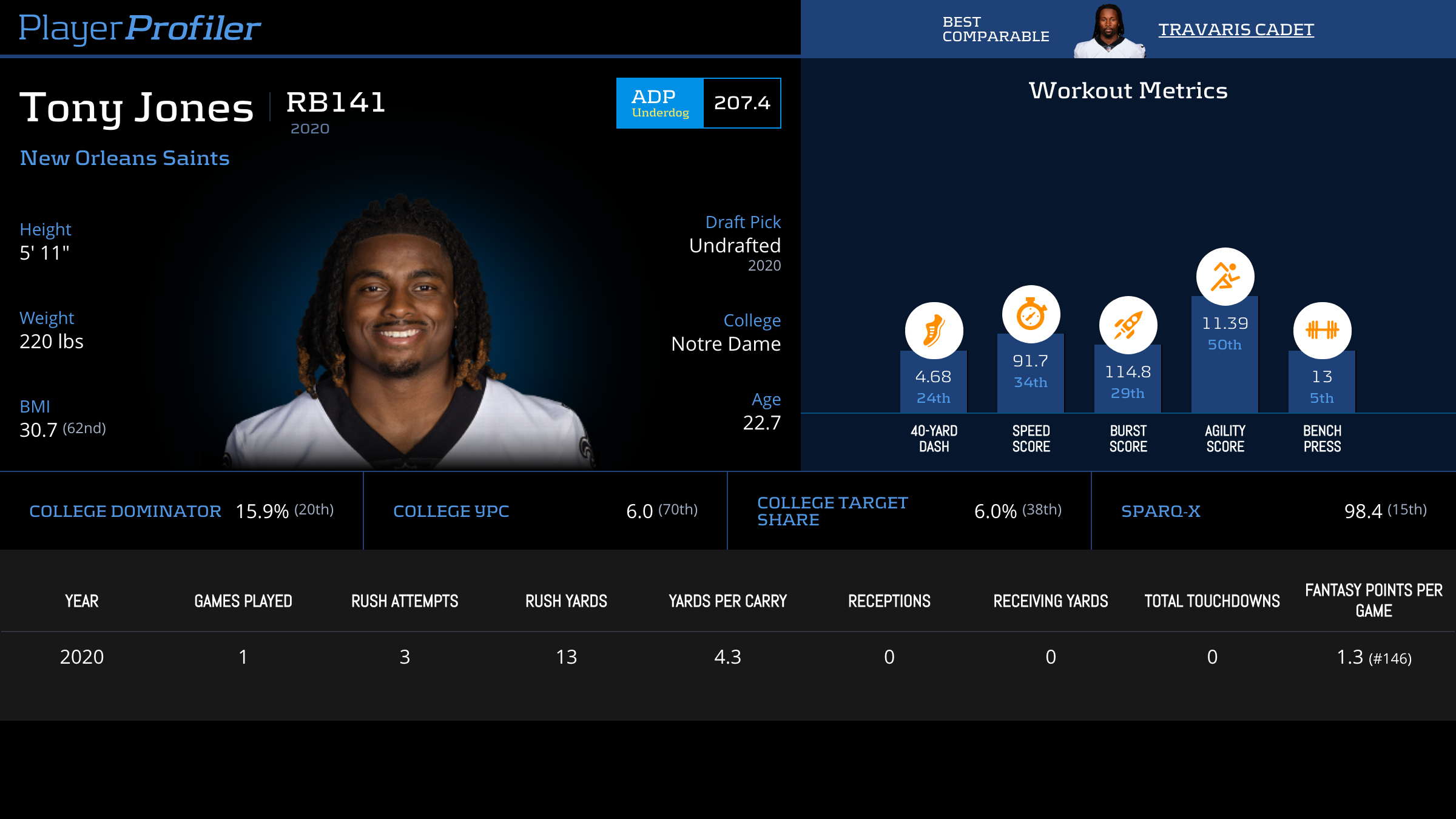 In Week 1 of the preseason, Jones rushed for 82 yards on seven carries while hauling in five receptions. The Saints are always dealing with a tight salary cap, and Murray is due to make $2.95 million this season. Jones should be drafted, and If he is available on your roster, consider grabbing him for RB depth and treat him as high-end handcuff.

J.K. Dobbins‘ season-ending injury is a crushing blow to many fantasy managers. But much like the situation with the Rams, one player lost is an opportunity gained for another. Enter Williams. Gus Edwards should assume the role of the starting RB. The Ravens extended the efficient Edwards in the offseason and they seem to have a great deal of confidence in him. But they have always mixed in multiple RBs and this season will not be any different. 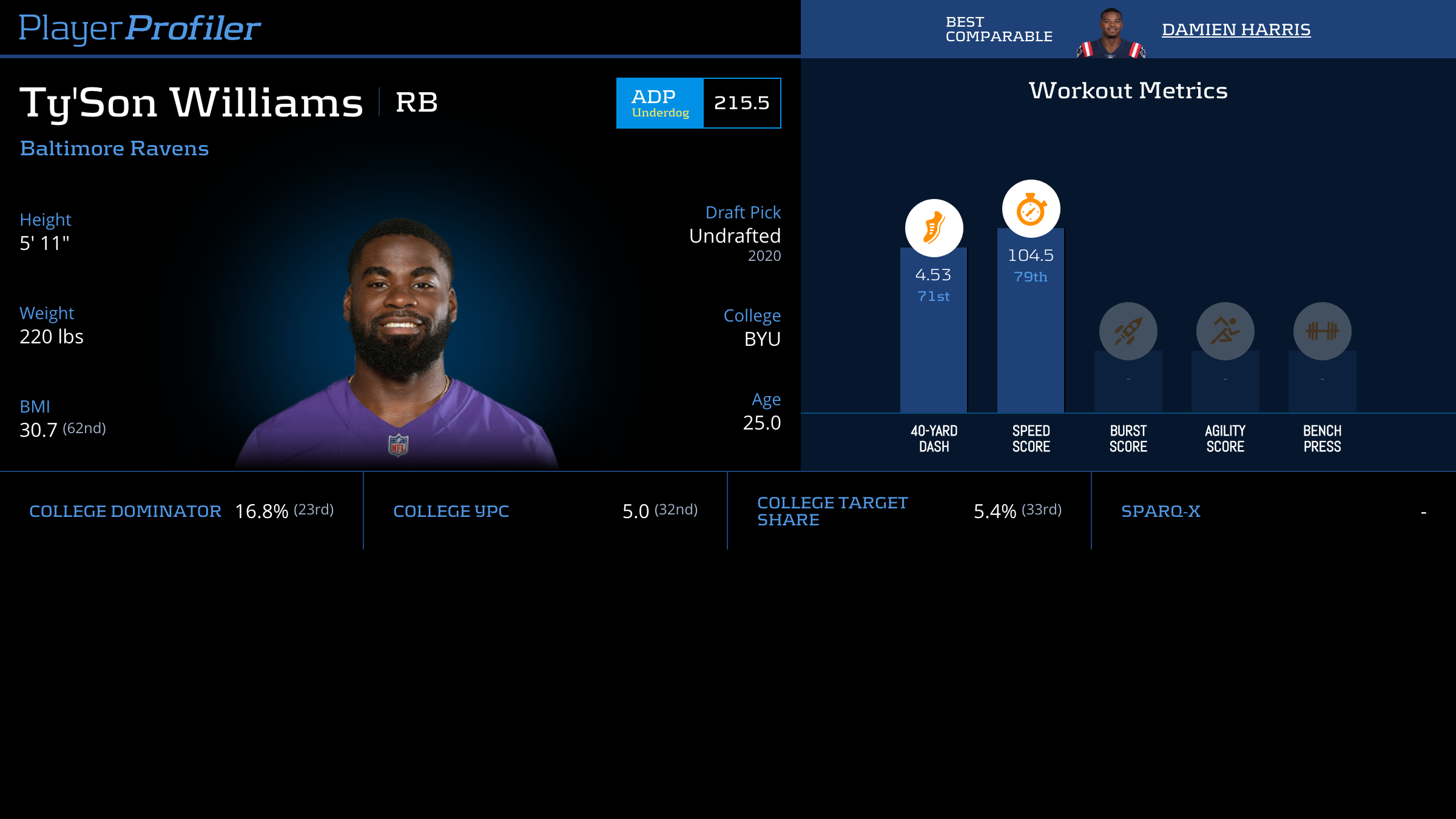 Williams was a practice squad player for Baltimore in 2020, but has looked very strong running the ball this preseason. He has good size at 220-pounds, and seems like a player who could take on a large rushing share if Edwards were to go down. This is an optimistic projection. Justice Hill is still around and could very much be in the mix, but I will bet on Williams. He is worth a FAAB bid.

Conklin was already set to assume the Kyle Rudolph role (and possibly more), and now will be thrust into an immediate starting opportunity with Irv Smith suffering an injury. Smith will have surgery and his timeline for a return is unknown. There has been speculation from the media that this could end his season. Conklin is a former basketball player who had one of the more impressive 2018 TE combines from an athleticism standpoint. He is the No. 1 TE to add on this list.

Brown, a third round pick from UNC, continues to make big plays in practice and in preseason games. He looks like a natural receiver and a potential deep threat. There is a perception he will not make an impact in 2021 because of a crowded WR room with Terry McLaurin, Curtis Samuel and TE Logan Thomas. But what if Brown is just better than Samuel?

Will Dyami Brown carve out a big role as a rookie?⚡️ pic.twitter.com/oaviaPG8Ct

Brown should at least be a player to monitor, and if you can get him for cheap in dynasty, he is the sort of player who only lacks opportunity and not talent/athleticism.

Hamler is a former second-round draft pick with sub 4.30 speed. He had a mixed rookie season and struggled with hamstring issues. So far this preseason, he has flashed big time with three catches for 107 yards and two TDs. If Courtland Sutton has a setback, look for Hamler to see a lot of work and have a potential weekly role in Denver.

Johnson was intriguing for deep leagues as a 6-4, 240-pound former WR converted to move TE. Now he has to be considered for all leagues, with Adam Trautman going down with an injury. Trautman escaped major injury, but he will be out at least a few weeks. Johnson could get out to a fast start and be a sneaky addition to teams looking for depth or potential upside at TE.

Parham is the perceived backup to Jared Cook in LA, but could carve out a sizeable role and eventually take over the job. He flashed last season at times, displaying the size and athleticism he showed in the XFL. A former college basketball player, Parham could be a real weapon in the red zone for the accurate Justin Herbert. He’s especially intriguing in dynasty formats with Cook being 34 years old.

Williams sat out last season, but found a nice landing spot in Chicago. We have seen him excel before in spurts for the Chiefs, including the fantasy playoffs in 2019 and the Super  Bowl. Now with Tarik Cohen on the PUP list, he becomes a very intriguing handcuff to roster. He should see touches to start the season, including some valuable targets in the passing game, and if David Montgomery were to go down, Williams would immediately be a potential RB2.