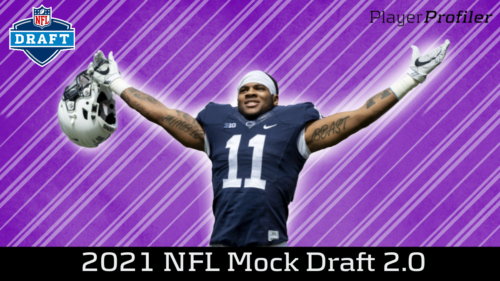 With Pro Days, NFL trades/free-agent signings mostly winding down, and the Senior Bowl in the rearview mirror, here is my version of how Rounds 1 and 2 of the 2021 NFL Draft will go.

This mock features a trade between the Washington Football Team and Los Angeles Chargers, with Washington moving from the No. 19 pick to No. 13 in order to make a move for a quarterback.

Trevor Lawrence was 38-2 at Clemson, finishing with an impressive 10,098 passing yards, 90 passing touchdowns, with just 17 interceptions.

NFL teams do not mortgage the future for one-year wonders like Zach Wilson, or question mark athletes like Mac Jones. Justin Fields and Trevor Lawrence have been the best prospects in this class since they were 16 years old, this hasn’t changed. Kyle Shanahan traded up to No. 3 for his guy and QB Collective standout.

The most polarizing prospect of the 2021 offseason has been Kyle Pitts. He came in at 6-6, 245-pounds and ran a 4.44 40-yard Dash at his pro day. A superior athlete and prospect to Mike Gesicki from 2018, and a closer comparison to Vernon Davis from the 2006 draft class.

The rumor as to why Philadelphia traded out of the No. 6 pick was that Cincinnati let it be known that Ja’Marr Chase was the top prospect on their draft board. As a GM, I would select Penei Sewell, but if getting Joe Burrow his top receiver from the 2020 National Championship team is what he wants, then dammit that’s what Mike Brown is going to do.

The best offensive lineman in this class was All-Big Ten all four years at Northwestern. Slater brings athleticism that is on par with Tristan Wirfs from the 2020 draft class, a true cornerstone piece for an uber-talented team in Miami.

In Mock 1.0, I had Ja’Marr Chase going to Detroit. With Chase gone, Detroit fills in the Heisman Trophy winner Smith, next to Breshad Perriman and Tyrell Williams.… eww.

Playing just one season at North Dakota State, Trey Lance made the most out of it, finishing with 1,100 rushing yards, 42 total touchdowns, and zero interceptions. Lance can do everything. If he was at Minnesota, Ohio State, or Wisconsin, he would be in the conversation for overall QB1.

It can be argued that Sewell is the second-best prospect in the draft behind Trevor Lawrence. At just 20 years old, he would help shore up the Broncos offensive line and protect Drew Lock, or whomever Denver goes after in trade or the draft.

All of Dallas Cowboys Twitter has been begging for a cornerback since the season ended. Here, they get their wish. Trevon Diggs welcomes his old Alabama counterpart to the reeling Cowboys defensive backfield.

Jump into a Best Ball draft today at UnderdogFantasy.com and use Code: Underworld

Profiling as a left tackle, Christian Darrisaw dominates in the run game. Starting for Virginia Tech as a true freshman, the Giants grab the last blue-chip lineman in this class to pair with Will Hernandez.

Howie Roseman does what Howie Roseman does: botch draft picks on wide receivers. Roseman is desperate for talent after missing in free agency, grabbing the speedster from Alabama that gained 848 receiving yards as a freshman playing with Jalen Hurts.

Complete dominance in 2020 with an ultra-talented Alabama team. Best Comparable to 2020 No. 1 overall pick Joe Burrow, Jones finished with 4,500 yards and 41 touchdown passes in 2020.

Restructuring Anthony Barr allows him to enter free agency in 2022. Minnesota is going all-in to win in 2021. After spending heavily on the defensive line over the last two years, the Vikings take Parsons to shore up their defense and take over for Barr in 2022.

The son of former Saints great Joe Horn is looked at as the top cornerback in the draft by many. The next Island Cornerback; think Jalen Ramsey, Richard Sherman, Darrelle Revis – Horn is for real, and Bill Belichick gets a gift at No. 15 here, allowing him to team up with or replace Stephon Gilmore.

The NEXT 🏝️ Corner!

Arizona dealt with injury on the offensive line in 2020, and currently have one of the oldest lines in all of football. Drafting Vera-Tucker brings versatility to the Cardinals; he played both tackle and guard at USC.

Zaven Collins is the most underrated defender in the 2021 NFL Draft. He finished with five interceptions, 7.5 sacks, 25 tackles for loss, and 236 tackles in three seasons at Tulsa. The Raiders have needed help at linebacker for three years, and they finally find the answer here.

In a COVID-affected season with limited live scouting, the Dolphins didn’t have to go far to watch Jaelan Phillips. He transferred to Miami in 2019, finishing with 15.5 tackles for loss and eight sacks in 10 games.

Blazing a 4.39 40-yard-Dash at his pro day, Newsome turned heads proving he was healthy and ready for the big time. He never played a full season in college, but the Chargers are willing to take that risk to pair him up with Derwin James and Michael Davis on the back end.

The Bears are in rebuild mode, whether they figure that out this year or in 2022 is up to them. Tevan Jenkins gives them an important piece: a developmental, versatile lineman that can play guard or tackle. He started 35 of 37 games at Oklahoma State, playing both tackle positions and right guard. 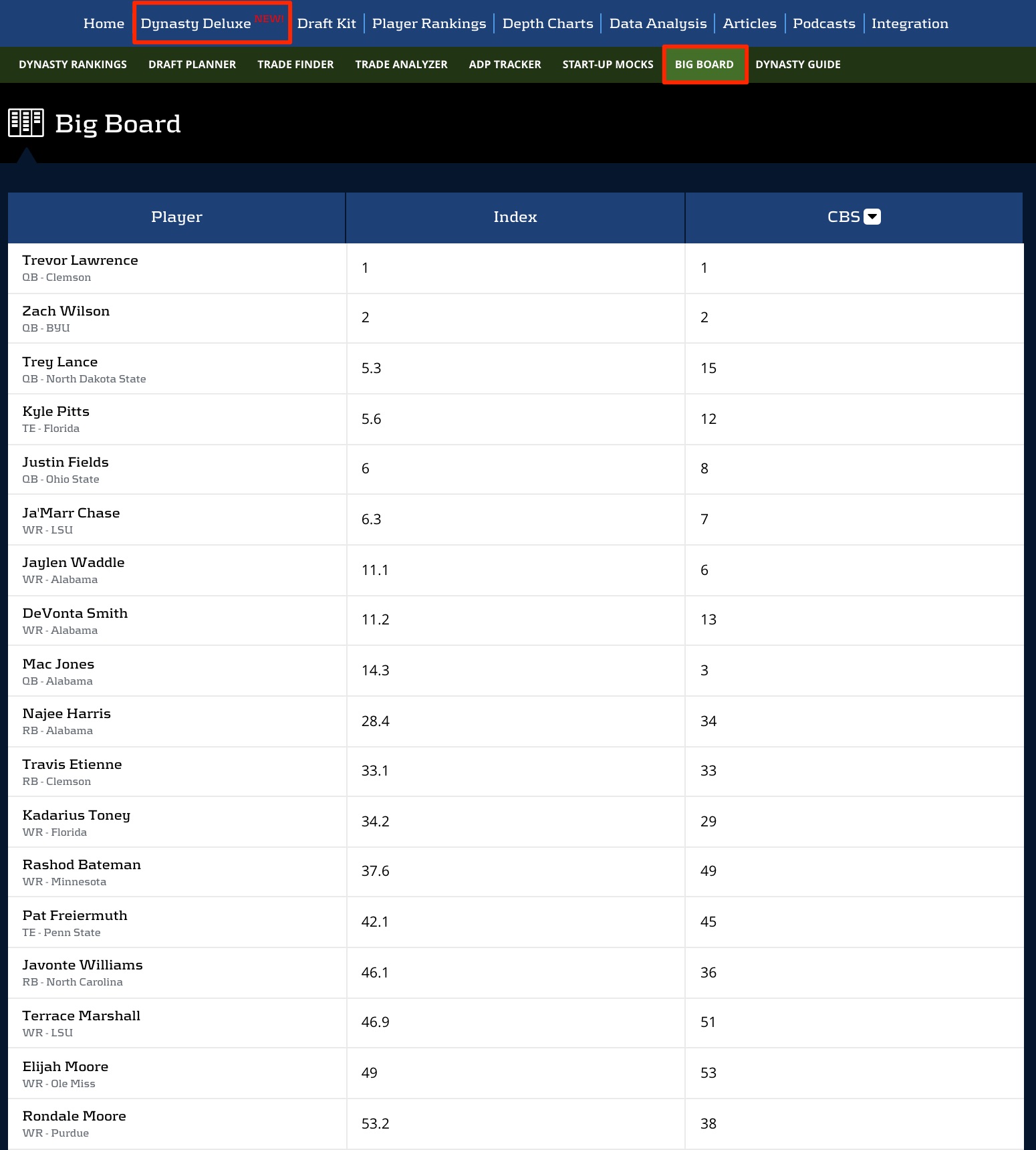 Liam Eichenberg never played next to Quenton Nelson at Notre Dame, but Nelson played a big part in luring Eichenberg to the Golden Domers. Last month, I had Dillon Radunz from North Dakota State here, but I am happy with either of these guys playing in Indianapolis in 2021.

When you look up the definition of “mauler” in the dictionary, a picture of Jalen Mayfield pops up. After whiffing in 2020 on Isaiah Wilson, the Titans right a wrong and take the road grader from Michigan.

Before the season, Caleb Farley was considered the top cornerback in the class. After opting out, and now dealing with a back injury, Farley’s stock has dropped to the end of the first round. Seattle originally owned this pick but traded it for Jamal Adams. Seeing Farley fall here would have to make Seahawk fans happy.

Injuries to Ryan Shazier and Devin Bush in recent years have left Pittsburgh thin at the inside linebacker position. One of the most athletic linebackers in the draft, Owuso-Koramoah lines up all over the field, blitzing from the middle, covering in the slot, or rushing the passer from the edge. Pairing him with a healthy Bush, Alex Highsmith and T.J. Watt will have offenses in panic for years to come.

With Jacksonville having four picks in the top-45, getting two defensive backs is a must. The Jaguars finished No. 31 in Points Against, No. 31 in Totals Yards Allowed, and No. 27 in Passing Yards Allowed per Game in 2020. They need help!

Kwity Paye weighed in 261-pounds and ran a 4.57 40-yard Dash at the Michigan Pro Day. After losing Larry Ogunjobi in free agency, the Browns added depth pieces in Takk McKinley and Andrew Billings. Paye will play with his hand in the dirt, taking advantage of one-on-one’s while Myles Garrett eats blockers on the other side.

The most impressive pro day of the year was in Penn State. What a shock. Jayson Oweh blew scouts away with a 4.37 40-yard Dash at 257-pounds. Yes, 4.37, drawing comps like Danielle Hunter from LSU who was a raw prospect coming out of college. Oweh would be a perfect fit in the Ravens defense, learning the rush linebacker position from Pernell McPhee.

Senior Bowl favorite and senior breakout Kadarius Toney profiles as a do-it-all slot receiver at the next level, something the Saints are missing. Emmanuel Sanders and Tre’Quan Smith were decent as second options to Michael Thomas, but neither stole the job. And with Sanders heading to Buffalo in free agency, Thomas gets a new running mate.

Green Bay has needed a No. 2 wide receiver since Randall Cobb and Jordy Nelson left in 2017. Elijah Moore fits the mold perfectly. Best Comparable to Tyler Lockett, Moore ran a 4.35 40-yard Dash at his Pro Day and finished with 1,193 receiving yards on 102 targets in just eight games in 2020. Boasting a 45.5-percent (91st-percentile among qualified wide receivers) College Dominator Rating at Ole Miss, Moore looks to follow in the tracks of former teammates D.K. Metcalf and A.J. Brown.

After a very underwhelming pro day, Gregory Rousseau drops out of top-10 contention in favor of his Miami counterpart Jaelan Phillips. The 6-7 Rousseau finished his redshirt freshman campaign with 19.5 TFL’s and 15.5 sacks before opting out of the 2020 season. Having only played in 14 college games, his versatility along the defensive line makes up for his lack of experience.

After back-to-back Super Bowl runs, the Chiefs released both starting tackles, something nobody expected. The No. 1 goal should be to protect the half-billion dollar man Patrick Mahomes, and the Chiefs get back on track picking up the former Longhorn. Cosmi played in 34 of 35 games at Texas, splitting duties at left and right tackle.

A luxury pick for the Super Bowl Champions, Tampa dealt with injury at guard and center often in 2020, playing with three different centers over the course of the year. Landon Dickerson played all five offensive line positions at Alabama, tore ligaments in both knees, injured both ankles, and still won the Rimington Trophy awarded to the nation’s top center. Tampa doesn’t need a lineman, but it’s a luxury to get a talent like Dickerson while picking at No. 32.

Blink and you'll miss him. 👀

Keep an eye on FSU DE Janarius Robinson as a potential #Cowboys target: