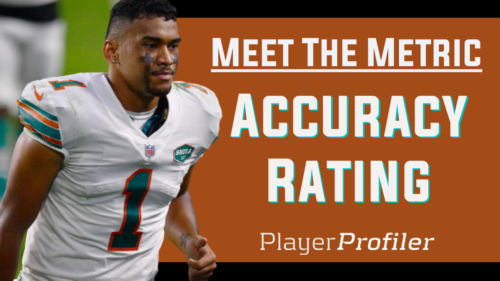 Accuracy is among the most important traits a quarterback can possess. They can be a perfect physical specimen, with the ability to create yards on the ground while having a cannon attached to his shoulders. But if he couldn’t hit the side of a barn door from five yards, his use to a real team, and by definition a fantasy team, is negligible.

But how do we truly gauge accuracy? Completion percentage is a good starting point, but does not tell the whole tale. A slightly scattershot signal-caller could be bailed out by receivers with preternatural talent and an ability to catch anything thrown their way. To better help us assess a genuinely accurate quarterback in the Underworld, we have Accuracy Rating. That is the latest subject in our Meet the Metric series. 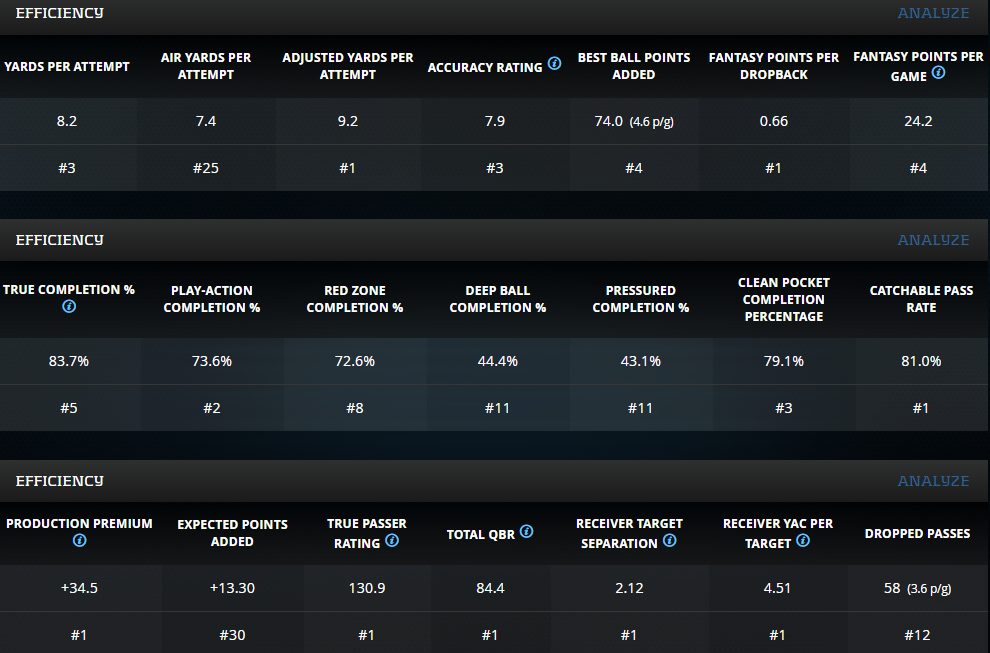 Quarterbacks with high Accuracy Ratings are a godsend to pass-catchers; these players will see a high dose of targets that they can actually do something with. A case in point is reigning league MVP Aaron Rodgers, who finished the 2020 campaign with a 7.9 (No. 3 among qualified quarterbacks) Accuracy Rating and led the league in delivering an 81.0-percent Catchable Pass Rate.

Being able to put the ball where you want to on-demand does not, however, immediately lead to fantasy success. Aaron Rodgers ranked No. 4 in Fantasy Points per Game last year, but he was helped along the way. His accuracy was aided by a league-leading +23.69 Supporting Cast Efficiency rating. Teddy Bridgewater also posted a 7.9 Accuracy Rating in 2020. Among the quarterbacks with at least 100 pass attempts last season, Bridgewater ranked No. 7 with a 78.9-percent Catchable Pass Rate. Yet he only averaged 16.1 (No. 22) Fantasy Points per Game. His supporting cast did not provide nearly as much help as Rodgers’s crew. Bridgewater “benefitted” from a -5.68 (No. 24) Supporting Cast Efficiency mark.

The top 12 quarterbacks in Fantasy Points per Game last season (with a minimum of 200 pass attempts) all posted Accuracy Rating marks of 7.1 or above. You have to drop all the way down to QB18 to find a player with a sub-7.0 rating.

I have gone some way towards establishing the link between an accurate quarterback and an efficient supporting cast. With this in mind, we should have high hopes for Miami Dolphins quarterback Tua Tagovailoa in 2021. He posted a 7.9 Accuracy Rating a year ago, the same as Aaron Rodgers and Teddy Bridgewater. He also delivered a Catchable Pass Rate of 80.3-percent in 2020. Only Rodgers and Drew Brees were better. Yet he managed a dismal 13.8 (No. 28) Fantasy Points per Game. Can we attach some blame to the players around him? With a -7.17 (No. 26) Supporting Cast Efficiency rating, you bet we can.

No doubt aware of this, the Dolphins went out and invested in Will Fuller on a one-year deal for 2021. Fuller was a revelation last year, playing with a quarterback who delivered a 7.2 (No. 4) Target Quality Rating on his way to a league-leading 11.7 Yards per Target. Fuller ranked also No. 2 at the position with 2.52 Fantasy Points per Target. His presence will no doubt lead to a bump in the cast around Tua, giving the second-year quarterback a legitimate playmaker to combine with his elite-level accuracy. He will be a bargain at his current QB20 ADP if he and Fuller can develop chemistry ahead of the season.