The NFL Draft is over, most free agents have been signed, and trades have been made. Barring any more major trades, we now know what each team will be working with in 2022. Before we move completely onto the next year, it is important to remember what players and teams found success in 2021. After all, a player’s fantasy success is largely tied to their team’s success. This series will serve to function as a reminder of last year’s performances and also take a look at who may breakout in 2022. Each division will have its teams dissected and I will find a player who should be a more valuable asset in 2022 than they were in 2021. Every relevant player leaving, every relevant player coming, and every draft pick is here. So without further ado, let’s take the AFC East Divisional Dive.

With Emmanuel Sanders and Cole Beasley leaving the team, Gabriel Davis will be the only other WR besides Stefon Diggs that was a starter on the offense in 2021. Yes, the Bills are bringing in Jamison Crowder and O.J. Howard. Yes, Dawson Knox demands red zone targets. But still, Davis ended the year on a four-touchdown performance in the AFC divisional round against the Kansas City Chiefs.

Josh Allen and Gabriel Davis working in the lab 🧪💪

Davis has a connection with Josh Allen, and it makes sense for the Bills to use him more often than they did last year. He only had a 10.9-percent (No. 87 among qualified wide receivers) Target Share, so that will definitely go up even with the new targets coming to town.

Hunter Henry finished last year tied for No. 1 among all tight ends with nine touchdown receptions. He finished as a top 10 tight end and he will look to repeat the same level of success. In my last series about TE surprises in 2021, I wrote about Henry and said that he will probably be boom-or-bust as most of his points came from touchdowns. If he does find consistent usage in this offense though, he will be a much better fantasy asset than “just a top 10 TE.” He has averaged at least 9.7 Fantasy Points Per Game in all five of his years in the NFL. If the connection between Mac Jones and Henry continues to grow, then lookout for a breakout season from the 28-year-old tight end.

This is definitely for deeper leagues as the Patriots are known for spreading the ball around. But what is exciting about this Tyquan Thornton draft pick is that he was the fastest WR in the 2022 NFL draft and the fastest WR that Bill Belichick has had.

LOVE the Tyquan Thornton pick for Mac Jones. Pushing the ball down the field will be a priority for New England and Thornton is a premier deep threat with great hands. Some guys run fast by grunting it out and then there are guys like Thornton who can simply fly.#NFLdraft

When you think of burners on the Patriots offense, your mind immediately goes to Brandin Cooks. He had 1,082 yards and seven TDs in 2017 with the Patriots. Thornton is even faster, but he is still a rookie on an offense that doesn’t historically lead to fantasy success.

Now the Dolphins have added Tyreek Hill to the receiving department. An excellent option for Tua, and an even better compliment to Jaylen Waddle. The Dolphins now have the league’s fastest WR corps. They also brought in a new head coach in Mike McDaniel, who was the offensive coordinator for the 49ers. Hopefully his offensive mindset and the improved WR corps can help Tua take a dramatic next step.

The tight end who had a 100.0-percent (No. 1) True Catch Rate last season and had the most slot snaps will be demoted from the second target to the third target on the offense. That is actually great news for Mike Gesicki. Take a look at his profile, and then remember that defenses will also have to cover Tyreek Hill and Jaylen Waddle every play. 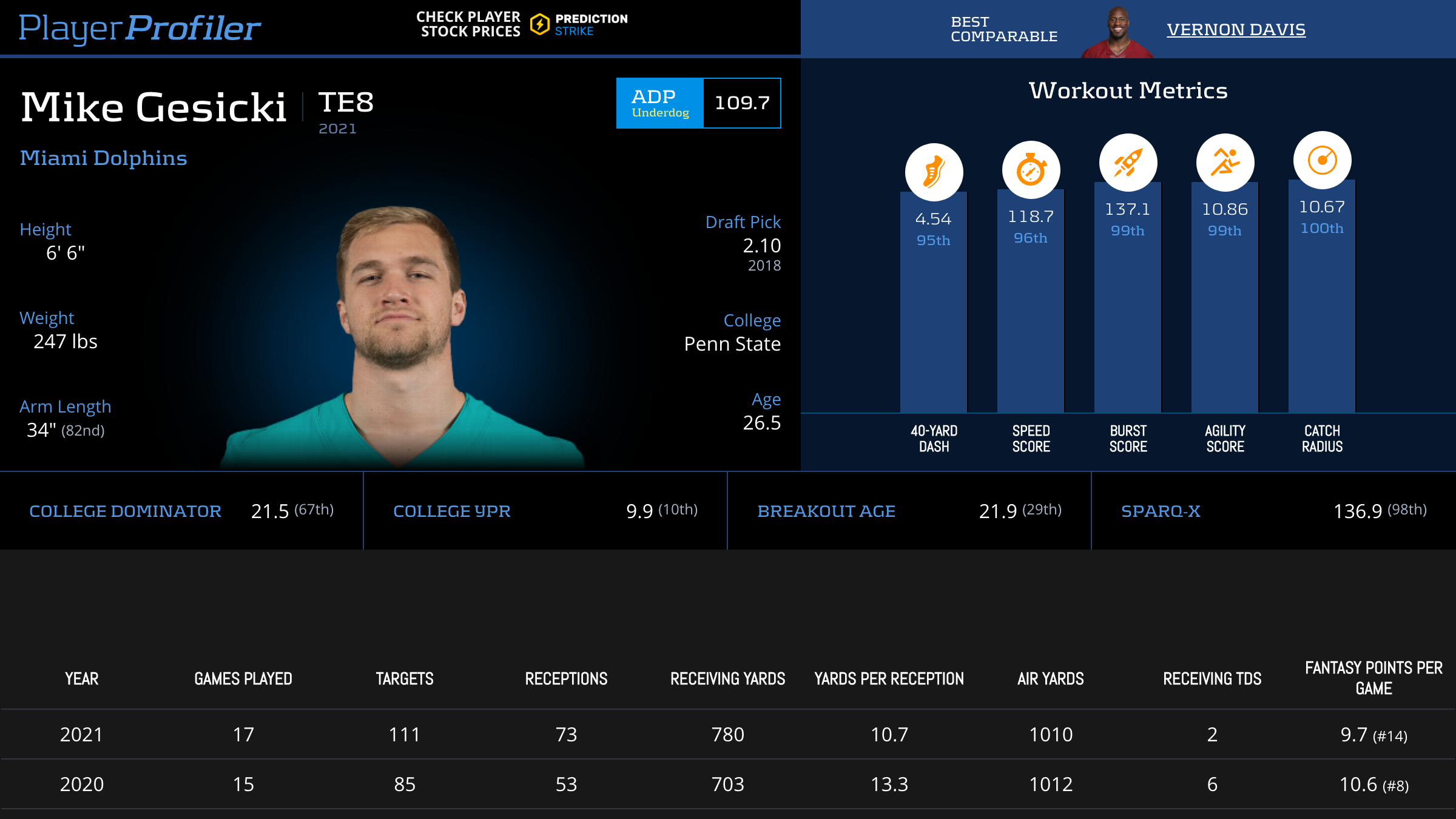 Gesicki should be open more often than not next year which should bode well for his fantasy stats.

The New York Jets drafted so well that any single weapon will probably have a hard time breaking out next season unless there is an injury. But that is excellent news for Zach Wilson. He will be able to throw to Garrett Wilson, Elijah Moore, Corey Davis, and Denzel Mims. Wilson will also have some pressure taken off of him by a solid run game provided by Breece Hall and Michael Carter.

The biggest winner of the 2022 NFL Draft so far has to be Zach Wilson.

Remember that Wilson was drafted No. 2 overall last year. If that potential is truly tapped into, then he will be a very valuable fantasy QB. He has all the supporting cast he could need.