Last week in this article, we had a few hits. Jeff Wilson looks like a weekly RB2 moving forward, Curtis Samuel followed up his big Week 1 with a reassuring 7-78-1 stat line in Detroit, and Carson Wentz passed for over 300 yards with 3 TDs. We also had a few misses. RIP my Rex Burkhead shares.

Week 3 is now on the horizon, and we need to keep improving our rosters. Hopefully, your team is 2-0 or even 1-1, but an 0-2 start in fantasy football is not a death sentence. We have some players we drafted with confidence that we cannot use (hello, Chicago pass catchers), and once again, we need to pivot off of injuries (Trey Lance and James Conner).

There are some apparent additions for leagues with fewer roster spots (Garrett Wilson– time to make it rain) and some options for those in deeper formats.

Trey Lance suffered a devastating injury and is finished for the season. Enter Garoppolo. Garoppolo is not exciting, but he is surrounded with weapons in WRs Deebo Samuel and Brandon Aiyuk and should soon have TE George Kittle back. Garoppolo, last year’s QB18 and 2019’s QB14, should be viewed as a locked-in QB2 moving forward. He is the top addition this week if he is available in Superflex formats and can fill in for Lance and Dak Prescott managers looking for a weekly floor option at quarterback.

Goff passed for four touchdown passes for the first time since 2018. This puts him at six on the season. The Lions have playmakers galore and emerging superstars in Amon-Ra St. Brown and D’Andre Swift, and Goff is steering the ship. Detroit has quietly scored 35 and 36 points in back to back games and has scored 29 points of more in five of their last six games dating back to last season. Goff offers you little to nothing as a rusher but will put up some excellent scoring outputs based on the talent around him.

I recommended Mariota last week, and he took a slight step back as a rusher in a difficult matchup against the LA Rams. Still, Mariota should have plenty of strong rushing games and has an emerging WR 1 in rookie Drake London, If head coach Arthur Smith can find a way to unlock tight end Kyle Pitts, this offense could see significant improvements.

James Conner exited the Cardinals come from behind win over Las Vegas in the second half with an ankle injury. The extent of the damage is unknown, but it looks like a split backfield if he is to miss time. Williams saw zero offensive snaps in Week 1. In fact, he only played special teams in Week 1 but saw an increased role in Week 2. He rushed eight times for 59 yards and caught two passes. Williams would be the best bet for the early rushing and goal-line work this week if Conner were to miss time. Williams had over 1,000 combined yards and eight touchdowns last season in Kansas City.

Benjamin is the less expensive way to play the Arizona RB situation. He caught six passes over the first two games of the season to go along with 12 rushing attempts, including eight this past weekend. Kliff Kingsbury has sung his praises all offseason. With a week to prepare, his role could grow even more significant this week against an LA Rams defense that conceded eight catches to running backs during their Week 1 loss to Buffalo.

Jeff Wilson looks to be the clear RB to roster in San Francisco, but Tyrion Davis-Price saw a very promising 14 carries this past weekend in his NFL debut. Jordan Mason, active ahead of Davis-Price Week 1, saw zero touches. We have witnessed Kyle Shanahan use multiple backs and have a Belichick-ian trigger when switching to a hot hand at RB. Wilson has never played in more than 12 games in a season during his entire career. Davis-Price should be rostered in all 12-man leagues moving forward and is a high-end handcuff. Prioritize him if he is available this week.

Damien Williams was sent to the IR, and Allgeier stepped into a medium-sized role with ten carries for 30 yards. Woof, not exactly the efficiency we want to see. He also saw no targets in the passing game, but he caught over 40 passes at BYU and is capable of doing so. Cordarrelle Patterson is a dynamic player, but he has never seen more than 153 carries in any season of his career. He is a two-way back and not a grinder by any means. Expect Allgeier to see double digit touches moving forward. His floor is limited, but Patterson is 31 years old. Allgeier would be a potential low-end volume play RB2/Flex if Patterson were to go down.

McKinnon is an option for those who play in deeper formats. Isiah Pacheco took a step back in week two, and Clyde Edwards-Helaire continues to be the Kansas City running back to roster, but McKinnon should not be ignored. He has caught five passes in two games, including a touchdown. The Chiefs have back-to-back challenging road games at Indianapolis and Arizona in the next two weeks, and McKinnon could see a slight uptick in usage.

So far, this is the waiver wire pickup of the year, and possibly for the entire season if he is available in any of your leagues. Sadly, even though I am in (redacted for IRS purposes) leagues, he is available in none of them. However, I am happy to have him on some benches, and he will be a staple of my starting lineup moving forward. The 21-year-old Wilson looked like a superstar this past weekend. Wilson caught eight passes for 102 yards and two touchdowns. He did so on 14 targets. 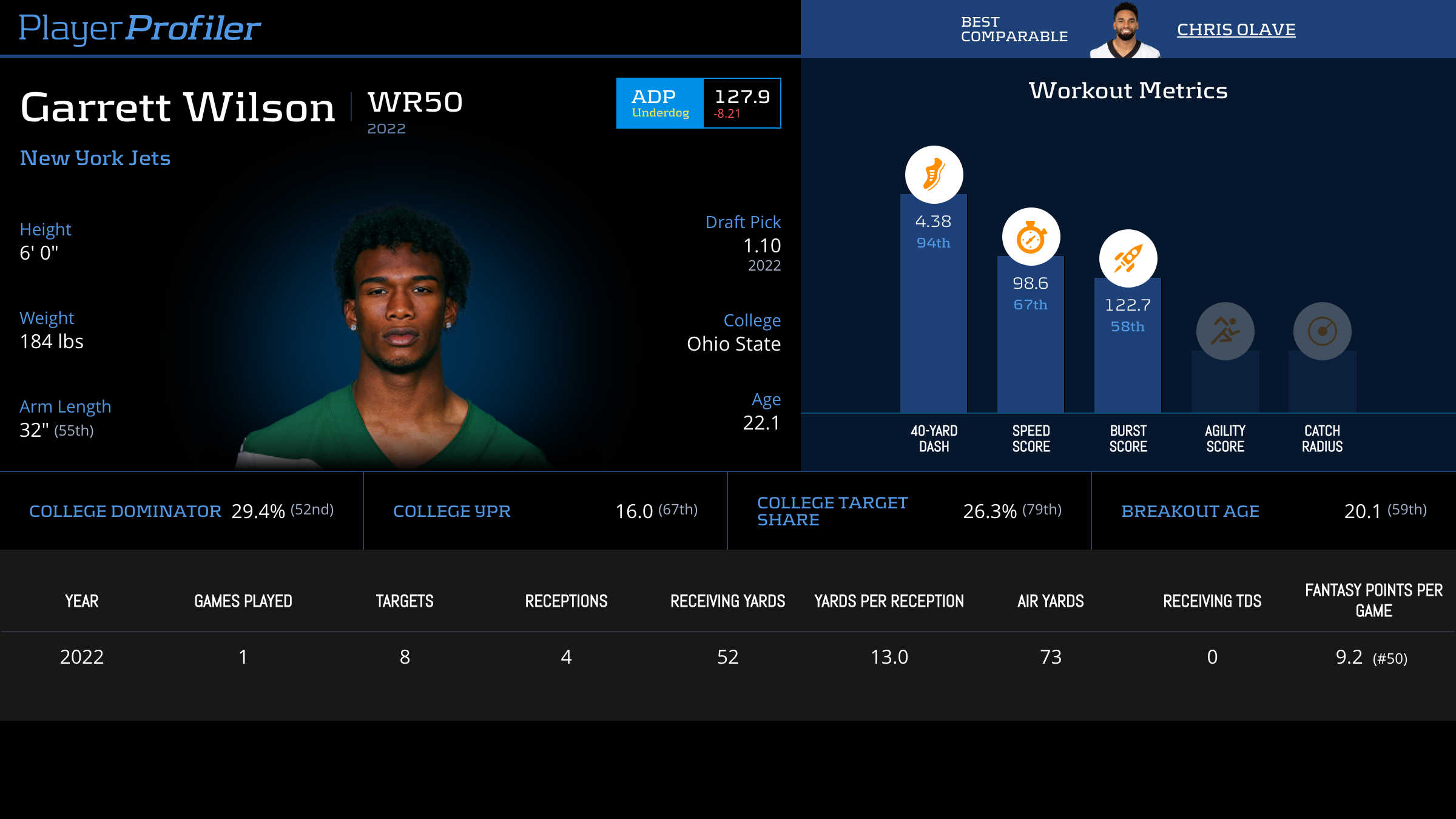 The Jets came from behind and won the game. This emphasizes Wilson’s importance to the team. Elijah Moore is not going anywhere. He should continue to be an every-down player and led The Jets in routes run yet again, but Wilson looks like the Alpha wide receiver of the future in New York. As a result, he is a WR 2 level player moving forward. We saw how Justin Jefferson‘s rookie year turned out after his breakout in Week 3 of 2020. There are some parallels here with Wilson in Week 2 of 2022. If he is available, make it rain. Opportunities like this do not often present themselves at the wide receiver position on the waiver wire.

Michael Pittman was out with an injury, and Alex Pierce was in the concussion protocol this past weekend. Dulin, not Parris Campell or running back Nyheim Hines, was the primary beneficiary. Dulin was second on the team in routes run and tied for the team lead in targets with six.

He ended up with five catches for 79 yards which led the Colts in both categories. Pittman will be back, as will Pierce, but Dulin is worth a pickup. The Colts have now scored 20 points total in eight quarters of play. They need playmakers and capable receivers. Expect Dulin to cut into Parris Campbell‘s snaps and potentially carve out a weekly role.

Shepard has quietly been a pleasant surprise this season in New York. A week after scoring a touchdown, he saw ten targets and caught six of them, leading the Giants in both categories. Kadarius Toney saw increased work but continued to work behind Shepard and Richie James. Also, Wan’Dale Robinson is out with an injury. Shepard should continue to be a low-ceiling veteran who can provide fantasy teams with wide receiver depth and the potential for bye-week fill-in starts.

Dortch followed up a 7 reception, 63 yard performance in the opener with a 4 reception, 55 yards, and a touchdown output in Week 2. With Rondale Moore out, Dortch will continue to see snaps. Add in the Conner injury, and Dortch could see some additional targets this week against the LA Rams. Dortch is still available in many deeper league formats and could be a fill-in for desperate WR teams this week.

(MONITOR GALLUP INJURY REPORTS IF BACK WEEK 3, PIVOT OFF BROWN)

Brown was a nearly every down player this past weekend. He played 52 snaps and ran 32 routes, and he trailed only CeeDee Lamb in these categories. No other Dallas WR saw more than 21 snaps. This puts Brown in a clear role as WR2. He rewarded the increased usage with five catches for 91 yards. This led Dallas in both categories. Dalton Schultz suffered an injury and the extent of it is unknown at this time, but if he misses, expect Lamb, Brown and RB Tony Pollard to see some increased targets. Michael Gallup could be back this week, which would be a significant hit to Brown, but that is no guarantee. Make a low bid on Brown if you need potential short-term help at the position.

What is dead may never die. A week after leading all Green Bay wide receivers in snap share, Watkins was far and away second to only Allen Lazard this past week. He also caught three passes for 93 yards, including a 55-yarder. We are waiting on Romeo Doubs (or Christian Watson) to see a more significant role, but for now, Lazard and Watkins are your Green Bay Packers wide receivers. Watkins may be 45 years old (or somewhere along those lines), but an almost every down WR for Aaron Rodgers should not be on the waiver wire in 20-man roster formats.

The Washington passing game has been one of the league’s most pleasant surprises through the season’s first two weeks. Thomas saw increased usage from Week 1 and caught five passes for 37 yards and a touchdown this past weekend. He finished as TE4 in 2020, and Washington rewarded him with a big contract. He suffered through injuries last season, and this past summer he looked to be fully back. TE needy teams could do far worse than Thomas.

I was surprised that Engram is only rostered in 21-percent of Yahoo Leagues. The TE position is a wasteland, and Engram can be a pivot play for Cole Kmet managers or anyone else unsatisfied with their TE production. He caught seven passes this past weekend. This gives him 11 for the season. He was No. 3 on the team in routes run, trailing only Christian Kirk and Marvin Jones Jr. 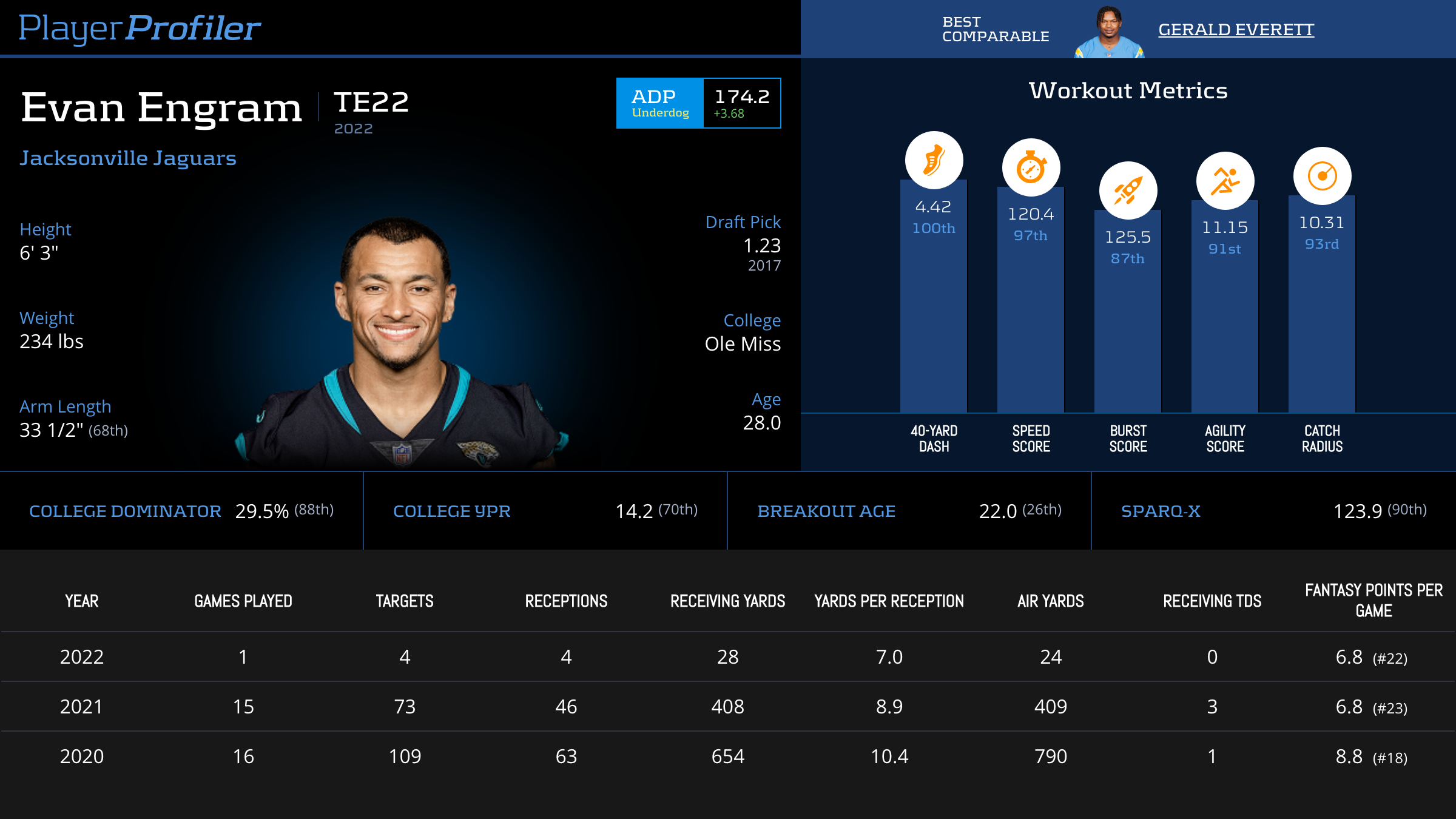 The Jacksonville offense appears to be ascending, and QB Trevor Lawrence has shown signs of improvement from his rookie year. 6.7 yards per reception is the lowest of Engram’s career, so expect this number to go up. As a result, a big game could be on the horizon.

Lost in the Breece Hall and Garrett Wilson breakout games this past weekend were the contributions from another new Jet in Conklin. A week after catching a TD, Conklin followed up with a Week 2 performance where he caught six passes for 40 yards on an impressive nine targets. Conklin now has 16 targets on the season. He played 100 percent of the Jets’ snaps this past weekend, and was second only to Elijah Moore in routes run.

I wrote about Hurst last week after his five-catch debut, and he followed it up with another five catches in Week 2. Hurst is unexciting, but he now has ten catches on 15 targets to start the season. The Bengals’ offense, despite their early season struggles, is a strong one and will put up some big scoring totals in the weeks ahead. Hurst may lack a high ceiling, but we are looking for weekly production that can get us through the week at TE, and Hurst provides that.