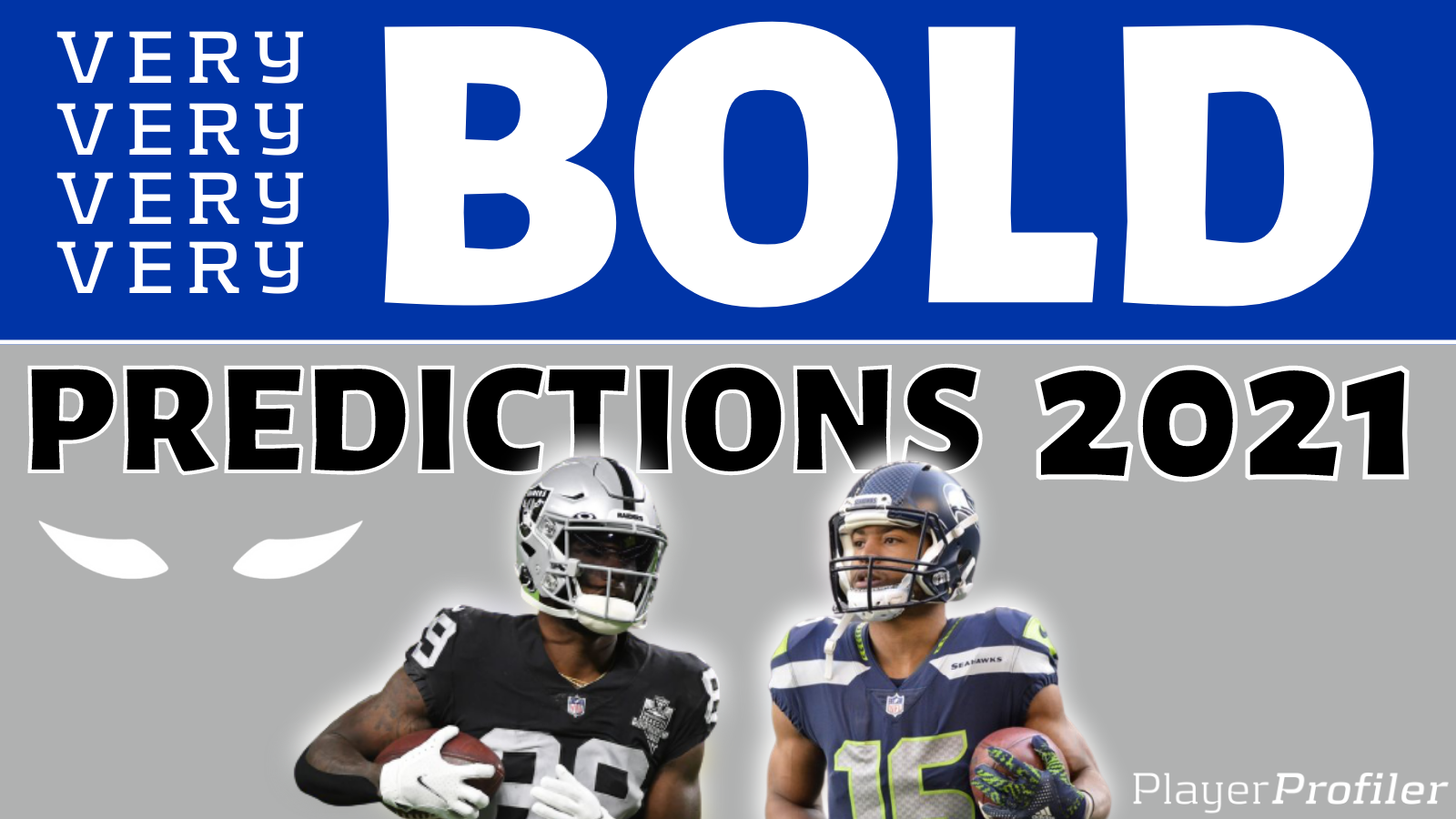 Listeners to the Mind of Mansion shows on Rotounderworld Radio will be familiar with the ending of the show. The Podfather will seek not just a bold prediction from his guest, but a very, very, very, very, very bold prediction. We are usually talking face-on-fire, blisteringly hot takes here. Usually, the guest is able to live up to the expectation.

With this in mind, the writers here at PlayerProfiler were tasked to do something similar. To delve deep within their footballing souls and come up with a take of their own for the season ahead. One so unbelievably bold and scorching that readers could shotgun a bottle of Chipotle Hot Sauce and be cooler than the take they had just read. I believe the writers have met this challenge exceptionally well.

I hope you enjoy taking onboard the information contained below as the team at the Underworld gives out their deepest and favorite Bold Predictions for 2021. Especially if you are a Seattle Seahawks fan OR a fantasy manager with Tyler Lockett and D.K.  Metcalf on a lot of your rosters. If our takes are to be believed, then that offense could be in for a MONSTER year. LET RUSS COOK!!!

I get it. The Eagles may be a dumpster fire this year and might move on from Jalen Hurts at any moment’s notice. However, this team will be trailing often, and Hurts has the profile we look for in a high-end fantasy QB. We saw him finish as one of the top QBs last season after starting the final few games for Philly. With a full offseason and his Konami ability, Hurts has the potential to fire at a Lamar Jackson-type rate back in his 2019 MVP season. Plus, will they really turn to Joe Flacco or Nick Mullens when the going gets tough?

If Hurts stays healthy all season, he has the skillset to finish as THE QB1 in fantasy this season.

Jakob Sanderson – Antonio Gibson establishes himself as the 1.01 for 2022

Antonio Gibson already did the hard part: learning how to play RB in the NFL. One of the 2020 class’ most efficient rushers is set to see his pass game role expand.

Gibson will finish the year outscoring every non-CMC/Cook running back, and set himself up as the leading candidate for the 1.01 in next year’s drafts.

Are you drafting Lockett in fantasy this year?🚀 pic.twitter.com/WFjcZ7i3Cj

Seattle is set up to throw more in 2021 than in 2020. They extended their aging RB in Chris Carson, still have oft-injured first round bust Rashaad Penny as their RB2, used their second round pick on WR D’Wayne Eskridge, signed Gerald Everett in free agency, and fired their OC, bringing in Shane Waldron from the Rams. This looks like a team ready to throw the ball more frequently in 2021, and Russell Wilson is one of the best QBs in the entire sport.

To finish as the WR1 in fantasy, a player needs the Target Share, the QB play, and touchdown variance, all of which Lockett has displayed in past seasons.

Neil Dutton – Hayden Hurst will be a TE1

That’s right, you read that properly. The Falcons spent the highest pick ever to select a tight end in Kyle Pitts this spring. He could, and probably should have the greatest rookie season for a tight end in history. But, and it’s a big but (editors note: so it’s THAT kind of party ;>), there are enough targets on offer on the Falcons for Calvin Ridley, Pitts, AND Hayden Hurst to eat. 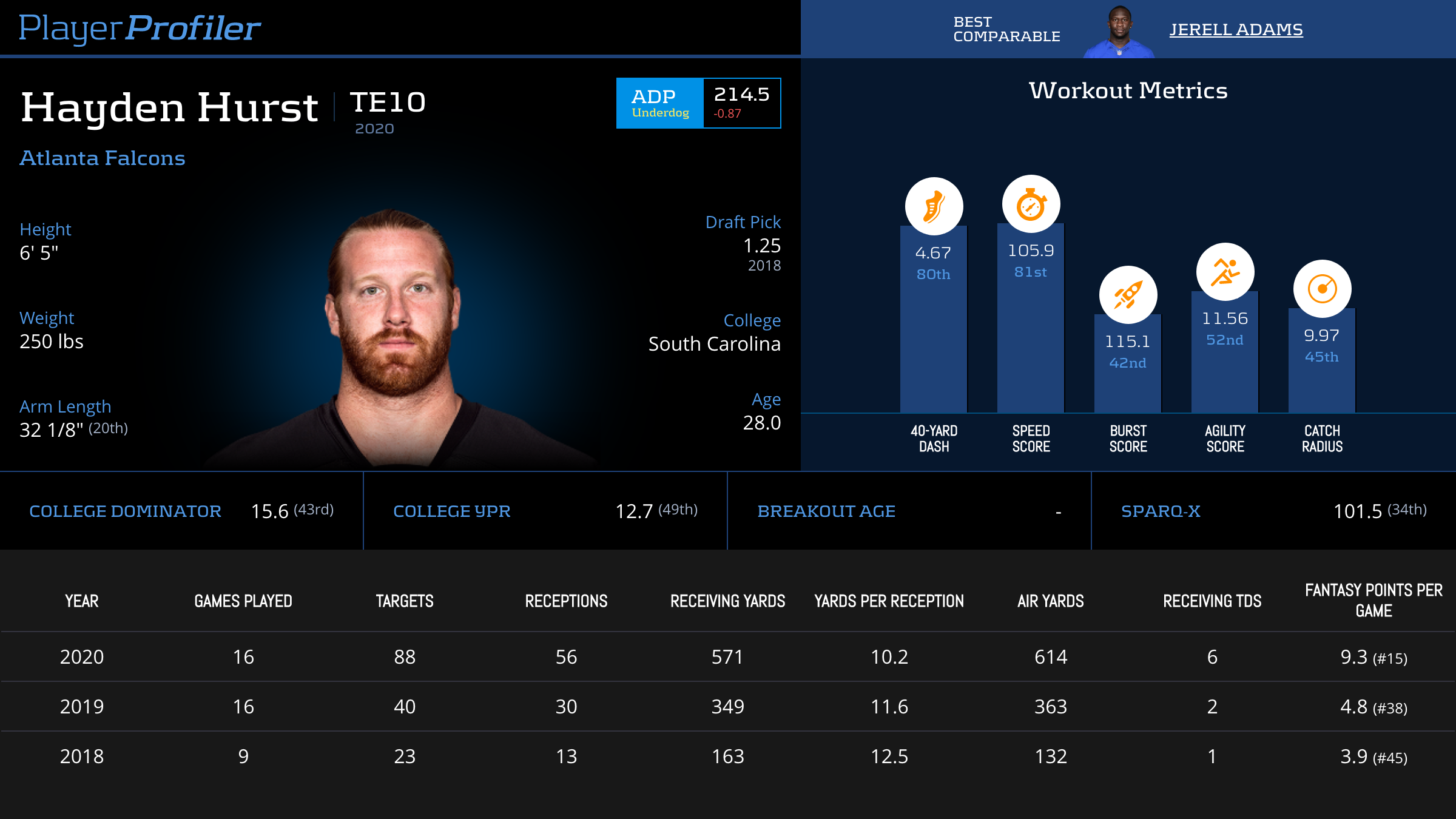 The Falcons have 195 targets up for grabs from 2020. Hurst was a fairly palatable performer last season, finishing No. 10 among all tight ends with 56 receptions.

With Falcons head coach Arthur Smith a fan of multiple tight end sets, Hurst AND Pitts will be on the field together. And both can deliver fantasy points in 2021.

With the news about Joe Burrow‘s recent struggles, this becomes even bolder I suppose. My theory here is simple, the Bengals defense is not good enough to win that team games. The offense is boasting three wide receivers, all either have great collegiate profiles or have shown success in previous years as a Top-24 wide receiver.

Couple that with Joe Burrow previously on pace for 600 targets last season, the volume and Game Scripts are primed to deliver on this bold take.

Aaron Stewart – Rondale Moore will be THE highest-scoring rookie WR this season in PPR leagues.

Despite being the seventh WR drafted in 2021, Rondale Moore will outscore Ja’Marr Chase, Devonta Smith, Terrace Marshall, and other receivers with more hype.

What a special treat for Week 1🔥 pic.twitter.com/5PmeDhdMjk

I called Moore a cheat code in Range of Outcomes and he’s shaping up to be a league winner in 2021.

John Earley – D.K. Metcalf posts the greatest season ever by a fantasy WR

The supremely talented D.K.  Metcalf enters his prime paired with Russell Wilson, one of the most consistent and efficient quarterbacks ever. In 2020, Metcalf finished with 943 (No. 5) Completed Air Yards, but he also finished with 840 (No. 6) Unrealized Air Yards. New offensive coordinator Shane Waldron was hired to bring Seattle’s offense out of the dark ages, and he does just that, unlocking the true, ungodly power of the third-year receiver.

Metcalf’s detractors might point to Tyler Lockett‘s presence as to why the Ole Miss product can’t reach such heights, but I’d say they have their own problems to worry about with a soon-to-be 29-year-old receiver who’s already nursing a groin injury.

Metcalf, with an extra game at his disposal, turns in 105 receptions, 1,550 yards and 22 touchdowns to pass Randy Moss’ 2007 firestorm as the greatest single-season performance by a fantasy wideout ever. Put that in your pipe and smoke it.

The talent isn’t the question, we all know who Antonio Brown is on the football field. Even in his reduced role last year, Brown had a 95.7-percent (No. 4) True Catch Rate.

Brown came ALIVE in the final few weeks of last season, even on comically low Snap Shares. All it takes is for Bruce Arians to realize who the TRUE ALPHA is in that pass-catching game or for an injury to hit either Mike Evans or Chris Godwin for AB to turn into the same target-hogging force he was in Pittsburgh just a couple of years ago.

Of all the receivers in Brown’s ADP range, nobody else has the talent or the resumé to justify a potential elite finish in the way he can.

Finishing 2020 with 79 (No. 52) targets, 600 (No. 61) receiving yards, and five (No. 34) total touchdowns was mighty impressive when you take into account Laviska Shenault‘s early and off-season injuries to his groin and hamstring. He finished with four consecutive six-plus target games, gets a big improvement at the QB position, and is healthy.

Shenault finished No. 127 out of 138 wide receivers in Average Depth of Target. This is good for fantasy points, think JuJu Smith-Schuster, Deebo Samuel, Robert Woods, and Cooper Kupp. Meanwhile, finishing No. 23 with 3.6 Yards After Catch per Target, think about Robert Woods, Cooper Kupp, Jamison Crowder, and Curtis Samuel.

Shenault is great company, in an improved offense and operating as the ALPHA Athlete in Jacksonville.

If you look at Saquon Barkley‘s ADP, it’s clear people are forgetting he’s a generational talent on a pretty underdeveloped offense. While the Giants added some receiving talent in Kenny Golladay, Kadarius Toney, and Kyle Rudolph, let’s face it, the o-line is in bad shape, and Danny Dimes can’t keep taking the beatings while waiting for routes to develop.

Even though the Giants are playing coy with revealing just how ready Barkley is, have no doubt: he’s better than ever, he’s going to get fed, and at age 24, he’s in the perfect spot to break his 2018 season numbers.

Kyle Shanahan’s job in the bay area is on the line and he has all of his chips down on the ultra-talented rookie that he traded up for. Jimmy Garoppolo is the week one starter for now but he will lose that job by Week 3.

Will Trey Lance earn the starting nod to open the season?⛏ pic.twitter.com/s4t3R19i39

San Francisco faces the easiest schedule in 2021 versus projected win totals and once Trey Lance is handed the keys, there are too many weapons for him not to smash in fantasy. Brandon Aiyuk, Deebo Samuel, George Kittle, and his own Konami Code ability will lead Lance to record over 35 total touchdowns and 800 rushing yards.

The 49ers are back this season and Lance is a league winner. Book it.

The superior backfield talent in Philly, Miles Sanders produced 5.5 (No. 13) Yards Per Touch and Top 20 marks for Juke Rate and Evaded Tackles in 2020. Even in a crowded backfield rotation, he saw a 76.3-percent (No. 7) Opportunity Share.

Offseason moves directed at improving an inefficient Eagles offense and Coach Sirianni’s tendency to lean on his starting ball carrier will only help Sanders smash his ADP. Congrats if you stole him in the fifth round.

The most underrated No. 2 wide receiver in the NFL, Gabriel Davis finished 2020 with double-digit fantasy points in four of the last six games after the bye week. In 2020, when Davis scored a touchdown the Bills went 7-0. Are we really to believe in Emmanuel Sanders and Cole Beasley? 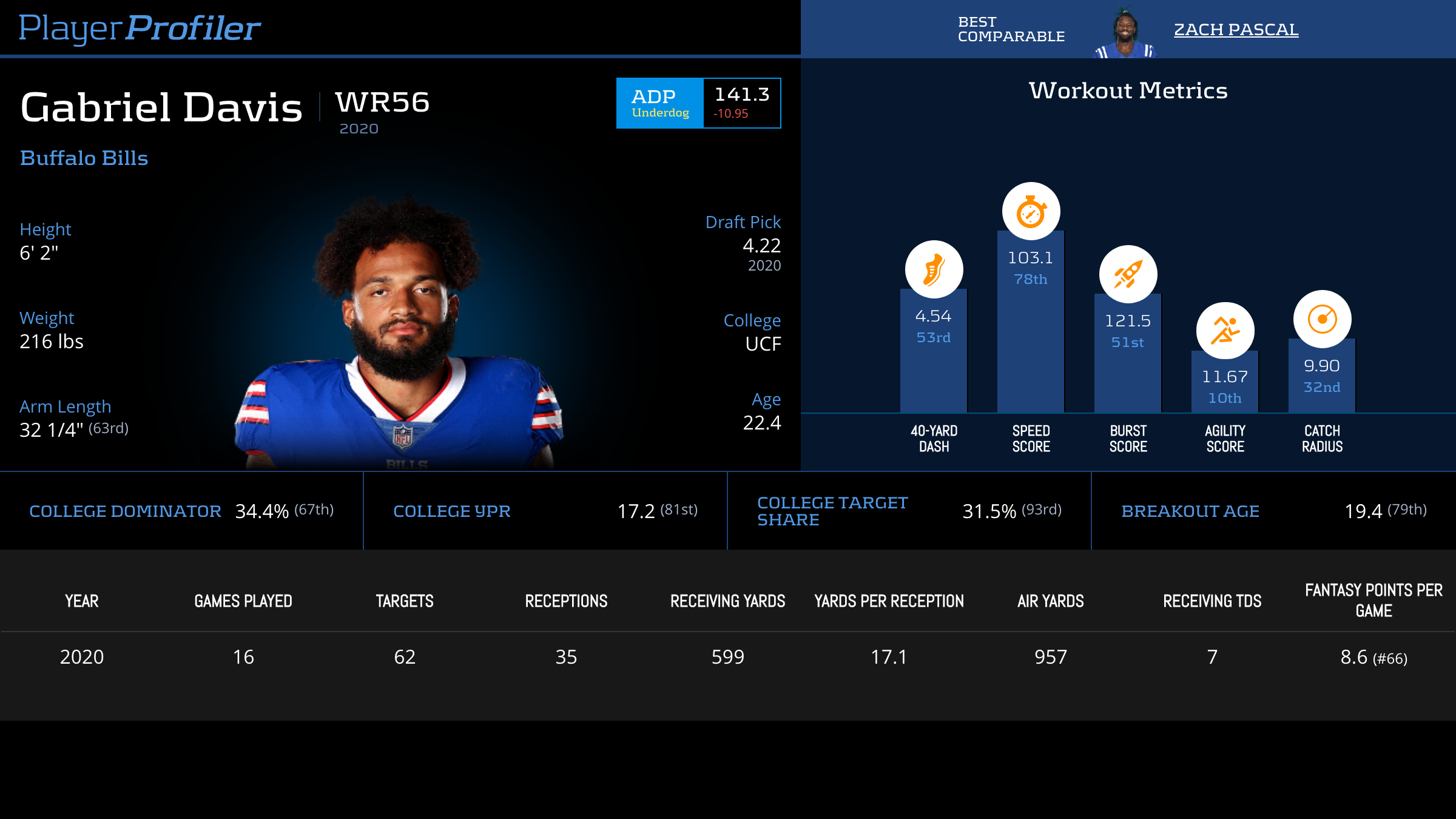 For the same reason we love Patrick Mahomes‘ top targets, we should be equally as excited for Josh Allens’ targets. Especially when he, the team, and Stefon Diggs have all vouched for the second-year star out of Central Florida.

Can ya boy Double R go two for two after nailing his James RB1nson prediction a year ago? Since a more than fair amount of my redraft and dynasty squads partly depend on Gerald Everett at least slightly beating expectations, I certainly hope so. Although this bold prediction suggests I think he’s capable of shattering such expectations.

Anyone familiar with my infamous Late Round TE Roulette series (which still may be happening this year, don’t give up just yet) will know that I value elite athleticism and exceptional weight-adjusted agility at the position. Add a 91st-percentile College Dominator Rating, four years of NFL experience with an offensive coordinator who basically brought Everett to Seattle with him, and a giant gaping hole at the ‘third receiving option’ slot for a Seahawks offense that is FINALLY set to be unlocked (THIS is the year this time, dammit!), and you have this year’s LRTE Roulette poster child. Last year’s five drops and subpar efficiency metrics aren’t exciting, but a 100.0-percent Contested Catch Rate on five targets makes me feel a small bit better about that.

You’re not allowed to be surprised when Everett smashes everyone’s expectations and finishes as this year’s rags-to-riches story at the TE position.

You have The Podfather’s permission to get excited about Edwards. And that’s the show.