Welcome to Week 5, Mad Caps. In previous years, this was considered the unofficial “quarter mark” of the football season. One fourth of the way through. And it should be considered the same this year, despite that additional 17th game. It is at this point that the fantasy community realizes some things; no one knows as much as they thought they did, and football really hurts (hence, the piling up of bodies in The Infirmary). It’s safe to say, 2021 is no different.

Week 5 is a bit different in a way, however. The amount of high profile players that are inactive is at a peak. Thursday Night Football kicked off the week with a great NFC West matchup, only to see Russell Wilson rupture a tendon in the middle finger on his throwing hand; an injury that will keep him sidelined for roughly six weeks. It’s not likely to get any prettier as the season goes along, but it’s OK! As Aaron Rodgers once said, R-E-L-A-X… The Infirmary has your back!

Wait, what?! What’s that you say? Fuller is hurt? Again? Yes. Yes, he is. It’s unfortunate, for Fuller is a dynamic playmaker when on the field. The key word is “when”. Now he’s off to the IR with a finger injury, and the Dolphins continue their descent into oblivion. With Thomas going down in Washington, quarterback Taylor Heinicke loses one of his top weapons. Perhaps Curtis Samuel steps up if he is able to go on Sunday. With Montgomery out, the Bears will rely on ex-Chiefs standout Damien Williams. Though nearing 30 years of age, he was productive last week rushing eight times for 55 yards and a touchdown, adding two receptions for another 15 yards. He’s safe to plug and play in all formats.

Holy rusted metal, Batman! I mean, holy broken footballers, Batman! The bodies are piled high this week, and some top names lay among them. In the NFL’s return to London, Matt Ryan and the Falcons will take on the Jets with a very thin receiver group. No Ridley and Gage is bad news for Ryan, though rookie tight end Kyle Pitts is an enticing option for this week. Also enticing, is Infirmary favorite Olamide Zaccheaus, who could be VERY busy Sunday morning across the pond.

The Giants will also be without a pair of wideouts in Shepard and Slayton. With Saquon Barkley beginning to roll and Kenny Golladay settling in, the offense will be fine without them. A name to watch is the controversial Kadarius Toney. Love him or hate him, he caught six of nine receptions for 78 yards in Week 4. And dude is fast; he clocked a 4.43 40-yard Dash at his Pro day and registered a 135.2 Burst Score (96th percentile among qualified receivers). Despite offseason rumors and concerns about him, Toney now has his opportunity with Slayton sidelined. And he’s only $4,000 on Draft Kings.

The Titans will be without Jones once again, but do get A.J. Brown back; something quarterback Ryan Tannehill must have been praying for. However, there’s a good chance they just let Derrick Henry run all over the Jags defense this week. The Bucs and Tom Brady are going another week Gronk-less but don’t bet on Cameron Brate or O.J. Howard. The bump goes to the WR room. Perhaps the biggest news of the week, however, is from San Francisco. Jimmy Garoppolo is out with a calf injury which makes way for rookie Trey Lance to make his first start against the soaring Arizona Cardinals. Get your popcorn ready.

In Dallas, Zeke looks likely to suit up but Cooper’s stays is not as certain. Being an afternoon game, those rostering Cooper need a viable backup option should the Pro Bowler not be able to go; it is a bad hammy, after all. Cook is iffy for the Vikings, but the smart choice is Alexander Mattison in this spot. Even if Cook plays, he’s not likely to get a full workload. Sure, The Infirmary has been low on Mattison, but in his relief appearance against Seattle, Mattison rolled for over 170 all-purpose yards. There’s no reason he can’t do the same against a porous Lions run defense.

Speaking of the Lions, both Williams and Swift are once again on the “Q” list but both should be on the field on Sunday. The same goes for stud tight end Hockenson, who has been dealing with a knee issue. Joe Mixon also looks likely to suit up, though like Cook, he isn’t guaranteed a full workload if he goes. While Samaje Perine is getting some attention, Chris Evans-a.k.a. Captain America- is the back to keep an eye on. The rookie has been used sparingly in a receiver role thus far, but Perine is not an impressive runner by any stretch. If Mixon is out or limited, Evans may be the guy to take a chance on. 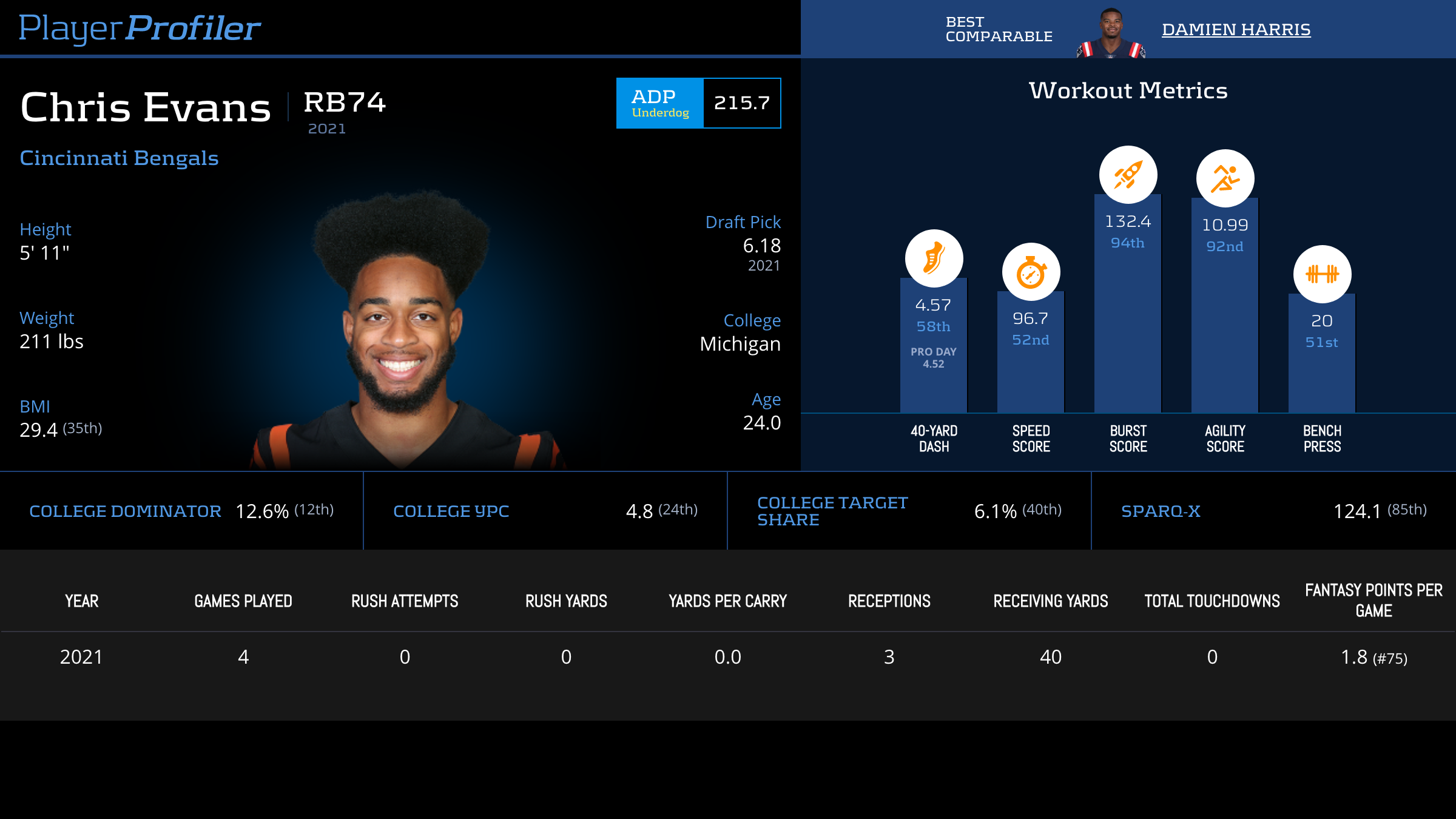 For the Cardinals, Edmonds and Williams are likely to go. Hopefully James Conner quits stealing Edmonds touchdowns. Right? Moving on. Gibson is also expected to play Sunday despite the shin injury. Good thing, because the Football Team’s running back is about to really get going. With no Thomas at tight end, and Terry McLaurin one of the only healthy receivers, Washington may be relying heavily on Gibson this Sunday. If Parker misses for Miami, perhaps a true breakout game for rookie Jaylen Waddle is in order. Yes, they play Tampa Bay, but the Champs secondary is beat to hell and the Fins will likely be trailing early. Let’s go Jake Brisket (a.k.a. Jacoby Brissett), it’s time to let loose!

This one is really simple. If McCaffrey sits, just play Sam Darnold, who ran for nearly as many yards as Chuba Hubbard and scored two touchdowns! I kid, I kid. You can’t play Darnold at RB!

As the season enters it’s second quarter, we are reminded what a fickle thing this game of fantasy football is. Injuries are an aspect of the game that can’t be predicted, so preparation becomes key. Having the depth to handle a series of injuries is the best one can do to defend against an injury annihilating the entire fantasy season. Even then, it’s still tricky. Well, if fantasy football was that easy, nobody would need to read articles like this! Since it isn’t that easy, rest assured The Infirmary is here for you each week. Now go get that popcorn, and settle in for week five.