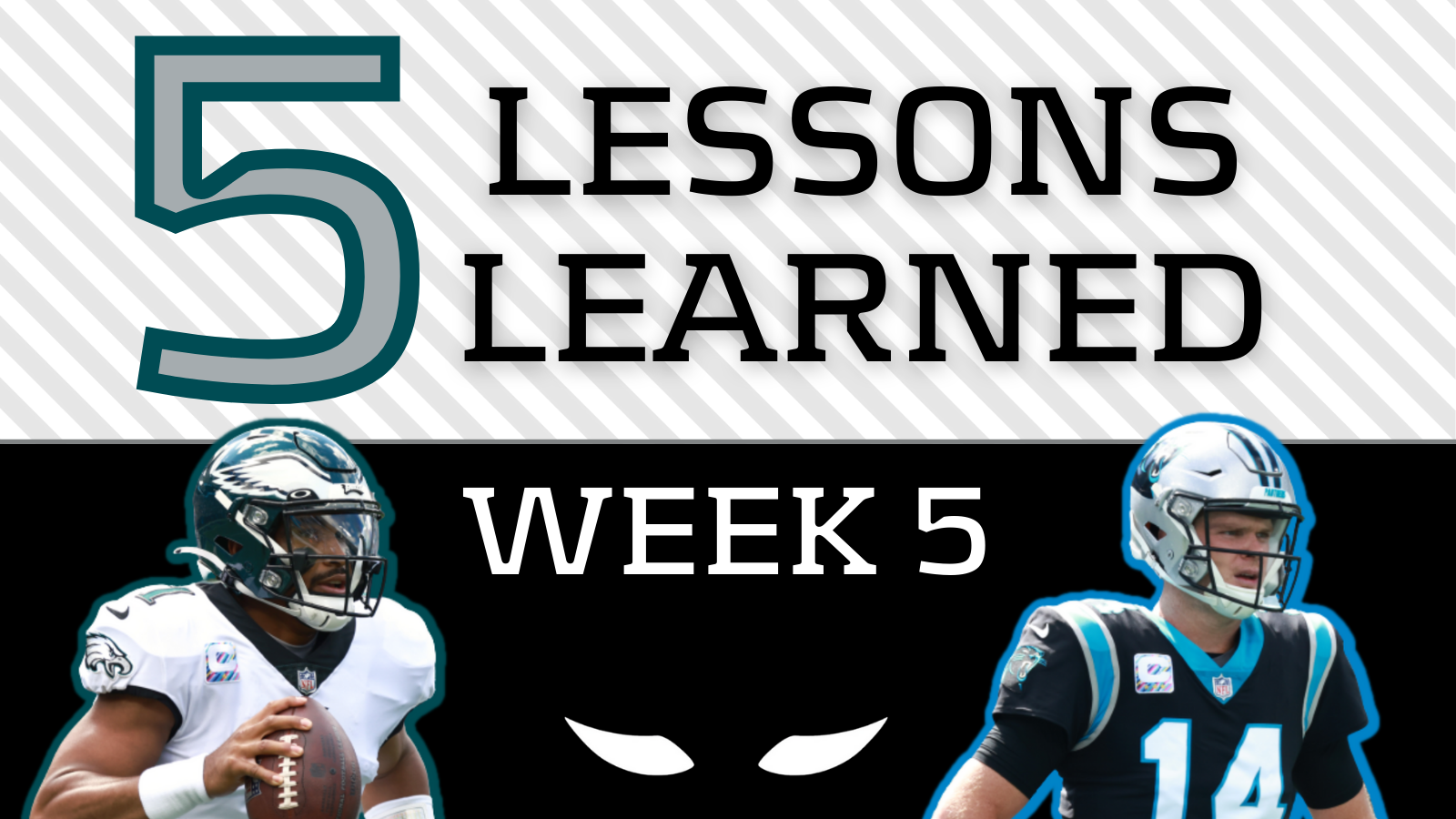 The Seattle Seahawks are on pace to give up the most yards in NFL history at over 450 yards a game. They are No. 30 against the run and No. 29 against the pass. After surrendering 476 yards to the Los Angeles Rams on Thursday night, Seattle has given up almost 500 yards per game since their Week 1 slog with Indianapolis. Opponents have scored in over 42-percent of their offensive drives.

On offense, the ‘Hawks have been bottom-half in yards gained… and that was when they had Russell Wilson! Now with a losing record, three games behind in their division, with no Russ for at least the next 4-6 weeks, and with starting running back Chris Carson facing a “recurring neck injury,” there will be little to stop opponents from piling up yards and fantasy points against Seattle. No matter how good Geno Smith looked in his one half of football, this is Geno Smith we’re talking about.

Play anyone & everyone against the Seahawks. Start your Steelers, Saints and Jaguars before the Seahawks Week 9 bye.

With this year’s No. 2 draft pick, and in desperate need of their first real franchise quarterback since Joe Willie Namath, the Jets had their choice of anyone not named Trevor Lawrence.

So, did they select the guy with the 96.1 (100th-percentile among qualified quarterbacks) College QBR, who completed 80-percent of his passes and threw for 464 yards in winning the National Championship game? No, they passed on Mac Jones.

Did they pick the guy who led his team to bowl games every year of his college career, topping his Power-5 Conference in passing yards two years in a row and is their No. 1 Career Passing Yards per Attempt leader? No, they passed on Justin Fields.

Well, then, they must have taken the prototypical modern NFL QB, the guy who rushed for 1,100 yards in his only full collegiate season while also throwing 28 TDs without an interception, the guy whose two Best Comparable Players are Matthew Stafford and Tony Romo, right? Wrong again. They passed on Trey Lance, too.

No, in true Jets fashion, Gang Green raced to the podium to select Zach Wilson of BYU, a guy who didn’t run particularly well in college and whose closest PlayerProfiler comp is Johnny Manziel. In his final season at BYU though, Wilson did lead his Cougars to impressive wins over Troy, Navy, Western Kentucky, Texas State, and a rousing Boca Raton Bowl thrashing of the 6-4 UCF Knights.

Of course, you can’t judge a quarterback by his first five NFL games, but instead of taking an easy choice at QB, the Jets figured they’d outsmart the league. How has that worked the last 50 years, guys?

After today’s Week 5 loss to a struggling Falcons team without their No. 1 receiver Calvin Ridley, Wilson now has four touchdown passes on the season to go against nine interceptions. He is averaging 4.0 rushing yards per game. Wilson and the Jets have a long way to go.

Continue to Avoid the Jets. Especially in redraft, move any that you have if you can get anything for them. In dynasty, hang on to rookies Elijah Moore, Michael Carter, and even Wilson if you’re confident things might change someday but don’t expect much this year.

In 2018, Sam Darnold had the misfortune of being drafted by the Jets, where his primary targets were guys like Robby Anderson and Jamison Crowder.

Sam Darnold is now in Carolina on a better team with a better receiving corps and Christian McCaffrey, the best receiving back in the game. The team started 3-1, and Darnold was the talk of the town. With almost 300 passing yards per game and an amazing five rushing touchdowns in just four games, he was considered a rousing success for the rising Panthers, being reborn under head coach Matt Rhule and offensive coordinator Joe Brady.

But were things really as they appeared? Or did Week 5 bring his performance a little more into the light?
For starters, those five rushing TDs have come on just 22 attempts, those at less than 3.0 yards per carry. As to his passing chops, Darnold now has six TDs and six interceptions on the year. That’s actually a worse rate than he had in New York. His 3.3-percent Touchdown Rate in 2021 is also lower than his New York numbers, especially startling given his last two Jets campaigns came under Adam Gase! His 2021 passing efficiency metrics across the board have been middling at best, including a -10.4 (No. 38) Production Premium, a 74.0-percent (No. 19) Catchable Pass Rate, and a 71.3-percent (No. 17) Clean Pocket Completion Percentage.

You know what to do with Darnold👏 pic.twitter.com/mV5TiVyxeh

So, Sam is who Sam is: a guy who throws about the same number of TD’s as interceptions and doesn’t run particularly effectively.

Carolina will live or die on their defense, Christian McCaffrey, and D.J. Moore. When McCaffrey comes back, he’ll get the goal line carries. Take that away and Sam’s not going to do much for your fantasy team.

Sell Darnold now and take whatever you can get. Look at your league’s QB-needy squards- e.g., teams with guys like Russell Wilson, Daniel Jones, or Tua Tagovailoa. If you don’t see much interest after Darnold’s weak Week 5 showing, hang on for upcoming matchups against Minnesota and Atlanta and then move him if you still can.

Jalen Hurts is just fun. He’s fun to watch and fun to have on our fantasy teams.

While maybe not yet one of the most refined quarterbacks, he’s fearless, ranking No. 4 in PlayerProfiler’s Danger Plays, Interceptable Passes, and Money Throw metrics. Heading into Week 5, the Eagles’ 5.1 (No. 1) Receiver YAC per Target more than compensate for Hurts’ lower 7.3 (No. 26) Air Yards Per Target, together keeping his passing yardage numbers in the top 10.

Hurts epitomizes the modern NFL QB. In today’s NFL, and especially for fantasy football, rushing is the Konami code and Hurts provides plenty of that. Leveraging his 4.59 (94th-percentile) 40-Yard Dash and 123.8 (91st-percentile) Burst Score, Hurts was No. 2 among QBs in carries, carries per game, and rushing yards heading into Week 5. He put up nine more carries and two more rushing scores against Carolina.

This was a heck of a play by Jalen Hurts. Gusty win. pic.twitter.com/Dl8vGzp1K5

Hurts has now posted more than 20.0 Fantasy Points Per Game in every game this year and is an every-week starter. It’s early in 2021, but, so far he ranks No. 3 in FPPG, scoring even more so far than Konami QB Lamar Jackson.

It is a shame to see the pain and suffering so many of these players go through performing the sport we love. And 2021 has been especially bad.

What all this tells us is that, for whatever reason, we’re losing key players every week. And, while we don’t want to see it, we have to expect more of the same.

Plan for the worst. Cycle through the better backups that are still available. In 2021, you need insurance, whether for your own guys or, better yet, to grab the backup behind someone else’s starter. Guys like Darrynton Evans, Chris Evans, or even Marlon Mack might still be available as good insurance bets. If you hear of a starter battling injury and their backup is still available, stash him if you have room. Getting ahead of the next Taylor Heinicke, Jacoby Brissett, or Davis Mills can keep you afloat while you wait for your Russell Wilson to return. Once a top starter is hurt, though, don’t overbid with FAAB for that next guy. Unfortunately, there’ll be more guys the next week and it’s much cheaper to cycle through backups before their price skyrockets.