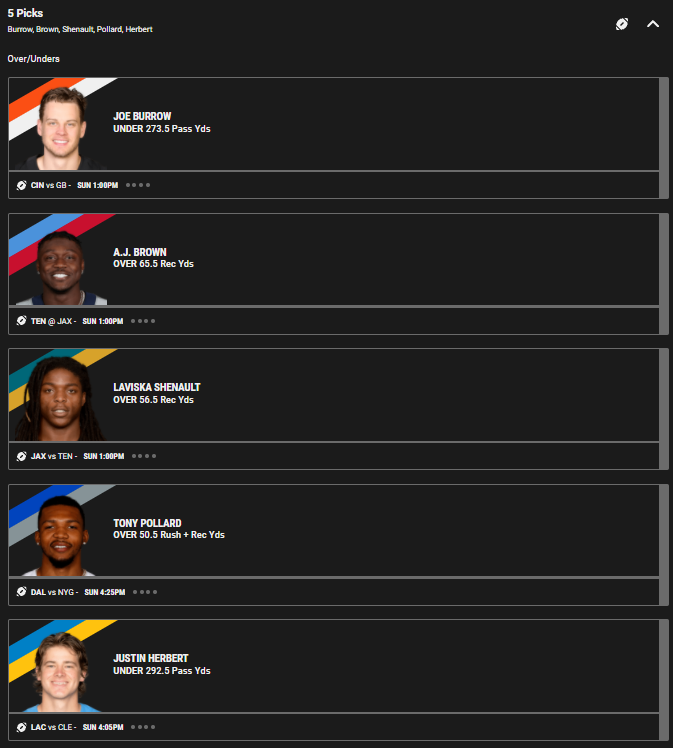 This pick will snap my losing streak for the Higher than high confidence picks when Laviska Shenault crushes the Over on the 56.6 receiving yards line this weekend. The first and most obvious reason why every fantasy gamer is on Shenault this week is because D.J. Chark was placed on the injured reserve with a fractured ankle.

Consequently, the 5.5 Targets Per Game are up for grab and Shenault will snatch the majority of these with a bigger role.

Jaguars OC Darrell Bevell says there will be a bigger role for Laviska Shenault with DJ Chark out (also said some more playtime for Jamal Agnew).

Shenault’s 19.9-percent Target Share (No. 41 among qualified WRs) is set to boom when he matches up against a Titan’s defense that allows the 10th most passing yards per game.

The hyper-efficient Tony Pollard will rack up yards on Sunday in a game with a 52 point over/under. This line is a bit high for a running back with a 37.5-percent Opportunity Share (No. 45 among qualified RBs), but Pollard is highly efficient with his 6.3 True Yards Per Carry (No. 1). The Cowboys run 30.3 Team Run Plays Per Game (No. 7), so Pollard will continue to have an opportunity to splash big plays with his 10.8-percent Breakaway Run Rate (No. #3). Finally, a +2.27 Game Script (No. 8) means that Dallas typically plays with a lead, resulting in plenty of chances for Pollard to crush this line.

A.J. Brown’s hamstring looks good for Sunday and so does this line. Jacksonville allows 312.2 passing yards per game, the 3rd most in the NFL. The Titans will look to exploit this, as they run an above average 38.0 Team Pass Plays Per Game (No. 10). Brown will return to an elevated target share, with the absence of Julio Jones, resulting in more opportunities to beat cornerback Shaquill Griffin. Griffin, with his +8.5 Coverage Rating (No. 85 among qualified CBs), is going to get torched by Brown.

Of course there is some risk in taking the Over on a player returning from a hamstring injury, but this is exactly why his line is so low. The matchup, paired with the volume opportunity, gives me confidence that he will cruise past 65.5 receiving yards this weekend.

Justin Herbert will be tested against Cleveland, a team with a strong defense and an offense that controls the time of possession. The Browns allow only 183.8 pass yards per game and have 14.0 sacks through Week 4, making the case strong to take the under on a passing yards line. Cleveland’s offense will provide a challenge for Herbert to eclipse 292.5 passing yards because they run league high 35.0 Team Run Plays Per Game (No. 1) with a slow 1.87 Pace Of Play, which limits the time of possession and total drives for opposing offenses. I’ll let the Chargers’ strength and conditioning coach cut my hair if Herbert is somehow able to produce over 292.5 passing yards.

This is a sneaky line because the 50.5 over/under lends one to believe that Joe Burrow will chuck the ball in a shootout, but the metrics tell another story. First, the Packers defense is no pushover, allowing only 221.2 passing yards per game. Second, the Bengals run a bottom rate 26.8 Team Pass Plays Per Game (No. 30), leading to a slow 1.76 Pace of Play. This game is a trap for those expecting a shootout.

It was shocking that Jaylen Waddle didn’t produce over 49.5 receiving yards in Week 4. His 81.6-percent Snap Share was in line with Week 3, but his targets dropped from 45 in Week 3 to 28 in Week 4. Truly unpredictable and unfortunate.

Tyler Higbee is becoming a touchdown dependent fantasy option. He only ran 26 routes in Week 4 and his 6 targets continue to be shallow, shown by his 89 Air Yards (No. 26 among qualified TEs) through Week 4. I will continue to fade Higbee if these trends continue to occur.

Things went my way with Noah Fant this week, with his routes jumping from 16 in Week 3 to 35 in Week 4. His volume also received a boost with a whopping 10 targets for 6 receptions.

My crystal ball successfully predicted that Clyde Edwards-Helaire would smash Philadelphia’s weak rushing defense. CEH compiled 114 total yards on 14 carries and 2 receptions. He seems to be efficient against rush-friendly defenses, so I’ll continue to take the Over on his lines in these situations.

My confidence in taking the Over on this line was based on the fact that Robert Woods averages over 1 rush attempt per game and each attempt has averaged over 4.5 rushing yards. However, he did not get a single rushing attempt in Week 4. 👻