Despite playing in several fantasy football leagues each year, my main league is a Dynasty SuperFlex 0.5 TE-Premium league. Recently, I’ve traded several of my rookie picks as part of deals to land established stars for a championship run. Without picks, I haven’t been able to fully experience rookie drafts. To scratch that itch, in this piece, I’ll explain my thought process during a rookie draft with the same settings as my main league. I approached this draft as if I actually have the team in my league, which you can see below. Again, for context, this is a 12-person, Dynasty SuperFlex, 0.5 TE-Premium, 6-PT Passing TD league.

For rookie drafts, I try to simplify the process as much as possible. Rookie drafts are as much an art as they are a science, so my strategy is simply to draft based on talent and positional need first, and later players with paths of least resistance to playing time.

What immediately stands out about my team is that I lack QB depth. Should the opportunity arise, my first order of business will be to take a quarterback.

One other concern is that my team is on the old side. Soon, I’ll have to make a choice whether to tear this roster down to prepare for a rebuild or to extend my window. If I’m in a good position to contend again next year, I’ll need more wide receiver depth. While I’m high on D.J. Chark this year, and while there’s a path where he busts and while John Brown, Brandin Cooks, and Marvin Jones might have FLEX2/3 value this year, I don’t want to rely on any of them next year. After quarterback, my next position of need is wide receiver.

Lastly, I would also like to draft at least one running back. Besides Saquon Barkley, my running backs are question marks. I have faith that Barkley + Chase Edmonds/Leonard Fournette/Tevin Coleman will be good enough to not sink my team this year, especially with Darren Waller and Travis Kelce in a 0.5 TEP format, but I need to prepare for the worst-case scenario.

At this point in the draft, Trevor Lawrence, Justin Fields, Trey Lance, and Zach Wilson had already been taken. Worried about a possible Tom Brady retirement after this year, I pulled the trigger on Kyle Trask. This pick makes sense to me because I foresee my team being competitive as long as Brady continues to play. When he retires, I don’t want to be caught with my pants down with one quarterback in a SuperFlex league. 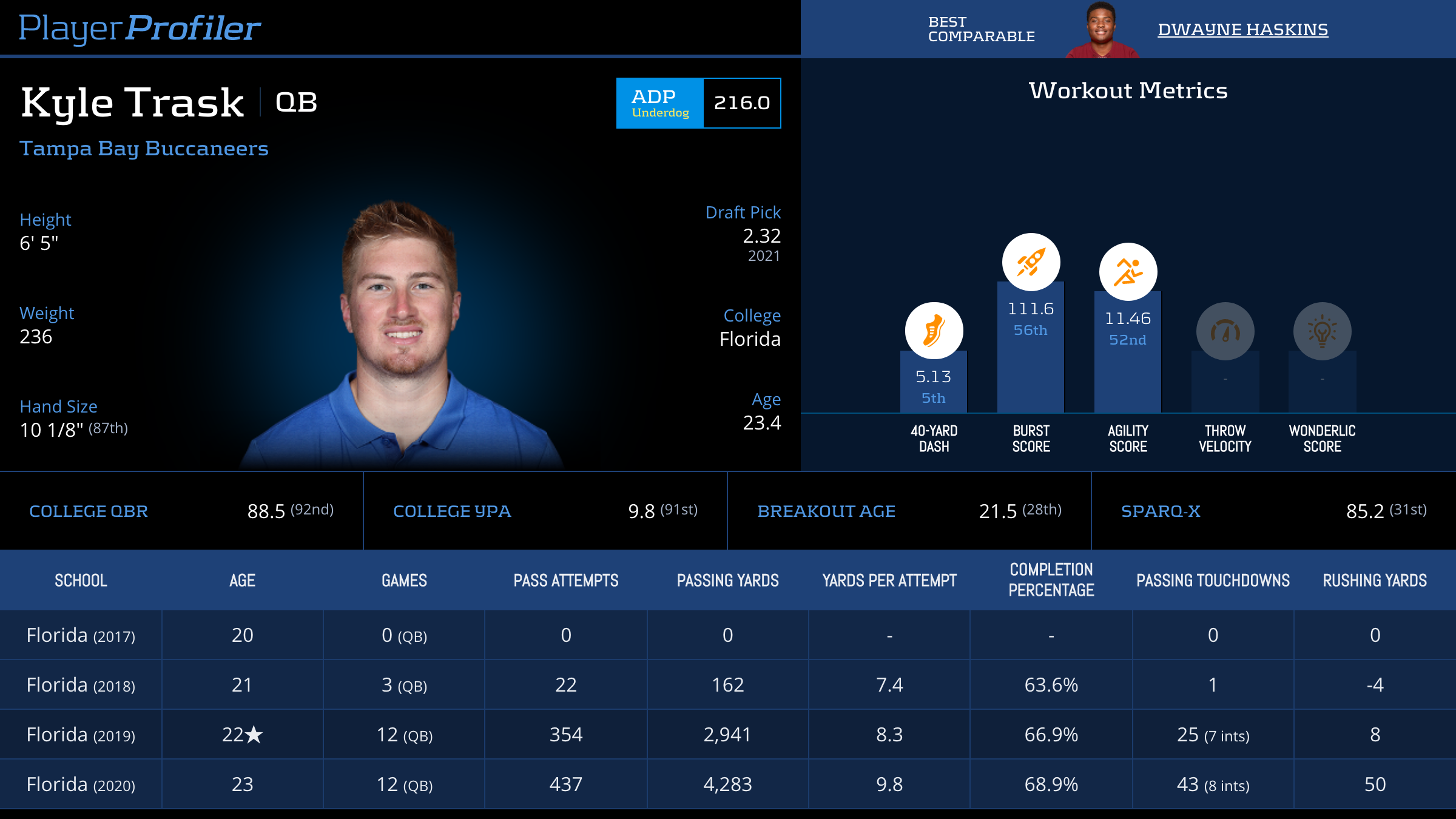 I took Trask over Mac Jones and Kellen Mond for a couple reasons. First, as Brady’s successor, Trask will be able to step into my starting lineup the day that Brady retires. Second, his arm strength, accuracy, and college production are all strong pluses. And with Mike Evans locked up as his first option for several years and a top offensive line, he has a higher floor than Jones and Mond. As long as Trask doesn’t completely bust, he’ll buoy my QB2 spot and do enough for Saquon Barkley, Darren Waller, Travis Kelce, and Davante Adams to win my matchups.

If you’ve spent any time on fantasy football Twitter, you’ve seen the Elijah Moore hype. He is a fantastic route runner, extremely quick, has great hands, put up insane college production, and is being praised more and more by Jets camp every day. In his final year in college, Moore had two drops on 102 targets, and his 86 receptions in eight games broke A.J. Brown‘s single season record at Ole Miss. In addition, he ran a 4.40 second (92nd-percentile among qualified wide receivers) 40-Yard Dash at his pro day, broke out early (19.4 Breakout Age, 82nd-percentile), and has an 85th-percentile College Dominator Rating; the latter two often used to predict breakouts and how “strong” a breakout will be. 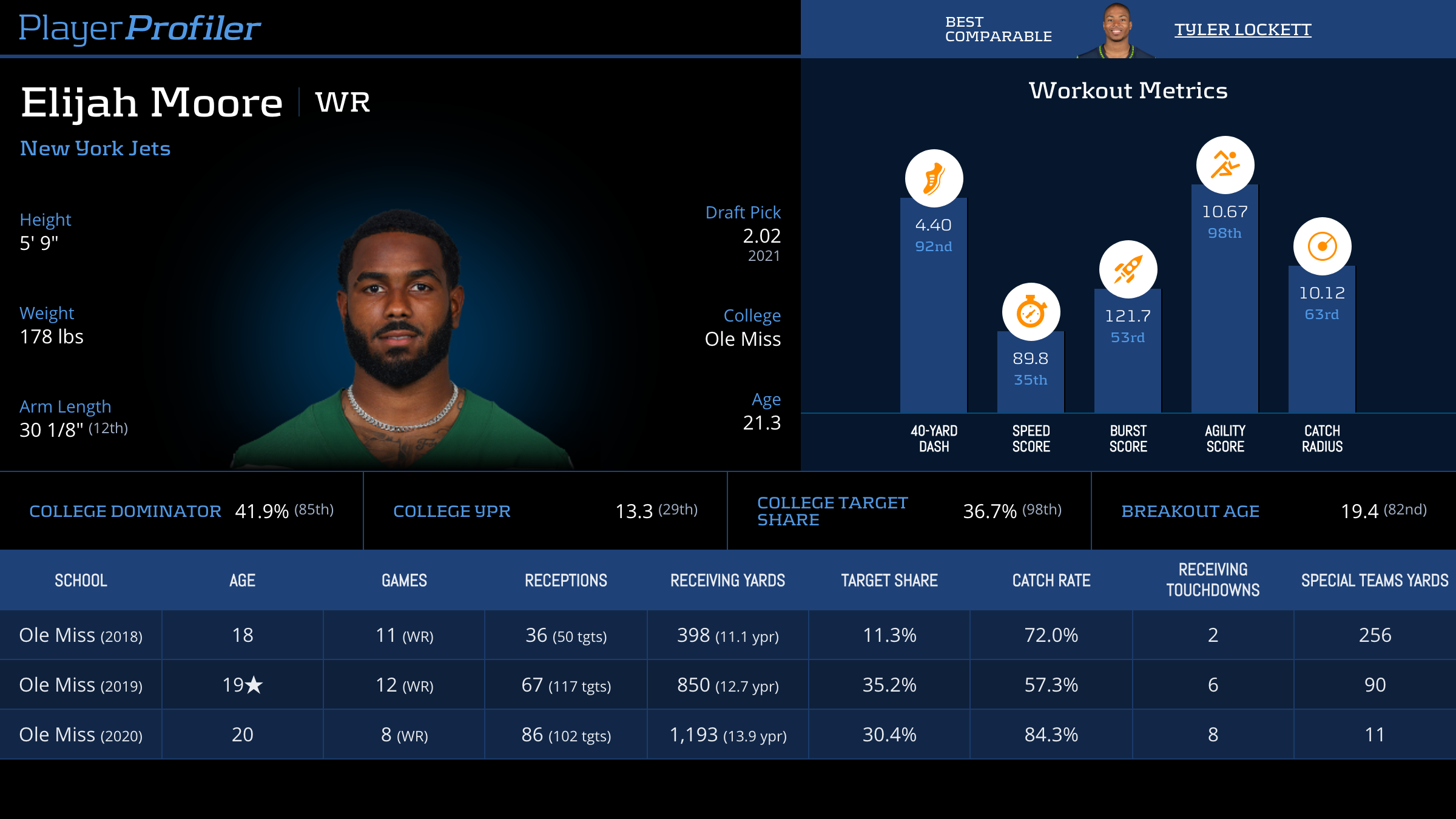 Admittedly, I succumbed to the hype a little bit with this pick. After all, Moore doesn’t exactly have the easiest path with more established players in Corey Davis and Jamison Crowder ahead of him on the depth chart. But with so many scouts, coaches, reporters, and film gurus touting Moore as the next big prospect, I had to stray from my philosophy, even if Rondale Moore and Amon-Ra St. Brown have less talented players to compete with for targets.

At this pick, I was deciding between Tutu Atwell, Elijah Mitchell, Kylin Hill, and Tylan Wallace. I went with Atwell because I see the Rams offense improving with Matthew Stafford. And since Stafford is on my team, I might have a Stafford-Atwell stack in a few years. Recently, research by our own Michael O’Connor and Neel Gupta (which built off of Josh Larky‘s recent research on best ball stacking) has shown the power of stacks in non-best ball formats. To summarize, we want stacks because they take advantage of season-long and week-to-week correlation. Therefore, stacks not only have a higher ceiling than non-stacks, but, even in non-ceiling weeks, they outperform non-stacks. Essentially, (good) stacks are a win-win. 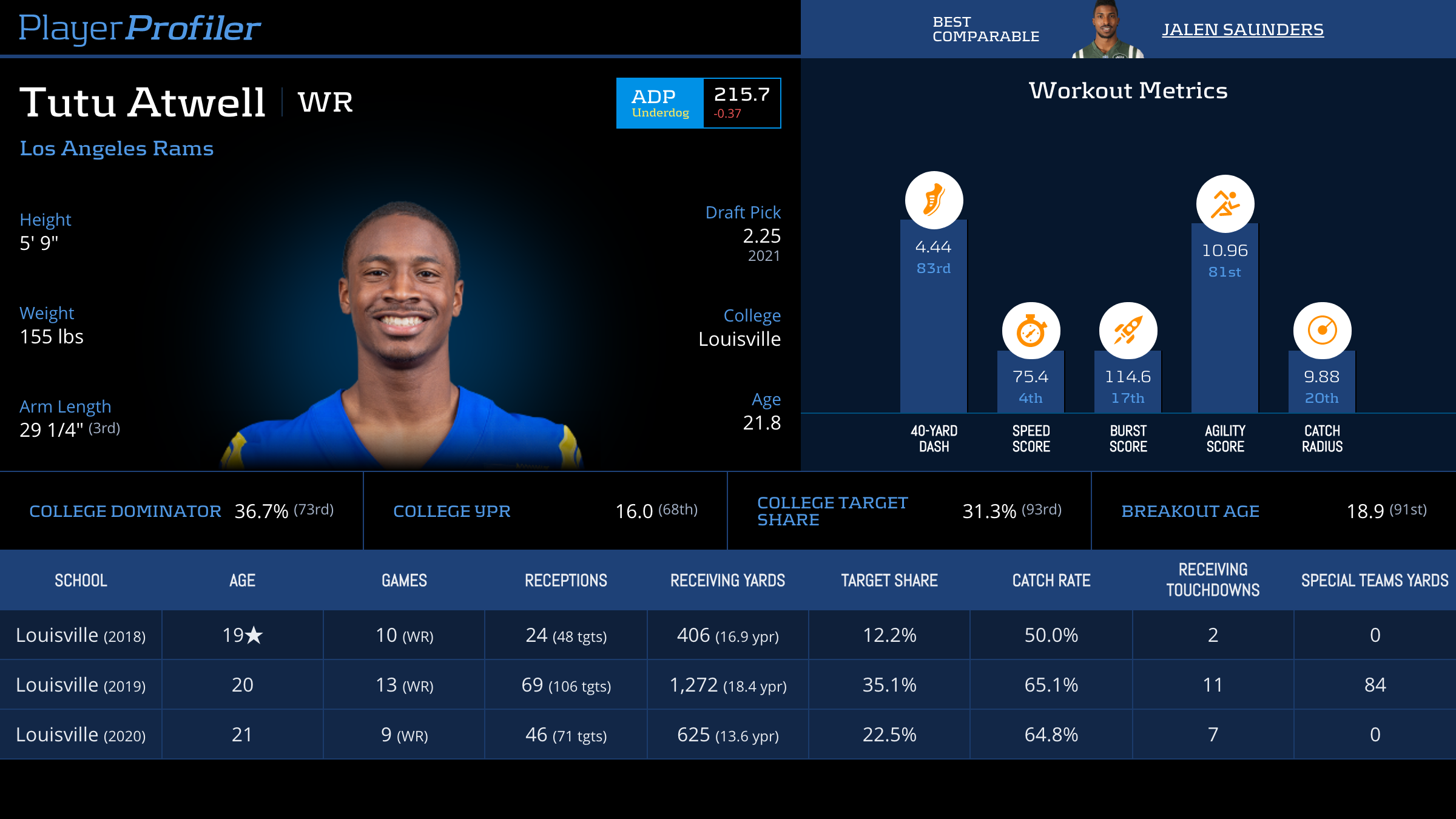 Of course, I’m not expecting the Stafford-Atwell stack to pan out; he’s an undersized receiver, who will probably be used as a gadget player, and is behind Robert Woods and Cooper Kupp on the depth chart. However, he does have promising metrics like a 4.44 (83rd-percentile) 40-Yard Dash, 81st-percentile Agility Score and 18.9 (91st-percentile) Breakout Age. That explosiveness, youth, and (slim) possibility of stacking him with Stafford is enough for me to pull the trigger, especially in the late third round of a rookie draft.

It follows from my strategy coming into the draft that I would take Chris Evans here. Evans is an athletic running back out of Michigan who fills my need for running back depth. He is playing behind only Joe Mixon on the depth chart, and I could’ve taken Jermar Jefferson, but he has D’Andre Swift and Jamaal Williams ahead of him. 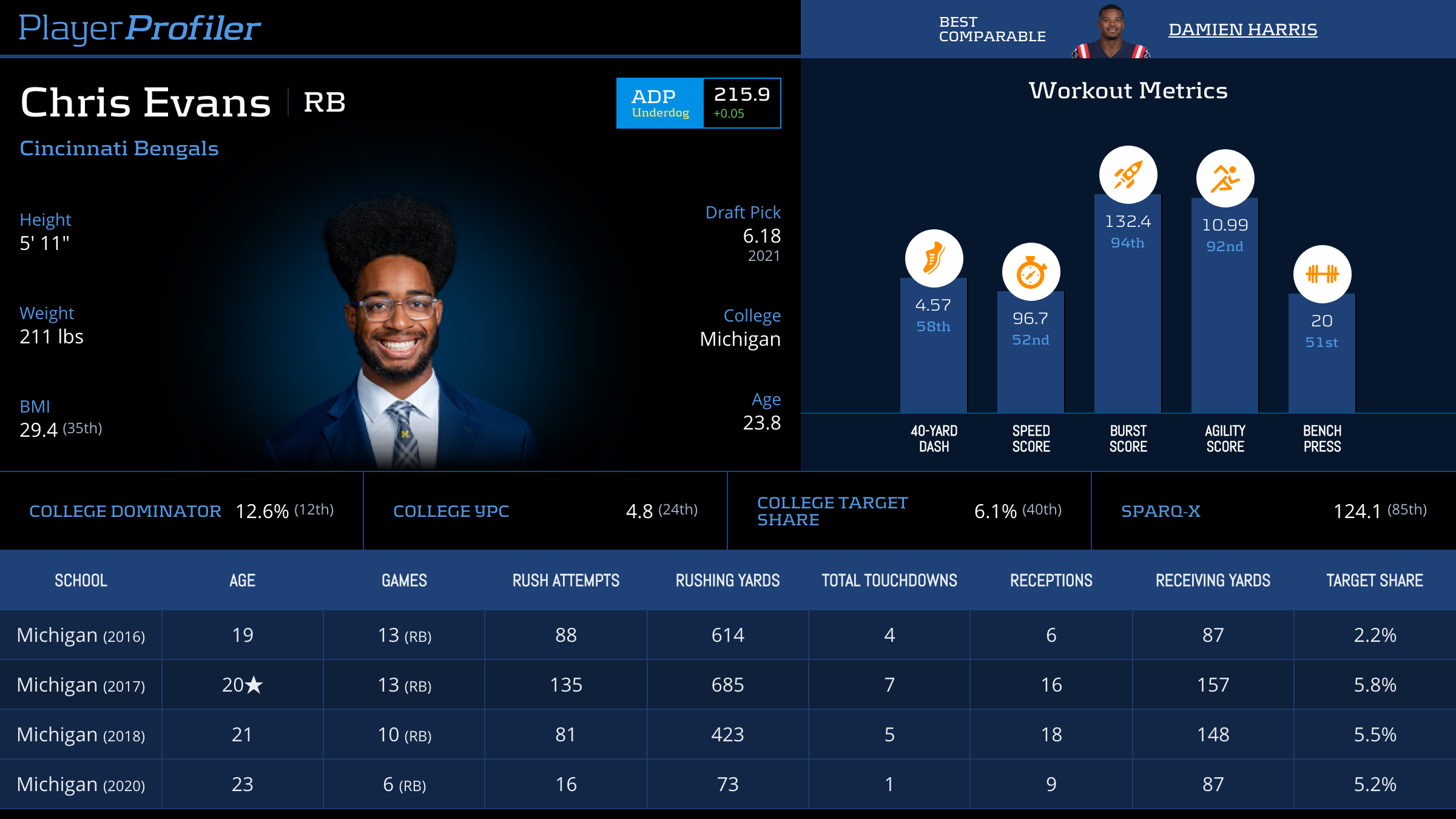 There’s not much to say about prospects at this point in the draft. Evans has a great 132.4 (94th-percentile) Burst Score and 10.99 (92nd-percentile) Agility Score, and he can be used on third downs. He’s also a part of an offense which is trending upwards. At best, I’m hoping he can be a Giovani Bernard-lite over the next few years and provide depth, but players being drafted here are all long shots to ever become relevant.

With the tenth pick of the fifth round, I took Kylen Granson. I was hoping for Noah Gray, Kansas City’s rookie tight end, to fall to me here, but he got picked at the 5.06. 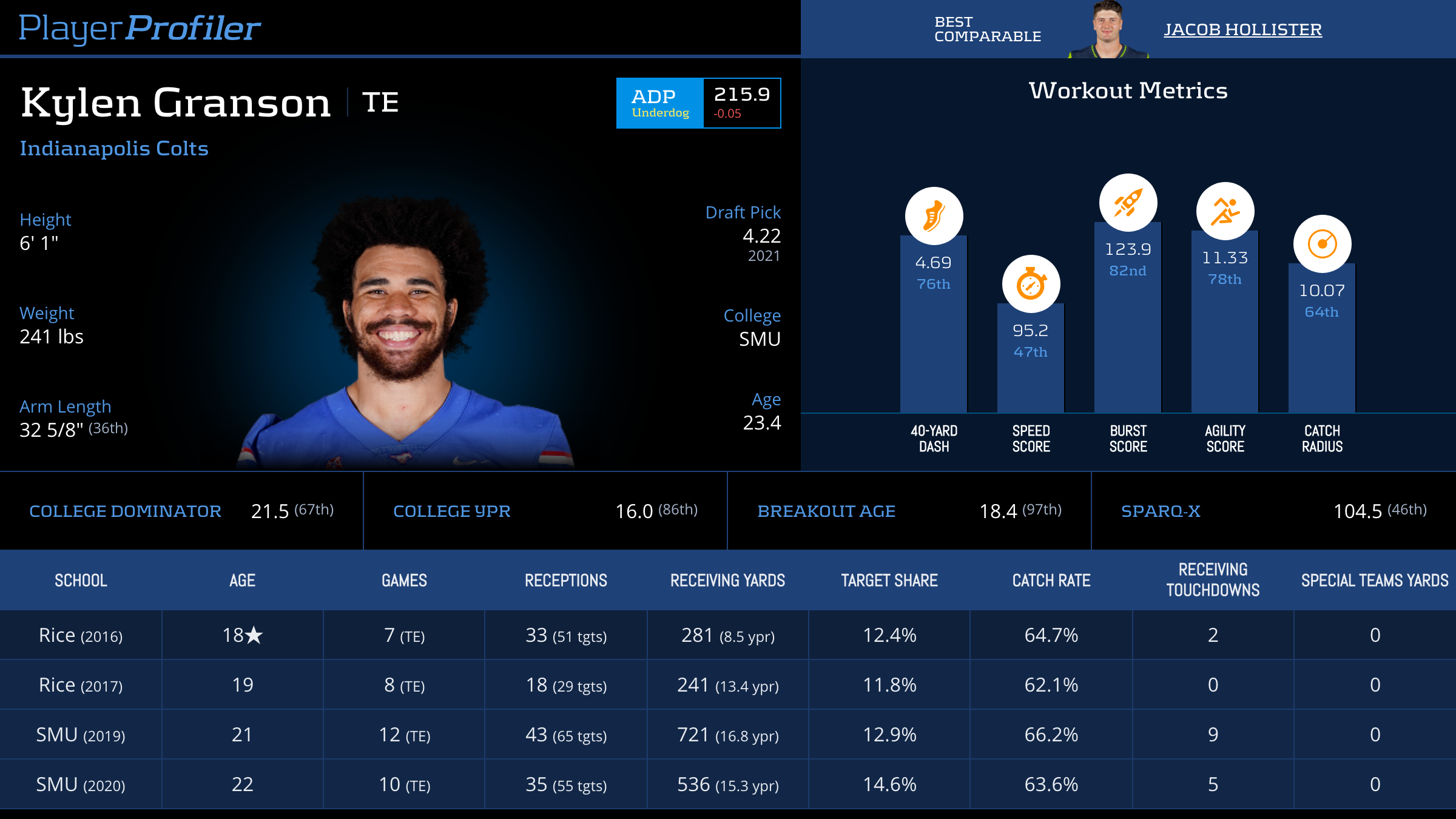 Granson is on the short side for tight end, but he showed decent production at SMU and broke out at 18.4 years old (97th-percentile). He’s also relatively athletic, but I really took him because Kelce is aging and that 97th-percentile Breakout Age was enough to latch onto him. Without an established tight end in Indianapolis, he’s worth a dart throw.