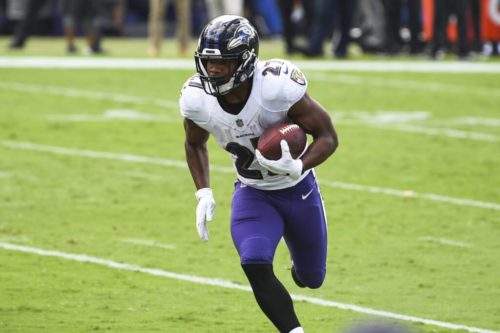 Now past the midway mark of the fantasy football season, 2020 shows no signs of slowing in the injury department. Star running backs are on the sidelines or in question, and the Cowboys dig even deeper into their quarterback depth chart. On the brighter side of things, a handful of players are returning from injured reserve to help boost their respective teams offenses.

As fantasy managers prepare for the home stretch of the fantasy season, and ready for playoff runs, this is no time to take the metaphorical foot off the gas. With injuries and COVID still providing pitfalls in the fantasy landscape, there is no more crucial time than now to secure those wins- and hopefully a future playoff spot. Enough already, let’s hit The Infirmary!

It’s never a good thing to lose a player the caliber of Beckham, but the Browns will survive without him. The star receiver and quarterback Baker Mayfield haven’t produced in the way many expected, and now the Browns will have to rely on some youth at the position. Though Rashard Higgins seems to have chemistry with Mayfield, Khadarel Hodge is the receiver that won the No. 3 job before getting hurt early in the season.

However, another name to pay attention to is Taywan Taylor. Selected by the Titans in the third round of the 2017 NFL draft, Taylor’s player profile drew the attention of fantasy analysts. At 5-11 and 203-pounds, Taylor posted above average marks in the 40-Yard Dash, Speed Score and Burst Score. His 10.78 Agility Score ranks in the 93rd-percentile among qualified wide receivers. Not to mention impressive college production. With Beckham out of the picture, Taylor can throw his hat in the mix, as well.

The Patriots will have to do without Edelman for the foreseeable future, as he breaks his normal routine to head to injured reserve. In San Francisco, the Niners will add Wilson to the list but fellow running back Tevin Coleman will be coming off. With Jerick McKinnon reportedly suffering “tired legs,” Coleman should step into a large role. However, rookie JaMycal Hasty is the one to watch here; he has shown more potential as of recent than McKinnon or Coleman has all year.

Speaking of returns from injured reserve, there is a handful of players, in addition to Coleman, doing just that this week. Rookies Jalen Reagor and Michael Pittman return to their respective squads, both of which are in need of playmakers. Dallas Goedert will join Reagor in returning for the Eagles this week, giving quarterback Carson Wentz the most weapons he’s had available all season.

With Mixon out in Cincy, Giovani Bernard will once again handle lead back duties; Jamaal Williams will step up in Green Bay with Jones sidelined another week. The Cowboys offense was suspect with Dalton under center, and is even more so with Ben DiNucci starting. This might not be the greatest week to trot out those Dallas wide receivers.

Thomas is out for the Saints again and, unfortunately, fantasy managers will also be missing Callaway. With Emmanuel Sanders still on the COVID-19 list, Tre’Quan Smith will be the lead man. It may be time for the Saints to unleash Adam Trautman. The workout metrics are solid, as is his college production, including a 38.1-percent (97th-percentile) College Dominator Rating. Trautman may be just what quarterback Drew Brees needs in these times of turmoil.

No Jeffery and Sanders in Philly means more of Travis Fulgham and Boston Scott. At this point, there is no reason that Fulgham shouldn’t be on EVERY roster; even with the return of Reagor, Fulgham has earned his spot on the depth chart. Samuel out in San Fran is a shame, especially with the 49ers offense starting to roll. However, this just provides ample opportunity for Brandon Aiyuk to make his mark on the team.

The biggest news here is Ingram. Should the veteran back sit out this week, Gus Edwards and rookie J.K. Dobbins will likely share the workload.

Though Edwards has been good when given the opportunity, it is Dobbins’ time to shine. The future lead back of the Ravens will get his first chance to be the man in the Baltimore backfield, and will do wonders with it.

Cook has had an up and down week, injury-wise, but he will be good to suit up for the Vikings come Sunday. The running back situation in Seattle isn’t quite as clear. Both Carson and Homer are game time decisions, leaving the possibility that rookie DeeJay Dallas will lead the team at the position. At 5-10 and 217-pounds, Dallas doesn’t quite have the speed that one would hope; but he is a productive runner and fits nicely in the Seattle scheme.

With Gore banged up in New York, Lamical Perine should continue to see increased reps, regardless if the vet plays or not. Gerald Everett becomes the main tight end for Jared Goff should Higbee miss. However, Miami’s defense is second against the position this year. Jerry Jeudy might suddenly find himself the No. 1 wideout for quarterback Drew Lock should Patrick miss Sunday’s game. In what could be a high scoring affair against the Chargers, Jeudy will see a strong share of targets this week.