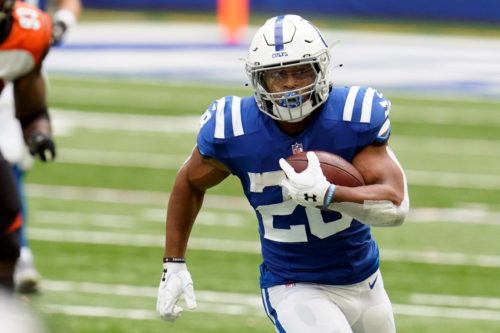 We’re approaching the mid-point of a wild NFL season in a wild year. Playoff teams angle for position while rebuilders look to take inventory of their assets. Justin Herbert continues to scorch the Earth. We had another rookie pop up this week in what’s becoming weekly tradition. And the panic button lid has been lifted on another first year player. Let’s take a look at all the week’s action through PlayerProfiler’s advanced stats, metrics, and analytics.

The season-long over-under for Todd Gurley was 9.5 rushing touchdowns. Through eight games, he has eight. For all the chatter about his knees, he’s still one of the best touchdown-scorers in the NFL. When the Falcons get in close, he is rarely taken off the field. He’s actually top-5 among qualified running backs with four Breakaway Runs, so the Gurley faders have to pump the brakes at least a little. 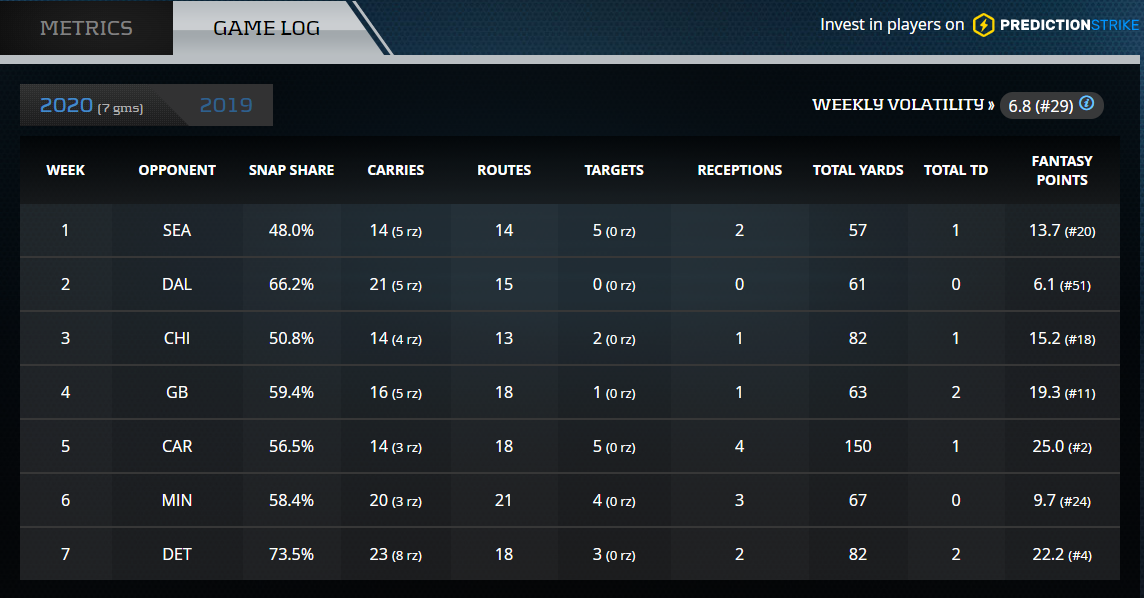 Brian Hill still siphons off some work between the 20s (Hill had 11 carries on Thursday to Gurley’s 18). And he usually looks effective! But even with new coaching, the team still realizes Gurley is a great bet in the red zone, where he’s received 33 touches, second-most in the league. He actually led the league in touchdowns before Sunday’s action, and he looks to be an absolute lock for 10-plus scores on the ground this year, a great return for his third-round ADP.

Action: The Falcons take on the Broncos next week, who have allowed 73 points over their last two games. Gurley’s 17.4 attempts per game and 2.9 targets per game give him plenty of chances to return value in another game where the Atlanta defense will be allergic to doing any defending.

Lesson Two: We Need To Talk About Jonathan Taylor

Listen. I don’t like it either. But Jonathan Taylor has been straight Trent Richardson-ing it out there. He’s been outplayed by Nyheim Hines and Jordan Wilkins at various times throughout the year, even behind an offensive line comparable to what the rookie played behind at Wisconsin. It’s simply not coming together when many thought the Colts’ post-bye game against Detroit would be the coming-out party so many other rookies have enjoyed this year.

Taylor saw 11 carries and turned them into 22 yards. Wilkins, however, carried the ball 20 times for 89 yards and a score. Wilkins was explosive and shifty, while Taylor was anything but. He simply can’t get in gear against NFL talent yet. It’s more trouble that Hines is such an effective receiver for Philip Rivers‘ game. It’s getting harder and harder to project Taylor to take over the backfield when he’s getting cannibalized so violently.

Action: The dynasty buy-low window is still wide open. Taylor’s continuing struggles offer a chance to get him off frustrated investors’ rosters, and a price dip like this will hopefully never be around again for the lauded rookie. He has to get into gear eventually.

Lesson Three: We Also Need To Talk About J.K. Dobbins

J.K. Dobbins turned 15 carries into 113 scoreless yards in Week 8. The rookie was patient and exhibited great vision against a sturdy Pittsburgh front, once again showing great efficiency on the work he was given. That’s been a theme of Dobbins’ play all year, no matter how limited his role. He’s top 5 in True Yards per Carry, Breakaway Runs, and Yards per Touch. This is an RBBC team, but Dobbins is clearly the best running back on the roster.

The Ravens had 47 rushes, which bodes well for Dobbins’ outlook while Mark Ingram recovers from an ankle sprain. Sure, Lamar Jackson and Gus Edwards will continue to receive plenty of work, but Dobbins has proven himself as the most effective runner on a per-rush basis throughout the early parts of the season.

Action: Dobbins and Edwards will be RB3-ish values against the Colts next week. The run-heavy gameplan won’t be altered, especially against one of the league’s premier defenses. The Ravens will stick to what they know, leaving Dobbins as an attractive GPP play for the second week in a row.

DeeJay Dallas drew the start in Week 8 with the Hawks’ other running backs all ailing, and he responded with 58 yards and two scores. It wasn’t a blow-up spot in the rookie’s first heavy dose of action, but the fact that he didn’t completely faceplant bodes well. Dallas’ pass game usage was encouraging, as a player who was worked in more as a receiver each year in college. 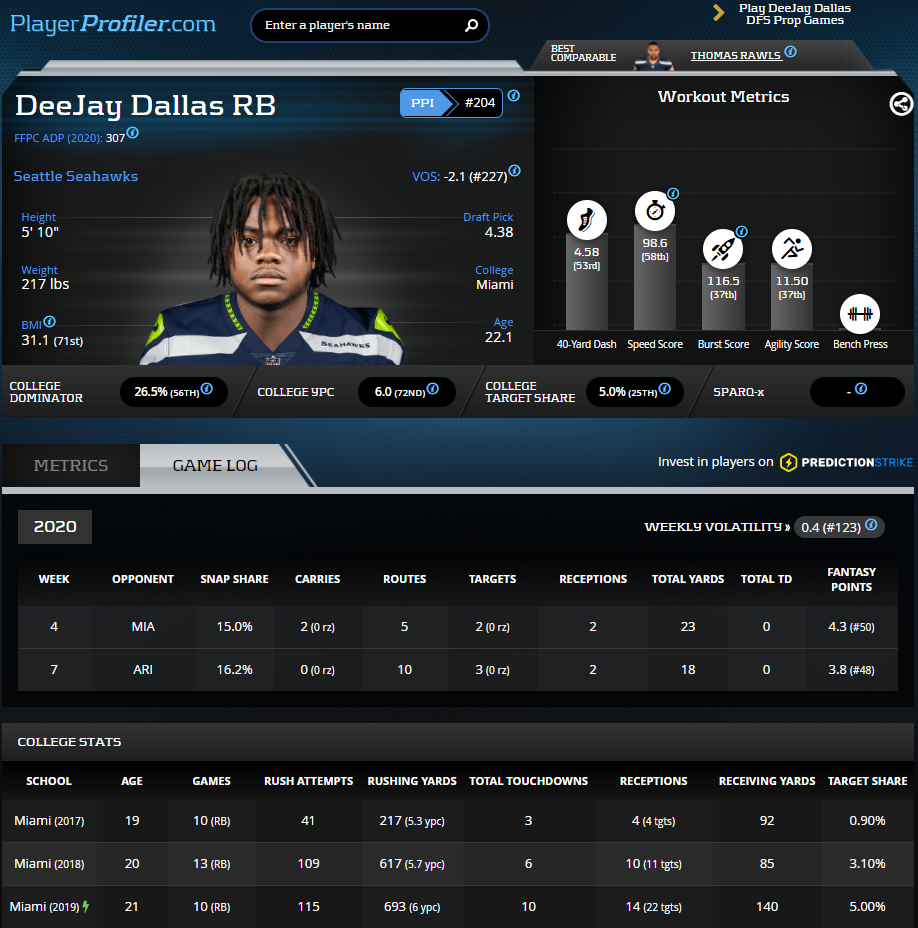 The former Hurricane’s first NFL TD came on a Russell Wilson bootleg where Dallas went relatively untouched for a two-yard score. His second was a short run up the middle late in the fourth quarter. His multi-purpose skillset is a plus for a player on such a prolific offense.

Action: The Seahawks’ running back options will be in flux this week, so injury news will be key. Seattle faces Buffalo next week, and Dallas could be in line for another start or third down-back usage at the very least. He’ll be a DFS free square if the former is true. Keep him in mind as four teams are on bye next week.

The Ryan Fitzpatrick hangover hit hard in Tua Tagovailoa‘s first NFL start. He was strip-sacked by Aaron Donald on his first career snap, but battled back to accumulate 93 yards as the defense and special teams terrorized Jared Goff all day long.

Tagovailoa targeted nine players, with none catching more than three balls. It’s a far cry from the Fitzmagic we’re used to. Tua doesn’t give the team any more chance to win than the veteran, but they’ve got to see what their investment looks like at some point. He’s still a project at this point in time and should stay on dynasty taxi squads until we see signs of life.

Action: The Dolphins face the surging Cardinals in Week 9. Tagovailoa will have to do more heavy lifting if Kyler Murray and company keep the offensive success up. The Miami defense has been a pleasant surprise, but the Cards bring a very different challenge than the Rams. Tua will be a worthwhile galaxy brain bomb in GPPs with DeVante Parker.