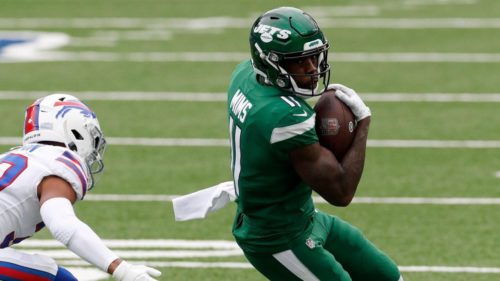 Maximizing your fantasy points per salary dollar is the key to cashing in DFS. If you want to afford the best cash plays on the slate, dumpster diving for underpriced value plays is the way to go. Backup players seeing expanded workloads are always the best values, and this slate offers plenty. Here are the best DFS Flex values for Week 8 based on PlayerProfiler’s advanced stats, metrics, and analytics.

Giovani Bernard smashed in Week 7 without Joe Mixon, posting 96 total yards and finding the end zone against a stingy Browns defense. While he saw a season-high 13 carries, he got there with his skills as a pass-catcher, hauling in all five of his targets for 59 yards and a score. That allowed Gio to smash his cheap salaries on DK and FD, but this week he is priced more appropriately on both sites relative to his role.

Without Mixon, the Bengals increased Joe Burrow’s pass attempts from his 41.9 per game average to 47 last week. That was the most he had since Week 2, and they’ll likely play that way again this week. The Titans have been insanely efficient on offense, forcing opponents into negative Game Script and increased pass attempts. The Bengals were already averaging a top-12 Pace of Play with 2.28 plays per minute, so we can expect plenty of attempts for Burrow. Bernard will be on the field for every one of those passing downs, so we can expect him to return value even on his increased price.

While Deebo Samuel was taking handoffs and running shovel passes, Brandon Aiyuk was quietly operating as the WR1 for San Francisco over the last five weeks. Samuel was seeing a solid 16.5-percent (No. 51 among qualified wide receivers) Target Share, but his 2.8 (No. 105) Average Target Distance mark boosted his PPR value while Aiyuk was seeing downfield targets (55.7 Air Yards per game). Now that Samuel has been ruled out, we can expect the 49ers to blend those two roles together for their first-round rookie WR.

deebo samuel and brandon aiyuk were similar prospects coming into the nfl and their box scores looked similar.

…until you look at the air yards.

The 49ers and Seahawks have the highest total on the slate at 53.5 points. The Seahawks are also a signature pass-funnel defense, ranking top 10 against the run but No. 30 in Defensive Passing DVOA. They should be able to stymie the 49ers rushing attack, meaning Jimmy Garoppolo will be airing it out against this non-existent pass rush and banged-up secondary. That means Aiyuk will operate as the WR1 in the best game environment and matchup on the slate. His price may seem a little high on DK, but he’s severely underpriced on FD. If he picks up some of the PPR-friendly “tap” passes that Samuel was dominating, he’ll be a smash on both sites.

With Odell Beckham going down with a torn ACL, Rashard Higgins saw a season-high 86.3-percent Snap Share and hauled in all six of his targets for 110 yards. On Wednesday, he also told reporters that he’s in the starting lineup, so this elevated role will continue this week against the Raiders.

Higgins’ new role couldn’t have come at a better time. Las Vegas ranks No. 29 in Defensive Passing and Rushing DVOA, meaning the Browns are in their best matchup of the season. Jarvis Landry has also been banged up for weeks now dealing with hip and rib injuries. He hasn’t caught more than five balls in a game and has only two over 50 yards. Higgins will essentially be operating as the WR1 in this matchup with rookie Donovan Peoples-Jones as the third option.

Just throwing it out there, folks.

With no workout metric over the 21st-percentile, Higgins doesn’t have access to a massive ceiling like his athletic rookie counterpart, but he does have a history of hogging targets with his 43.6-percent (88th-percentile) College Dominator Rating and his 29.3-percent (82nd-percentile) College Target Share. Expect him to hog targets on the field this Sunday, making him a smash play in DK’s full PPR scoring.

In his first career game, Denzel Mims played 97.8-percent of the snaps and saw a 31.8-percent Target Share. He also played out of the slot on 27.3-percent of his snaps and saw two red zone targets. This is incredible usage for a rookie receiver, with the only downside being the team he plays for.

The Chiefs are solid against the pass, ranking No. 5 in Defensive Passing DVOA. The Jets are also massive 19.5-point underdogs, which is actually good for their receivers. They should get down big in the first half and get to operate in garbage time for much of the contest. Mims will command the lion’s share of those looks without Jamison Crowder sponging up targets in the slot. He also has massive upside given his athletic profile, and you can’t beat that at near-minimum pricing.

We have access to Travis Kelce, George Kittle, and Darren Waller on the main slate, but RB pricing will make it difficult to pay up for them in most lineups. This increases the viability of a punt play at TE given the position’s volatility and dependence on touchdowns. If you’re looking for a cheap guy, Harrison Bryant fits the bill. Austin Hooper is still out following his appendectomy, meaning Bryant and David Njoku will continue to play increased snaps.

Bryant played well ahead of his veteran counterpart last week, playing more snaps, running more routes, and seeing more targets. He also did more with those targets, turning his five looks into four receptions, 56 yards and two touchdowns. That was obviously best-case-scenario, meaning we can’t expect the rookie to run that good again. The Browns clearly favor Bryant over Njoku, and the loss of Odell Beckham frees up nearly seven targets per game. We may not get two scores again, but he can still hit value and let you pay up for the elite RBs that swing the slates.