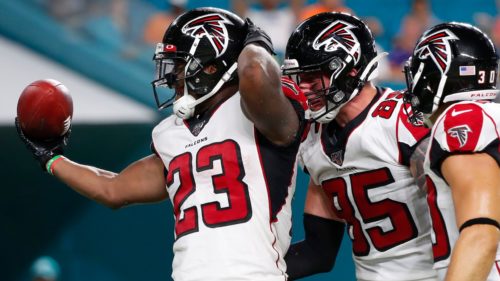 Holy Hell. Week 12 is shaping up to be something else. It all began on Monday, with the news of a COVID outbreak in the Baltimore Ravens’ facility. Fast forward to Saturday night, and several players across the league (many of fantasy relevance) had been added to the COVID list throughout the week. Including the entire Broncos quarterback room. Yikes.

For the fantasy football community, this is perhaps the toughest week to maneuver thus far this season. It’s almost becoming a matter of just “hanging on” as the regular season comes to a close. With the fantasy playoffs fast approaching, the hope is that the NFL can “hang on” and finish the season without too much adversity. Per usual, The Infirmary has all the injury news covered. For obvious reasons, the COVID List is the first stop.

Eeesh. There’s quite a few big names on this list. Baltimore’s losses nearly assure a beatdown at the hands of the Steelers. Makes it hard to trust anyone on the offense, especially with Robert Griffin III under center. That being said, perhaps Justice Hill can take advantage of the opportunity to make his mark in the Ravens backfield. In case you’ve forgotten about him…

With the legend Fitzgerald sitting out, Christian Kirk becomes an enticing DFS and/or Flex play. The same can be said for Deebo Samuel, who leads a beaten wide receiver core. For the Colts, no Taylor is a bump up for Nyheim Hines. Conner’s absence for Pittsburgh has many looking to Benny Snell. However, rookie Anthony McFarland is in line to see increased touches this week. Expect him to make the most out of them.

The Broncos have plenty of problems, but one is a real headache; all of their quarterbacks will miss Sunday due to Jeff Driskell’s positive COVID test. Undrafted wide receiver Kendall Hinton will start for Denver; the rookie played quarterback at Wake Forest before his eventual switch to wideout. Poor guy has little time to prepare for the dangerous New Orleans defense. Things could get ugly in the Mile High City.

The Cobb injury opens the door, once again, for Keke Coutee to make a splash. It’s much more likely quarterback Deshaun Watson rides Will Fuller and Brandin Cooks the rest of the way. The Jets will rely on Frank Gore, Josh Adams and Ty Johnson with Perine sidelined. Yeah, it’s pretty gross. Brown’s injury looks bad for Buffalo, as the offense struggled when Brown missed time earlier in the season. However, rookie Gabriel Davis has been impressive, and is starting in place of the veteran.

The biggest news, of course, is Burrow. It’s always a shame to see a player get hurt, but season enders are the worst. As a fan, there’s nothing like seeing a promising young player go down with a severe injury, a la Teddy Bridgewater. And if the ACL wasn’t enough, it appears it is also the MCL, along with other structural damage. The rook has a long road to recovery ahead of him.

Teddy Bridgewater’s return to Minnesota will be a little tougher without McCaffrey; but Mike Davis will fill in admirably, once again. The Vikings also find themselves down weapons. In addition to Adam Thielen hitting the COVID list, Smith will be out of the lineup. While rookie Justin Jefferson is sure to draw plenty of targets, veteran Kyle Rudolph is an excellent play this week; the Panthers rank No. 21 against opposing tight ends.

Chark and Conley missing Sunday’s game isn’t exactly ideal for quarterback Mike Glennon, who is starting his first game of the year. Laviska Shenault is set to return, however. Perhaps the biggest news of this list, is Mr. Gurley. While he isn’t the same running back these days, he’s been solid for fantasy purposes. Brian Hill will assume lead duties in Gurley’s stead, and there’s plenty of reason to believe in him this week.

Coleman may be out in San Francisco, but Raheem Mostert was activated from the injured reserve, as was Jeff Wilson. There’s a good chance the pair hits the field this Sunday for the 49ers; Mostert would be a welcome sight for this offense. Matt Breida looks to be the starter against the Jets with Ahmed out and Myles Gaskin a week away from returning. Throw him in those DFS lineups.

Even if Foles hadn’t been injured before Chicago’s bye week, a change was likely coming regardless. Nothing to get excited about with Mitchell Trubisky, however. The Miami situation, on the other hand, is more interesting. Should Tua sit, Ryan Fitzpatrick will slide in nicely, and take great joy in pummeling his former team in the New York Jets.

Oh, Julio. One of the best to ever play, yet always a concern for missing time. The Atlanta offense isn’t the same without the star wideout, so for the sake of all involved, let’s hope he makes it on the field. Aside from Jones, those with the questionable tag aren’t overly fantasy relevant. Sure, if MVS sits then Allen Lazard becomes interesting. And Gerald Everett is a definite fire if Higbee sits. The overall sentiment remains, however; nothing much to see here, move along.

Week 12 of the NFL season has presented plenty of obstacles for fantasy managers. The Tuesday matchup of Baltimore and Pittsburgh has already provided enough headaches on it’s own. Still, this late into the season, the injuries and COVID designations give rise to opportunity; and from that opportunity arises fresh fantasy producers. It’s never too late to bolster a roster for a playoff run. And in 2020, teams need all the depth they can get.