It was a brutal Sunday of football to begin with, with Jarvis Landry and Collin Johnson pacing the receiving chart. Luckily, Derrick Henry, Tyreek Hill, and other fantasy studs got the scoring going and both delivered statement wins for their teams. Let’s sift through the vital takeaways from the weekend action through PlayerProfiler.com’s advanced stats, metrics, and analytics.

Deshaun Watson has toiled away the beginning of his career under Bill O’Brien. The light at the end of the tunnel is getting brighter with Watson continuing to roll without him. He needed only 17 completions on Thanksgiving to toss four touchdowns against the hopeless Lions. He also hasn’t thrown a pick since Week 5 against the Jaguars. 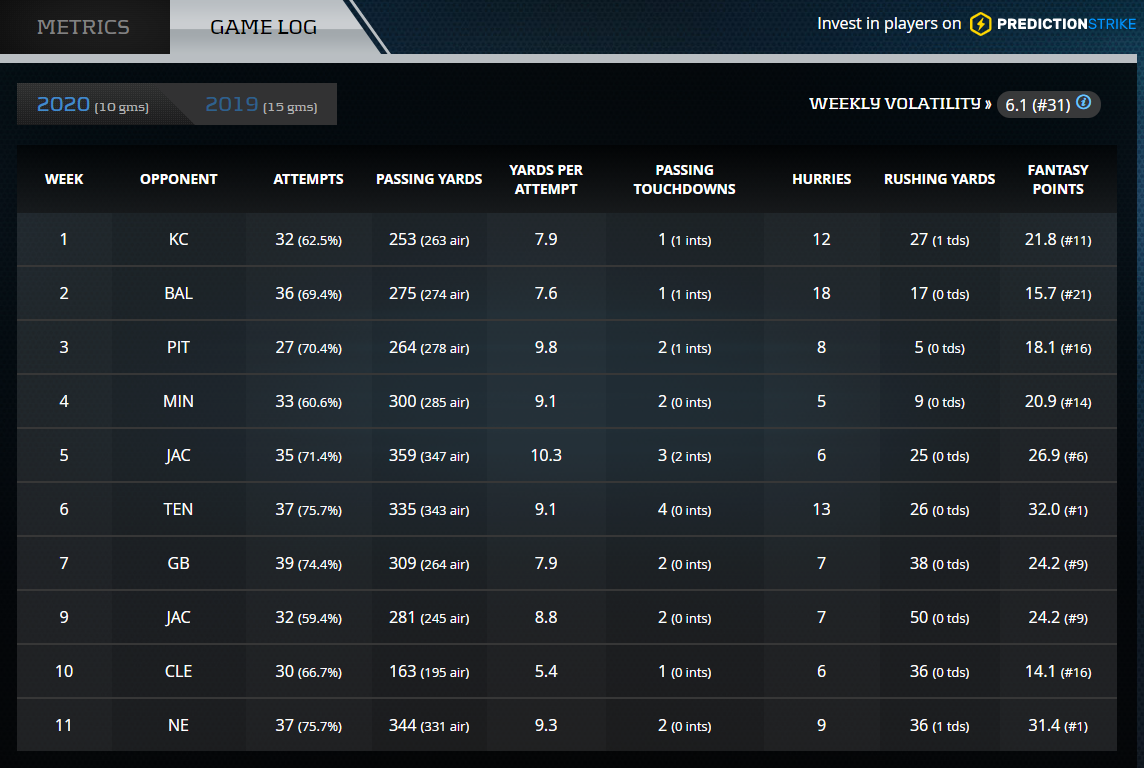 Watson has been making sweet music with Will Fuller and Brandin Cooks all year long, and with Kenny Stills now released, their Target Shares will only increase. Fuller caught 6-of-7 on Thursday for 171 yards and two scores. A once inconsistent deep threat, he’s been a do-it-all player for Houston and has stayed healthy for a majority of the year.

Action: Watson is on fire and now draws a Colts defense that’s fresh off being demoralized by the Titans. More on their woes later, but Watson makes for an interesting GPP option with no running back like Derrick Henry with which to attack the Colts.

Derrick Henry took advantage of a depleted Indy front to the tune of 178 yards and a trio of rushing scores. The absence of DeForest Buckner and Bobby Okereke was felt as Henry steamrolled in the first half, doing all but 48 yards of his damage before halftime.

Derrick Henry has piled up 1,121 rushing yards in his last 8 road games

Since the 1970 merger, only hall of famers Eric Dickerson & Earl Campbell had more rush yards in an 8-game span of road contests pic.twitter.com/bTht7Mec8B

It was the third straight 100-plus yard game for the big dog, and his seventh of the season. The Titans have gotten away from their pass-happy ways, with Ryan Tannehill only eclipsing 20 pass attempts once since Week 6 after surpassing that mark in four of five games to open the season. It’s De-Hember.

Action: Henry remains arguably the highest-ceiling running back in fantasy, and all while contributing next to nothing in the passing game. He’s an elite play next week against the Cleveland Browns, who were just rocked by UDFA James Robinson for 128 yards and a score.

Austin Ekeler finally returned to fantasy lineups this week after an eight-week hiatus and had career-high usage with 30 touches. It was the opposite of a limited snap count for the all-purpose back, who finished with 14 carries for 44 yards and a whopping 16 targets, catching 11 for 85 yards.

Ekeler’s return dinged Keenan Allen‘s monstrous Target Share, “down” to 19-percent after averaging 30.4-percent thus far. This may have been an anomaly with the Buffalo defense pressuring Justin Herbert constantly, but we still should note it. Having both of these receivers back should make for an even better offense overall.

Action: Herbert and company face New England next week, hopefully a bounce back spot for a prolific offense up to this point. The Pats were all over Kyler Murray and the Cardinals on Sunday, but Herbert will have plenty of avenues to get there even if Stephon Gilmore shadows Allen.

Kirk Cousins continued his hot streak with another three touchdowns on Sunday, including one clutch toss to Chad Beebe in the final seconds to complete the comeback. It was his highest volume passing day of the season, and he was impressive with a 75-percent completion percentage and his 8th, 9th, and 10th touchdown passes in the last four weeks.

Justin Jefferson filled in seamlessly as the Vikings’ top receiver with Adam Thielen on the COVID list. He saw a season-high 13 targets, collecting seven for 70 yards and two scores. Olabisi Johnson actually led the team in receiving with 74 yards, but Jefferson will be a great play again next week whether or not Thielen is able to return against Jacksonville.

Action: The Vikings draw the Jags next week, an all-systems-go offensive matchup, and going back to Dalvin Cook after a down week where he was nicked up by injury will be a way to capture elite upside at likely reduced ownership and salary.

Tyreek Hill caught 13-of-15 targets for 259 yards and three touchdowns on Sunday. It was a career day for the speed demon, eviscerating the Bucs secondary for 203 yards in the first quarter alone. The damage was done on two Patrick Mahomes touchdown bombs of 75 and 44 yards.

Tyreek Hill accounted for over half of Patrick Mahomes air yards (50.7%), with the duo gaining most of their production downfield.

Hill has 582 receiving yards and eight scores over the last month, a trend that’s arrived with his garnering more volume over the course of the season. Mahomes is feeding his most dangerous weapon as much as possible, and it seems to be working. Their connection is the best in football outside of maybe Aaron Rodgers and Davante Adams, and even that is a stretch.

Action: The Chiefs draw the hopeless Broncos on SNF next week. While the Chiefs will be off the main slate, eating Hill chalk at captain in showdown might be the play. Enjoy the fireworks.