This is an article about Week 1 studs who had been rising on my draft boards for weeks, if not months, and whose Week 1 performances solidified my belief in them. On Twitter, Reddit and Sleeper, I’ve observed a stigma surrounding overreacting to Week 1. Call this list an overreaction if you want, but these are players who I’ve thought through over and over, and am willing to plant my flag on. I’ll offer you my opinions on the path I saw for each of these players coming into the season, how Week 1 reinforced those beliefs, where I predict they will finish, and “better” players that I would take them over.

I liked Corey Davis coming into this season because despite the narrative that he was a bust, especially for a fourth overall draft pick, he had shown flashes of brilliance and had a mini, post-hype breakout last year. I’ve always believed in his talent since he had an 18.7 (95th-percentile among qualified wide receivers) Breakout Age and 51.6-percent (96th-percentile) College Dominator Rating, which are major indicators of success in the NFL. Finally, in 2020, Davis put it together and was on track for 105 targets. He had five games with more than 100 yards, including a 182-yard game, all as the second option on his team. When the Jets signed him to a sizable contract this offseason where he would get his chance to be a number one receiver, I was all in. 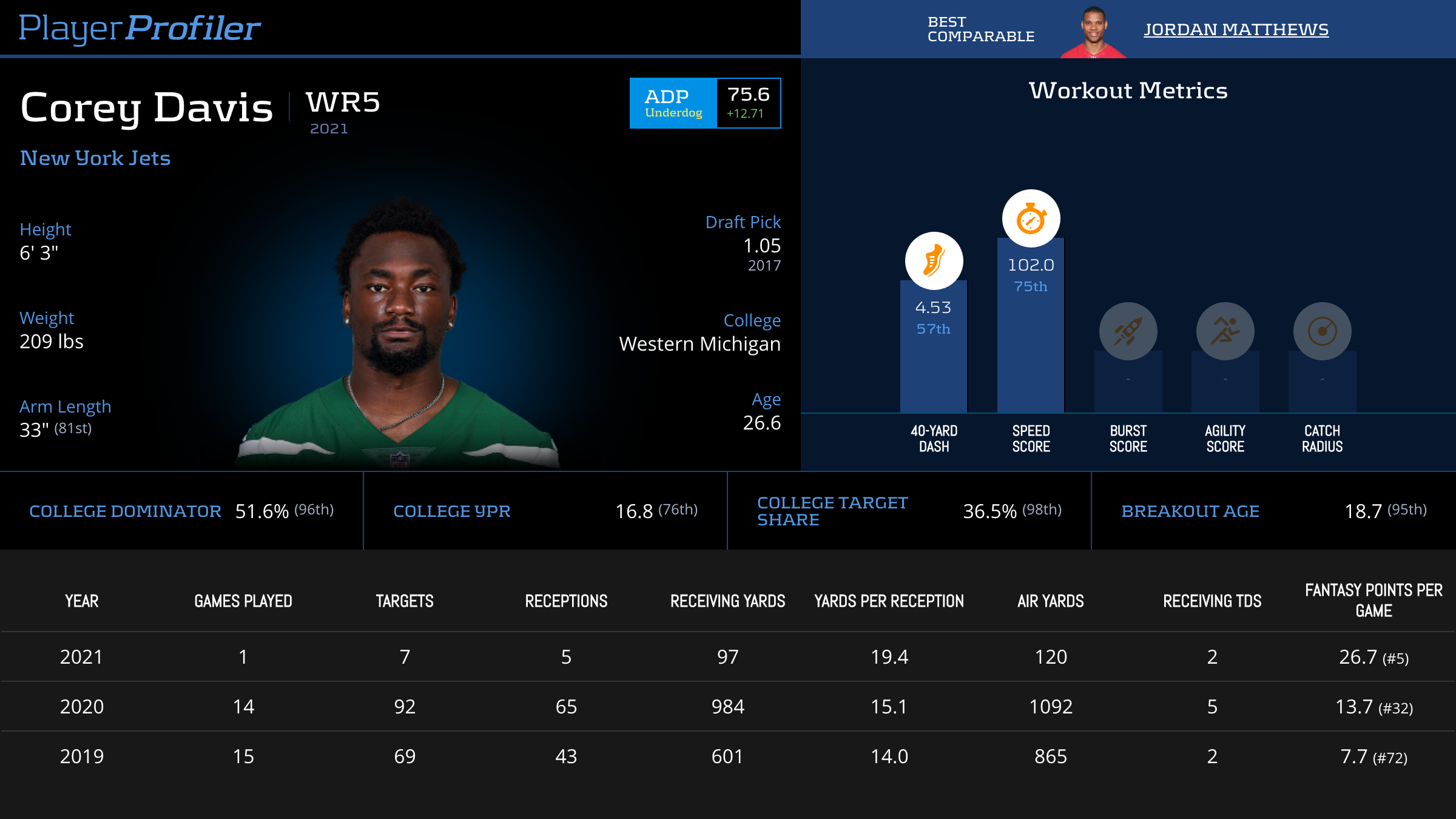 In Week 1, Davis led the team in targets, providing more evidence he’s the first option, and his 244.1-percent (No. 3) Target Premium shows he was also far better than his teammates with those targets. Braxton Berrios, who matched Davis in targets, had almost half as deep of targets as Davis and isn’t really a threat to his workload. Likewise, Denzel Mims cannot supplant him either. The only possible competition is Elijah Moore, but until he actually does something on the field, he isn’t a threat.

I predict Davis will finish in the top 10-15 amongst wide receivers this year. If this seems unbelievable, Robert Woods is an example of what Davis can be. Both showed flashes in bad situations before changing teams with a young QB where they were the top option.

I would rather have Davis than many players ranked above him, including Diontae Johnson, Chris Godwin, and Terry McLaurin.

I wish I wrote a whole article in the offseason about why I loved D.J. Chark coming into 2021. I believed in him so much that in my main dynasty league, I traded Tyler Lockett for Chark and John Brown. I never quite understood why people were fading him for Laviska Shenault when Chark had more targets and yards in 2020, is a better athlete, and had a better rookie season. 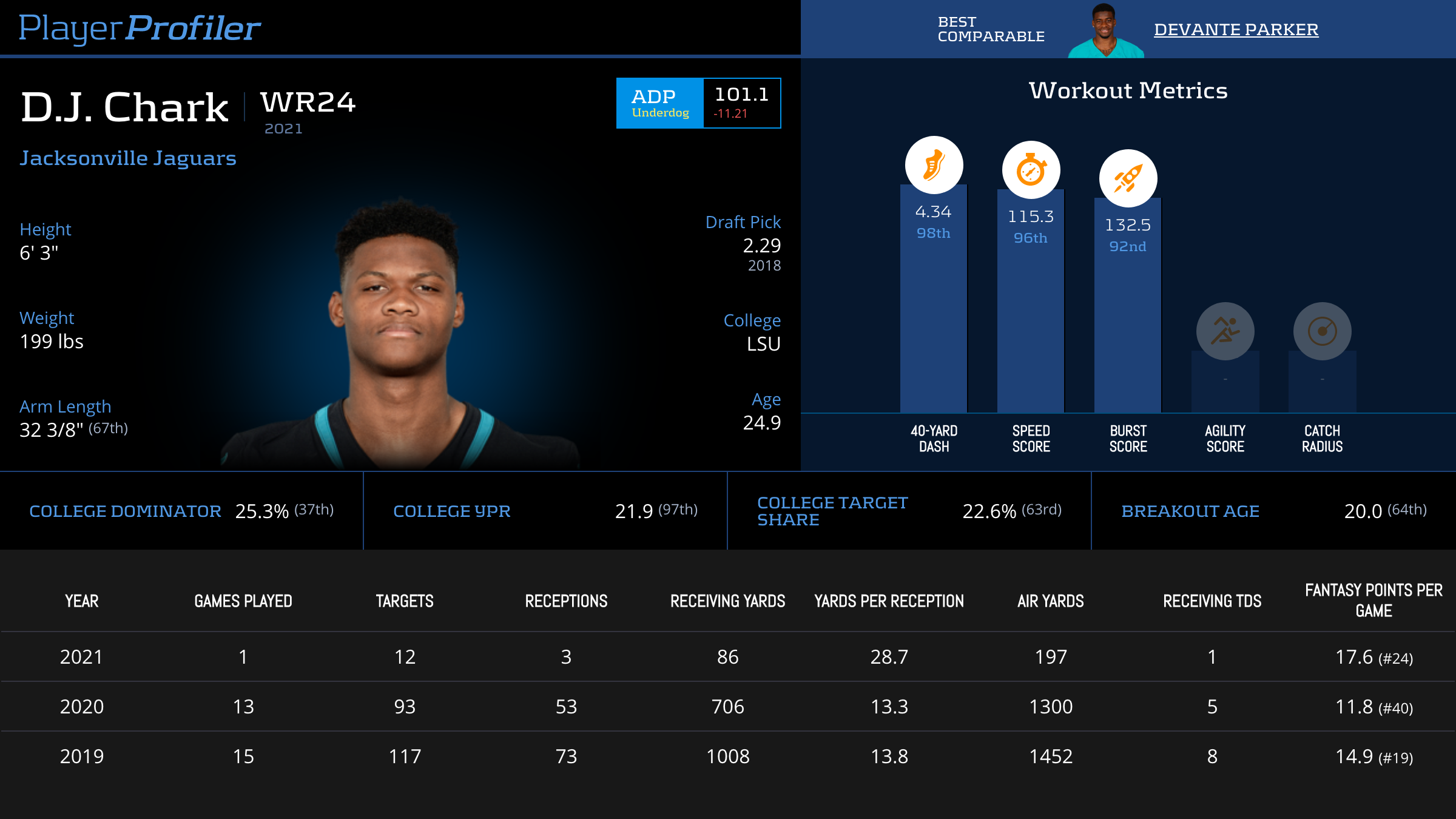 If you put up 73 receptions, 1,008 yards, and 8 touchdowns at the age of 22, you’re a good football player, end of discussion. Last year, Chark played with Gardner Minshew, Mike Glennon, and Jake Luton; with a generational quarterback in Trevor Lawrence entering the fold, I simply couldn’t see how he could be faded.

In Week 1, Chark, as usual, commanded more targets (12) than Shenault (9) with a 25-percent Target Share. He also had more valuable targets: 4 Deep Targets (No. 2 behind Tyreek Hill), 16.4 yards Average Target Distance compared to Shenault’s 3.1 yards, and 197 Air Yards (again, No. 2 behind Hill). Furthermore, Jacksonville had the second-most favorable Game Script in Week 1 and they will continue to play from behind.

If Chark continues to be the number one option and get those valuable, deep targets while playing from behind, I can envision him finishing as a mid-high end WR2. Don’t be scared because he regressed in 2020. Allen Robinson also had a strange down year sandwiched between amazingly productive seasons. He too struggled because of a terrible situation, but talent wins out in the end.

I’d rather have Chark than players like Tee Higgins, Adam Thielen, and D.J. Moore.

At this point, Hockenson is a chalky pick to become a star this year. However, he’s still worth mentioning for certain people, specifically, managers with George Kittle. I prefer not doing 2-for-1s, but if you have Kittle on a team, please trade him for Hockenson and another FLEX-able asset right now.

This year, Hockenson will outperform Kittle and displace him from the elite tight end tier alongside Darren Waller and Travis Kelce.

I loved Hockenson coming into this year because his competition for targets are Quintez Cephus, Kalif Raymond, Trinity Benson, Tyrell Williams, and Amon-Ra St. Brown. That has to be the most JAG-filled wide receiver room in the whole league. Hockenson also has elite pedigree as the No. 8 pick of the 2019 NFL Draft alongside fantastic measurables. I fact, his Best Comparable Player is Travis Kelce. Furthermore, his 100-plus targets last year signaled that a full breakout was incoming.

In Week 1, Hockenson ran the most routes of any tight end, had the most slot snaps of any tight end, displayed his athleticism with 45 (No. 3) Yards After Catch and averaged 3.4 (No. 3) yards of separation on his targets. What’s most encouraging from those metrics is that Hockenson is viewed as a receiver with his routes run and slot snaps. And while 10 targets at tight end is already elite, Jamaal Williams and D’Andre Swift certainly ate into his Target Share with their 9 and 11 targets, respectively. This level of running back targets is unprecedented and it would be silly to project similar rates going forward, which means even more targets for Hockenson.

Hockenson will get at least 130 targets, is a freakish athlete, and has strong draft pedigree with virtually no competition for targets. The Lions offense will be bad, but not cripplingly bad as to tank his value.

The only tight ends I’d rather have than Hockenson are Waller and Kelce, and I’d gladly pair someone like Mark Andrews and a WR2 to acquire him.

Darrell Henderson rose up everyone’s draft boards when Cam Akers got injured. But then, the hype died down, the Rams acquired Sony Michel, and Henderson fell too far down rankings. I strongly believe that Sean McVay would love to use Henderson as a workhorse back if he wasn’t so small and injury prone. He even said as much earlier in the offseason. Beyond that, Henderson already showed pass catching ability when he had 24 targets in 2020 while playing less than 50-percent of the team’s snaps. I figured that as long as Henderson was the 1A to Michel’s 1B and he got receptions on this dynamic offense, he would be valuable. 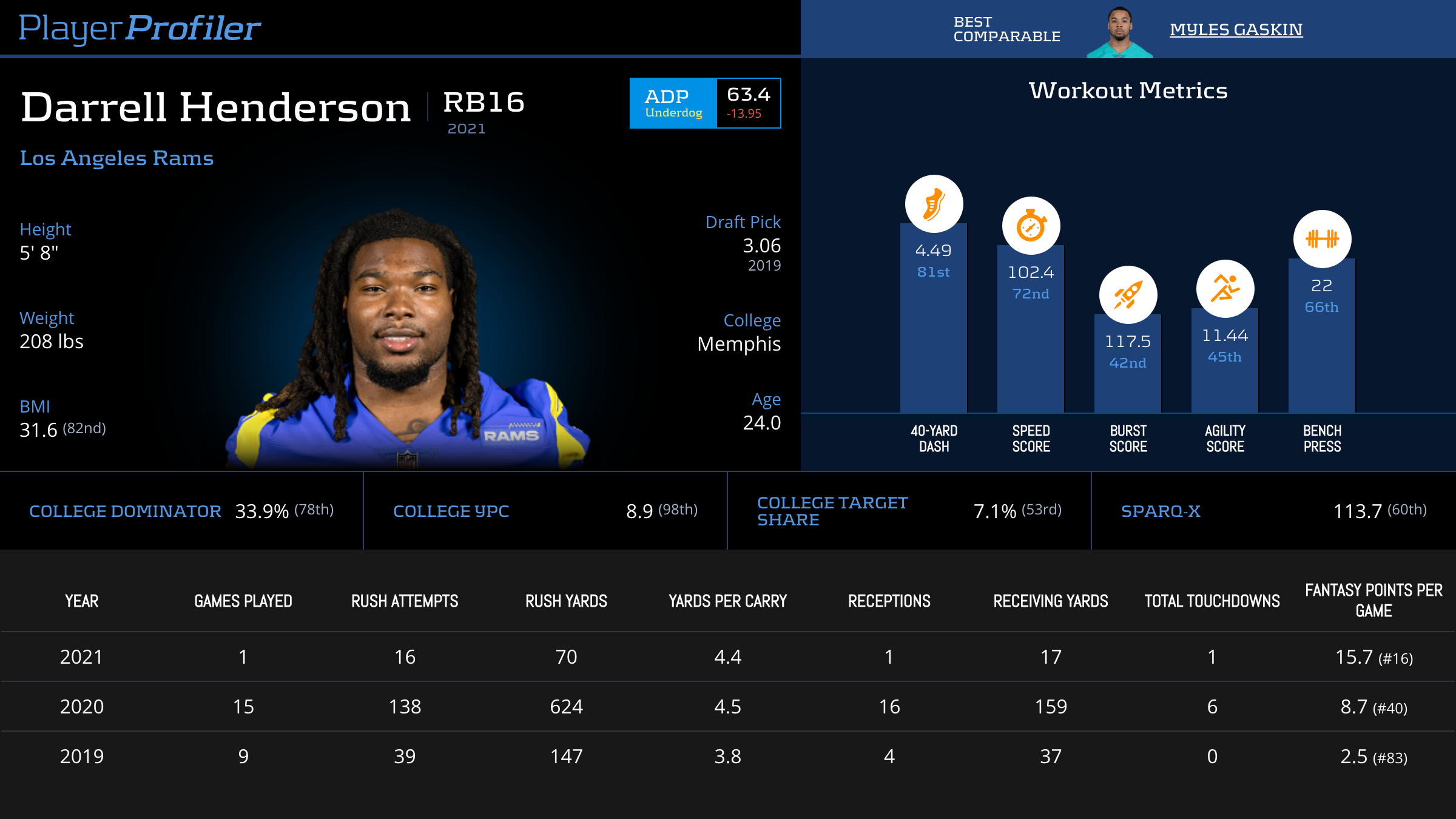 Week 1 confirmed exactly what I wanted to see out of Henderson, although I don’t expect him to continue to get a 96.0-percent Snap Share and 94.4-percent Opportunity Share. Henderson got 16 carries and a touchdown in a strange Rams-Bears game, looking agile and quick on his runs. Henderson saw, on average, 6.9 defenders in the box, which is about average, but the Rams had a large lead and the Bears could expect the run which skews this number.

While Michel will take on a larger role in the offense going forward, Henderson can easily see 13.5 carries and 3.5 targets per game which translates to 230 carries and 60 targets. While McVay seems to be worried about Henderson holding up for a whole season, in the case that he does, Henderson could finish as an RB1 given the offense’s ability to run the table and the defense keeping them in positive Game Scripts.

I’d rank Henderson just ahead of Najee Harris because of the Steelers’ offensive line and about equal to Antonio Gibson and Aaron Jones.