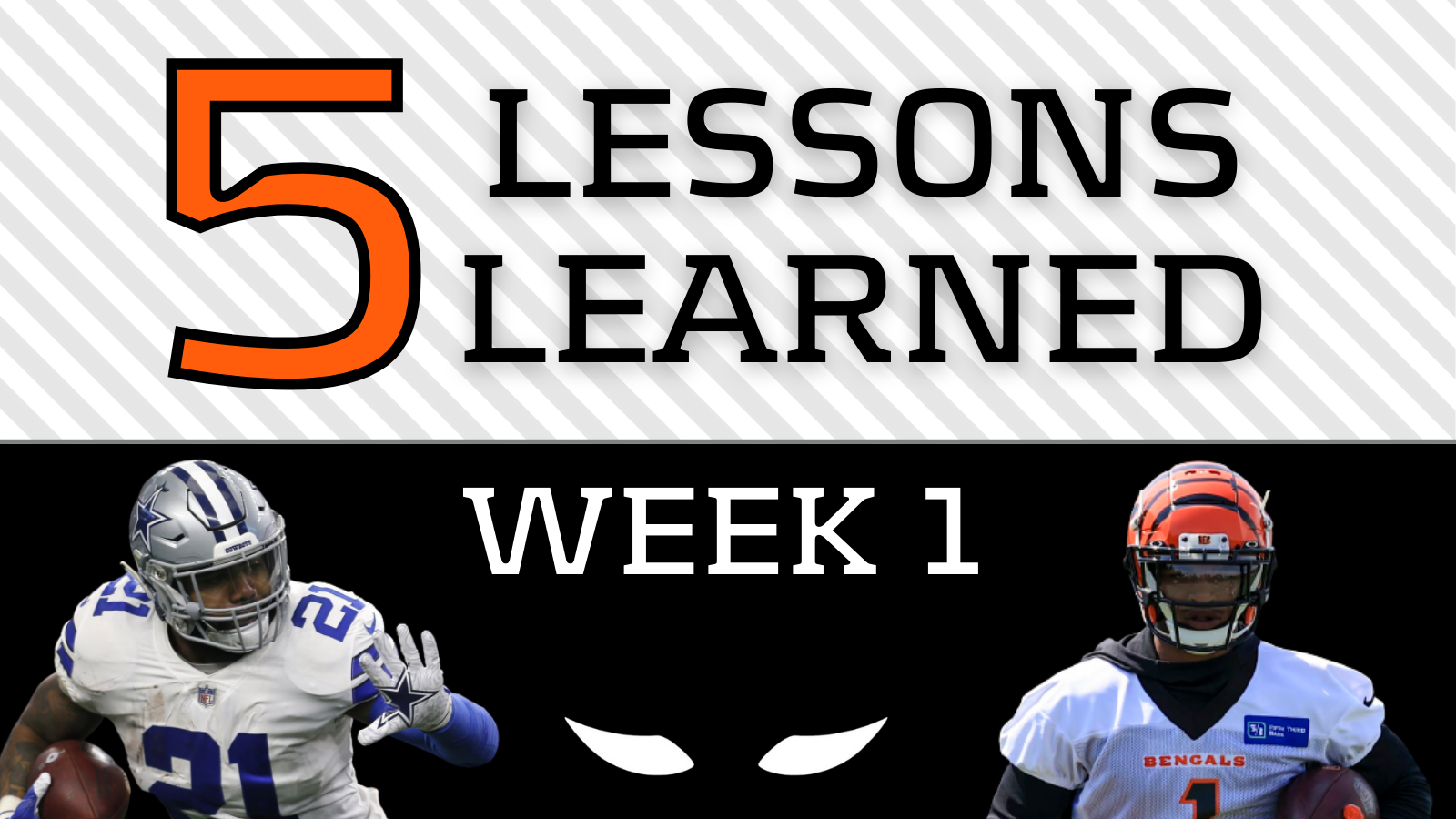 Dak Prescott made his thrilling return in Thursday Night’s season-opening loss to the Buccaneers. Dak lit up the scoreboard, putting up almost 60 passes and over 400 yards.

But, where was Ezekiel Elliott?  Zeke was a no-show in Week 1. Should we panic?

Not at all. This really should not have been a surprise. Over the last two seasons, the Bucs have been the league’s top run defense. The Cowboys had to sit OL Zack Martin, one of the league’s best run-blocking guards. Already a pass funnel defense, Tampa had to sit starting safety Jordan Whitehead with a hamstring injury. In Thursday’s first quarter, Tampa lost starting CB Sean Murphy-Bunting to a dislocated elbow. Safety Mike Edwards, Whitehead’s backup, missed significant chunks of the game himself.

So, what could the Cowboys do? They’ve got Prescott, who was setting records in 2020 before getting hurt, returning and throwing to Amari Cooper, CeeDee Lamb, and, before he got hurt, Michael Gallup. They could either run into Tampa’s brick wall defensive front or throw, throw, throw. So, they threw, threw, threw.

This was just not going to be Zeke’s night. But don’t lose faith. Elliott played 70 of Dallas’ 84 snaps (83-percent), compared to 20 for backup Tony Pollard. And the Cowboys will not play another team remotely as strong against the run until December, when they travel to New Orleans.

Action: Don’t lose confidence in Elliott. He is Dallas’ bell cow and will assume that role as early as next week against the Chargers. If you have him, certainly don’t trade him. If you don’t, the price might never be lower so see what it might cost to get him.

Better days are on the horizon for Ezekiel Elliott⭐️ pic.twitter.com/HMjHm9c74s

When Raheem Mostert has been on the field, he has been outstanding. For his career, he has averaged 5.7 Yards per Attempt. If he had enough carries, that would tie for the all-time record with Hall of Famer Marion Motley. And, according to NFL Next Gen Stats, Mostert was the league’s fastest ball carrier in 2020 at 23 mph.

It’s a shame, but Mostert just can’t stay on the field. Now 29 years old, Raheem has never carried more than 137 times in a season. In today’s opener against the Lions, it took two carries before he left for the day with a knee injury.

While Mostert’s injury is hopefully not season-ending, Kyle Shanahan just can’t rely on him. The prevailing thought had been that the next up would be third round pick, Trey Sermon. Surprisingly, though, that wasn’t an option. Shanahan made Sermon inactive, opting instead to dress JaMycal Hasty and sixth-round draftee Elijah Mitchell. Once Mostert went down, it was all Mitchell against the Lions.

So, should we spend a boatload of FAAB on Mitchell?

Not so fast. In 2020, the 49ers had four different lead rushers, none of whom led the team in rushing more than two weeks in a row. Just when it looked like Mostert would be their bell cow, he got hurt and Jerick McKinnon took over. Later, Hasty and Jeff Wilson took turns. In 2019, it was Matt Breida, Tevin Coleman, and Mostert. In 2018, four backs shared the load.

The 49ers haven’t been able to commit to a single RB under Shanahan and they don’t seem to care about draft capital. So, any of Mitchell, Hasty, Mostert, or Sermon could lead the team in rushing any week going forward. With the easiest schedule against the run this year, it might not matter who’s back there. He will succeed. The hard part will be figuring out who.

Action: Put a decent bid in for Mitchell if you need RB help but don’t go overboard. Don’t expect the 49ers to commit to any single running back this year.

Three wide receivers, Ja’Marr Chase, Jaylen Waddle, and DeVonta Smith, were taken in the first 10 picks of this year’s NFL Draft. This was the first time any WR had been chosen top 10 since 2017. Many fans lamented those picks, saying the Bengals, Dolphins, and Eagles all should have addressed offensive line needs instead.

When Chase struggled with drops throughout the preseason, many were ready to write him off before a single NFL regular season snap. Waddle, oft-injured at Alabama, gave Miami a scare in their preseason game against Atlanta. And Smith is 166-pounds. There’s never been a 166-pound star NFL receiver.

But all three had the shower narrative with their QBs, for what that’s worth. Many of us that drafted these players in our fantasy leagues sat them this first week to see how they would do.

Well, to start, all three of their NFL teams won.

And how did they produce?

Action: All three were immediately targeted and produced for their teams in their first NFL games. If you drafted any of them but sat them on the bench in Week 1, don’t waste any more time. Go ahead and start them the rest of the way. They will remain target magnets on their teams.

Trevor Lawrence passed for 332 yards and 3 TDs in his NFL debut. While far from perfect, his numbers, and how he achieved them, tell us to expect much more of the same throughout 2021. Much of his scoring was in garbage time, but hey, garbage time counts for fantasy football. And you can be sure Jacksonville will have lots of garbage time this year.

This is the same Jaguar team that went out today and gave up 449 yards of offense to the Houston Texans, getting blown out by a team led by a 32-year old quarterback (Tyrod Taylor), a 31-year old running back (Mark Ingram), and who had a 35-year old receiver (Danny Amendola) tie for the team the team lead in receptions. Everyone was convinced the Texans were not trying this year. But they crushed the Jags and gave Lawrence and company plenty of garbage time scoring.

Action:  Go ahead and start Lawrence and his receivers going forward. While there might not be many rushing opportunities for James Robinson or Carlos Hyde, there will be plenty of scoring going forward. Just hold your nose.

Russell Wilson throws 4 TDs to lead the Seahawks to a season-opening win.

“Russ Cooks!” Wait, where have we heard that before? That’s right, he did the same in 2020 and was a league MVP leader in the first half.

What might be different about 2021? Well, to start, Seattle brought on a new offensive coordinator in Shane Waldron, formerly the LA Rams’ passing game coordinator under Sean McVay. Waldron worked closely with Wilson this offseason, focusing on introducing adjustments based on what the defense does. Though the Seahawks still favored the run today, when the Colts rolled coverage to D.K. Metcalf’s side, Wilson found Tyler Lockett, Gerald Everett, and Will Dissly with great success.

While the Seahawks still have the challenge of facing off against their NFC West foes, this year they have less-imposing stints against the Jaguars, Texans, Lions, Vikings and Bears.

Action: Not much to do but enjoy if you drafted Wilson, as recommended by PlayerProfiler. Hope that Lockett, another Underworld favorite, stays healthy.