There’s nothing fantasy football managers love more than young players with superstar potential, especially at the wide receiver position. Every year, countless lists hype up rookies as “the next Odell Beckham” (although Justin Jefferson may have stolen that crown). If a player fails to perform as a rookie, never fear, they’re still young. A rookie bust is in the ideal position to be predicted as a second-year breakout heading into the next season, and a third-year post-hype sleeper after that.

But hype without production can only take you so far in the fantasy world. After a few years in the league, these Combine champions and dynasty darlings lose their shine. A few establish themselves as true fantasy contributors, but those that don’t do so fall out of favor, replaced by a fresh crop of young “breakout candidates.”

Despite, or in many ways because of, their unsexy name brands, these veteran wideouts can be the best values in the draft. This is especially the case when they find themselves in new, more fantasy-friendly situations.

Heading into the 2021 season, fantasy managers are severely undervaluing three of these players in particular: Corey Davis, Will Fuller, and Curtis Samuel. Each of these vets has promising underlying metrics and the potential for a mid-career renaissance that will lead to huge returns on investment for savvy fantasy owners.

I know what you’re thinking. Saying that this year is the breakout year for Corey Davis has become a tired trope in the fantasy community. He may be the most hyped player to have never even cracked the top 25 in scoring over a season.

But there’s a reason Davis always draws this love. Looking at his profile, multiple stats immediately jump out. His 51.6-percent (96th-percentile among qualified wide receivers) College Dominator Rating is top tier. Critics will argue (fairly) that his college excellence hasn’t translated to the pros. However, many of his NFL efficiency metrics are elite. In 2020, he ranked among the top 10 in both Production Premium and Fantasy Points Per Route Run. 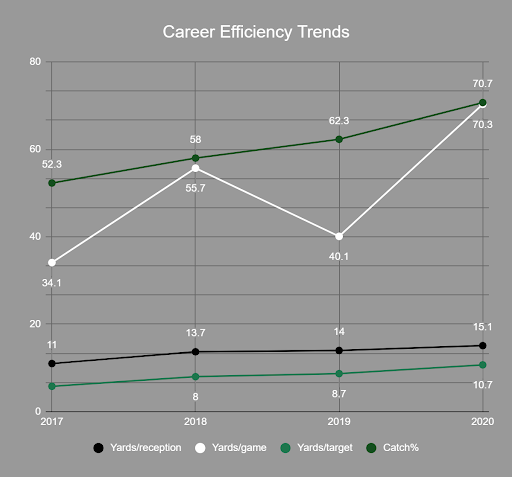 This remarkable efficiency was not a new phenomenon for Davis, but a continuation of a trend throughout his career. The former first-rounder has improved year-over-year at a consistent pace.

With elite efficiency, the only thing missing for Davis to emerge as a top 20 wide receiver is volume. Luckily, he finds himself on a Jets team that should be a perfect storm of opportunity. A barren WR room “headlined” by dynasty-starlet Elijah Moore and steady but unspectacular slot specialist Jamison Crowder is begging for Davis to assert himself as a true alpha. On top of that lack of competition, New York features a young gunslinger quarterback that should be slinging it early and often thanks to a bottom-10 defense. All signs point to Davis finally coming good on his hype and easily outperforming his draft position in 2021.

In many ways, the case for Will Fuller is similar to the case for Corey Davis. The explosive 27-year old has always been efficient from a fantasy perspective when given opportunities. His insane +44.8 Production Premium and 11.7 yards per target both led the wide receiver position in 2020.

Fuller’s efficiency has translated to fantasy points. Prior to his PED suspension after Week 12 of last season, he was WR5 in Half-PPR formats. In 2017, he was the WR2 across the six weeks he was fully healthy. Unfortunately, the cherry-picked nature of these stats points to the knock on Fuller. Thanks to many injuries and the suspension, he has been unable to stay on the field since entering the NFL. 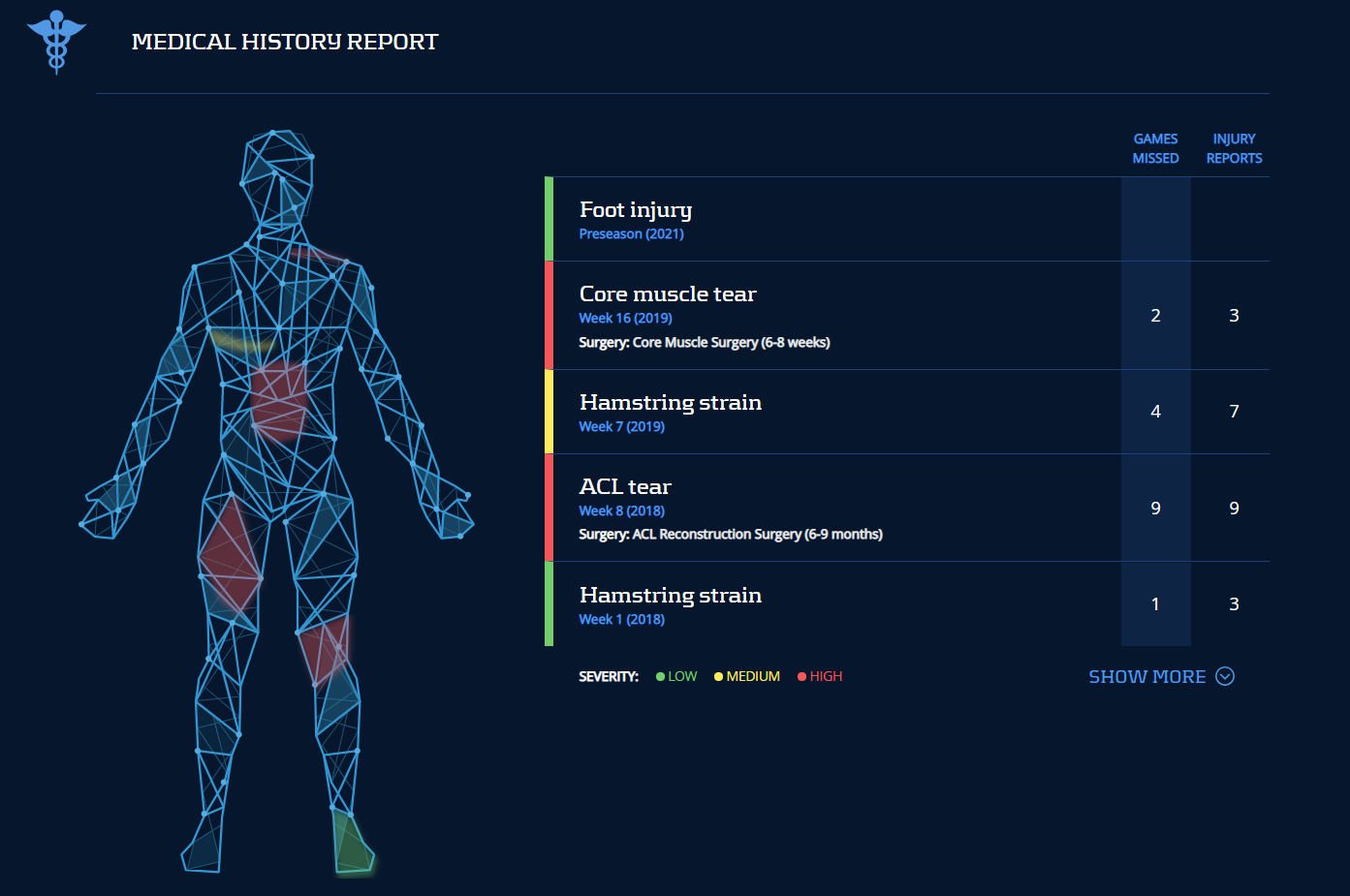 Fuller has played over 11 games just once in his five-year career. A litany of major and minor injuries have combined to force him to miss 22 games.

However, his injury concern is overblown, making him a huge bargain at his current ADP.

At first glance, his laundry list of injuries is hardly confidence-inspiring, but there’s reason for optimism going forward. Outside of an ACL tear in his sophomore season, the injuries that caused him to miss major time are those with lower re-injury risk: fractures and a core muscle tear. Don’t get me wrong, Fuller is an injury risk, but not one as big as the fantasy community tends to think. The chance he misses time has already been baked into his ADP, and then some.

When he is on the field and getting targets, Fuller is an elite fantasy wide receiver. And targets should be easy to come by in Miami, where (unless you’re a big fan of Jaylen Waddle) the Notre Dame product is easily the most talented receiver heading into this season. Concerns about health and Tua Tagovailoa’s inability to throw deep are valid, but they have been overblown. Pick him up wherever you can as the cheapest player with proven top-5 WR talent in the draft.

In a way, Curtis Samuel has already had his breakthrough year. In 2020, the second-rounder out of Ohio State finished in the top 25 in WR scoring for the first time. One key to this increased production was the college running back’s ability to receive carries as well as targets. With Christian McCaffery sidelined, Samuel’s role in the Panther’s offense expanded. He totaled 200 yards and two touchdowns on the ground on 41 carries.

Having insane 100th-percentile 4.31 speed helps the hybrid playmaker make the most of every single touch. The game-breaking impact of his speed shows up in receiving metrics as well. In 2020, Samuel ranked No. 3 in Target Premium, which measures how many fantasy points a player generates compared to others on his team per target. Putting up this stat on any team is impressive. Doing so on an underrated Panthers offense that also saw Robby Anderson and D.J. Moore finishing in the top 25 of fantasy wideouts is truly remarkable. 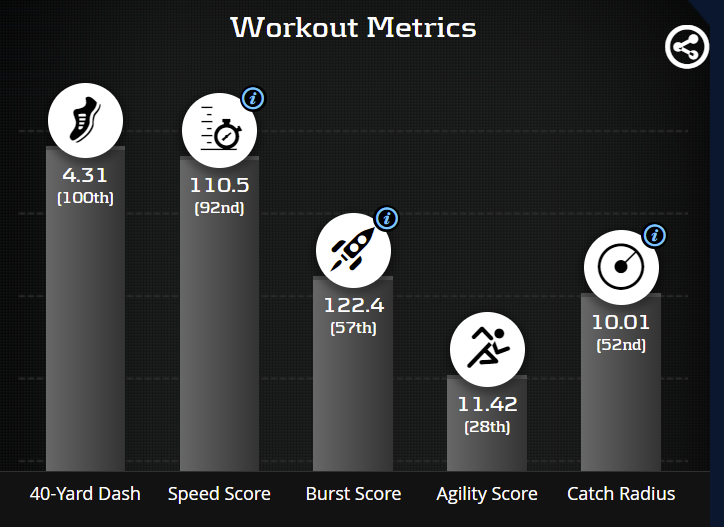 Despite all he showed in 2020, fantasy managers are letting Samuel slip to be the 45th wide receiver off the board in Underdog drafts heading into 2021, a screaming value.

This pessimism may be due to the change in scenery: It has been five seasons since the Washington Football Team has produced a top 35 receiver not named Terry McClaurin. However, this Washington team is not the team of old, in more ways than its name. Ryan Fitzpatrick may not be a long-term answer at quarterback, but he is certainly capable of supporting fantasy relevant pass-catchers. Fitzpatrick’s tendency to look deep early and often should pair well with Samuel’s burner speed and elite deep-threat ability.

Highest among all WRs ? pic.twitter.com/JV9MFZjKKn

Additionally, the Football Team would not have signed Samuel to a $34.5 million contract without a plan in mind to maximize his production. Both head coach Ron Rivera and OC Scott Turner worked with his unique talent in Carolina. They’ve noted that analytics support putting the ball in his hands and plan to do just that. This will undoubtedly include Samuel continuing to take carries, both on jet sweeps and lined up in the backfield.

Continuing to get valuable touches on the ground, combined with increased opportunity through the air as the guaranteed number two target in the offense, can only lead to good things for Samuel. Even if his efficiency drops somewhat, increased volume should more than make up for it. Don’t let the semi-unconventional way he scored his points fool you: Samuel was a top 25 receiver last year, and should easily be in that range again this year at the bargain price of a double-digit round pick.

The key to finding value in fantasy drafts is zigging while others zag. This year, dynasty hype trains are spilling over to redraft rankings, and rookie fever is at an all-time high. Take advantage of this by swerving much-hyped youngsters for these three overlooked NFL veterans that have proven they can produce at the highest level.