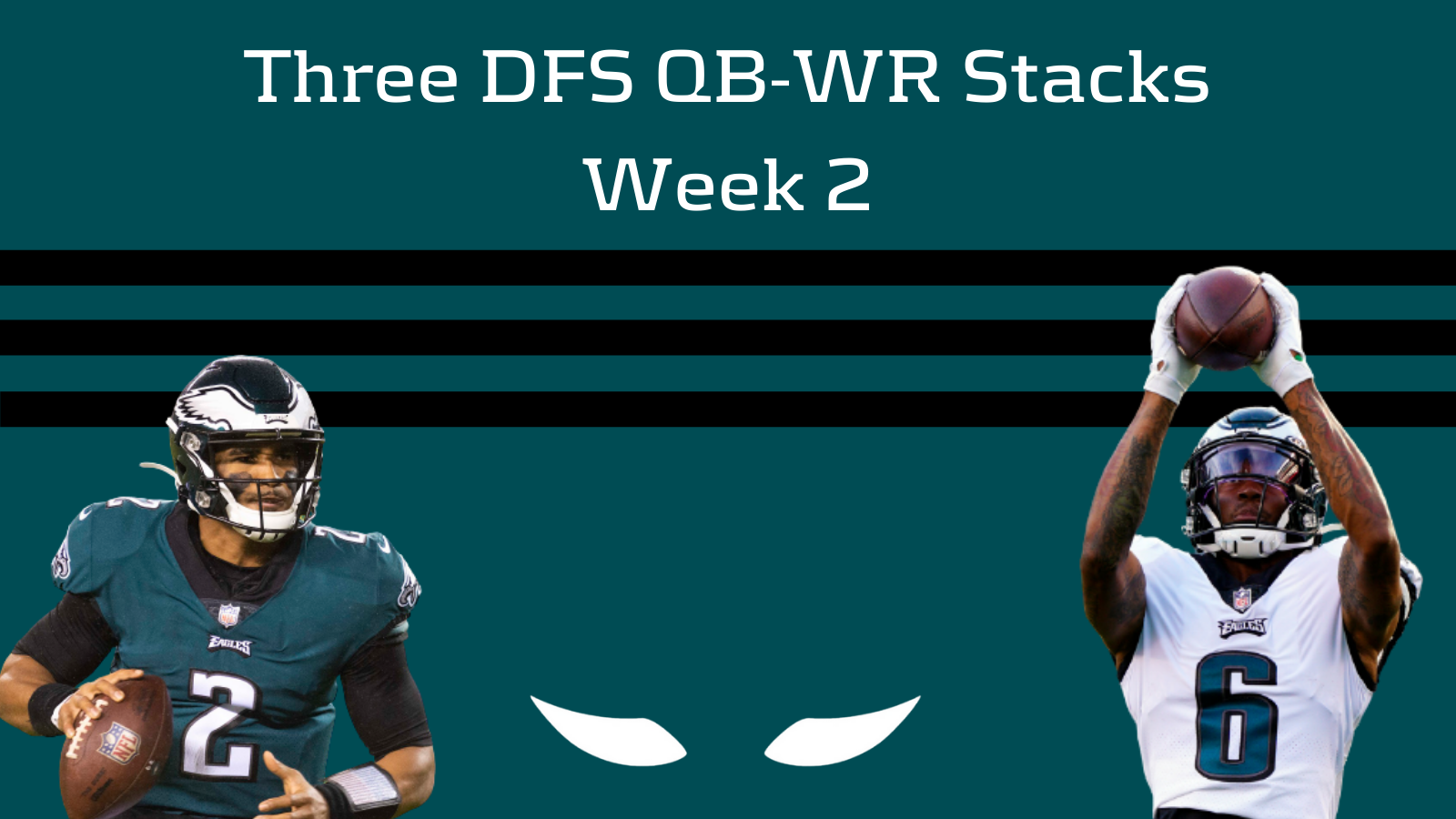 Welcome back everyone to another edition of QB-WR stacks for daily fantasy football. If you missed last week’s article, I introduced this series as one with the goal of using the advanced stats and metrics here at PlayerProfiler to identify strong QB and WR pairs to play in Guaranteed Prize Pool (GPP) tournaments. By stacking QBs and their pass catchers in the same lineups, we are looking to capture the correlated scoring between the two. Games where the QB is racking up fantasy points are likely to be games where the WRs for that QB are also racking up points due to the nature of shared fantasy points for receptions.

As a result, we are looking to predict which games will feature high scoring environments to help us climb the leaderboards in daily tournaments. In this era of the league, we are looking for QBs that will have tremendous passing volume or accumulate points on the ground with it’s friendlier scoring structure. Once we’ve identified potential QBs, the goal shifts to identifying WRs in offenses that concentrate targets to as few pass catchers as possible. That gives us the best shot at doubling up our QB’s points by targeting our WR.

Before jumping into the current week, I want to start these articles with a look back at last week’s recommendations from a process, but also results, perspective. Jalen Hurts and Devonta Smith kicked us off last week. Hurts was expected to be a fairly popular option but was at a price that was too good to turn down. Checking in at 10-percent rostered and 11.2-percent for Smith, there was excellent value for those that went with this stack. Hurts in particular showed why there is so much excitement for his fantasy outlook this year, and the rookie WR hit the ground running scoring an early touchdown in his first game while working as the team’s WR1.

Trevor Lawrence and Marvin Jones made up the second recommended stack. As the week went on Jones became a very popular option. He was played on about 15-percent of lineups. The stack with Lawrence, at only 3.5-percent however, provided some additional juice. Lawrence had an up and down day throwing 3 touchdowns and 3 interceptions, but his 25 DK points surpassed salary expectation. Despite far better game script than projected, Jones salvaged an otherwise unremarkable day with a late touchdown.

Finally, the last stack featured Joe Burrow and Tee Higgins. At 13.3-percent rostership, Higgins was also a popular WR, but the stack was unique with Burrow rostered at only 3-percent. The Bengals came out a little run heavy, but Burrow settled into a nice day connecting on touchdowns to Higgins and Ja’Marr Chase. In a game where he temporarily left to get an IV, Higgins finished with a decent line of four receptions for 58 yards and a touchdown but didn’t find that ceiling game we were hoping for.

Week 2 presents as a fun week for DFS. All four late window games have totals above 50 while none of the early window games do. If things aren’t going well early, take advantage of opportunities to late swap to get leverage on a different afternoon game. The most popular will surely be the Chargers-Cowboys game, so for that reason, we’re going to avoid any discussion of stacking there.

The other high total games don’t appear to be slam dunk stacking opportunities at the onset. For the Cardinals and Seahawks, the stacks are quite expensive and both offenses were less concentrated than we had hoped for last week. The other game features the Bucs as a 12-point favorite over Atlanta. It’s fair to worry if the Falcons will be able to keep up enough to force Tom Brady to continue throwing. As a result, we’re going to focus on three other games that hopefully will go under the radar.

If it ain’t broke, don’t fix it? We’re going right back to the Eagles this week. After smashing on Sunday, DraftKings raised Jalen Hurts‘ price by only $100 to $6.5k. He showed everything we were hoping for with efficient passing (77.1-percent completion percentage) and rushing activity (62 rushing yards). That dual threat ability creates an incredibly high floor and ceiling on a weekly basis. This could be the last chance we get to play Hurts for less than $7K. Don’t let the defensive matchup scare you away.

Devonta Smith received more of a price bump, but at $5.4k he’s still too cheap as the top option in this offense. He led the team in snaps, routes run, and targets. In a game where the Eagles project to be trailing, that passing volume could rise even more this week. DraftKings seems to not want to overreact to Week 1 with salaries, so take advantage in situations where we feel more confident coming out of last week.

On the surface, Week 1 didn’t look great for the Bills. The offense sputtered at home in a loss to the Steelers where they were favored going in. The opportunity was there though. Josh Allen recorded 51 (No. 4 among quarterbacks) pass attempts, 6 (No. 4) Deep Ball Attempts, and 492 (No. 2) Air Yards combined with 9 (No. 2) rushing attempts. He just missed on the touchdowns, which we know are volatile. This week, they’re back at it on the road against a competent Dolphins team that should keep them throwing like they did in Week 1 and in 2020.

It speaks to the excellence we saw last year that Stefon Diggs‘s nine receptions for 69 yards was a letdown in Week 1. With the Steelers keyed in on stopping him, he still earned 14 (No. 4) targets on a 28.6-percent (No. 7) Target Share with 150 (No. 4) Air Yards. That’s elite opportunity. We can be confident with that usage that splash plays are coming, unlocking a massive ceiling potential.

This week when everyone is on Dak Prescott and Amari Cooper/CeeDee Lamb or Justin Herbert and Keenan Allen, paying up slightly to pivot onto the Bills provides an appealing leverage point in tournaments.

Another way to pivot off of chalky expensive stacks is to totally alter the structure of your lineup. By paying all the way down at $5.1K for Zach Wilson and $5.3K for WR1 Corey Davis, you free up copious salary to play other high end players the field can’t afford due to their stack.

The 54.1-percent completion percentage and 7.0 (No. 22) Yards per Attempt did not look great in Week 1 for Wilson’s debut. However, beyond that there are encouraging signs for fantasy. Wilson was a gunslinger. His 10.5 Air Yards per Attempt ranked No. 2 in the league, which means he was consistently pushing the ball down field, providing opportunity for big plays. He didn’t scramble at all, but with over 200 rushing yards per year during college, we know he can pick up some points on the ground when needed.

Zach Wilson was launching it in Week 1

Joining the Jets in the offseason, Davis stepped into the clear alpha role in this new offense. His 91.9-percent Route Participation led the team, as did his seven targets and 120 Air Yards. He’ll continue to be very involved in the downfield attack for the Jets this week, and coming off a top five fantasy finish, we know the ceiling is there.