Greetings everyone, welcome back to our weekly installment of Quarterback-Wide Receiver stacks to target in daily fantasy football. As always, the aim here is to identify under the radar combinations of Quarterbacks and Wide Receivers on the same NFL team to play in our daily fantasy lineups in order to get leverage on the field by effectively doubling our points when that pair of players connects for touchdowns and big plays. To help us with that, we dig deep into the advanced stats and metrics here at PlayerProfiler.

Once again points were at a premium on a challenging slate last week. The field consolidated on six QBs in large field tournaments with Kyler Murray, Tua Tagovailoa, Dak Prescott, Aaron Rodgers, Jimmy Garoppolo, and Josh Allen in descending order all above 9%. No one else was above 6%. Four of those underwhelmed scoring less than 15. Two of our recommended QBs were among that bunch. Looking at the top of the leaderboards, it was essentially Tyler Huntley or bust this week.

We paired Allen with Stefon Diggs who was half as popular as teammate Gabriel Davis. We anticipated that roster share discount and attacked the leverage opportunity. Unfortunately the chalk hit with Davis scoring two touchdowns while Diggs was held in check. Allen had a fine day finishing with 21 DK points. Diggs only had 13.5 at sub-10% play.

Murray was featured in our second stack with A.J. Green. The Cardinals shocked the league this week with a completely ineffective offensive showing in a loss to the Lions. Kyler was the most popular QB of the week, but even more surprising was Green’s popularity. At almost 18%, the thesis of the play was blown up expecting him to go underplayed relative to teammates Christian Kirk (17%) and Rondale Moore (5%). Both disappointed with Kyler scoring 14 and Green 10.

Our final stack caught significantly less steam than the first two. We opted to go cheap with Teddy Bridgewater and Courtland Sutton. That game was a messy slog that saw Teddy suffer an injury in the third. Both players were under 2% played but didn’t get anything going in the slightest.

We’re facing another low scoring week ahead of us. At the time of writing, no game has a 50 point total. The closest is Rams Vikings at 49.5. Most of the top end QBs are on the slate though with Patrick Mahomes, Josh Allen, Tom Brady, Justin Herbert, Lamar Jackson, and Jalen Hurts.

The elite skill position plays look to be lacking however. Cooper Kupp is unstoppable, but other than him there are reasons for concern with the other $8k+ options. Tyreek Hill is on the Covid list, and Austin Ekeler is questionable. Dalvin Cook faces the intimidating Rams DLine while teammate Justin Jefferson contends with Jalen Ramsey. That should drive down popularity for any budget QB options.

In the absence of any marquee shootouts and limited spend up options, I expect roster share to be concentrated at the top of the QB position, but fairly evenly among that group.

Kicking off this week we’re playing Joe Burrow with his rookie top receiver, Ja’Marr Chase. The Bengals are slight favorites against the Ravens in a crucial matchup for both of their playoff chances. Burrow has his entire WR corps healthy for this game while Joe Mixon is at least limited with an ankle injury.

Burrow has been hampered lately by a finger injury but hasn’t seen his efficiency suffer. On the season, despite ranking No. 15 in Attempts with 435, Burrow ranks eighth in Passing Yards with 3640 thanks to 8.4 (No. 3) Yards per Attempt. His 73.1-percent True Completion Percentage ranks fourth. This projects as a game with elevated passing volume that should lead to a big day for Burrow.

Over the latter stretch, Chase has 9 drops (158 air yards). 3 of those drops have come in the end zone, 4 have come on deep targets. If he caught all of those passes, he'd be averaging somewhere between 20.3 and 31.1 FPG

To pair with Burrow this week, we’ve selected Chase as the deep threat that matches up best with Baltimore’s depleted secondary. Chase’s 38.6-percent (No. 9) Air Yards Share and 24 (No. 5) Deep Targets represent ideal usage for fantasy. With his price holding despite some recent inconsistency and solid performances from both Tee Higgins and Tyler Boyd in recent weeks, his popularity should be depressed as well.

In the overview we mentioned the question marks surround some of the most expensive skill position players this week. For Justin Jefferson that would be the CB matchup going against Jalen Ramsey. That concern is overblown. The volume and efficiency are too much to shut down, and there will be routes away from Ramsey as well. Jefferson’s 137 Targets rank No. 3, while his 1719 Air Yards and 44.9-percent Air Yards Share rank No. 1. He has taken on the full workload, especially since Adam Thielen‘s injury.

This game features the highest total of the week and will be a popular game stack. Many will start with Matthew Stafford and Cooper Kupp, so opting for Kirk Cousins instead both saves money and creates differentiation on the field. With the Vikings projected as underdogs as well, Cousins should see more than his typical passing volume as well which hasn’t been lacking this year. Cousins ranks top ten in Attempts, Deep Ball Attempts, and Red Zone Attempts.

Finally, I’m going with a budget stack for our last recommendation. No one wants to play Trevor Lawrence this week. He caught a little bit of steam last week as people got excited about the matchup and the firing of Urban Meyer only to be disappointed once again. This week, there’s no buzz. But maybe there should be. The matchup is even better this week against the Jets. At only $5k, it doesn’t take much to return value. This pairing gives significant structural leverage by saving $2-3k at QB and locking in a cheap WR. This allows for playing multiple of those high end skill players with low roster share projections. 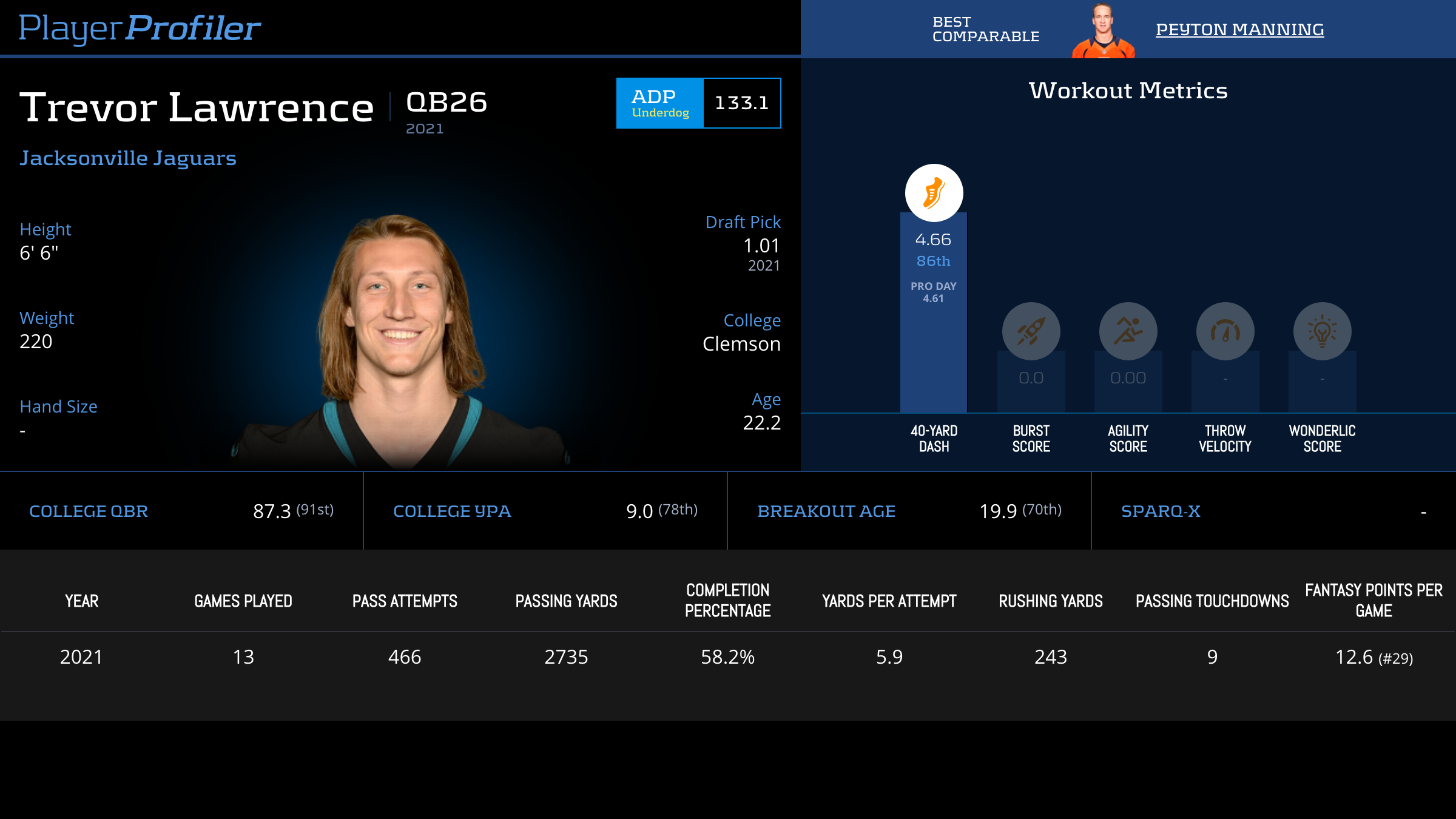 Marvin Jones makes the most sense for the stacking partner with Lawrence. He has the highest floor and ceiling combination compared to the other receivers on the team while not being significantly more expensive. He’s the target leader whose usage goes up in the red zone (25.7-percent Red Zone Target Share). We’re hoping this stack combines for a couple big plays but more so hope their salaries unlock elite players throughout the rest of the lineup that can win daily fantasy tournaments.