The fantasy playoffs are now in full swing! Congratulations to those who have advanced to the semifinals or the finals, depending on league structure. But no fantasy gamer made it this far to make it this far. There are more actual football games to diagnose and this one between the Cleveland Browns and the Green Bay Packers is no exception. On to the breakdown!

The Browns offense is decimated as any because of injuries and players placed on the reserve COVID-19 list. The most notable of which was Baker Mayfield, who wasn’t the first or the last. Jarvis Landry, Austin Hooper, and multiple starting offensive linemen soon joined him on that list. Battling multiple injuries, Mayfield has only registered a game with over 20 fantasy points once this season.

Whoever plays quarterback for the Browns, whether it’s Mayfield, Case Keenum, or Nick Mullens (who started Cleveland’s Monday afternoon Week 15 game) is not a fantasy option except for two-quarterback leagues against Green Bay’s solid defense.

There may not be worthwhile pass-catching options on this side of the ball either. Landry is still on the reserve COVID-19 list as of now. Should he and Mayfield clear the COVID protocols, Landry would be a safe play based on the sheer volume he receives. In the eight games he has started and finished, he has registered at least five targets in all of them. His 24.0-percent Target Share sits at No. 20 among qualified wide receivers, and his 28.4-percent Target Rate ranks No. 8. However, his efficiency lags behind, with 6.6 (No. 92) Yards Per Target and 1.88 (No. 40) Yards Per Route Run. Landry is a volume-based floor play, but would require Mayfield playing to be worth trotting into lineups.

Fellow Browns receiver Donovan Peoples-Jones is the exact opposite. Peoples-Jones does not garner the types of targets Landry does since he is utilized down the field, evidenced by a 15.4 (No. 5) Average Target Distance, 17.7 (No. 3) Yards Per Reception, and 11.1 (No. 4) Yards Per Target. However, he is seeing a healthy number of targets in his own right. In six of his last seven games, he has seen at least five targets thrown his direction. In those same games, he has played at least 60-percent of Cleveland’s snaps in all of them and at least 75-percent in four. There are better dart throws out there, especially if the Browns continue to miss Mayfield, but one could do worse than a super-athletic alpha profile receiver used often down the field. 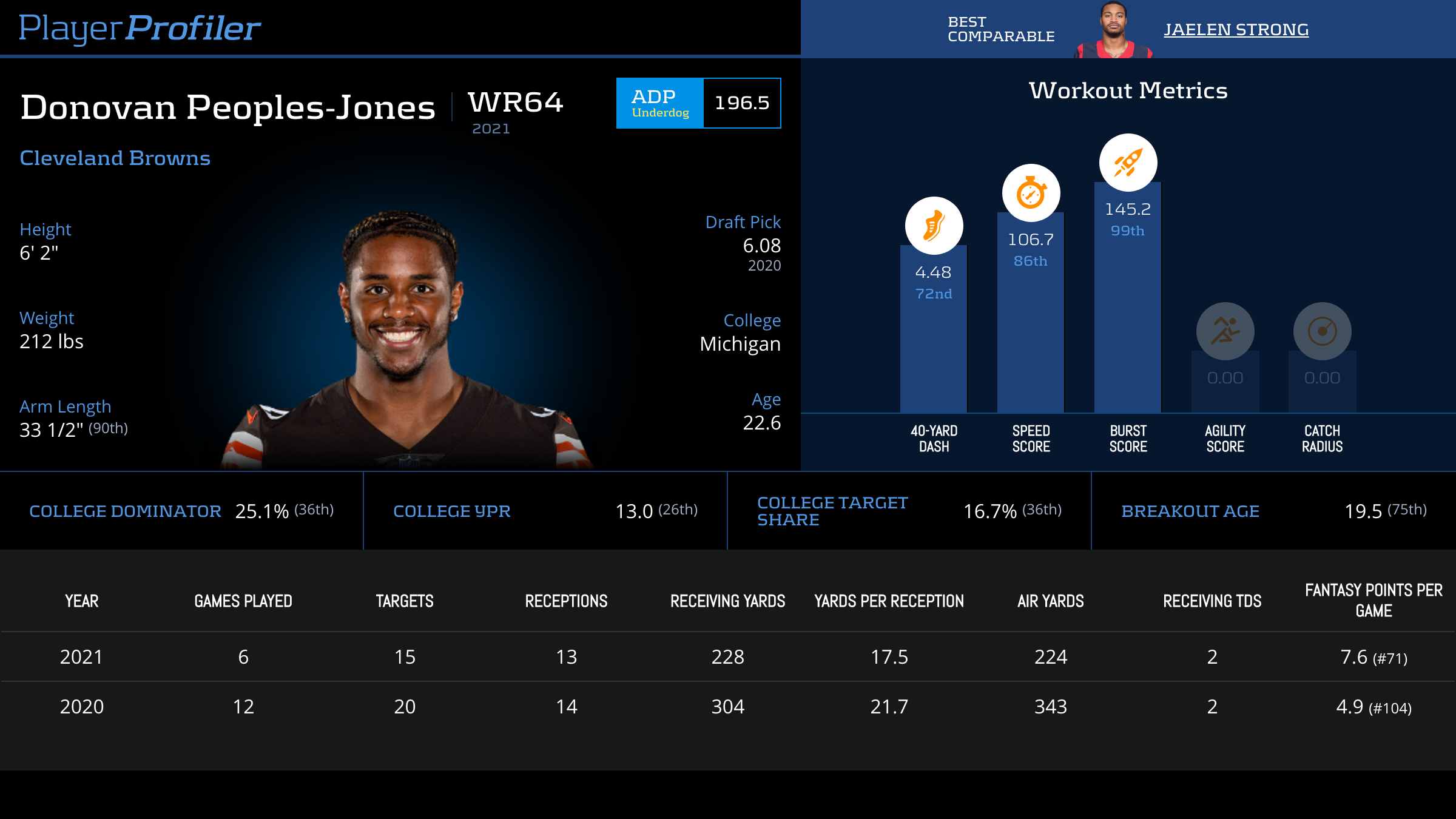 The only other worthwhile fantasy options come at the tight end position.

Cleveland loves to use multiple tight ends on a single play, partly because they have to. That’s no bueno for fantasy purposes because they often cannibalize each other. Austin Hooper is the leader of the group, but has scored at least nine points (in PPR scoring) five times in 13 tries. David Njoku is the most explosive of the bunch, with 9.7 (No. 3) Yards Per Target and 2.06 (No. 9) Yards Per Route Run, but doesn’t get the requisite playing time to take advantage of his gifts.

The same applies to tantalizing second-year player Harrison Bryant, who has two games this season catching at least three passes. Should one of Hooper or Njoku miss a game, the other would be a worthwhile play. With both off the reserve COVID-19 list, they become tough plays. If fantasy gamers needed to start one, Hooper would be the candidate with his edge in playing time.

All About the Chubb

Cleveland has no choice but to ride Nick Chubb down the stretch if they want to save their season. With all that ails their passing attack, Chubb is who the offense is built around and needs to be emphasized during the next three weeks. The Browns almost stole a win against the Raiders doing just that, dishing him the rock 24 times for him to scoot for 93 yards and score a touchdown. He has at least 20 touches in half of the 12 games he’s played and at least 15 in nine of the 12.

We know Chubb is one of the best in the NFL once he gets the ball in his hands; with 4.9 (No. 9) True Yards Per Carry, 690 (No. 7) Yards Created, and 13 (No. 3) Breakaway Runs. Even though his receiving work lags behind (he doesn’t have a single game above three receptions this season), he’s a lock for a heavy workload and gets the No. 25-ranked run defense according to Football Outsiders’ run defense DVOA metric. He is a locked and loaded RB1 this week. As for the rest of the backfield, D’Ernest Johnson remains a valuable handcuff in case Chubb gets injured, but nothing more. Demetric Felton has yet to make an imprint in the Browns offense, even with Kareem Hunt injured. There isn’t much else to see here.

What more is there to say about Davante Adams? His dominance is so overwhelming that the Baltimore Ravens and their depleted secondary resorted to having *two* defensive backs line up against him before the snap. It actually (sort of) worked! He *only* went for 44 yards and a touchdown on six receptions and seven targets. It is rare to see him not dominate the stat sheet as he does normally, but when a receiver is this great and gets peppered with targets, he will still produce solid floor games like last week.

Adams is not playing another depleted secondary, however. He will likely see plenty of action against Cleveland’s Denzel Ward, who is PlayerProfiler’s No. 3-ranked cornerback. But as he’s proven time and time again, he is matchup-proof and will produce for fantasy gamers no matter the circumstance. Like Thanos, Adams is inevitable.

The rest of the wide receiver room, however, is tougher to ascertain. Marquez Valdes-Scantling is fresh off a big 98-yard touchdown performance on five receptions and seven targets but was placed on the reserve COVID-19 list on Tuesday. It is possible MVS can still play, however. If he is cleared to play, he would be the next fantasy option among Green Bay’s pass-catchers because of his big play ability. His 18.1 (No. 1) Average Target Distance, 35.3-percent (No. 17) Air Yards Share, and 22 (No. 11) Deep Targets are even more impressive considering he’s missed five games. It isn’t the best matchup, but as long as Aaron Rodgers is the quarterback of the Green Bay Packers, taking a flier on MVS breaking a big play or two isn’t the worst shot fantasy gamers can take. 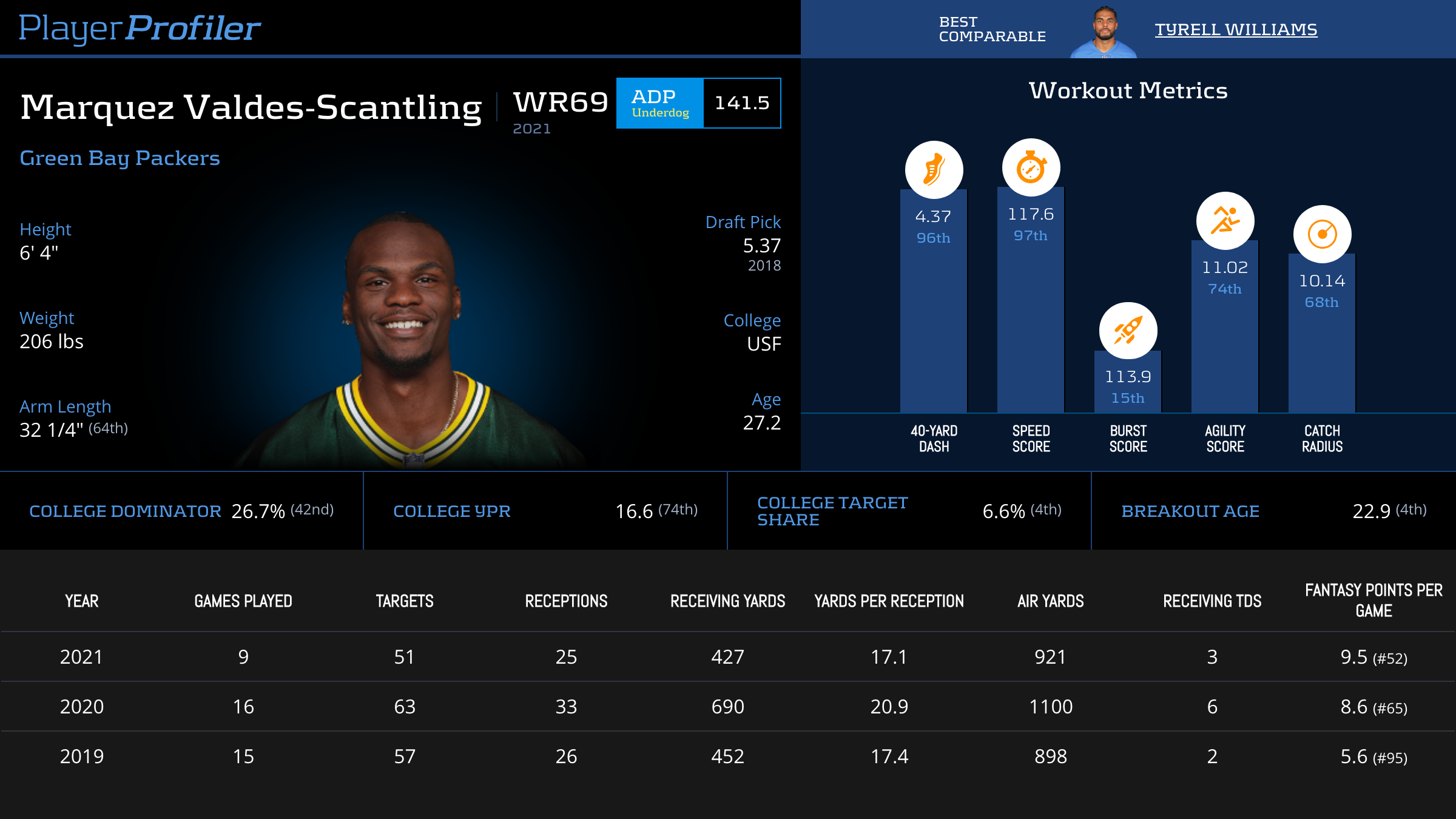 If he can’t go, Allen Lazard becomes a worthwhile play. Lazard is not the deep threat Valdes-Scantling is, but he is a security blanket for the Packers’ offense, with 11 (No. 28) Red Zone Targets. If MVS’ targets are up for grabs, that could lead to fantasy production in Lazard’s direction. Oddly enough, in the four games where he has garnered at least five targets, he’s scored a touchdown in three. That’s not to predict that he will score again this week absorbing some potential targets, but more targets from Rodgers can never hurt.

Keep an eye on what happens with Valdes-Scanting’s status. Lazard is already a passable flex play for those hoping for a touchdown, but those odds increase if more targets are up for grabs.

After Valdes-Scantling and Lazard, the pass-catching options are hard to trust. In terms of wide receivers, JuWann Winfree was the next man up, but played just 10 snaps. Malik Taylor played on a mere one snap. Equanimeous St. Brown is currently injured with a concussion. Amari Rodgers has not become a factor. These options can be ignored for now. If gamers are desperate for a tight-end option, praying for a touchdown from either Marcedes Lewis or Josiah Deguara are dart throws. Last week, Deguara ran 21 routes compared to Lewis’ six, but Deguara is the one with the growing receiving role in this offense 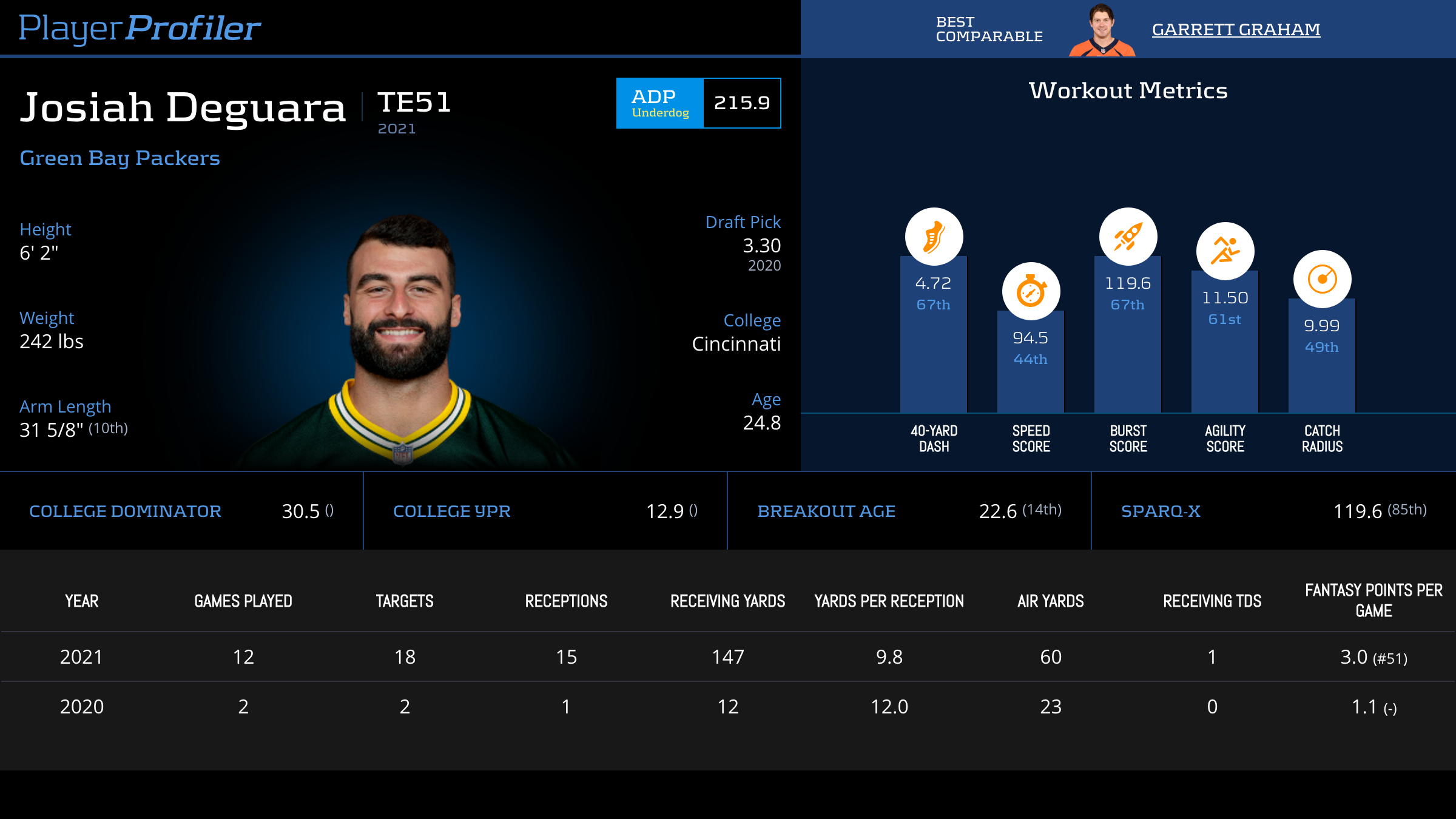 We all know Aaron Rodgers is great. It’s nice to know the numbers back that up; specifically +164.7 (No. 1) Expected Points Added, 8.3 (No. 2) Adjusted Yards Per Attempt, 31 (No. 4) Money Throws, and a 108.5 (No. 2) True Passer Rating. Most shocking is an 88.2-percent (No. 3) Protection Rate despite the entire starting group of linemen being injured. He will have his hands full with Myles Garrett and Jadeveon Clowney eagerly awaiting to pounce, but he has found a way against similarly formidable foes and still produced at his all-time level. Rodgers is one touchdown away from setting the Packers’ franchise record for touchdown throws. I see him breaking the record in dramatic fashion this weekend.

What’s better than having one great running back? Having two of them! That’s the case with this Packers backfield. Aaron Jones took back his spot on the top here last week after playing 38 of the team’s 59 snaps compared to 21 for A.J. Dillon. Jones ran 13 times for 58 yards and 15 routes. He was targeted twice and snagged both, one going for a score. Dillon ran seven times for 22 yards but punched in a touchdown at the goal line. He also ran seven routes and caught his only target. Together they total 294.2 Weighted Opportunities. For context: Najee Harris leads the position with 260. In fact: last week was the first week since Week 7 that Dillon did not register double-digit touches, and he did so the three weeks prior to that as well.

There is more than enough to go around with these two. Both are incredibly efficient; Jones and Dillon are averaging 5.2 (Jones, No. 19) and 5.1 (Dillon, No. 22) Yards Per Touch, respectively. Continue to start Jones as an RB1 and Dillon as a mid RB2 with confidence.

Summary: The Browns are broken at the moment, while the Packers are firing on all cylinders. Vegas lists the Packers as 7.5 point favorites and I’m not going to disagree with them. The Packers win this one 27-14.