The High Value Touch DFS Index is here to help you find the best plays for the dollar in DFS. This is done by looking at leaders in Carries Inside The 10-Yard Line Per Game and Targets Inside The 10-Yard Line Per Game and comparing their prices on DraftKings and FanDuel to create a rating. We weigh targets higher than carries and take it a step further to weigh it higher on DraftKings (PPR scoring) vs. FanDuel (Half PPR scoring). We look at these touches close to the end zone because touchdowns lead to fantasy points, and fantasy points lead to cashing our lineups in DFS!

I am writing this up as of 12/23/2021. The league is experiencing an outbreak in COVID. Check the news, players could be held out at any time and as we saw last week, games could get moved to other dates. Stay up to date on the latest news. If anyone listed here is out, don’t play them.

This slate is a tough one as a lot of top running back options are not on the slate such as Jonathan Taylor, Leonard Fournette, Myles Gaskin, Alvin Kamara, Aaron Jones, and Dalvin Cook. 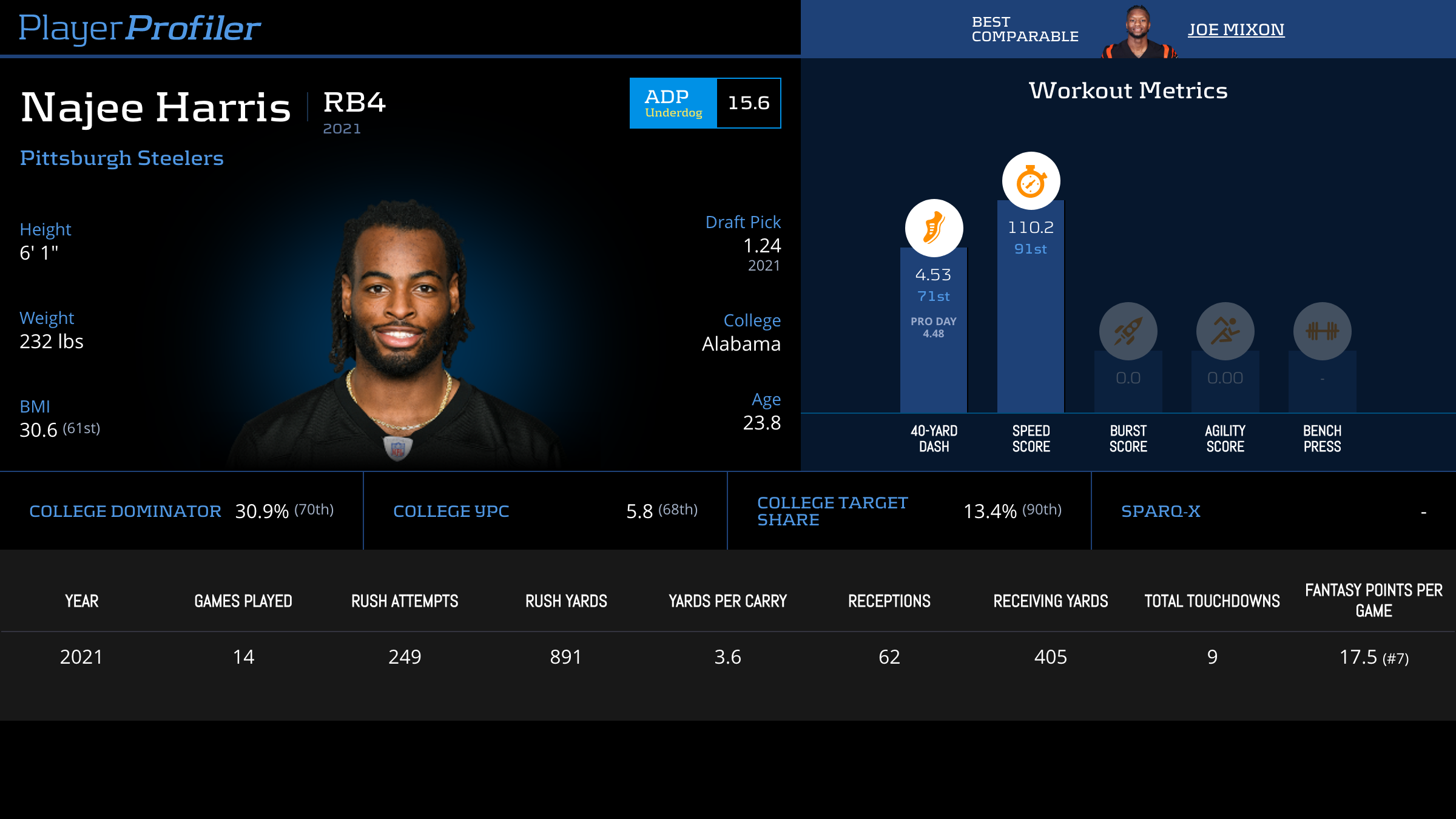 Najee Harris has gotten expensive, and it’s difficult for an expensive player to make the Top 5 here. When you remove so many running backs from the player pool, one is bound to show up. He is No. 3 among all running backs in Targets Inside The 10-Yard Line which catapults his value here. His 1.21 carries inside the 10-yard line is No. 23 among all running backs but No. 8 among running backs on the slate. There are a lot of values on this slate that makes him difficult to roster in cash but is someone I would consider in GPPs. He is a little overpriced on the slate, making him my favorite running back tournament play to get his upside at reduced ownership. 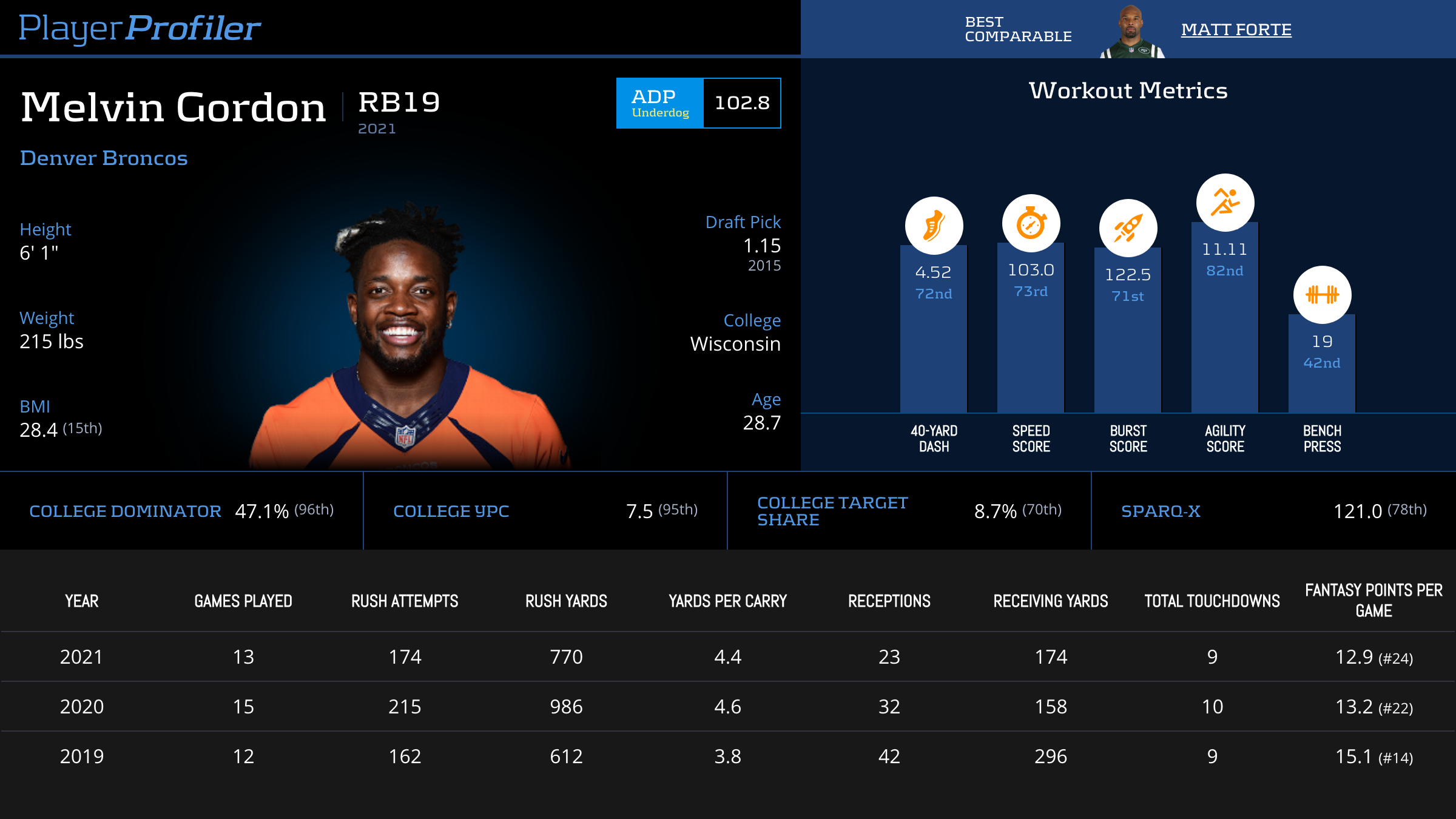 Melvin Gordon is on the list for the second consecutive week. When compared to Harris, he gets more carries per game inside the 10-yard line and is $1,600 to $2,100 less expensive depending on the site you are playing on. While he gets the majority of the carries inside the 10-yard line on the Broncos, Javonte Williams is still on the team and this offense overall is not very good. I do not want to roster Gordon, even going against the N0. 25 run defense in Las Vegas.

Jordan Howard‘s 1.6 carries inside the 10-yard line per game is No. 2 among running backs on the slate and No. 9 among all running backs. Additionally, he has had double-digit carries in every game he has played, averaging 13.2 carries per game. Looking at the game logs, he has a five to six-point floor with the possibility of scoring 12-13 fantasy points if he scores a touchdown. On DraftKings, I would consider him as a punt play if I was trying to jam in several high-priced players. Outside of that, he is someone to have in an MME GPP build.

A lot of Darrell Henderson‘s stats were when he was the lead back in the offense. With the recent emergence of Sony Michel when Henderson was hurt, it is unclear how much usage Henderson will receive going forward as he had just six carries last week to Michel’s 18. At his price, I would cross him off your player pool and look elsewhere.

Darrel Williams has not had more than five carries since November 14th when he had 11. He has not scored a touchdown since October 17th against Washington. Zack Moss and Adrian Peterson graded out higher than Williams, however Moss basically does not play anymore and Peterson has a back injury. Clyde Edwards-Helaire is the running back to roster in this backfield.

Because Darrel Williams and Darrell Henderson are unplayable this week, consider these guys to add to your player pool below

Josh Jacobs is both tournament and cash viable and Javonte Williams is tournament viable. Damien Harris has not been practicing this week.

A Word On Injured Players

Because this index is backward-looking, sometimes it misses opportunities that could present themselves. Without factoring in salary, Leonard Fournette graded out as the No. 2 running back overall. Ronald Jones is no Fournette but will be a popular play this week. Dalvin Cook was the No. 8 running back overall not accounting for salary. Alexander Mattison finds himself and a good spot and generally has done well filling in for Cook’s absence. Another potentially popular play is Justin Jackson. Austin Ekeler is the No. 10 running back overall in the index not accounting for salary, and Jackson is nearly minimum priced as well.

Similar to last week, this is a tough week to find good reliable values in the index. Najee Harris is a good tournament play, Josh Jacobs is one of the better overall plays too. In cash games, many are going to look for the fill-ins for inactive running backs such as Alexander Mattison, Ronald Jones, and Justin Jackson as well.

We will come back for Week 17 with an update to the index! Best of luck in Week 16!