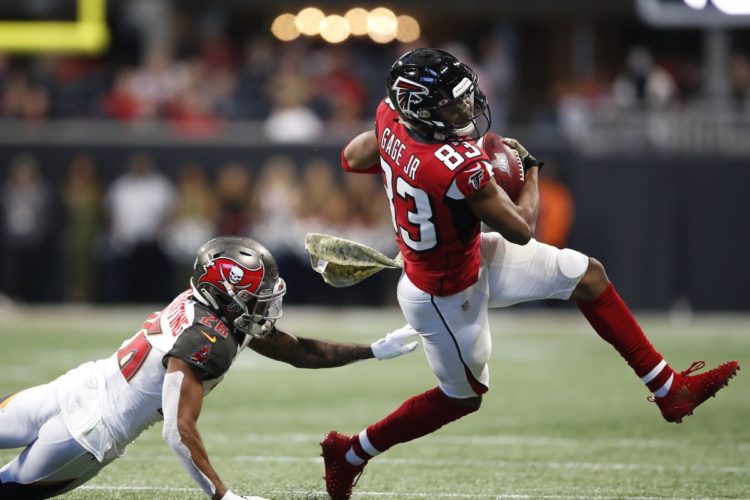 With Week 1 of the 2020 NFL season in the books, fantasy players are counting their FAAB ahead of the Tuesday night waiver wire deadline. There are few Week 1 breakouts worth targeting and no major running back injuries resulting in an emergent RB backup. It’s still early in the season and PlayerProfiler’s advanced analytics can help us get a jump on next week’s breakout stars.

Gardner Minshew impressed in his rookie season with efficiency metrics that far outperformed any projections. Among his impressive numbers, especially for a sixth-round draft pick, were an 87.3 (No. 20 among qualified quarterbacks) True Passer Rating, 4.8 (No. 5) Carries Per Game and a 71.6-percent (No. 6) Play Action Completion Percentage.

Minshew proved in Week 1 that his performance last season was no fluke. Minshew put up over 25 fantasy points with five carries and a 95-percent completion percentage, this despite throwing for fewer than 200 yards. He is a viable streamer that is worthy of a bench spot, especially given his rushing floor.

Nyheim Hines is a great PPR Flex option after going after catching all eight of his targets for 45 yards and a touchdown. Philip Rivers threw 17 total passes to running backs in typical Philip Rivers fashion.

With Marlon Mack getting injured, both Hines and Jonathan Taylor are primed for solid fantasy production going forward.

Joshua Kelley only played 18 snaps to Austin Ekeler‘s 50 in his NFL debut, but ran the ball on 12 of them. He notably also saw three carries inside the 10-yard line and converted one for a touchdown. Ekeler only saw a single goal line look. The rookie is worth a cheap stash with the Chargers looking to establish a dominant run game.

Benny Snell has Flex appeal in all formats moving forward. James Conner only needed two quarters of football to prove that he is the most fragile running back in the league. Target Snell, but don’t blow all of your FAAB on him. He has a solid rushing floor, but his Target Share is yet to be seen. News on Conner’s injury is yet to drop, but it’s unlikely to be season ending.

Malcolm Brown performed admirably as the starter is Los Angeles with Darrell Henderson playing through a hamstring injury and Cam Akers still acclimating to the NFL. Brown is not worth blowing all of your budget on, but he should continue to operate as an RB2 in fantasy for at least the next few weeks. An Akers breakout still looms on the horizon, but Brown belongs in lineups.

Jerick McKinnon had a lackluster Week 1, but the whole team was lackluster. He was bailed out by a touchdown, but his receiving usage was promising.

The skill position players are banged up in San Francisco, and Mckinnon is one of few established veterans who Garappolo can reliably target.

Peyton Barber is worthy of a zero-dollar bid if you have bench space and need a Flex option. His 1.7 Yards Per Carry mark was deplorable, but his six goal line carries were enough to warrant fantasy relevance. Antonio Gibson looms on the horizon, so temper expectation here.

Adrian Peterson looked like a 28-year old bruiser for the Lions and Kerryon Johnson is all but dust. D’Andre Swift is still being brought up to speed, so for now, Peterson has solid Flex appeal on a potent Detroit offense.

Russell Gage spent the offseason as an intriguing late-round dart throw in Best Ball after a strong finish in 2019. He erupted in Week 1, matching both Julio Jones and Calvin Ridley with 12 targets, nine receptions and over 100 receiving yards. Expect him to be the No. 1 waiver wire target this week as a result. We wouldn’t recommend blowing all of your FAAB or a top priority waiver claim on Gage, but he’s certainly worthy of a bench spot and Flex consideration.

Curtis Samuel will not be a hot target on the waiver wire despite plenty of offseason hype and speculation. Samuel’s eight targets tied him with Robby Anderson for second-most on the team behind D.J. Moore and his nine. Most people know Samuel as the guy who led the league in Unrealized Air Yards in 2019. It’s clear after Week 1 that he will retain a prominent role in this offense, and he is worth a zero-dollar bid and stash.

Samuel was stifled by poor quarterback accuracy last season, evidenced by a 5.86 (No. 105) Target Accuracy Rating. Teddy Bridgewater had a 64.7-percent completion percentage and a 75.5 QBR in his Carolina debut. Those numbers are not amazing, but they are certainly a massive step in the right direction from Kyle Allen.

The Marlon Mack injury will have a domino effect on the other Colts pass-catchers. At the wide receiver position, it was already looking good for Parris Campbell. Against the Jaguars, he tied T.Y. Hilton for the team lead at nine targets, converting six for 71 yards. Though the Colts will want to run the ball more than they managed to do so against the Jaguars, it’s good to know Campbell will be a preferred option in pass-heavy Game Scripts. He has every-week Flex upside and should be acquired if available.

Laviska Shenault‘s point total in Week 1 was not usable, but his usage was promising. Catching three of four targets for 37 yards and a touchdown while recording two carries for ten yards is exactly what Shenault truthers wanted to see. His college production showed a versatile player with upper-tier athleticism. The Jaguars had a big opening day, but still project for many negative Game Scripts. D.J. Chark is the only real competition for targets here and Gardner Minshew is for real. Shenault will be a legitimate Flex option sooner rather than later.

With Michael Thomas‘ ankle injury now expected to cost him several games, it’s time to acquire Tre’Quan Smith in all formats. The dreaded multi-week ankle injury killed the momentum of many a fantasy season in 2019, including Smith himself, though his overall efficiency remained high on only 25 (No. 120) targets. Even when Thomas returns, there’s no telling whether he’ll return to his usual form. Read your league and spend as much of your FAAB as you think you’ll need to acquire Smith as he spends the next few weeks facing off against the Raiders, Packers and Lions.

Though Mike Evans was active, he clearly wasn’t 100-percent as he gutted it out through a hamstring injury. After drawing praise from Tom Brady near the end of the summer, Scott Miller caught five of six targets for 73 yards against the Saints. The target number tied him with O.J. Howard for second on the team behind Chris Godwin. Tampa’s next game comes against a Panthers team that just gave up 34 points to the Raiders. Stash Miller on the cheap for now, before Brady begins to settle into the offense and the entire team starts putting up bigger numbers as a result.

Marquez Valdes-Scantling had a very nice day (4-96-1 on six targets), but he is the classic unpredictable deep threat. He is worth a bench stash for now, but starting him may be risky given the volatility. Add him to your bench for free if you need receiving depth.

Dallas Goedert should never have been left undrafted. If he is on your waiver wire, go get him after his nine-target, eight-catch, 101-yard, one-score performance against Washington.

The Logan Thomas breakout is upon us. Many refused to believe that Thomas could be this year’s Darren Waller due to the low probability of having two breakout tight ends in back-to-back years that came from absolutely nowhere. Thomas led the Washington Football team with eight targets and his usage was beyond promising for future success.

Add Thomas and insert him into your starting tight end slot unless you already have one of the Big Five (Travis Kelce, George Kittle, Mark Andrews, Zach Ertz, or Darren Waller) on your roster.

O.J. Howard is an interesting option in deeper formats or tight end premium leagues. He played more snaps and received more targets than Rob Gronkowski. His red zone usage is yet to be seen, but he is worth the flyer if the better options are gone and your bench is deep enough.

Chris Herndon is also worthy of a bench spot in deeper formats. Don’t roster him over Logan Thomas, but his opportunity is there. Herndon and Jamison Crowder are the only two reliable skill position players of consequence on this offense. Breshad Perriman has a role, but that’s likely as a decoy in this Adam Gase offense. Seven targets in Week 1 for Herndon is promising, but his touchdown upside is nonexistent in an anemic Jets offense.

The Eagles are already plagued with injuries and Carson Wentz was sacked eight times on Sunday. Jalen Hurts is an immediate QB2 if Wentz goes down.

Jason Huntley was a surprise cut by the Lions and landed on Philadelphia’s wide open running back roster. He is worth a flyer in the deepest of leagues, especially if Miles Sanders and Boston Scott continue to be hampered by injuries.

Brian Hill played more snaps and had more total touches than Ito Smith, while Todd Gurley did not record a workhorse-level Opportunity Share. If Gurley misses time, Hill is the guy to own.

Darnell Mooney had a quiet NFL debut, catching all three of his targets for 38 scoreless yards. Though if the talk of Allen Robinson wanting a trade is legitimate, Mooney’s 4.38 speed will be put to good and more consistent use in the offense. He’s a great player to stash for free in advance of a potential opportunity spike.

Marquez Valdes-Scantling can be rostered in deeper leagues, but is a risky start.

Tight end is deep as ever and many guys are up for grabs.

Gardner Minshew is for real.