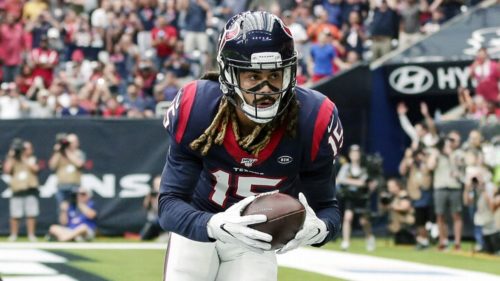 No one is selling you JuJu Smith-Schuster in dynasty for a discount because of one bad season. There was no one knocking at your door when you put Andy Isabella on the block after that one game when a defensive back lost him in the fray and he scored on one of his nine catches on the season. Buying low and selling high rarely works. Even though you might be the only player in your league using PlayerProfiler, your opponents aren’t idiots. Grow up, take some risks, and buy high or sell low.

Will Fuller is going to melt faces this year. His Week 1 performance confirmed the priors that he would be an alpha receiver on the Houston offense. He hit 123 yards of total target depth on 10 targets. He caught eight balls for 112 yards and was the only Houston receiver to catch more than three balls versus the Chiefs. Fuller was stereotyped as a downfield threat during his time playing time alongside DeAndre Hopkins, but his college resume suggests he can be a dominant receiver on his own.

Fuller posted a 46.7-percent (92nd-percentile among qualified wide receivers) College Dominator Rating at Notre Dame on the back of a 20.3 (94th-percentile) yards per receptionmark. He generated big plays at such a high rate that he became the engine of his college offense. This isn’t unheard of in the NFL either. In 2013, DeSean Jackson accounted for over 30-percent of his team’s receiving yards. His 13.1 average target depth was 10th among players with more than 50 targets. The Eagles ran their offense through a burner and finished the year fourth in total points. Mike Wallace, Fuller’s best comparable player, filled the same role in Pittsburgh nearly a decade ago. Buy Fuller before he hits 150 yards or scores multiple times in a game. He’s a WR1 going forward and paying anything less is a steal.

The Mustache is back for 2020. Gardner Minshew came out and stunned the Colts in Week 1. He completed 19 of 20 passes, his 95-percent completion rate being the fourth-best in a single game ever. He only went for 173 yards, but he scored three times through the air, adding five carries for 19 yards. This shouldn’t be a shocking outcome. Minshew threw for 4,779 yards while posting a 68th-percentile College QBR in his lone season at Washington State. Now he has D.J. Chark and Laviska Shenault to work with.

Minshew draws a solid Titans defense next week, but then he gets the Dolphins, Bengals, Texans, and Lions. Those four teams were among the seven worst at stopping opposing quarterbacks from scoring fantasy points last year. Minshew is a solid passer with rushing upside–he went for 344 yards on the ground (No. 5) last year–and he’s about to get on a tear of easy opponents. Pick him up in season-long and buy him as a borderline QB1 in regular or SuperFlex leagues.

That didn’t take long. It only took a handful of drives for J.K. Dobbins to ruin Mark Ingram‘s fantasy value. Ingram carried the ball 10 times for 29 yards. He did not score and did not see a target. The Ravens called two run plays inside the five-yard-line and Dobbins got both totes. Ingram saw one red zone carry and Lamar Jackson got one as well. Ingram scored 15 times on 228 touches in 2019. That was unsustainable before the addition of Dobbins. Now he’s fighting both regression and Dobbins in an uphill battle.

Dobbins is already eating away at Ingram’s touchdown production, and the carries between the 20s are soon to follow. In his final season at Ohio State, Dobbins carried the ball 301 times for 2,003 yards, good for a 6.7 (87th-percentile) Yards per Carry mark. That gave him a 28.4-percent (63rd-percentile) College Dominator Rating. With second-round draft capital backing him, Dobbins is set to relegate Ingram in the coming weeks. Take any RB2 or an upside RB3 for Ingram at this point.

Hayden Hurst entered the NFL as a horrible college prospect. He posted a 23.0 (4th-percentile) Breakout Age, but his extra years of experience did not lead to increased dominance. He posted a 15.6-percent (43rd-percentile) College Dominator Rating with 12.7 (49th-percentile) yards per reception at South Carolina. Then he left the Combine with a 34th-percentile SPARQ-x score. He was a Day 3 prospect who Baltimore made a galaxy brain pick on that backfired almost immediately. They sold low on him by moving him to Atlanta for a second-round pick after two uneventful seasons.

In Week 1, Hurst took a backseat to all three of the top receivers in Atlanta:

Hurst only drew five targets, the same number as Todd Gurley. Both earned a 9.8-percent Target Share. That isn’t going to cut it for Hurst to post fantasy TE1 numbers. He has never been a special player and this performance shows that he’s certainly not capable of getting his in an offense stacked with pass-catching options. See if the person who has Logan Thomas will let you buy high with Hurst as a bargaining chip.