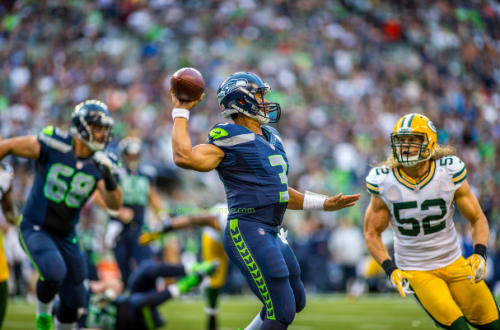 In the words of the heroic Scott Hanson: “Football… Football!”

It was a triumphant return to NFL Sunday, and outside of the empty stadium shots, it felt about as real as it could. Star quarterbacks showed out, freshly paid running backs scored fantasy points in buckets, and several rookies made emphatic marks on their first days out. Let’s take a look at what we learned this week through the lens of PlayerProfiler’s advanced stats, metrics, and analytics. Thanks for coming along.

The NFL’s highly anticipated return brought along the return of confirming priors. Not a podcast this offseason left Clyde Edwards-Helaire‘s upside undiscussed. He performed as well as his bannermen could’ve hoped for in his coming out party, leaving few strings for detractors to yank on. While some will knock him for his failed goal-line rushing attempts, the fact that the rookie garnered as much opportunity as he did at every juncture of the Game Script is the more important take-away.

Clyde Edwards-Helaire made the most of his opportunities by taking advantage of the Texans when they featured a light box at snap (6-or-fewer defenders).

Edwards-Helaire received 25 carries throughout a game where the Chiefs could’ve kneeled on the ball starting in the third quarter. That gave us plenty of information about who the backfield focal point of the league’s most explosive offense will be. Darrel Williams shares are drawing dead after seven rushing attempts in this blowout. While our sample size data is small, and while the Chiefs faced an awful defense, the hope that Williams will be anything more than an insurance policy for Edwards-Helaire is grim. If this level of usage for CEH holds, and if his receiving prowess begins to become a factor, we’re looking at a fantasy sledgehammer.

Action: There’s no action on this one. If you missed out on CEH, better luck next year. However, we can instead cover the good news for Will Fuller enthusiasts. Fuller’s 10-target, eight-catch, 112-yard night was a dream start for one of the offseason’s most upside-infused prospects. He saw work at every level of the field, and his step into Houston’s WR1 role will be a massive boon to both he and Deshaun Watson‘s fantasy value. Listen, I already know what you’re about to say, but scared money don’t make money. He’s not injured right now, so let’s ride.

Philip Rivers acted as reverse Jacoby Brissett in his Colts debut, tossing one score and two back-breaking picks in a game that, on paper, should’ve been a Colts smash. Out of 46 pass attempts for Rivers, 17 went to running backs. Three of those went to to Marlon Mack, who later exited the game with what has now been confirmed as a torn Achilles. With Mack done for the season, both Jonathan Taylor and Nyheim Hines now hold starter value. We know about Rivers’ propensity toward targeting running backs, and both of these backs are plus receivers with the requisite explosion and shimmy to add yards after the catch.

Taylor’s receiving work was all we needed to see in terms of his sky-high upside. Especially now that he’ll absorb a large portion of the workload of a player who was top 10 in carries last season on the league’s fifth-most run heavy offense. Hines’ goal line work feels more like an aberration than the new normal, while Taylor looks primed for an impressive rookie season from here on out.

Action: Hines will be among the most coveted waiver wire adds out of the gate. If available, he absolutely warrants a healthy amount of FAAB as a player that will be involved in multiple phases of the Colts offense. Taylor will likely overtake more and more of the backfield work, but Hines is a great Flex add. Taylor will be a DFS smash next week against a Vikings team that ceded more than 150 yards on the ground to the Packers.

Aaron Rodgers has had an uneven go of things with coach Matt LaFleur thus far, but not in Week 1. It was the best Rodgers has looked in a while, rolling up 364 yards and four touchdowns against a decimated Vikings defense. It was a far cry from the 20.7 total fantasy points he mustered in two games against Minnesota last year.

Davante Adams was, unsurprisingly, the main beneficiary (14-156-2), and he is on pace to lead the league in targets. The surprising beneficiary, however, was ol’ Marquez Valdes-Scantling, who was second on the team in targets. He out-targeted offseason darling Allen Lazard six to four, and was trusted by Rodgers on contested catch situations. Again, we’re working on a one-game sample, but Valdes-Scantling has one leg out of the coffin after Sunday’s performance. If Rodgers keeps up this level of play, MVS can be a flex-worthy player all year long.

Action: MVS is a worthy waiver wire add. Next week, the Packers draw a beatable Lions secondary that was just knocked off by a prolific (checks notes) Mitchell Trubisky performance. Also, if A.J. Dillon happens to get dropped in your redraft league after a lackluster debut, snap him up. His spike weeks will come.

This is a red alert. Russell Wilson threw the ball 35 times on Sunday. That only happened six times last season, and this was in a game where the Seahawks were never behind. Wilson has historically been a top 5-efficient QB by basically any metric; True Passer Rating, Fantasy Points per Dropback, etc. Consistent volume has been the only missing piece. Atlanta’s defense is always easy to pick on, but Wilson looked immaculate, throwing as many touchdowns as he did incompletions.

D.K. Metcalf and Tyler Lockett continued their co-dominance, with eight targets and 90-plus yards apiece. Metcalf beat Isaiah Oliver for a 38-yard score on fourth down early in the third quarter, and the Seahawks never looked back. No player logged more than seven carries given the team’s ease of success in the passing game, but Chris Carson salvaged his day with two receiving scores from Mr. Unlimited.

Action: Wilson carries as high a ceiling as any QB in football when he’s unleashed. While he is off the main DFS slate next week against the Patriots, he’s a top-5 QB in any format. Buy the dip with Chris Carson, who will be the fantasy RB1 in this backfield.

Lesson Five: Joe Burrow’s Up and Down Opener

Joe Burrow had a slow start to his pro career in a slobberknocker of a game against the Chargers. Outside of his 23-yard rushing touchdown, neither offense was particularly exciting. A.J. Green led the Bengals with nine targets, with four players tied at five behind him.

While Burrow completed only 23 of 46 passes for 193 yards and a pick, he showed promise in the ways you’d want your franchise player to do. The Chargers defense is still strong sans Derwin James, and when Burrow suffered his first pick in the NFL, he responded by completing eight of 11 passes on a 70-yard drive that set the team up for overtime. Burrow actually tossed a game-winning score, but a pass interference call negated it.  A missed field goal then ended the comeback attempt. Joe Cool will be fine, and his rushing upside was on full display in the opener.

Action: Fire up your Bengals on Thursday Night Football. The Browns looked like the worst team in the NFL in Week 1, especially concerning given the talent they have on both sides of the ball. Burrow and company should have an easier time of things on TNF, while Joe Mixon and Tyler Boyd should have some bounce-back performances after middling debuts.