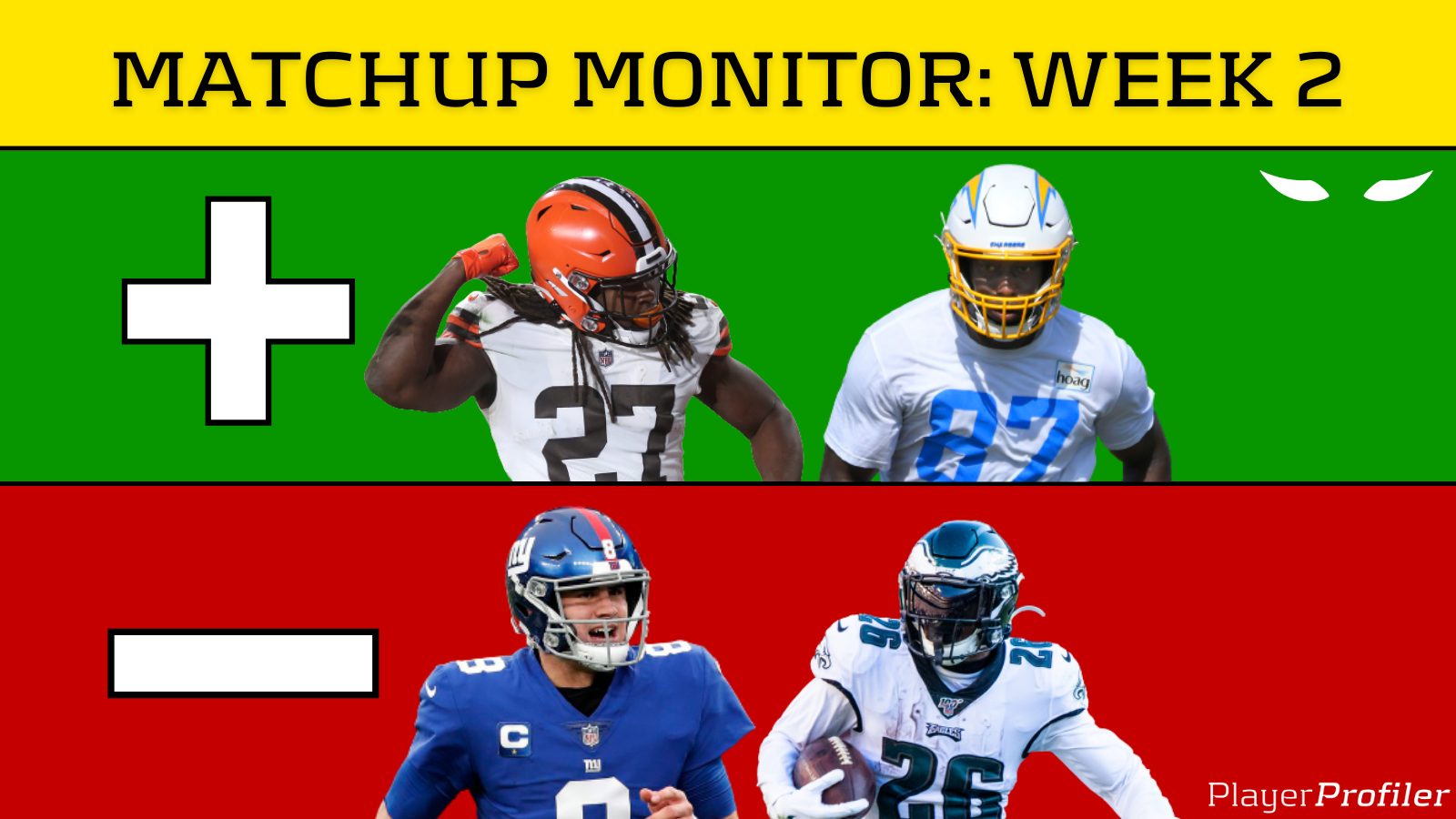 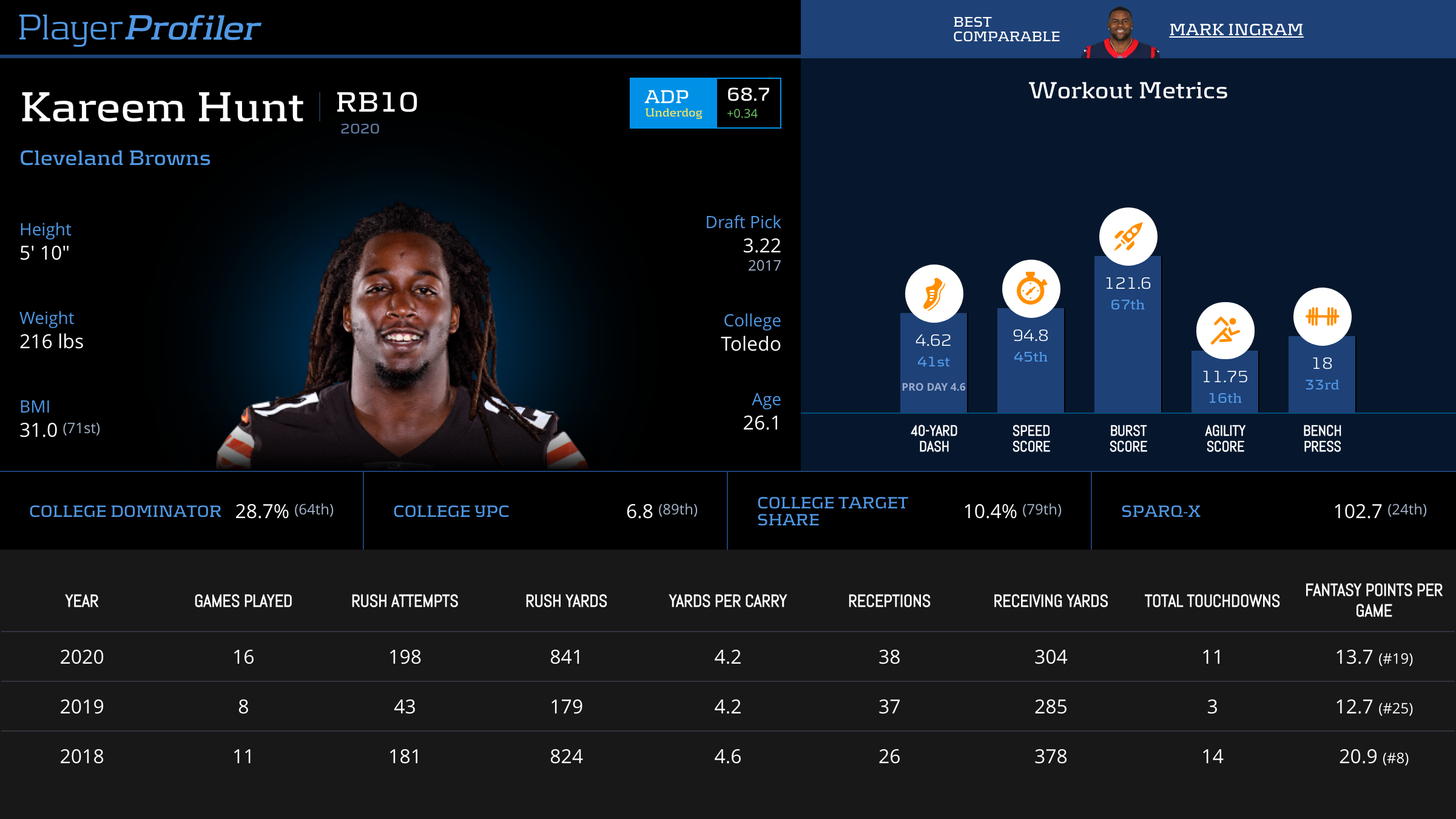 We know that Kareem Hunt is the clear RB2 behind Nick Chubb in Cleveland. Yet, the Browns offense is potent enough for everyone to eat. In Week 2 against the Texans, Chubb is most definitely a fantasy starter, but Hunt will get carries, and more importantly for PPR, targets. Last season, Hunt ran 245 (No. 16 among qualified running backs) routes as Cleveland’s “backup.” After three receptions against the Chiefs, he projects to continue getting receiving opportunities.

Are Nick Chubb and Kareem Hunt the best RB Duo in the NFL? 💪 pic.twitter.com/a0pzgubtYE

Houston’s defense lacks playmakers, and with the secondary engaged with a good WR corps, Hunt will get opportunity underneath. He could see targets similar to the shallow targets Laviska Shenault saw in Week 1 against Houston. In a game where Cleveland will score big, Hunt has the opportunity to put up fantasy starter numbers. 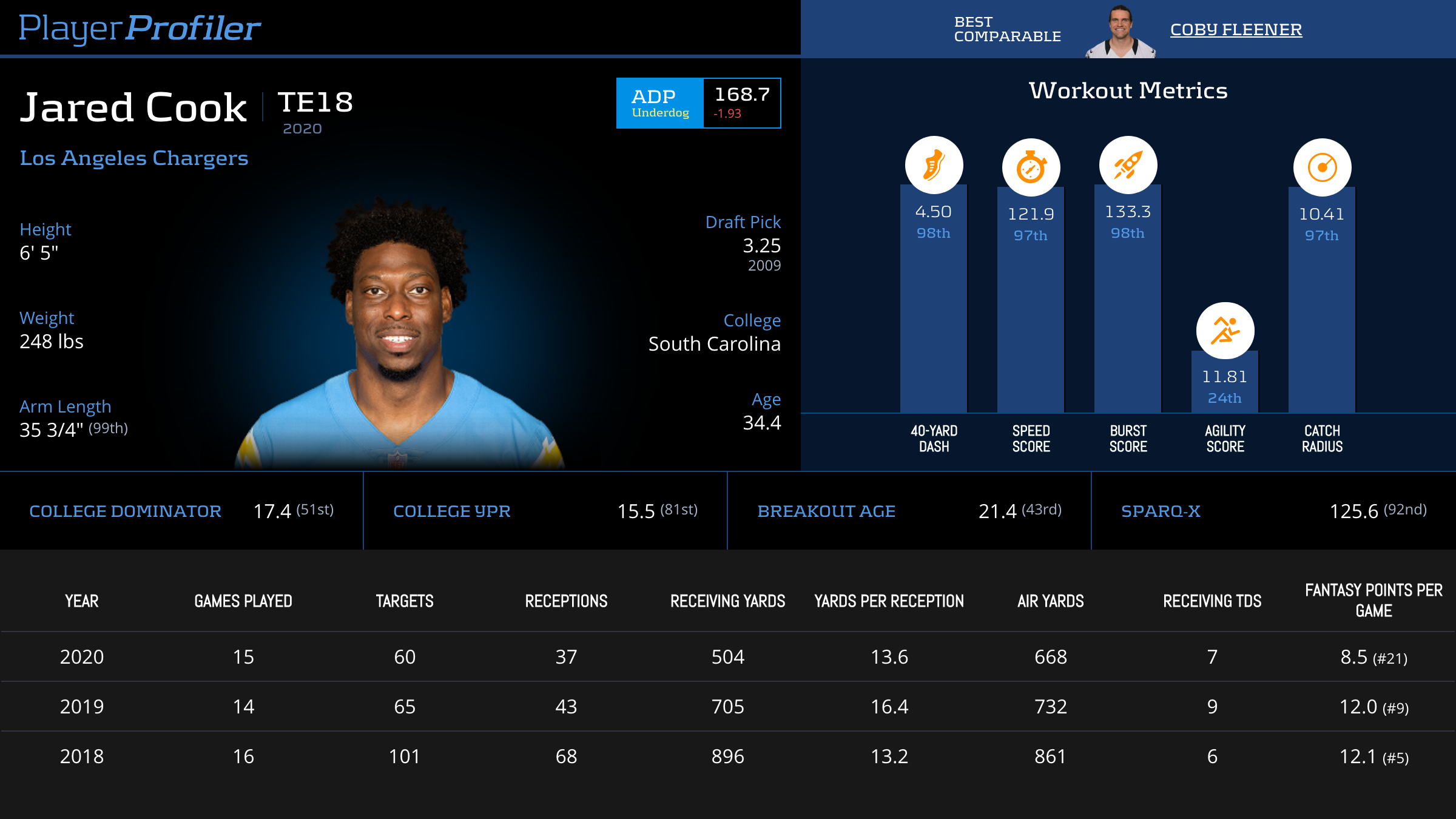 Rob Gronkowski caught 8 receptions for 90 yards and 2 touchdowns against the Cowboys Week 1. Yes, Gronk is a Hall of Famer, but it’s hard to ignore how porous the Cowboys pass defense is. Behind Justin Herbert and Keenan Allen, TE Jared Cook is in line for a big game. Cook ranks 97th-percentile or higher in Speed Score, Burst Score, and Catch Radius, with a 99th-percentile arm length. He has a streak of four straight seasons with 500-plus receiving yards and caught 5 passes for 56 yards in Week 1.

The Cowboys allowed 379 passing yards to the Buccaneers and the secondary did not look great. Cook is in for a great game this week as the third option in the Chargers passing game. 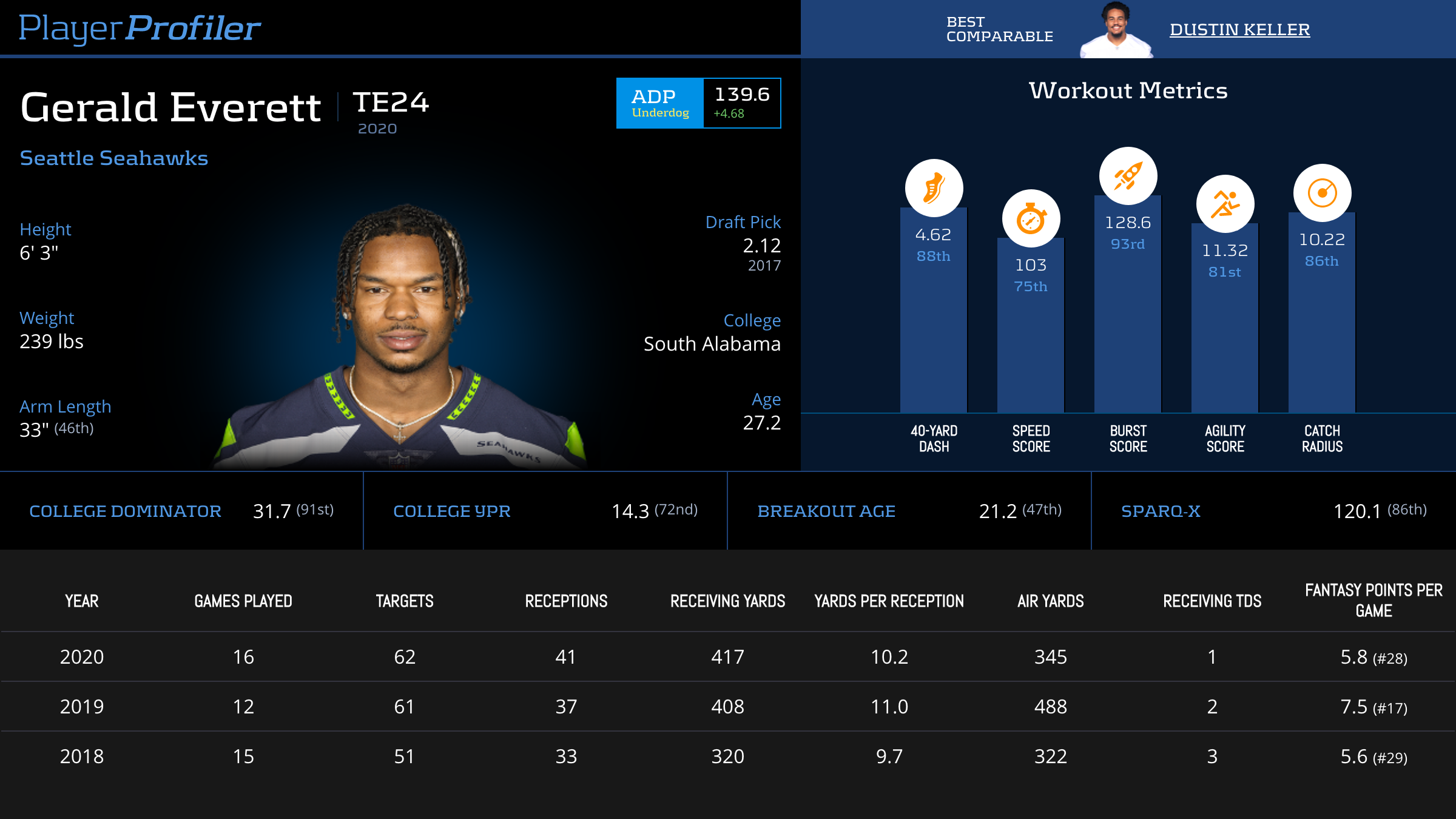 Last season, Gerald Everett achieved a 93.2-percent (No. 5) True Catch Rate and a 100-percent (No. 1) Contested Catch Rate (albeit, on 5 targets). His consistent hands will be useful for Russell Wilson, who will cook against this Titans defense. The Titans allowed 289 passing yards and 4 passing touchdowns in Week 1. They struggled to stop the ball through the air and will have their hands full with the Seahawks receiving corps. Kyler Murray evaded tacklers to launch the ball, and Russell Wilson is not any different, he will attempt plenty of passes. Everett is arguably the top receiving option after D.K. Metcalf and Tyler Lockett. And while Will Dissly is a factor, Everett is more athletic and profiles as a better red zone target. Everett is in a good spot to outproduce his average input in Week 2. 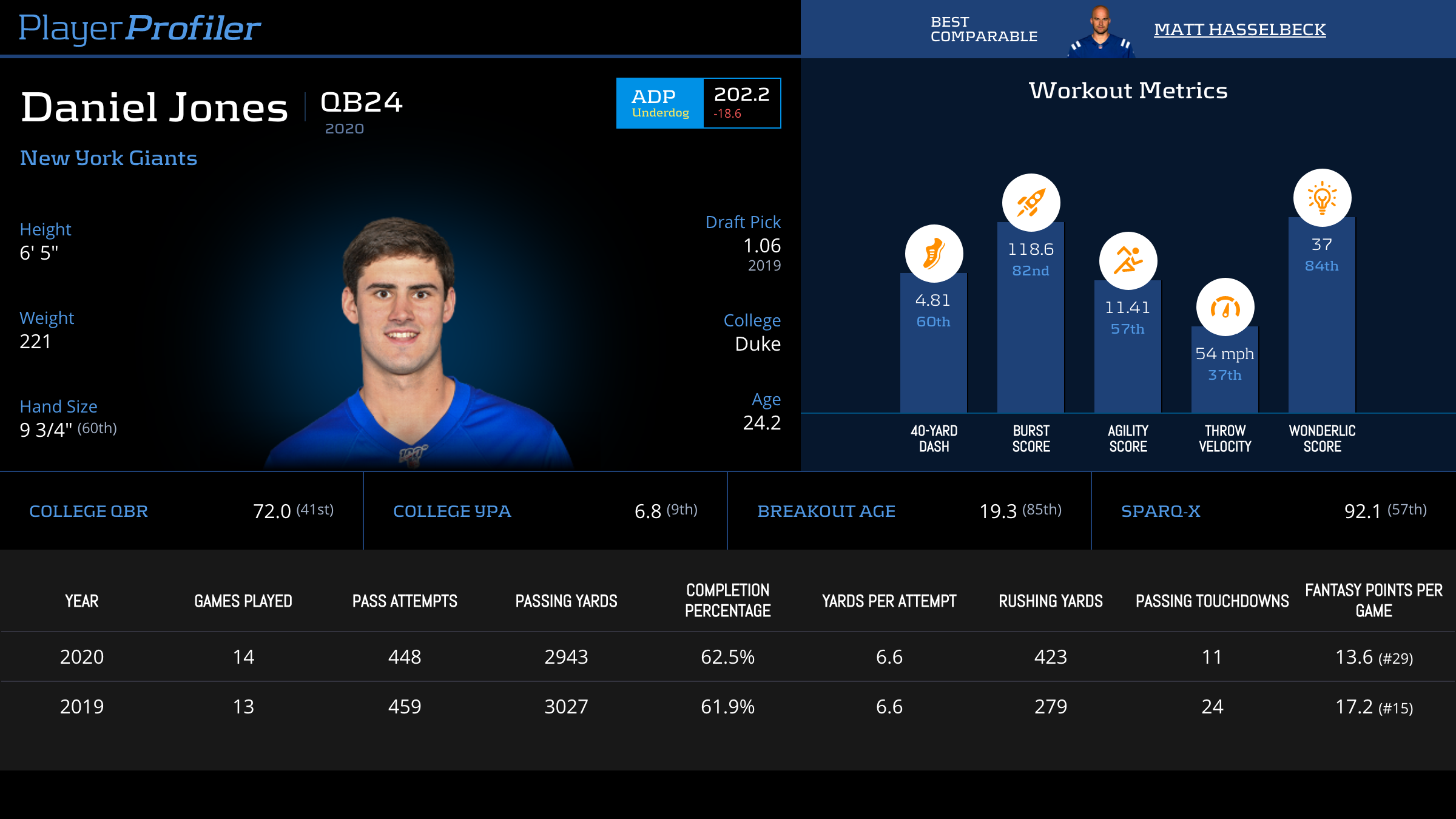 Washington’s defensive line is imposing and aggressive. Chase Young leads a group that had 2 sacks, 5 QB hits, and a forced fumble in Week 1. Young himself achieved 3 (No. 4) forced fumbles and 5 (No. 7) tackles for loss last season. Meanwhile, Daniel Jones has not had a season with a completion percentage over 63.0-percent. He had 38 (No. 5) Danger Plays last season and is very fumble prone. The Giants offensive line also struggled in Week 1 and will struggle again against an excellent Washington defensive line. Do not expect Jones to put up fantasy-useful numbers in Week 2. 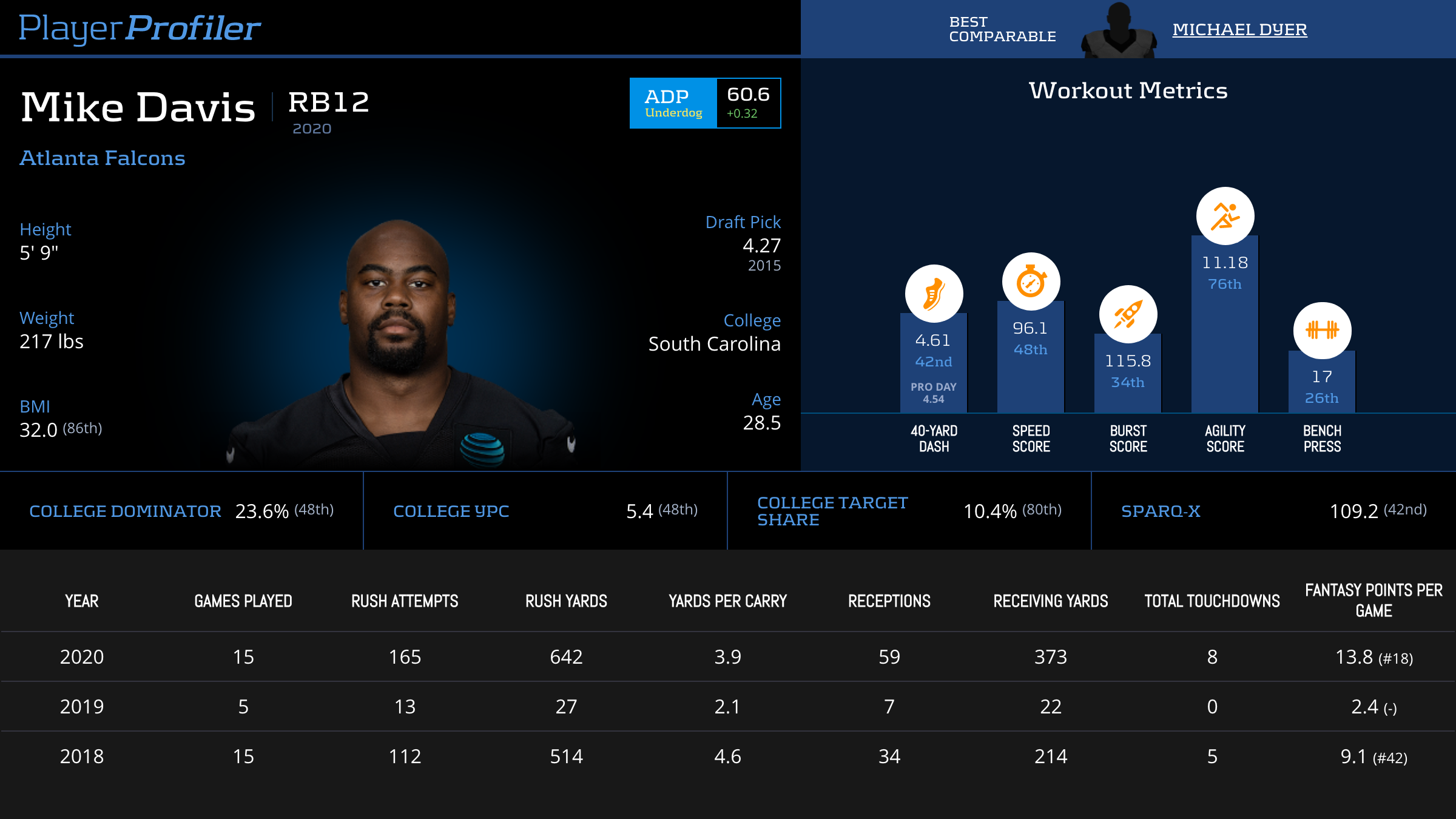 The Atlanta Falcons are going up against the defending Super Bowl champs in Week 2. While you may expect offense in this game, avoid Mike Davis. He measures at 5-9, with a 96.1 (48th-percentile) Speed Score. He has also averaged more than 4.0 yards per carry in just one season in his career. The Tampa Bay defensive line is imposing, led by 6-4, 347-pound Vita Vea. They held Ezekiel Elliott to just 3 yards per carry in week 1.

.@Buccaneers @VitaVea played 54 impactful snaps; although don’t read the stat page for how well he played and how he impacted the game. Straight Polynesian Power. No one man can stop his force. #BaldysBreakdowns pic.twitter.com/k09tQXFcZU

Tampa Tom and the wide receivers will be raking against the Falcons defense, leading to a deep pass-heavy Matt Ryan day. Davis will not see deep targets. You should not expect a big productive day from him against a stout Tampa defensive line. 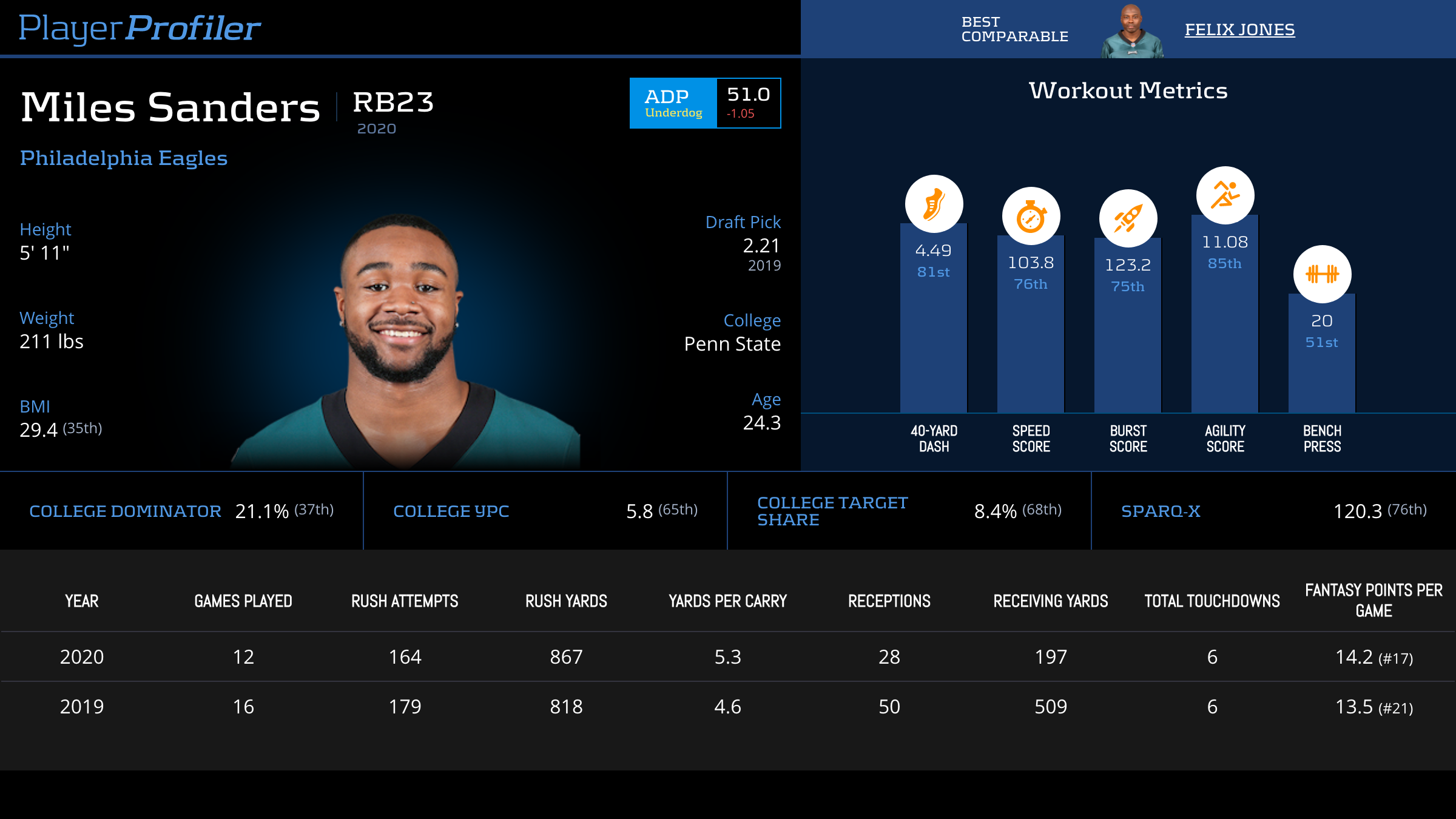 In Week 1, Miles Sanders saw 19 touches, with Kenneth Gainwell seeing 11 touches. While Sanders did have a good fantasy game, Gainwell is certainly eating into some of that workload. The 49ers defensive line had an OK game against the Lions, but will continue to improve with Nick Bosa back in the lineup post-injury. Without Bosa, the 49ers still allowed the sixth-fewest yards per carry last season. The Eagles had an excellent offensive game against Atlanta, but the 49ers are a better team, and Game Script may not favor Sanders as much this time around. While you may have to start him anyway, he has a lesser chance of reaching his fantasy potential against the 49ers.