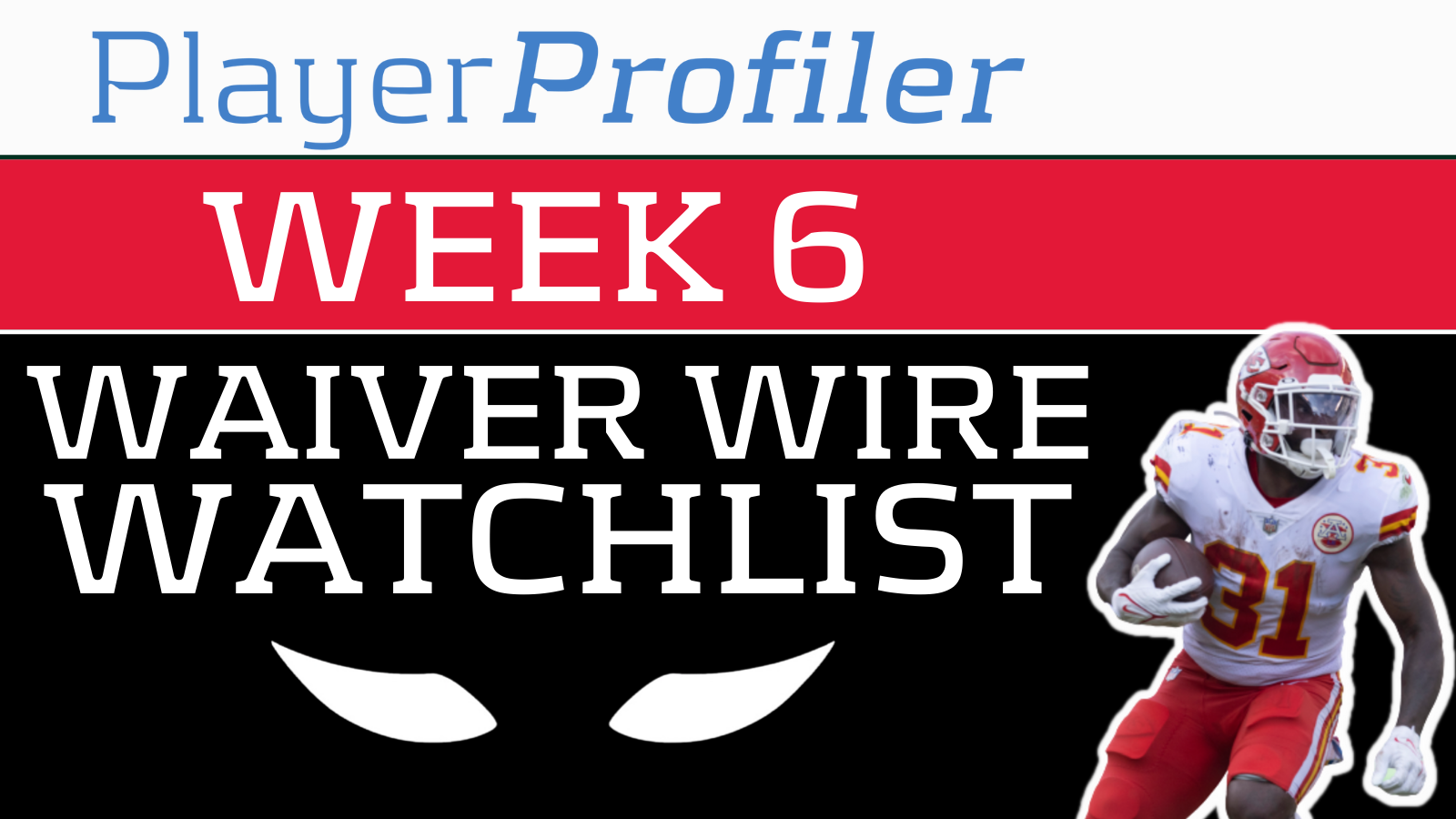 The theme of 2021 may as well be “rolling with the punches.” The injuries keep on coming this season in the NFL. Fantasy players had to deal with the constant headaches all week of players who drew the dreaded “questionable” tag. David Montgomery was sent to the IR. Chris Carson was ruled out Thursday night. George Kittle was placed on the IR. Dalvin Cook sat out on Sunday and his handcuff Alexander Mattison posted an RB1 outing. Joe Mixon and T.J. Hockenson played and both had regrettable outings (Mixon was somewhat saved by a TD late).

Cook may miss another game. There is also a whole new list of injuries. Saquon Barkley went down with an ankle injury that will keep him out multiple weeks. Russell Wilson will miss at least four weeks. Clyde Edwards-Helaire went down with an MCL strain. Kenny Golladay (a few weeks) and Juju Smith Schuster (season). Justin Fields, Daniel Jones, and Trey Lance are all dealing with knocks. Woof.

We now also have to deal with the dreaded bye weeks. Week 6 will be our first set of them. Atlanta, The New York Jets, New Orleans and San Francisco will all take the week off. Week 7 becomes even harder to deal with Buffalo, Dallas, Jacksonville, Los Angeles Chargers, Minnesota, and Pittsburgh all on byes.

If you have been using Dak Prescott, Justin Herbert, or Josh Allen as your QB this year, consider adding a QB this week so you are not spending up next week.

Here are some lower-rostered streaming options that should be widely available over the next two weeks if you need them.

Be a step ahead with bye weeks and plan around them. Scrambling last minute will not only hurt your process, but it could lead to you adding players who will not help you, and potentially cutting players, you are better off keeping.

Taylor Heinicke put up a fantasy dud week in Week 5, but he could be highly valuable as a bye week streamer with so many players out on byes over the next two games. He has a star WR1 in Terry McLaurin, and Washington should have positive Game Scripts in potential shootouts (especially at home against Kansas City). If Ryan Fitzpatrick comes back from injury, he would be right on the radar as a streamer.

Teddy Bridgewater has a plus matchup against a Raiders team coming off of a loss AND just lost their head coach. He can be used as a streamer this week.

Devontae Booker should draw a few starts while Saquon Barkley deals with an ankle injury. Booker filled in well this past week when Barkley left the game, finishing with 58 yards rushing and a TD. Expect high-volume touches for as long as Barkley is out. He certainly meets the criteria if you are a “pay for touches” type with your FAAB bidding.

Jerick McKinnon will see some work, but Darrell Williams is the back to roster in Kansas City now that Clyde Edwards-Helaire is out for multiple weeks. Williams will see the early down and goal line work, and he has the familiarity with the coaching staff.

Khalil Herbert saw almost equal volume to Damien Williams in the first Bears game without David Montgomery. Williams found the end zone, but Herbert showed a lot of juice. The Bears are leaning on their ground game, and Herbert could be a useful depth/bye week fill-in player.

Khalil Herbert out snapped Damien Williams 24-10 and had 15 opportunities (targets + carries) to 6 for Williams. looked better on tape throughout the game. Go pick him up if you need running back depth. #TeddysTake

Sony Michel found the end zone this past week. Darrell Henderson is clearly the top of the food chain right now for the Rams RBs, but Michel should be viewed as a high-end handcuff who will sees weekly touches in one of the better offenses in the league. If he is available, roster him.

Damien Harris fumbled at the goal line and suffered a chest injury. The extent of Harris’ injury is unknown, but Rhamondre Stevenson is on the rise in New England regardless. We all saw how productive Stevenson was in the preseason. He is a rare big back with two-way ability. The Patriots offense is desperate for a spark and Stevenson could be it.

We have had a lot of hits in this waiver wire column this season, but Kadarius Toney was one of the biggest misses. Toney looks explosive and dynamic every time he touches the ball, and sees enough target volume to be used as a flex play or more. The first-round draft pick looks like a fantasy steal, especially in dynasty where he slid down boards. Toney is easily the top WR add this week.

A weekly reminder that Rashod Bateman is coming off of the IR and should be rostered. We have already seen Ja’Marr Chase, Rondale Moore, Kyle Pitts, and Kadarius Toney all produce in the early season. Bateman could very well be the next rookie pass-catcher to make an impact and find his way into our fantasy lineups.

I have to write about Chef Renfrow every week in this column. He continues to produce with yet another usable day this past weekend with six catches on eight targets. Hunter Renfrow is a low-ceiling option, but he can be viewed as a WR3, especially during the bye weeks. The Renfrow-Derek Carr connection is a thing.

Much like Hunter Renfrow, Tim Patrick has been discussed multiple times in this column as a player to add. Patrick is very much on the Flex radar this week against Las Vegas.

Quintez Cephus suffered an injury, and Amon-Ra St. Brown should see an uptick in usage. The rookie had eight targets this past weekend and could be a player on the rise.

toney’s the crown jewel of the rookie pickups this week, but amon-ra ain’t a bad timepiece consolation https://t.co/LoJi5XKpXg

Jacksonville traded for Dan Arnold, and he has immediately become a big part of their offense. This past weekend, he caught six passes on eight targets. Arnold is a strong addition this week and looks to be an ascending player in Jacksonville.

David Njoku is coming off an incredible seven-catch, 149-yard and a TD performance in Cleveland’s shootout loss to the Los Angeles Chargers. Njoku saw 10 targets. This game is most likely a one-off, but he should be added this week on the chance that he sees increased usage based on production.

David Njoku has done this while running a route on only 44% of passing plays (so far).

Meanwhile, Odell Beckham Jr. has been on the field for 84% and can’t buy a look.

Ricky Seals-Jones saw similar usage to the injured Logan Thomas in terms of routes run and snaps played. He caught five passes this past weekend. Seals-Jones has streaming appeal this week, as Washington looks to keep up with the high-flying Chiefs.

Just getting this on the record now…

Ricky Seals-Jones played 99% of the snaps, drew 8 targets and ran 42 routes in relief of the Pride of Lynchburg, VA Logan Thomas in Week 5. Now he gets a #RevengeGame against the Chiefs this week and their defense is ass.