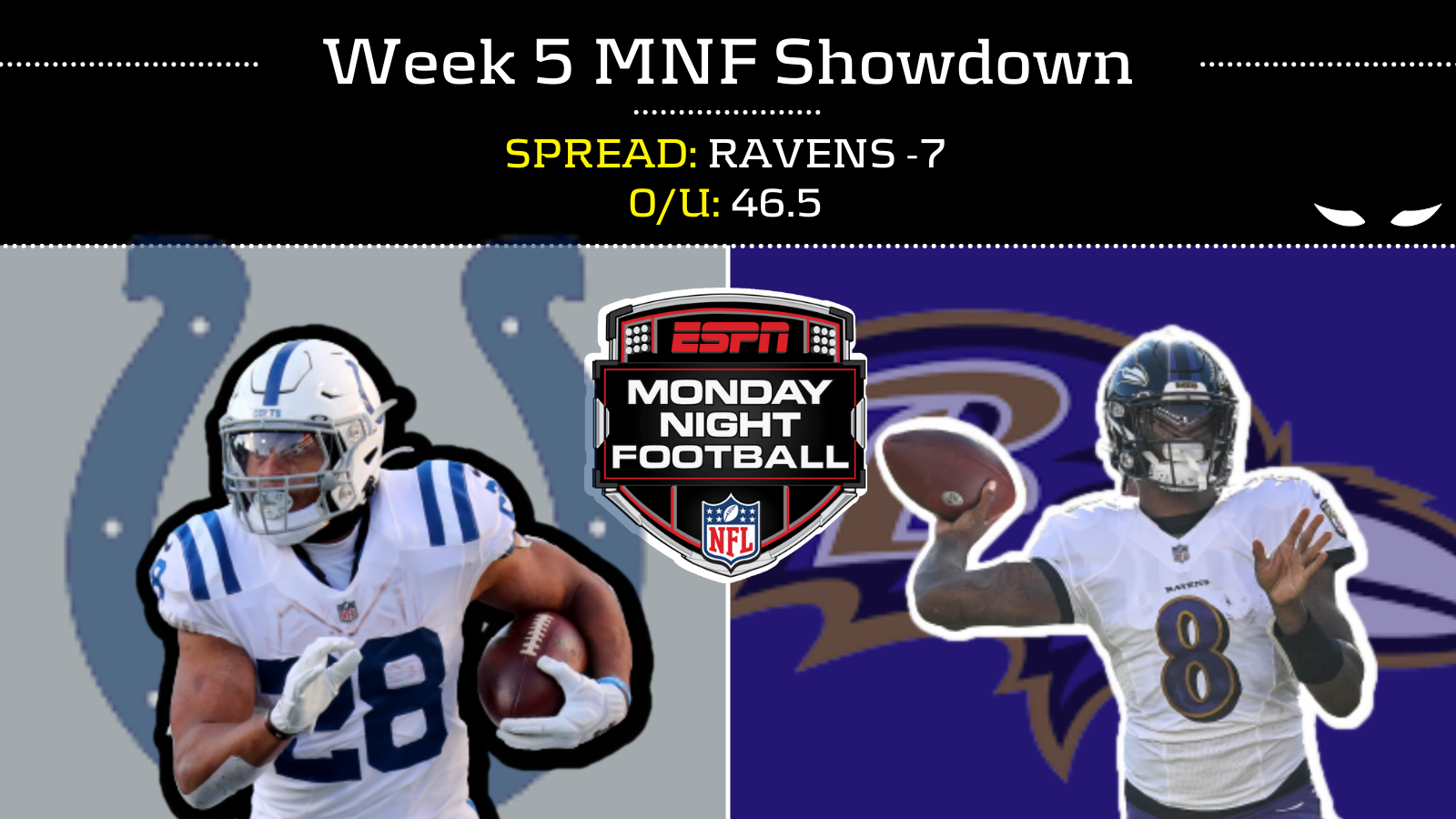 Welcome to the newest edition of Monday Night Showdown. I have officially taken over for the Salary Cap-tain, who is putting in the work on the Underworld social platforms, and now I’ll be guiding you through the important aspects to watch in every Thursday AND Monday night matchup.

Without further ado, let’s what the Colts and Ravens have in store for us this week.

Carson Wentz comes into today without an injury designation, so both ankles should be 100-percent ready to go against the Ravens bottom-10 pass defense. The Colts’ offense has been sluggish, with Wentz only crossing 250 passing yards twice. Game Script doesn’t seem to matter for this team. Wentz will throw somewhere between 30-40 passes and rack up his weekly 18 fantasy points. He’s a top 20 option with minimal upside.

Despite earning less touches than expected, Jonathan Taylor has still received 56.8 (No. 11) Weighted Opportunities, which is a respectable count. Despite a -3.35 (No. 23) Game Script, the Colts are dedicated to feeding Taylor, due to the fact that he’s one of the most efficient backs in the league. He checks in with 51 (No. 2) Evaded Tackles, a 73.9-percent (No. 1) Juke Rate, and 4 (No. 8) Yards Created Per Touch. Taylor faces a tough matchup in Baltimore, but he’s a start nonetheless.

In both games where the Colts played catch-up, Nyheim Hines finished as a top-15 RB in PPR leagues. He’s heavily involved in the passing game, shown by his 13.1-percent (No. 11) Target Share and 6 (No. 10) Slot Snaps. There is risk baked into Hines, as he’s been phased out in close games. Based on the projected Game Script, this would be a week to play him. He’s a risky flex if you have to play him, but he’s also an intriguing DFS play to go against the Jonathan Taylor chalk play.

Michael Pittman, the No. 1 WR in this offense, draws a tough matchup against No. 11-ranked cornerback Marlon Humphrey. Pittman has had a decent start to the season, with three straight games of six-plus receptions. Yet, despite 6 (No. 7) Red Zone Targets, has failed to find the end zone. His efficiency metrics are average, but the opportunity for him is there. He has a 99.3-percent (No. 3) Route Participation and a 26.3-percent (No. 17) Target Share. Pittman has flex appeal, despite the tough matchup, in a game where Indy will have to throw to win.

The other receiving options have a dismal outlook. Zach Pascal‘s only bright spot is his 9 (No. 1) Red Zone Targets. He’s touchdown dependent, and even then carries bountiful risk. Parris Campbell has failed to break through, earning a dreary 9.7-percent (No. 92) Target Share and 3 targets per game. Both Pascal and Campbell have good cornerback matchups, but cannot be trusted in fantasy.

Lamar Jackson And His Playmakers

Lamar Jackson faces off against a top 10 passing defense, but one that has also given up 11 (T-No. 1) passing touchdowns. Jackson hasn’t been the fantasy game-breaker that he’s previously proved to be, but that’s due to a lack of touchdowns. He comes in with only 1 passing and .5 rushing touchdowns per game. Still, Jackson averages 69.8 rushing yards per game and has been efficient through the air. Jackson will carve up the Colts defense, who are missing Kwity Paye and Rock Ya-Sin tonight.

Lamar Jackson is a SCREAMING BUY in redraft

Lamar is averaging 23 fantasy ppg despite this, and Rashod Bateman is now practicing…

Trade for him before he goes BOOM on Monday Night Football against the Colts pic.twitter.com/Bh3reNXrvm

The true alpha of the passing game has always been Mark Andrews. Mandrews has three straight games of five-plus targets and 50-plus yards. He dominates opportunity in Baltimore, with a 13-percent (No. 14) Hog Rate and a 20.2-percent (No. 7) Air Yards Share. The Colts have faired well against TEs, but Andrews is the first elite TE they’ve faced. Start him as normal.

Marquise Brown is the No. 1 WR in this offense, as displayed by his 52.9-percent (No. 3) Dominator Rating. A case of the dropsies is the reason that he isn’t a PPR WR1. His productivity and efficiency metrics are solid, with 117 (No. 10) Yards After Catch and 3.08 (No. 10) Yards Per Route Run. The deep threat speedster is a start vs No. 63-ranked CB Kenny Moore, and should be slotted into DFS lineups.

The Ravens running back room is a crap shoot. Ty’Son Williams, the team’s most efficient runner, was a healthy scratch last week. Latavius Murray filled the void, trudging his way to 59 yards and a touchdown. Both backs have shown poor elusiveness, but Williams has been more effective with 5.6 (No. 2) True Yards Per Carry. Despite this, the Ravens have more confidence in Murray. He has emergency flex-appeal against a mid-tier rush defense if Williams sits, but neither have playable upside. 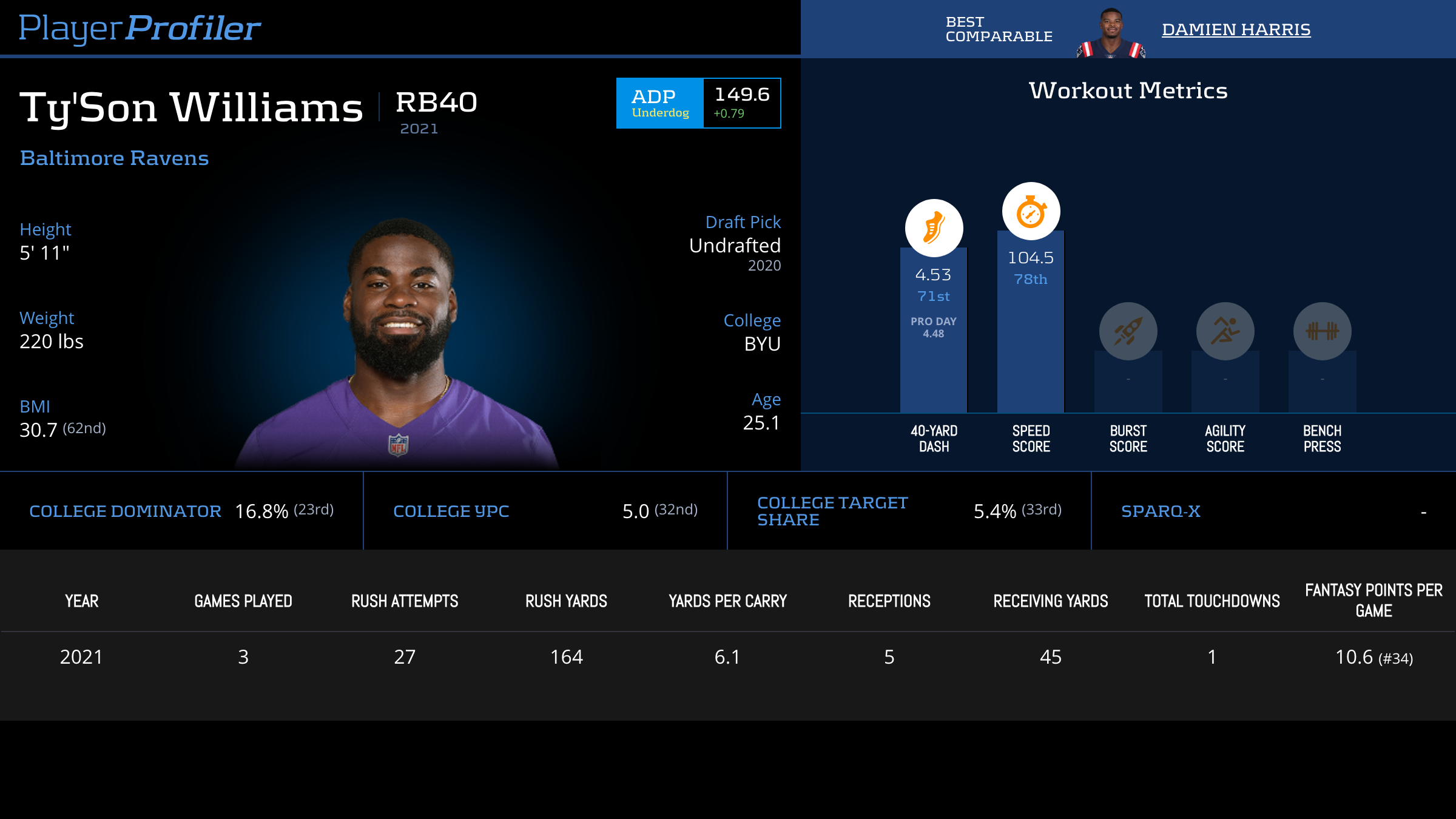 It’s too soon to tell whether or not rookie Rashod Bateman will make his debut against the Colts. If he does, it’s best to sit him. It’s tough to tune out the excitement, but he’s playing his first snaps post-groin injury. Make Bateman show some promise first.

Sammy Watkins sees as many targets as Marquise Brown does, but Watkins hasn’t done anything with them. He’s posted a nauseating 66.7-percent (No. 90) True Catch Rate and has yet to crack 15 fantasy points. He has a decent matchup against Xavier Rhodes, but is still a sit due to the fact that he stinks.

This is a clear-cut game, fantasy wise. Both teams have shown consistency in their touch distribution, and don’t have many ambiguous roles. The starts are guys you are typically comfortable with starting weekly, and the sits are guys you don’t consider playing unless you’re in a real jam.

This looks to be a Monday Night rout. I like the Ravens to cover the -7 spread in a game where they lead by multiple possessions for most of the game. Both teams play at a sluggish place. The Colts struggle to move the ball and the Ravens chew the clock when leading, and for that reason I’m favoring the under 46 point total.

My record on written Vegas predictions so far this season: 5-4