When there is so much going on, what should fantasy gamers and sports fans focus on? This is the question I will answer for you in this series of articles entitled, “Lessons Learned.” Here are the lessons we learned in Week 3 of the NFL season.

In 2021, Ben Roethlisberger completed his 18-year run as Pittsburgh Steeler starting quarterback. No longer willing and/or able to throw downfield, his final season included just 6.7 (No. 32) Air Yards per Attempt and a career-low 3.6-percent Touchdown Rate.

Heading into 2022, the Steelers signed Mitchell Trubisky to a one-year deal and drafted George Pickens to bolster an already-strong receiving corps. The plan was to have Trubisky as a bridge to their next long-term field general, 2022 first-rounder Kenny Pickett.

Unfortunately, Pittsburgh Mitch has looked too much like Chicago Mitch. Heading into Week 3, he was putting up 5.1 (No. 33) Yards Per Attempt and a -11.8 (No. 40) Expected Points Added. On Thursday, he threw for 204 yards against the Browns. This was less than Cleveland had given up to both Joe Flacco and Baker Mayfield in Weeks 1 and 2. With the Steelers now 1-2, and near the bottom of all offensive categories, those of us that drafted Pickett should get excited, right? 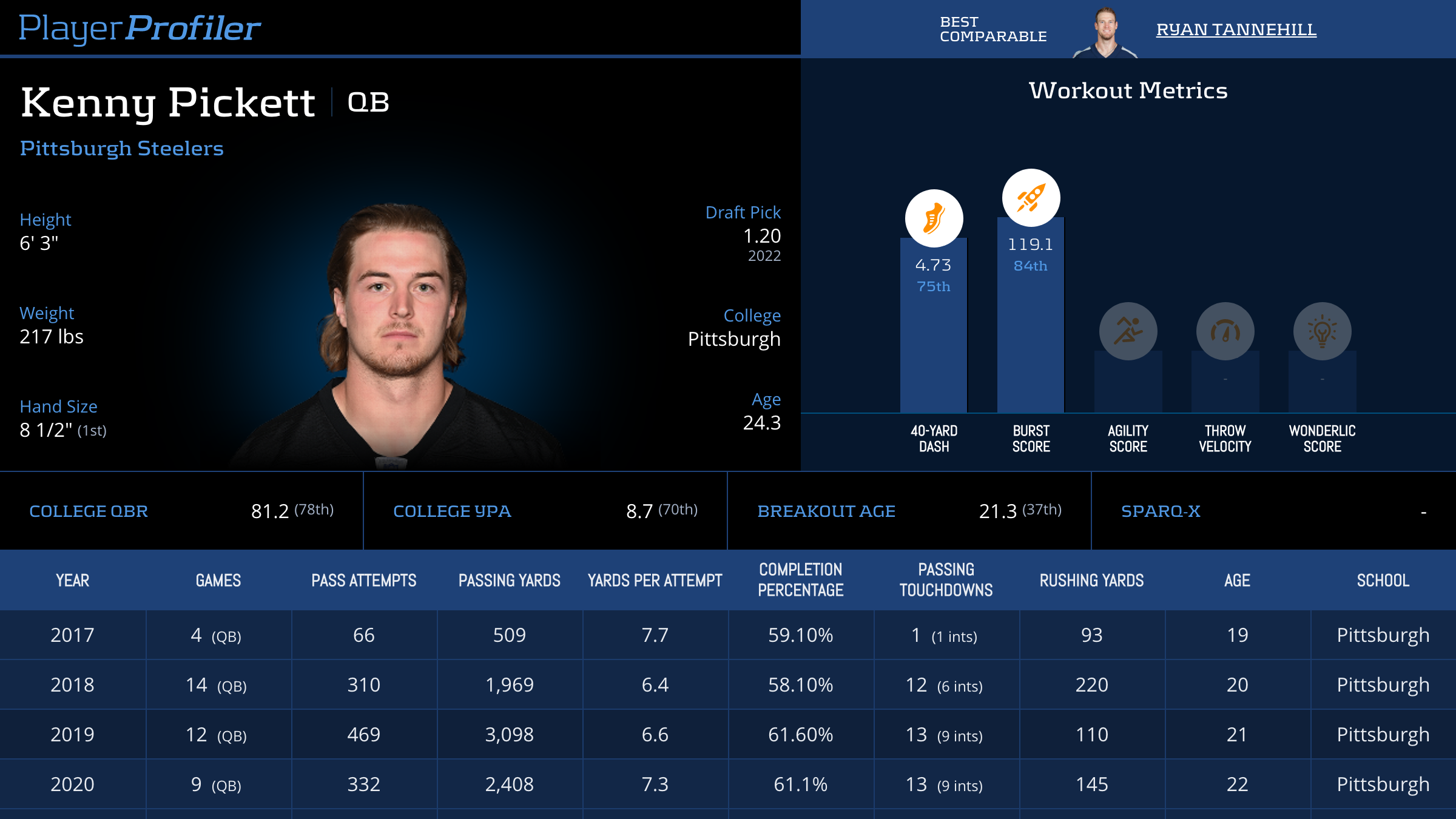 In redraft, no. Just look at their schedule. After Pittsburgh faces the suddenly-interesting Jets in Week 4, they’ll run this gauntlet: Buffalo, Tampa Bay, Miami, Philadelphia, New Orleans, Cincinnati, and Indianapolis. Neither Trubisky nor a rookie will be able to navigate that. The Steelers may not win another game until December.

In dynasty, on the other hand, they’re a buy. Pittsburgh still has an exciting receiving corps, a highly-drafted quarterback, and a solid, young pass-catching running back.

Action: In redraft, look to move Steelers before our league-mates see their upcoming schedule. In Dynasty, as the losses go up, their prices will come down. There’s no hurry to trade for Steelers now; they’ll be great targets in another month or two.

This year’s preseason TE ADPs were led by the Big Five of Travis Kelce, Mark Andrews, Kyle Pitts, George Kittle and Darren Waller. There was a tier-break to Dalton Schultz, T.J. Hockenson, Dallas Goedert and then the rest. For those of us that decided not to pay up, we’ve spent the first three weeks – and I assure you we’ll spend the rest of 2022 – trying to guess which tight ends to start, bench, drop and/or pick-up. 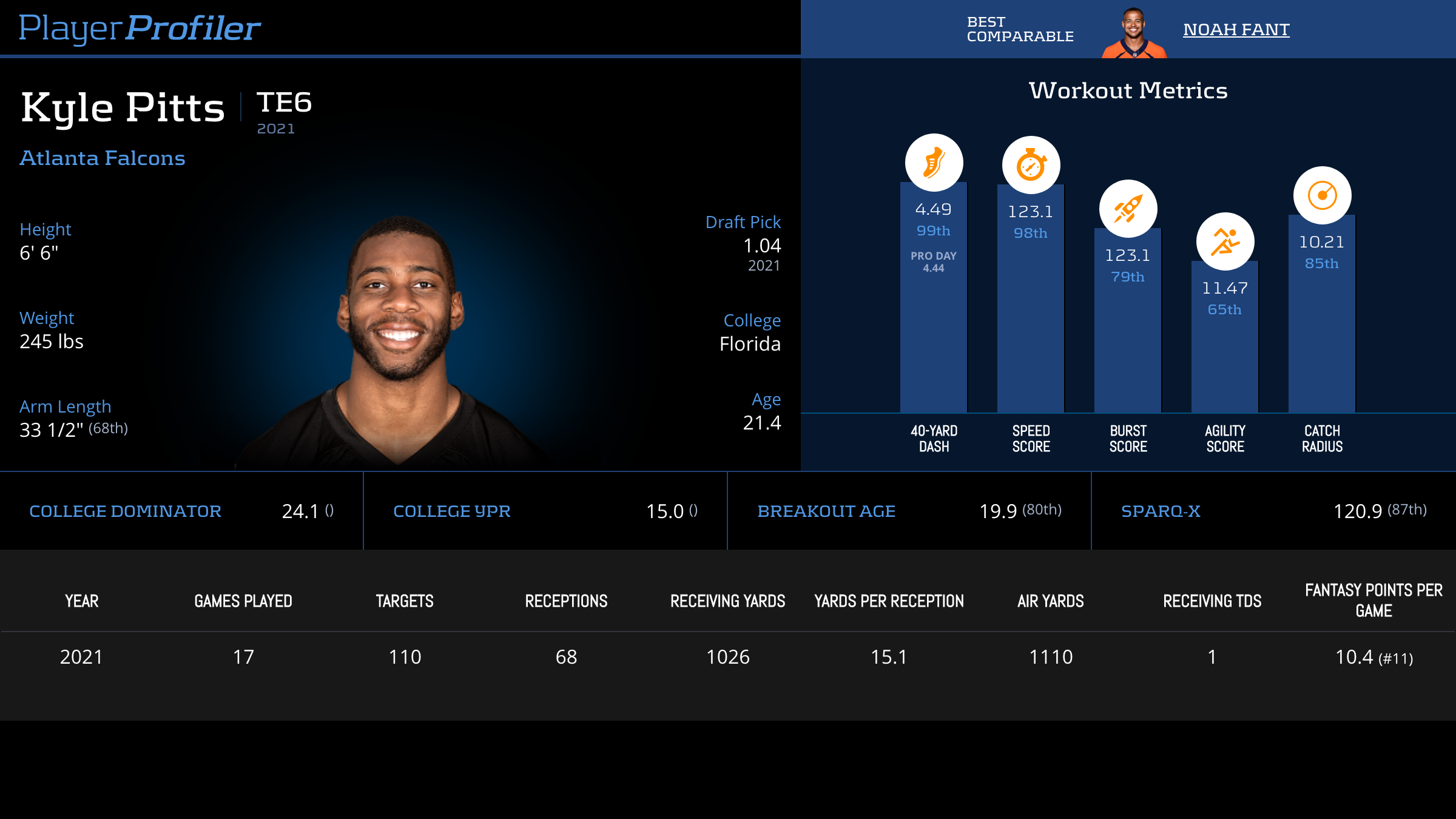 Five of Week 1’s top-12 tight ends finished Week 2 outside the top 40.  Six of Week 2’s top-12 finished Week 3 with two or fewer catches; only one of them put up more than 10 receiving yards.

Week 3 for the Big Shots?

Action: Next year, I do solemnly swear to pay up at tight end. On teams where I have Andrews this year, I don’t have to think about tight end. I have an advantage every week. Other teams, I’m pulling my hair out shuffling between the likes of Hockenson, Irv Smith, Tyler Conklin, Brevin Jordan, etc. etc.…

Last-minute inactives can mean a zero for unprepared fantasy managers. Fortunately, there are a couple simple steps we can take every week to help protect against these surprises:

Stash Backups to Your “Questionable” Players

If one of your players is declared questionable during the week, find a potential replacement to stash at the end of your roster. The replacement doesn’t have to be the player’s direct backup. If you manage your flex spots well (see item 2 below), he doesn’t even have play the same position. He doesn’t even have to be all that good – just avoid the zero. I added Cooper Rush in the event Justin Herbert would have missed Sunday’s game in my superflex league. This wasn’t a thrilling choice, but my other backups were playing earlier than Herbert on Sunday. I needed a fall back plan. If you already have a suitable backup on the roster, great. Double-check, though, that the backup starts at the same time or later than your questionable starter.

Say your league gives you three WR spots and a flex, and you intend to start four wide receivers in those spots. The guy you assign to your flex must be the one of those four whose game has the latest start time that weekend. Similarly, if the league has two RB spots and a flex, and you want to start three RBs, your flex must be the RB of those three that has the latest start time that weekend. It doesn’t matter who is the most talented among these players. It’s just about keeping your options open as late in the weekend as you can. I can’t tell you how many times I’ve seen opponents ignore game start times, filling up their flex spots earlier in the weekend than necessary and limit their own flexibility.

Actions: Stash the back of rosters with contingencies for “questionable” players. In flex leagues, look at the game start times and keep flex spots open as late as possible.

4) The RB Position is One of Attrition

It’s no news that running back is the most injury-prone position in football. That’s why Player Profiler always advises loading the back of our rosters with upside backup running backs. If a starting receiver gets hurt, the QB has several other options, a tight end, and running backs to throw to. Rarely will a wide receiver come off the bench and assume a team’s WR1 role. If a starting running back gets hurt, though, the backup often gets most, if not all, of the load.  Fantasy league winners often do so on the strength of late-season RB heroes.

In Minnesota, Dalvin Cook left Week 3 with another shoulder injury. Should he miss time, Alexander Mattison will have the run of the Vikings’ backfield. 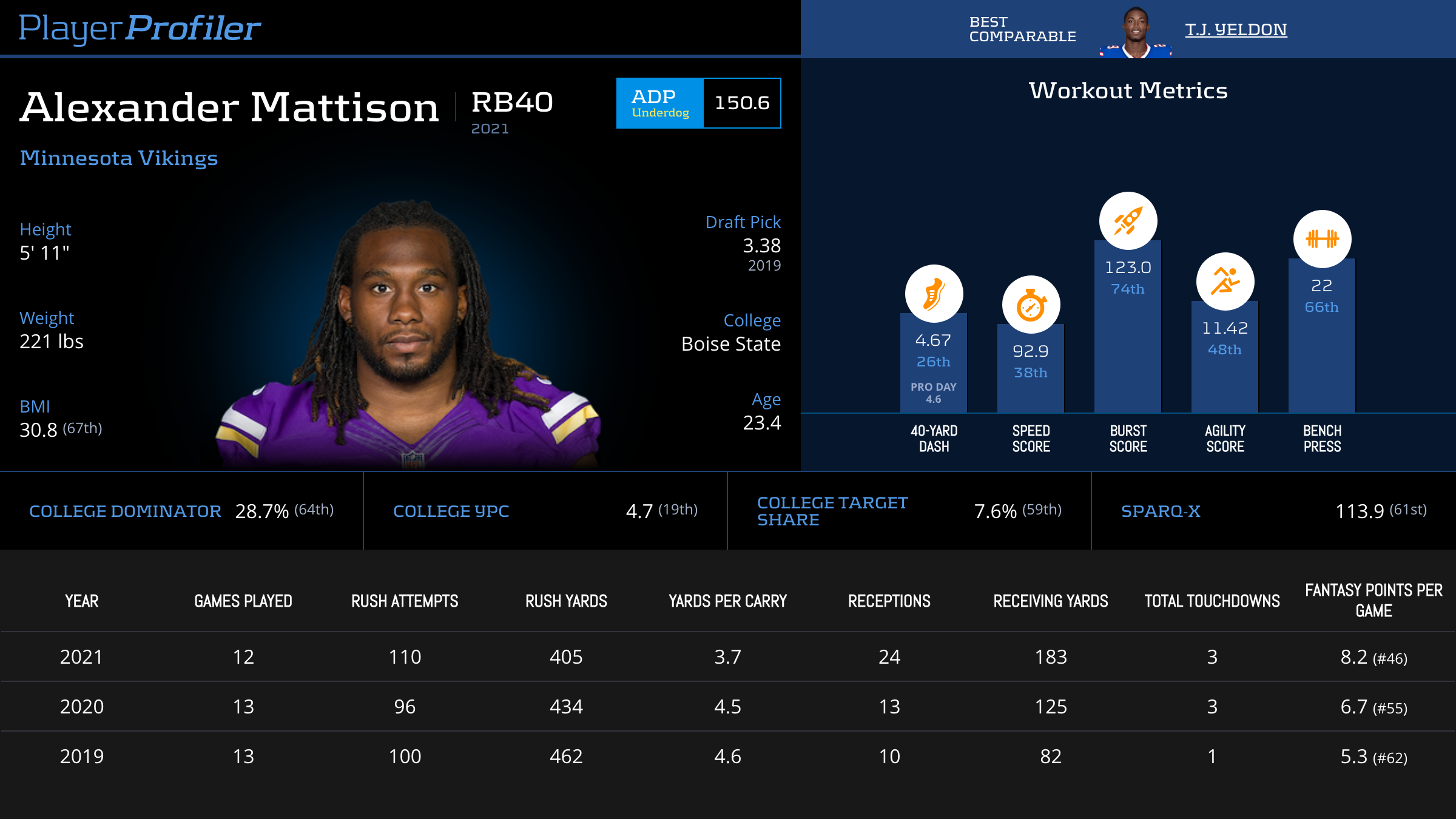 In Chicago, they might just find their backup (Khalil Herbert) is more talented than their starter (David Montgomery) and will have trouble going back to the status quo even when Montgomery is back. D’Andre Swift was hurt as well. We’re seeing starters go down, and we’re only through three weeks. In 2021, Rashaad Penny, Sony Michel, Rex Burkhead, Justin Jackson, Darrel Williams, D’Onta Foreman, and even Devonta Freeman posted RB2 or better numbers late in the fantasy season and through the fantasy playoffs.

Action: There aren’t many heavy-workload backs anymore. All capable backups running backs should be rostered.

5) This is the Real Trevor Lawrence

In the NFL, coaches don’t matter… much. Talent and athleticism drive athletic performance. However, I like to think of coaches like first-round fantasy draft picks. They usually won’t win your league, but they can lose it.

In 2021, Jacksonville followed the script. They used their No. 1 overall NFL draft pick to select Trevor Lawrence, who, by the way, had been labelled a future No. 1 overall NFL pick since his days at Cartersville High School. The Jaguars then proceeded to pair him up with one of those “league-losing” coaches – Urban Meyer. When Urban wasn’t out dancing, he did little to help rookie Lawrence or his Jaguars teammates succeed.

As a rookie, Trevor faced a -7.82 (No. 31) Game Script, meaning they played from behind virtually all the time. He had 138 (No. 2) Pressured Throws and threw 50 (No. 1) Interceptable Passes, forcing the ball to 31-year old Marvin Jones, Laviska Shenault Jr. and Laquon Treadwell.

Enter Doug Pederson. With a winning NFL head coaching record and a Super Bowl ring, he brought a ray of hope to the Jacksonville faithful. One bad season wouldn’t be enough to give up on one of the best quarterback prospects ever, would it? Heading into 2022, Jacksonville took some more steps to try to help Lawrence. They overpaid for receivers Christian Kirk and Zay Jones. They signed Brandon Scherff to try to help give Lawrence some time.  How has it turned out?

So far, so good! No. 15 in Fantasy Scoring after Week 2, Lawrence completed 28 of 39 attempts on Sunday for 262 yards and three scores in a 38-10 win over the Los Angeles Chargers. After Week 3, he now has six TDs to 1 pick. Last year, it took him five weeks to throw six passing scores. By then, he’d already thrown seven interceptions.

Action: Jacksonville is now a thing! Kirk is rostered, but Zay Jones, averaging eight targets a game, is an interesting waiver candidate.