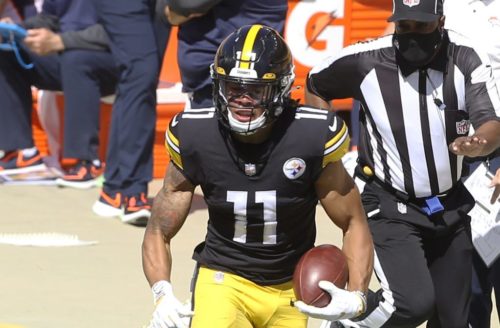 The first five weeks of the NFL season are in the books. The season remains in doubt due to COVID-related delays, but the fantasy football community continues at full swing. PlayerProfiler’s advanced stats and metrics are always here to help the public navigate the waiver wire.

Justin Jackson was discussed in the Week 5 waiver wire article as a roadblock to Joshua Kelley and a genuine Flex option moving forward. His usage against the Saints supports the idea that this is a split backfield during Austin Ekeler‘s absence. Jackson logged a 57.6-percent Snap Share, ran 15 routes, received six targets, and caught five passes for 94 yards. He scored 14.4 (No. 21 among qualified running backs) fantasy points compared to Kelley’s 4.8 (No. 43) fantasy points on a 39.4-percent Snap Share. Jackson should be rostered in all formats as a low ceiling RB2.

Running Back Handcuff season is among us. No workhorse backs went down in Week 4, but Dalvin Cook seems likely to miss one week. Alexander Mattison (41%) must be started as an RB1 in Week 6 and stashed moving forward as the highest priority handcuff available. Tony Pollard is only (22%) becomes an instant top ten option if Ezekiel Elliott were to miss time. Brian Hill (20%) seems positioned to be the primary backup to Todd Gurley. Lastly, Duke Johnson (28%) is both a handcuff and a potential Flex option without a David Johnson injury depending on the splits with Bill O’Brien gone.

Chase Claypool is the hot ticket pickup for Week 6 after a four touchdown performance against the Eagles. His efficiency will obviously come down to Earth, but his profile supports his breakout being for real.

The Steelers average 37.2 (No. 16) Team Pass Plays per Game, so there is plenty of opportunity for Claypool. He has 128 (No. 10) Yards After Catch, a 7.3 (No. 16) Target Quality Rating, and a 147.9 (No. 8) QB Rating When Targeted. His eruption was seemingly linked to Diontae Johnson being injured. However, the overall productivity of this offense can lead Claypool to weekly fantasy success.

Brandin Cooks and fantasy analysts have had a love-hate relationship in recent years. His performance has been up-and-down with Texans and the constant team changes makes projections difficult. Add in a significant concussion history and we get a player that most people do not want to be bothered with. Cook’s 8-161-1 receiving line on 12 targets in Week 5 exemplify why murky situations shouldn’t be completely ignored. It’s possible that the increased downfield passing for Houston in Week 5 is the new status quo in the post-Bill O’Brien era. If the volume stays elevated, Cooks’ ceiling will remain high.

Henry Ruggs had a huge game against Kansas City, catching two deep balls for 118 yards and a touchdown. The first receiver off the board in the 2020 NFL Draft may be in line for an increased work as he recovers from an early-season soft tissue injury.

Ruggs’ 4.27 (100th-percentile) speed was on display, but fantasy players need more than three weekly targets to confidently start a receiver. He goes on bye this week and his workload moving forward is in question. It’s concerning when even John Gruden is making jokes about the Raiders actually throwing the ball downfield. Ruggs can be a nice add if you can afford to hold him for a few weeks.

Mecole Hardman is poised for increased production following Sammy Watkins becoming the most recent victim of the dreaded hamstring injury. Watkins will miss a few weeks and Hardman will be the primary beneficiary of the vacated targets.

Tyreek Hill missed Weeks 2-5 last season, allowing Hardman to exceed a 65.0-percent Snap Share and a 12.0-percent Target Share in those weeks. Rookie year Hardman put up three double-digit scoring weeks in that time and saw five or more targets in each game. Fire him up as a boom/bust Flex option with Watkins out.

Mike Williams has dealt with injuries for multiple seasons that have capped his upside. Williams was a first round pick and has shown signs of being a talented receiver at the NFL level. His five catches for 109 yards and two touchdowns in Week 5 against the Saints were impressive. Justin Herbert has sparked some life in the Charger’s offense. Williams comes with inherent injury risk, but WR2 upside is in play if the Chargers keep playing at the same pace.

Keelan Cole has been consistent in 2020 with 5-7 targets in every game and three touchdowns on the year. D.J. Chark suffered an ankle injury on Sunday and is expected to miss time. This offense struggles to produce high level production without Chark, but Cole’s potential volume increase makes him an interesting Flex option for the next few weeks. He will be better in PPR with an increased Target Share, but the touchdown upside may diminish if Chark’s absence hinders Gardner Minshew from pushing the ball down the field.

It is possible that we live in a world where Preston Williams just needed a few weeks to gain confidence and finalize his rehabilitation from a torn ACL. In fact, his 106 yards and one touchdown on four receptions suggest that his explosive playmaking ability is back. His volume has not been great with an average of two receptions per game, but his ceiling becomes high-end WR2 if the weekly usage increases. The Dolphins as a whole are hit-and-miss under Ryan Fitzpatrick, but Williams may very well be this year’s version of DeVante Parker with a mid-season breakout.

Travis Fulgham looks like 2020’s Phillip Lindsay; the undrafted guy nobody ever heard of who may finish top 24 at his position. Going 10-152-1 on 13 receptions against a powerhouse defense in Pittsburgh is impressive regardless of circumstance.

Philadelphia’s carousel of receivers over the last two years, a result of poor acquisitions and injuries, has been maddening for fans of the team and the sport. Carson Wentz can sill activate high-end fantasy receivers and as of Week 5, his best weapon is Fulgham. Add him in all formats as the ultimate boom/bust acquisition of 2020. His range of outcomes include returning to irrelevancy or ascending to moderate stardom and at least Flex value.

Irv Smith spent September as a late round tight end bust with almost no on-field production. After coupling moderate rookie production with a player profile suggestive of elite upside, the hype train operated all offseason for Smith. Nobody predicted Minnesota coming out flat to start 2020. The team has caught its footing and will produce better numbers moving forward.

Smith went 4-64-0 on five targets with a 72.5-percent Snap Share in Week 5 and may continue to carve out a role this season. He’s a long shot play for those who are desperate at tight end or need depth with upside. The consolidated Target Share in Minnesota is unfavorable for players not names Adam Thielen or Dalvin Cook.

Jimmy Graham has scored four touchdowns so far this season. He is a fine plug-and-play option if you need a tight end to fill in during a bye week or for a minor injury. He is a touchdown-dependent backup tight end.