September has come to a close, and with it, the first quarter of the NFL season is in the books. Injuries and unexpected risers have been abundant, and with that, plenty of weekly action on the waiver wire. Count those FAAB dollars and get your advanced stats and metrics from PlayerProfiler in order to dominate the waiver wire this week.

Joshua Kelley is an admirable athlete and has solid college production, recording over 2,500 all purpose yards in two seasons at UCLA. PlayerProfiler subscribers already know all about his upside. He’s healthy Sony Michel.

Kelley’s 35 rushing attempts between Weeks 1 and 2 came with modest production and signs of playmaking ability. His usage was throttled back in favor of Austin Ekeler over these last few weeks, but Ekeler is slated to miss 4-6 weeks with a Grade 2 hamstring strain. The split between Kelley and Justin Jackson is yet to be seen, but both players warrant a bid going into the Week 5 waiver run.

Justin Jackson is the newest roadblock to a Joshua Kelley Week 5 breakout. Analytics Twitter loves Kelley, but the coaching staff endorses Jackson, who does boast a 10.88 (96th-percentile among qualified running backs) Agility Score. Evidenced by logging 12 (No. 71) Evaded Tackles on 29 (No. 82) carries in 2019, good for a 31.6-percent Juke Rate.

Kelley has the higher ceiling if given the lion’s share of the work, but Jackson is a must add given the uncertainty of the split.

In his first action of the season, Damien Harris logged 17 carries for 100 rushing yards against the Chiefs. While those numbers were buoyed by a 41-yard jaunt in the third-quarter, he was the clear lead option in the run game over Rex Burkhead.

Harris isn’t likely to see many targets given the presence of Burkhead and James White. Still, if he can hold onto his role until Cam Newton returns from his bout with COVID, he will be a valuable fantasy asset in games where the Patriots project to play with a lead.

Latavius Murray has logged over 10 touches in three of four games this season, providing fantasy RB3 value behind Alvin Kamara on this New Orleans offense. The Saints have struggled early this season, but this is still a haven for running back production. Murray is worthy of a bench spot if available on the waiver wire.

Chase Edmonds has clearly carved out a satellite role in the Cardinals offense with 17 (No. 11) targets and two (No. 18) touchdowns (both receiving scores) through four weeks.

Kenyan Drake has failed to live up to his potential as the bell cow in Arizona. If this continues, he will lose more opportunity to Edmonds. Should he get hurt, Edmonds becomes an immediate plug-and-play RB2 with upside.

D’Ernest Johnson stepped in as the short-yardage back following Nick Chubb‘s Week 4 knee injury. Chubb is expected to be out at least six weeks, and Kareem Hunt is also dealing with a groin injury.

d’earnest johnson will not be a waiver priority this week. small, sub-athlete, and the browns’ rb routes run were divided as follows:
*hunt: 11
*hilliard: 6
*janovich: 2
*johnson: 2 pic.twitter.com/pT0O82Zg0h

Hunt is an RB1 for fantasy purposes and will see the majority of touches, but a looming groin injury means some kind of weekly workload management. Still, Johnson’s only path to weekly Flex consideration is to carve out a role that can mirror that of Latavius Murray in New Orleans.

Ke’Shawn Vaughn saw his first NFL action in Week 4 with Leonard Fournette sitting out. Ronald Jones acted as the primary back, but a Vaughn scoring a receiving touchdown was promising.

Because Jones can’t keep him grounded forever, Vaughn is worth a flyer on benches, at least while Fournette deals with his ankle injury.

Scott Miller is the current WR32 in PPR formats, averaging 11.7 (No. 38) Fantasy Points per Game, and is a featured weapon for Tom Brady with Chris Godwin dealing with a hamstring issue. Miller is dealing with lingering injuries, but doesn’t project to miss time. He’s proved through four weeks that he’s not just a slot receiver. He has averaged 16.7 (No. 10) Yards Per Reception and 17.2 (No. 4) yards of Average Target Distance, while logging 201 (No. 19) Completed Air Yards. 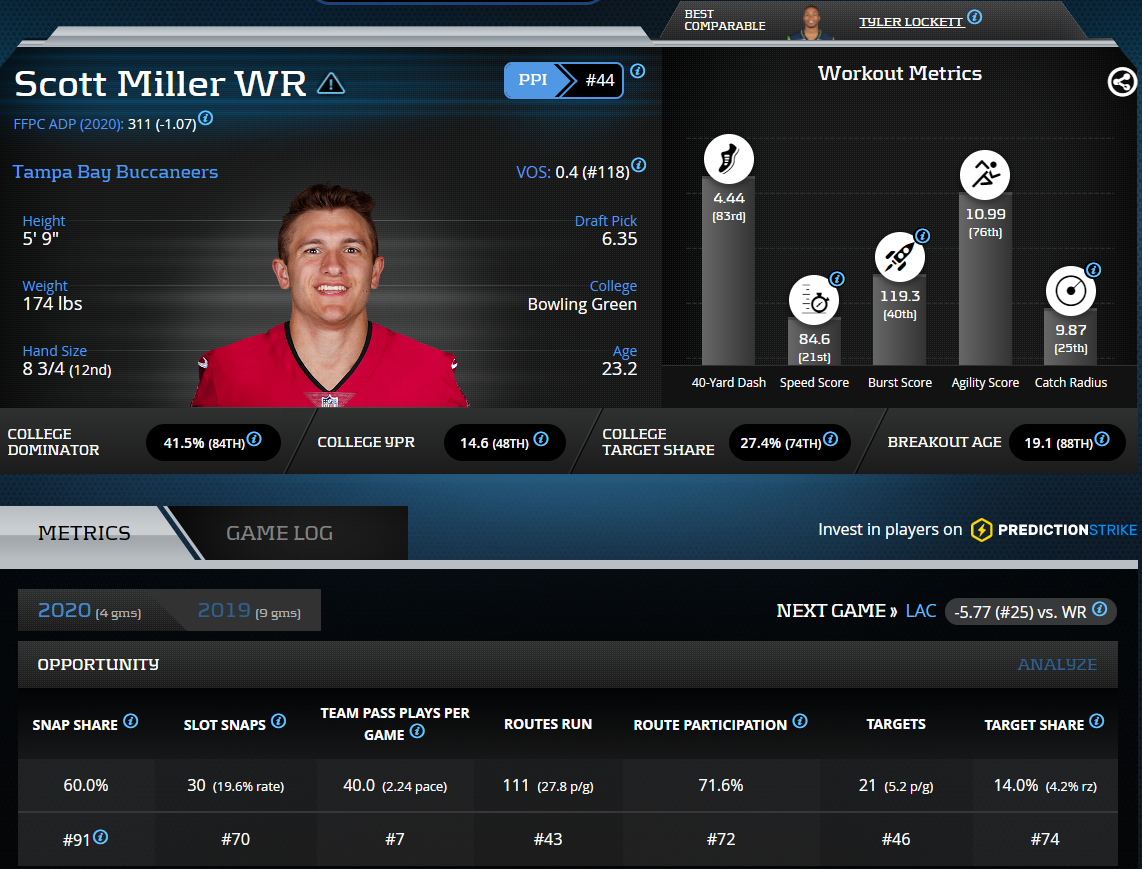 Temper long-term expectations for a player with 49 (No. 55) Yards after the Catch and a 71.6-percent (No. 72) Route Participation rate, but he’s a usable Flex play for now.

Laviska Shenault‘s mini breakout in Week 4 has been overlooked due to D.J. Chark‘s resurgence with two touchdowns. Shenault caught five passes for 86 yards, running a season-high 34 routes. He has broken a 50-percent Snap Share in each week this season, and the Jaguars are slated for plenty more negative Game Script. 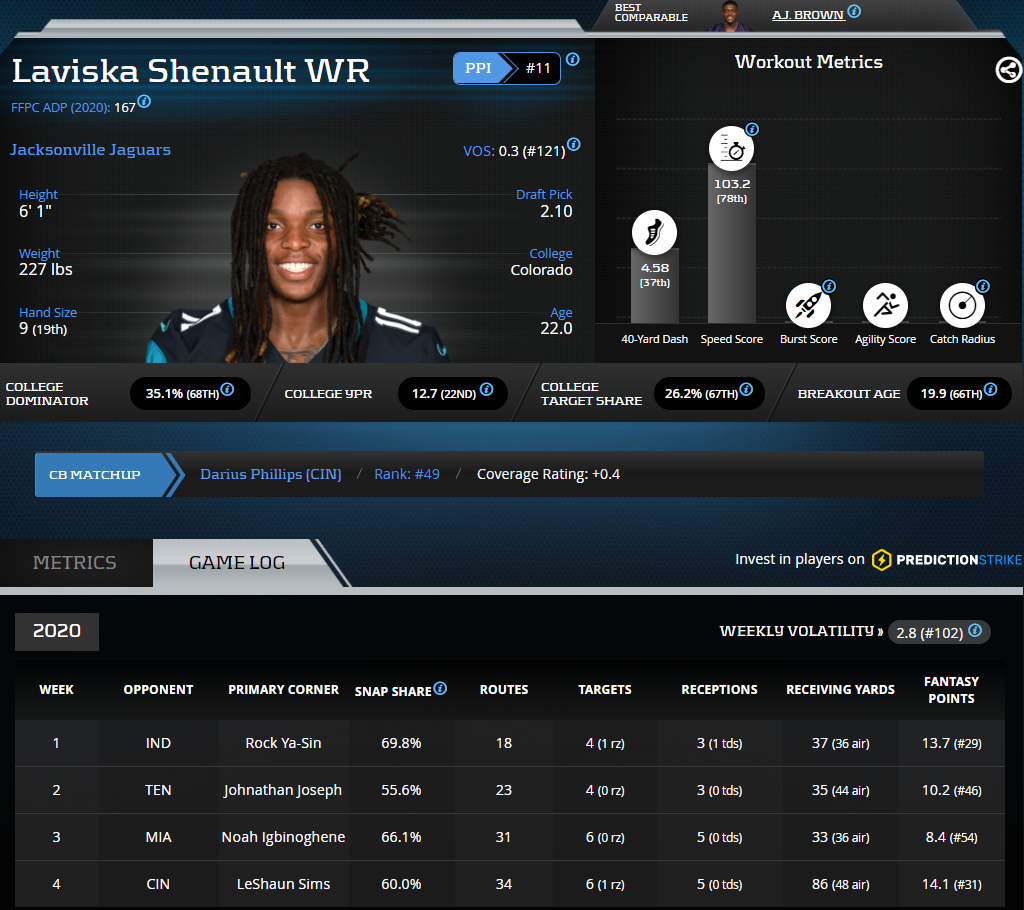 Minshew Mania can certainly keep generating Flex value for Shenault, who currently sits as the PPR WR34 on the season and averages 11.6 (No. 40) Fantasy Points per Game.

Tre’Quan Smith has stepped when called upon in Michael Thomas‘ absence. His 14-186-2 receiving line through four weeks has him at PPR WR37, even though his 11.1 (No. 46) Fantasy Points per Game average is brought down by his 1.4-point Week 1 outing.

The Saints will have to throw plenty to stay relevant, and Smith has the talent to retain a starting role after Thomas returns.

Tee Higgins is slowly but surely emerging as a featured piece in Cincinnati’s weekly game plan. The second round pick has seen broken a 50-percent Snap Share in each of the last three games, drawing 22 (No. 38) targets in that span. His back-to-back weeks with double digit fantasy points cannot be overlooked.

Joe Burrow has thrown for over 300 yards in three consecutive games. Higgins is a good add with Flex appeal and possibly more moving forward.

Corey Davis has shown signs of a late career resurgence in 2020 and has become available in many leagues after a COVID-related game postponement. With workload uncertainty after A.J. Brown returns to the lineup, he’s not a high priority add. Still, he belongs on a bench and not on the waiver wire.

Tim Patrick is a decent dart throw after a big Week 4 performance, with six receptions for 113 yards and a touchdown. His chemistry with incumbent backup Brett Rypien seems promising, but they did play against the NFL’s official junior football team, the New York Jets. Take a shot if desperate, but don’t lose any sleep if you miss out.

Hunter Renfrow‘s 11-141-1 receiving line over his last two tough matchups (vs. NE & BUF) is promising. Renfrow has definite Flex value despite a limited ceiling due to the Raiders offense under Derek Carr. His Week 5 matchup with Kansas City provides shootout potential, but don’t go too crazy pursuing him on the waiver wire. The upcoming schedule includes a Week 6 bye, Tampa Bay, Cleveland, and the Chargers. His floor should keep him fantasy relevant.

Darnell Mooney continues to out produce Anthony Miller in Chicago. His nine targets in Week 4 marked a career high, and he now has a quarterback upgrade.

darnell mooney was on the field more than anthony miller for the third straight week.

The Colts were a hard matchup, but a Week 5 breakout on Thursday night against the Bucs is within Mooney’s range of outcomes.

Greg Ward continues to produce when called upon in Philadelphia. The Eagles are once again devastated by injury at the skill positions and Ward is the de facto No. 1 receiver.

With a volume-driven fantasy floor, he belongs on fantasy benches.

Gabriel Davis only caught one pass in Week 4 but made sure to make it count, taking it in for a 26-yard touchdown. While he didn’t set career-highs across the board like he did in Week 3, it’s worth noting that the Bills run 4-5 WR sets at a 21.7-percent clip, which leads the league by a wide margin. Even as Buffalo’s No. 4 wide receiver, Davis can provide boom weeks with room for much more upside should injury befall this WR group.

Olamide Zaccheaus is on the radar after catching eight passes for 86 yards on Monday Night Football. The Falcons currently average 44.2 (No. 3) Team Pass Plays per Game and project to keep throwing the ball at a high rate.

Robert Tonyan put up three touchdowns in primetime against the Falcons, finishing Week 4 as the No. 2 tight end with 33.8 fantasy points. He is clearly in good favor with Aaron Rodgers and he is now tied for a league leading five touchdowns on the season. This one is a layup, add Tonyan.

Mo Alie-Cox is currently the PPR TE14, averaging 10.6 (No. 15) Fantasy Points per Game. His Week 4 matchup with Chicago was tough, but the schedule loosens up moving forward with Cleveland, Cincinnati, and Detroit coming up.

reducing taylor and cox usage to feature burton is a serious misallocation of offensive resources concealed by a W on the scoreboard.

Alie-Cox is a high-floor backup for teams who need a tight end, though his usage needs to be monitored with Trey Burton and Jack Doyle back in the fold.

O.J. Howard had a huge Week 3 performance, proving that tight ends have upside in the Bruce Arians offense. Sadly, Howard left that game with an injury. His absence opens the door for Arians to spend time scheming up plays for former WWE Superstar Rob Gronkowski. After utter disappointment to start the season, Gronk has become widely available on waivers across fantasy football leagues.

Ian Thomas has not the seen the usage we expected going into the season. Though he finally scored a touchdown and saw his first two red zone targets of the year, he still hasn’t eclipsed 16 receiving yards or 8.5 fantasy points in any game, so expectations need to be kept in check.

with 5 quality receivers on the roster to start the season, we knew someone would get squeezed out in carolina.

the answer is curtis samuel as the fantasy points reflect the usage.

On the plus side for Thomas, his routes run have remained consistent and he does rank highly in one of PlayerProfiler’s important TE metrics, with a 77.8-percent (No. 15) Route Participation mark. At worst, he deserves spot start consideration against a Falcons defense that was disemboweled by Robert Tonyan on Monday night. Staying under 10 fantasy points will make him easy to acquire during this week’s waiver run.