Welcome to Part 2 of Avoiding the Tight End Wasteland: our series looking into expectations for tight ends next season. Part 1 took a look at the studs that will go early in drafts. This part will take a look at the tight ends you should be able to get later, and that can potentially produce at a high level.

The dreaded Tight End Wasteland is a term that has become all too familiar in fantasy football. It’s a place you never want to be, but also a place that can be hard to avoid. We can’t all be lucky enough to land a set-and-forget tight end. Last season, only four averaged over 15.0 full PPR Fantasy Points Per Game. To put it into perspective, there were 20 WRs and 17 RBs averaging over 15.0 FPPG. So even in eight-team leagues, chances are there’s at least a couple teams disappointed in their tight end week-to-week.

Tight end also isn’t a position like running back where the volume will just go down to the back-up if injured. A handcuff doesn’t necessarily make sense for a tight end.  In the three games George Kittle missed last season, his two backups, Charlie Woerner and Ross Dwelley, only combined for 10 targets. Kittle had 3 games with 10-plus targets alone last season. With all this in mind, it shows just how important it is to secure your tight end position both in your starting lineup and your bench in case of injury. So let’s take a look at some prime candidates for a solid season to help us avoid the tight end wasteland next year.

These are the guys on a potent offense with a good profile. If everything goes well for these players, they should have the same ceiling as the tight ends from Part 1 .

Dalton Schultz had a breakout season last year, where he finished as the No. 3 overall tight end. In PPR, he averaged 12.3 (No. 5 among qualified tight ends) Fantasy Points Per Game. That inspires confidence as two of Dallas’s receiving weapons left the team this offseason. Cedrick Wilson joined the Dolphins in free agency, and Amari Cooper went to the Browns via trade. So as it stands right now, the Cowboys passing attack is CeeDee Lamb, Michael Gallup, and Schultz. Last season he had a 16.4-percent (No. 13) Target Share. Gallup had a 16.6-percent (N0. 57 among qualified wide receivers) Target Share. They also both had around a 13-percent Red Zone Target Share.

The logical conclusion is that Gallup and Schultz will be the 2a and 2b receiving option in this offense next season with both getting an uptick in Target Share. There’s a ton of targets to go around with the Cowboys averaging 38.1 (No. 4) Team Pass Plays Per Game.

With Noah Fant being shipped out to the Seahawks and Russell Wilson coming to town, the sky is the limit for Albert Okwuegbunam. It’s a small sample size, but his 29.9-percent Target Rate 91.7-percent True Catch Rate are exciting statistics. It’s also worth noting that 255 of his 330 receiving yards last season came after the catch. That means that a whopping 77-percent of his yards came after the catch. Expect him to showcase his 100th-percentile speed next season.

Former 49ers offensive coordinator Mike McDaniel is heading to Miami along with speedster Tyreek Hill. McDaniel spent one year as offensive coordinator, and in that year, created a breakout season for Deebo Samuel without hurting the production of George Kittle. The Dolphins wide receiver corps Hill and Jaylen Waddle is the fastest one-two punch in the league. Mike Gesicki, scoring in the 95th-percentile or higher in all workout metrics, is no slowpoke either. He is fast, he is strong, and he is also 6-6. He should provide the thunder to Hill and Waddle’s lightning. The ceiling may be limited with there being so many options to score on that offense. But there should hopefully be some games where he blows up.

View Gesicki as a boom or bust option. And be pleasantly surprised if he does actually bring consistency to the table. It’s just hard to imagine that he has many games with multiple TDs when any one of Hill, Waddle, Chase Edmonds, Raheem Mostert, or Tua Tagovailoa can instantly turn a small gain into a touchdown. One more cause for concern is that he had 111 (No. 4) targets, but only averaged 9.7 (No. 14) Fantasy Points Per Game. He’s had three seasons now with 85 or more targets and still hasn’t topped 800 yards. However, with an offensive mind coming to town, maybe his full potential will finally be reached.

David Njoku has only had one season as the bona fide TE1 on the Browns. He’s either been hurt or battling Austin Hooper for targets. That year was 2018, Baker Mayfield‘s rookie season. Njoku finished that year with 56 catches, 639 yards, and 4 TDs, averaging 9.6 (No. 10) Fantasy Points Per Game. Now, Hooper is gone and Deshaun Watson is coming to Cleveland. It’s a clear upgrade for Njoku who now has more targets coming his way and a better QB. Both Watson and Mayfield have fpir seasons under their belt. Mayfield has never averaged more than 18.0 PPG, and Watson has never averaged less than 21.0 PPG over the span of a whole season. I view Njoku’s 2018 season as his floor going forward, with a potential to have a really high ceiling.

The guy who tied for most touchdowns (9) among tight ends last season looks to keep the pace going this season. Last season, Dawson Knox had a 17.6-percent Red Zone Target Share, which is second on the Bills and nearly 12-percent lower than Stefon Diggs. But that’s not necessarily an issue when the team you’re on put up 483 points across the season. In fantasy football, you chase efficient offenses. And you chase the red zone targets on that offense, especially if they’re the tight end. Knox is not only a red zone target on one of the league’s best offenses. He also sports a great profile for someone that is 6-4 and 254-pounds. 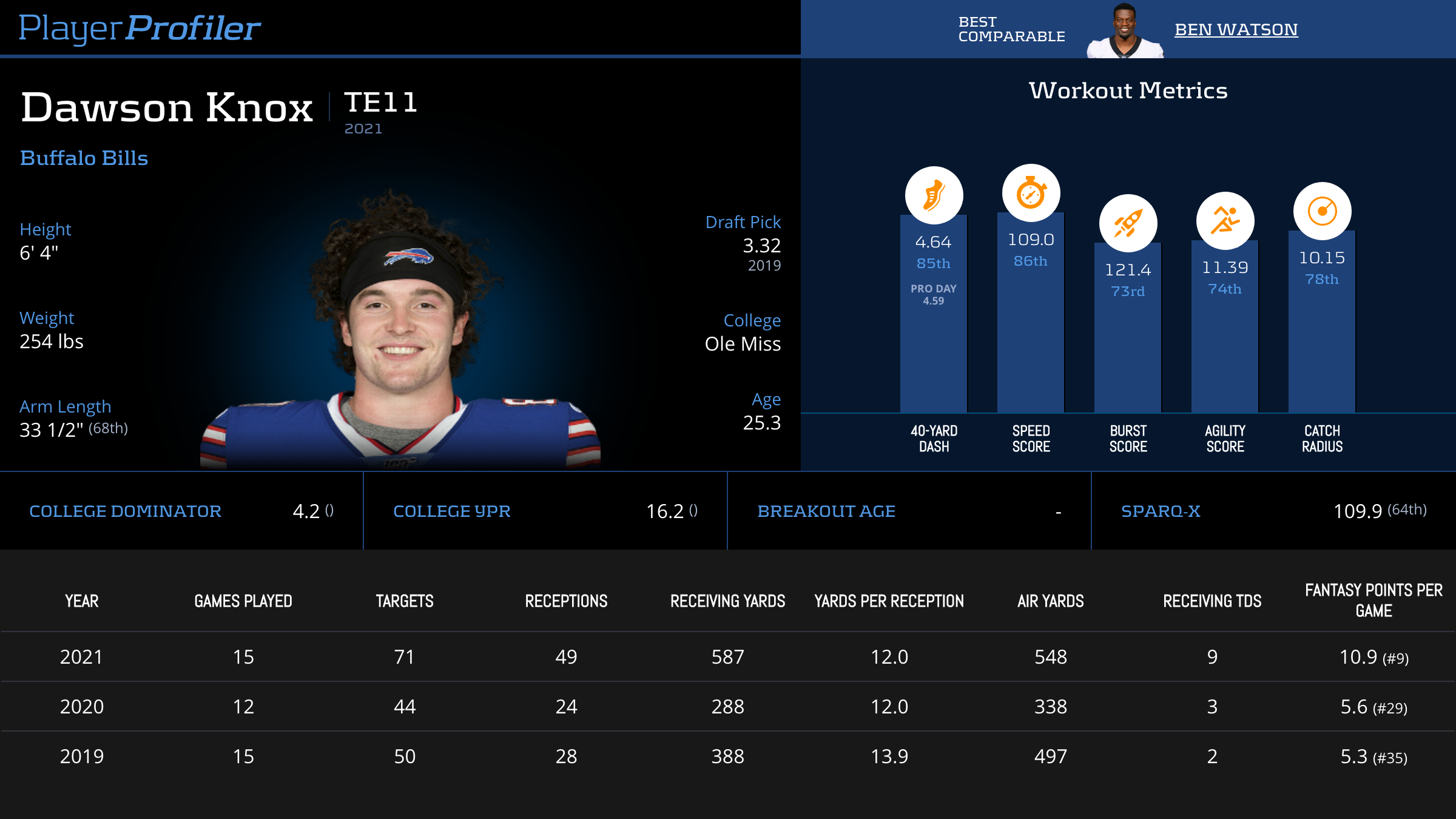 All signs point to production for Knox next season, however his stock may have taken a hit. This offseason the Buffalo Bills have signed Jamison Crowder and O.J. Howard, who hasn’t really produced much yet, but is still a threatening tight end to have behind you on the depth chart. Crowder sported a 23.1-percent Red Zone Target Share last season with the Jets, so he may carve into Knox’s role as well. However, you have to imagine that three years with Josh Allen would have established some chemistry between the two in the red zone and that Knox’s role won’t be affected too much. It could go either way so if you do decide to draft him, make sure to have a backup option ready in case his role has diminished.

These are guys with a solid profile on a good offense, but for whatever reason have low value and may even go undrafted. Take these guys at the end of your draft in hopes they can tap into their potential.

I ranked Hayden Hurst No. 8 in my list of free agents going somewhere new. Read what I wrote about why the expectations are high for Hurst next season.

Former first-round pick Hayden Hurst may finally get the opportunity he’s been dreaming of. C.J. Uzomah signed with Jets, so Hurst will own the Bengals tight end spot. Head coach Zac Taylor already had some praise, saying Hurst “can be a real weapon and asset” for the team. In Hurst’s only season as the true starter, he finished the season as TE10 overall in full PPR formats. He averaged 9.3 (No.15) Fantasy Points Per Game in 2020 off of 56 catches for 571 yards and six touchdowns. All of those stats are better than Uzomah put up last season with a much more potent offense than the Falcons had. It’s a small, but welcome upgrade for the Bengals that should pay dividends. There’s a reason he was drafted in the first round. If he can tap into that potential, then there may be a pretty high ceiling for him.

I ranked Gerald Everett No. 10 in my list of free agents going somewhere new. Here’s what I had to say and why I believe next season could be a huge turning point in Everett’s career.

The Los Angeles Chargers got their new TE1 in Gerald Everett. The move comes at a great time as Jared Cook isn’t on the roster anymore. Everett has been underwhelming through his career so far, never averaging more than 8.0 Fantasy Points Per Game in a season. Now, he finds himself in a fantastic landing spot. Last season, Jared Cook only had a 57.0-percent (No. 39 among qualified tight ends) Snap Share and still averaged more FPPG than Everett and his 73.2-percent (No. 18) Snap Share. Combining the targets of Cook and Donald Parham last season gives you 110 targets. That’s the same amount of targets Kyle Pitts received last year. Everett has never received more than 63 targets in a season, so this is an excellent opportunity for him.

Every single year, the hype comes in for Evan Engram. Every single year, he underperforms. Engram has only finished one full season in his five-year career. However, the hype always comes for good reason. He has a very athletic profile, and is such a promising prospect. He just has not tapped into his potential. This is the year he may finally do it, as he is heading down to Jacksonville and joining new head coach Doug Pederson for a rebuild.

Engram is faster than every wide receiver on the Jaguars roster. His only competition will be Dan Arnold, who has never averaged more than 7.0 Fantasy Points Per Game. So it is reasonable to assume that Engram will slide into the TE1 spot. Assuming Trevor Lawrence takes the next step and that the Jaguars probably won’t have an offense as bad as last year’s, he could be a valuable asset if he stays healthy. He should be an interesting late-round flyer, but honestly may never be anything more than boom-or-bust.

You may have noticed some players that were omitted from this tight end series. Namely Noah Fant, Zach Ertz, Pat Freiermuth, Tyler Higbee, and Hunter Henry. This is because these guys don’t inspire much confidence in terms of ceiling. As talented as he is, Fant at this point in time still has Drew Lock as his QB. Ertz should be consistent, but has a limited ceiling with DeAndre Hopkins on the field. He only had one double-digit game when they played together in Week 7. Freiermuth should be a reliable red zone target, but has an average profile and an unproven QB. Higbee really only has value because he’s on the Rams. Henry is still technically battling Jonnu Smith for targets and OC Josh McDaniels has left the building. These guys are fine fantasy assets and should be fairly consistent, but have an unpredictable ceiling to say the least.

Chances are that you will be better off going for a tight end with a high ceiling and then hedging that player with a consistent tight end like one of these. Drafting Kyle Pitts early and then ending your draft with Tyler Higbee would be an excellent strategy. Or drafting one of the deep value tight ends in hopes they do reach their ceiling, and then if not- you still have someone like Hunter Henry to plug in if it doesn’t work out. Owning two tight ends will be instrumental in avoiding the tight end wasteland. It prevents your league-mates from having a hot commodity, and eases anxiety if your stud tight end goes down.