Courtland Sutton exploded in Week 2, posting nine receptions for a 159 yards and finishing as the WR4 on the week. He saw 261 Air Yards, which is more than five times the amount he saw in Week 1 with Jerry Jeudy on the verge of a breakout. With Jeudy out of the lineup for the foreseeable future, Sutton is locked in as the Broncos go-to alpha receiver. At $6,00,0 he should be locked into cash lineups. However, with the Broncos and Jets unlikely to shoot out, he is best left out of your tournament lineups.

Tyler Lockett is the WR2 in Fantasy Points Per Game and Josh Larky is a happy man. Both Lockett and teammate D.K. Metcalf have seen 16 targets, however Lockett has over 100 more Air Yards on the season. He leads the league with six Deep Targets, and with a higher Average Target Distance than Metcalf, he is Russell Wilson’s go-to field stretcher. With a plus matchup against a Vikings defense, he makes for a preferred lineup option in all formats.

WE KNOW TYLER LOCKETT IS BALLING OUT, BUT WHY WAS I SO HIGH ON HIM BEFORE THE SEASON?

Lockett out-targeted Metcalf in 2020, then signed a 4-year pic.twitter.com/BQOQsXWv0n

Anthony Schwartz goose-egged in Week 2 despite seeing over 75-percent of the snaps in the Browns offense. He only saw one target and amassed zero Air Yards. This was a large departure his Week 1 performance in which he finished with 11.6 fantasy points and saw 126 Air Yards. He is a risky play in week three coming off a zero fantasy point performance. However, with Odell Beckham a game time decision and Jarvis Landry on IR, he may see some downfield targets from Baker Mayfield. Priced at only $200 more than the minimum price, Schwartz is worth inclusion as a dart-throw in tournament lineups.

DeVante Parker leads the Dolphins in Air Yards. This is not a sentence I anticipated typing in 2021 but here we are. With Jalen Waddle commonly utilized on drag routes, evidenced by his 5.4 (No. 79 among qualified wide receivers) Average Target Distance, Parker is the receiver the Dolphin utilize downfield although he has a 10.9 (No. 39) Average Target Distance. With Will Fuller set to return in Week 3, it is perhaps best to wait and see how target distribution and Air Yards opportunity plays out before inserting Parker into your DFS lineups.

Quintez Cephus is the WR1 in Detroit. While fantasy players were drafting Tyrell Williams and Breshad Perriman this offseason to get late round exposure to this passing attack, Cephus leads all of the Lions wide receivers in fantasy points, averaging 14.3 Fantasy Points Per Game. When Jared Goff isn’t looking to get it to T.J. Hockenson, Cephus is his next look in the passing game. While the Lions face off against a tough Ravens secondary in Week 3, at only $3,900, Cephus is a great cheap option in cash games. 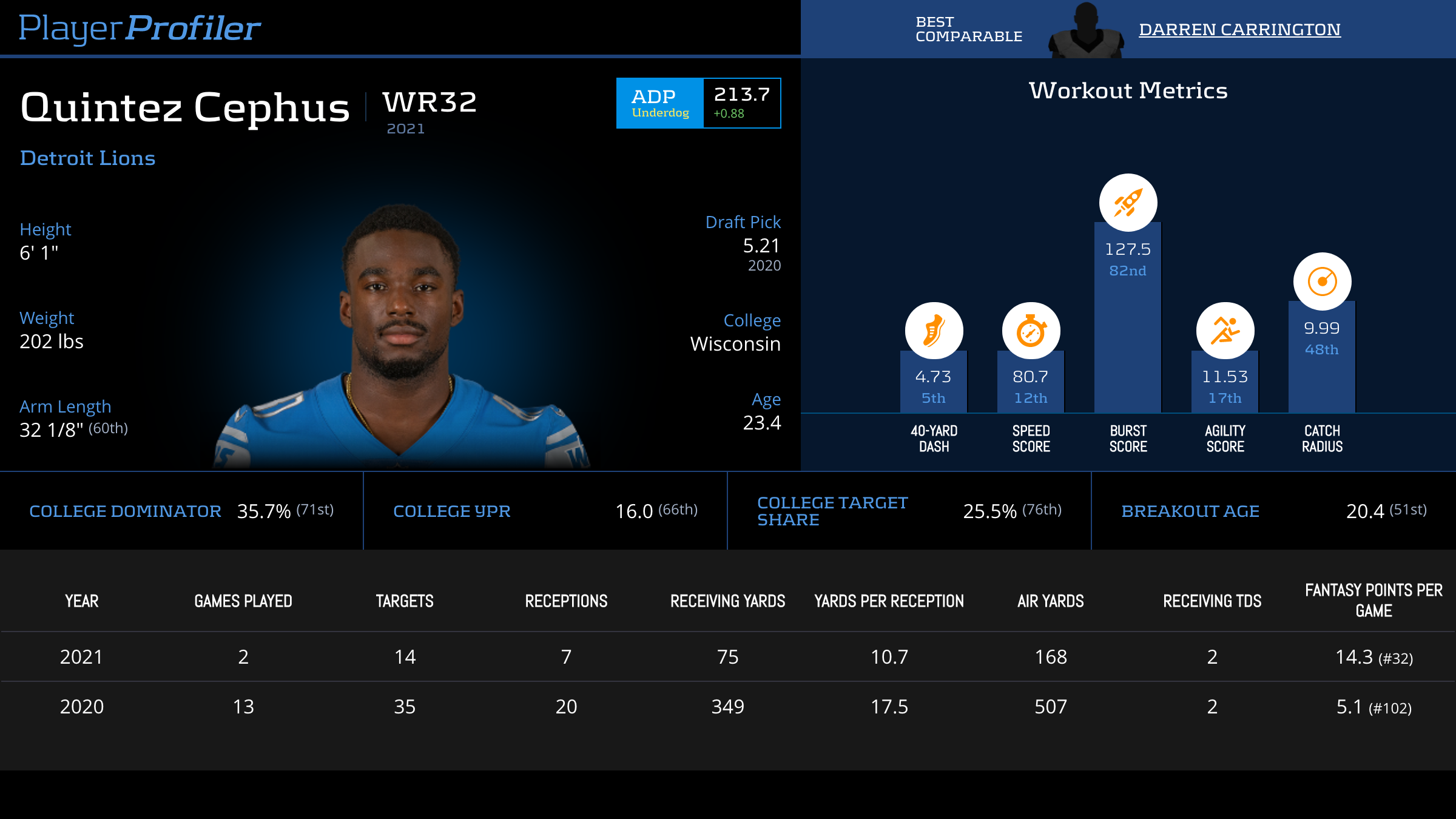 Darius Slayton remains fantasy relevant in New York despite the Giants bringing on Kenny Golladay. Both Slayton and Golladay have seen similar usage in the Giants passing attack through two weeks. Slayton trails Golladay by only one target on the season, and by only 18 Air Yards. Despite Golladay exhibiting a slim lead in opportunity, Slayton has out paced the presumed WR1 of the Giants in fantasy points. With Atlanta’s porous defense on tap for the Giants in week three, Slayton is a solid contrarian way to gain exposure to that matchup.

Elijah Moore led the Jets with 80 Air Yards in Week 2, and now leads the Jets in Air Yards on the season. Moore even out targeted Corey Davis in Week 2, seeing eight targets compared to Davis’ five. While this trend will likely not continue in Week 3, Moore is clearly a player the Jets want get opportunity. With the Jets facing a tough Broncos defense and Zach Wilson coming off a four interception performance, Moore is a desperation dart throw in DFS that could pay off.

Michael Pittman had an unexpected breakout game against Jalen Ramsey and the Rams defense last week. He saw 12 targets for 8 catches and 123 yards. Pittman had 119 more Air Yards than the next closest wide receiver on the Colts in Week 2. The second year receiver faces an exploitable Titans secondary in Week 3, however with Carson Wentz‘s health up in the air, there is too much volatility in Pittman’s range of outcomes if Wentz sits. However, if Wentz plays, Pittman is a player to consider in all formats.

D.J. Chark is continuing where he left off last season, which is not a good thing for fantasy. Last season, he ranked No. 9 among all qualified receivers in Unrealized Air Yards, and saw a 14.0 (No. 14) Average Target Distance. This season, he has a 15.1 (No. 16) Average Target Distance with 147 (No. 6) Unrealized Air Yards. It might be time to start thinking that his 2019 breakout, where he finished as the WR19 in Fantasy Points Per Game, was a fake out. For these reasons, Chark is a mere tournament dart-throw this week.

Ja’Marr Chase added another double digit fantasy point finish to the start of his rookie season in week two. He had 15 fewer Air Yards than Tee Higgins, who led the Bengals in the metric last week. However, Chase has over a 50 yard advantage in Air Yards over the course of two games. With Higgins unable to practice until Friday week, there’s a small chance he’s not be able to play.  If he sits, Chase should be a preferred play in all formats. 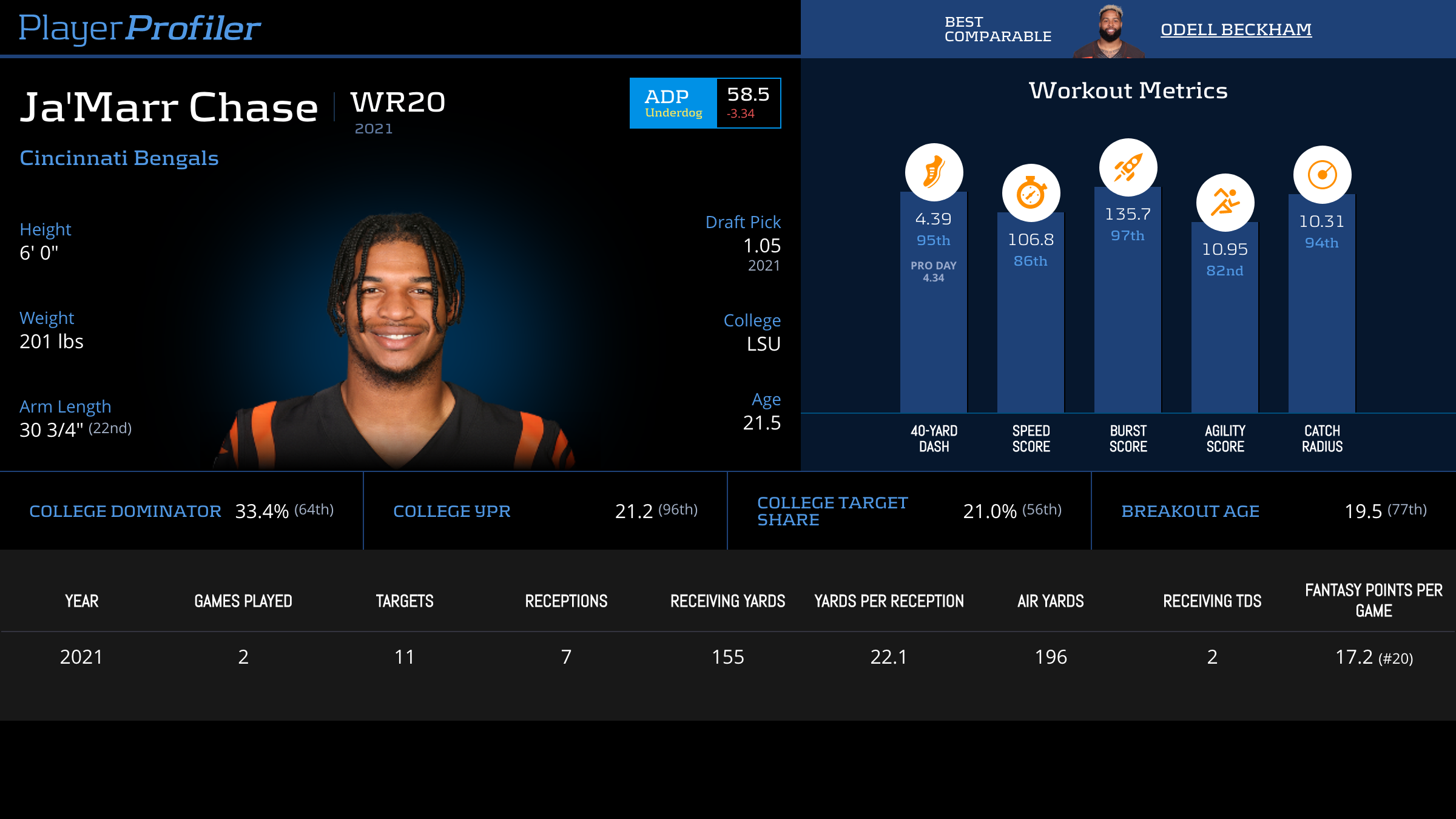 Marvin Jones is the wide receiver to have in fantasy in Jacksonville. He outpaces D.J. Chark and Laviska Shenault in targets, fantasy points, and Air Yards. He is by far and away the most productive and efficient receiver out of the three, posting a +31.0-percent (No. 36) Target Premium. He’s priced $400 less than Chark, and only $500 more than Shenualt. With the Jaguars facing the Cardinals in Week 3, Jones makes for the ideal run back play for those game stacking with Kyler Murray on the Arizona side.

Emmanuel Sanders continued to have problems connecting with Josh Allen in Week 2, catching two of his six targets for 48 scoreless yards. Regardless, Sanders remains the downfield target of choice for Allen, remaining behind only Stefon Diggs in Air Yards on the Bills. He has a tough matchup against a Washington secondary, and for that reason, he is best suited as a tournament dart-throw this week.

Good luck to everyone in Week 3. May all your Air Yards be realized.