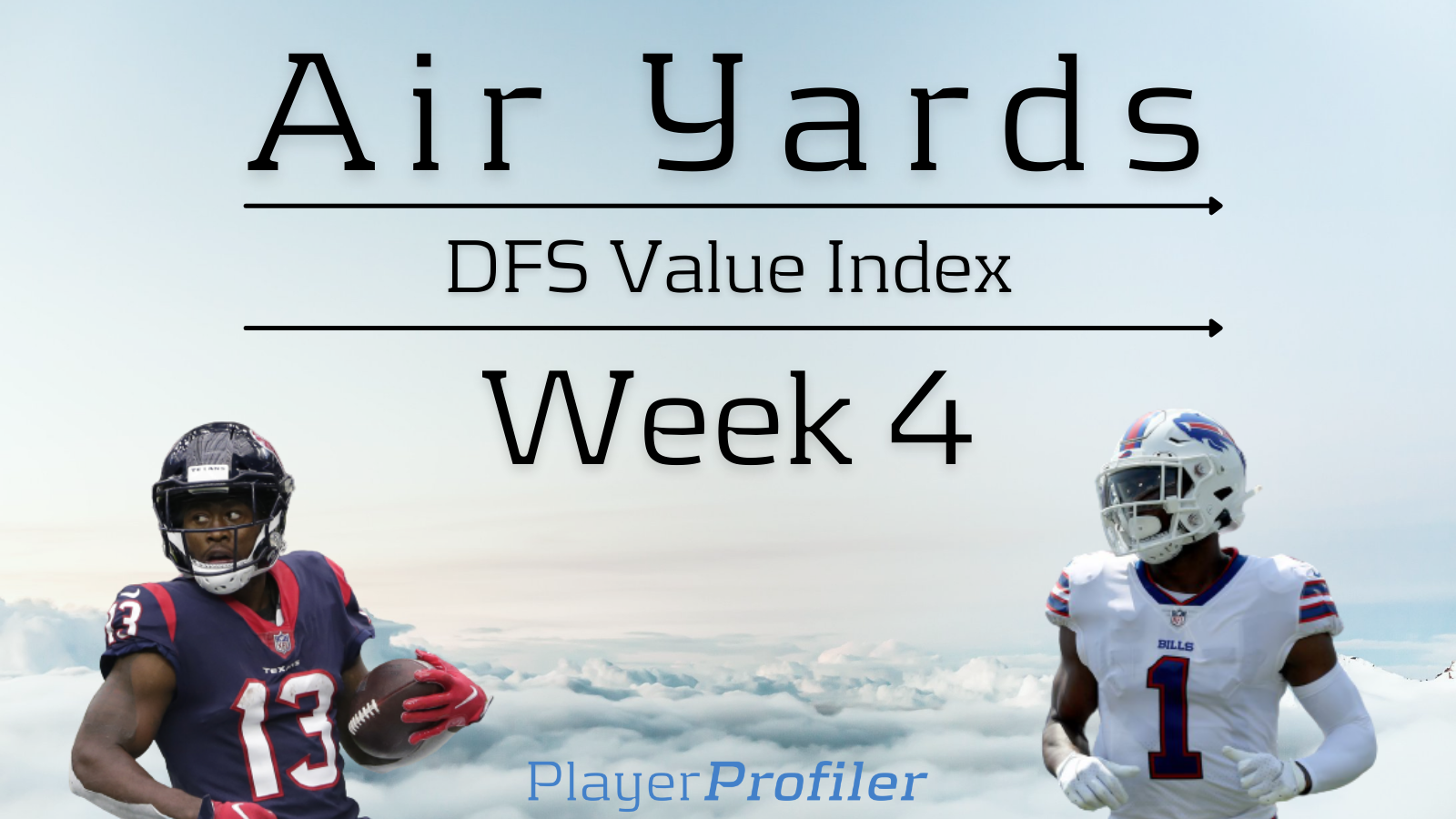 There are three certain things in life: death, taxes, and Brandin Cooks being undervalued in fantasy football. Cooks is THE passing game for the Texans, amassing a league leading 57.8-percent Air Yards Share. It doesn’t matter if it is Tyrod Taylor or Davis Mills throwing him the football, Cooks is seeing the volume to confidently be deployed in all DFS formats. He is currently the WR6 on the season but only priced as 16th highest receiver on DraftKings.

Courtland Sutton makes a consecutive appearance in the paying up section. Priced $300 less than last week, Sutton and the Broncos are set to face a Ravens team, which unlike their prior opponents has won at least one game this season. Already with a 42.7-percent Air Yards Share, Sutton may see even more of the Broncos passing opportunities with K.J. Hamler now lost to injury for the remainder of the season. Despite a tough matchup against the Raven secondary, Sutton makes for an interesting contrarian play on the chance that the Broncos led by Teddy Bridgewater, are a legit offensive force.

Darnell Mooney has more Air Yards, and receiving yards than Allen Robinson. The Bears should look to correct that moving forward, however they are not a competent franchise right now. Regardless, Mooney is set to face off against a Detroit Lions defense that looks exploitable. While his 7.7 (No. 80) Average Target Distance is reflective of the atrociousness of the Bears offense, Mooney has the ability to stretch the field based on his workout and college metrics in the event someone is able to open things up. For now, he is best utilized as a GPP tournament dart-throw.

Note: Jet’s receiver Elijah Moore technically had a higher Air Yards Value Score (37.83) than Mooney this week. However, we previously discussed Moore last week. Not much has changed with the Jets offense and his situation in DFS. Additionally, he is currently not practicing as a result of a concussion. He remains, like Mooney, a mere dart throw, if he plays. 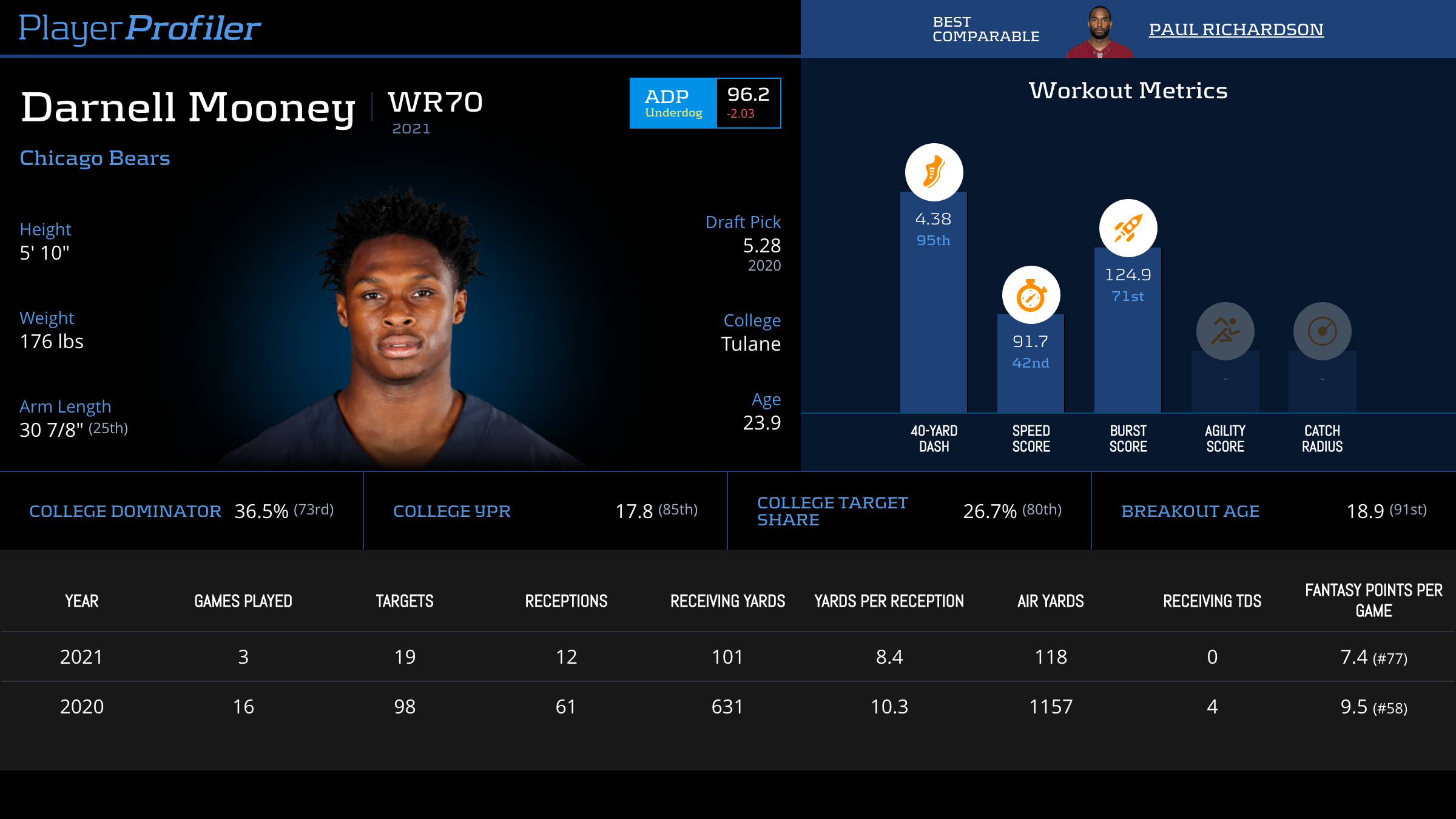 Dyami Brown‘s time as the starting wide receiver opposite target hog Terry McLaurin may be coming to an end with Curtis Samuel practicing this week. However, assuming Samuel remains on the injured reserve, Brown is in an intriguing spot this Sunday against a poor Falcons defense. He leads Washington with 4 (No. 26) Deep Targets on the season and is their field-stretcher, with a 14.2 (No. 20) Average Target Distance. He is a preferred dart throw in tournaments and will look to get behind the Falcons secondary in Week 4.

Kenny Golladay was not a happy man on the Giants sidelines last week after seeing only five targets against the Falcons. While an anticipated matchup against Marshon Lattimore and the Saints does not make for a great spot for a blow up, “squeaky wheel” game, there is no better time for the Giants to focus on getting their prized free agent acquisition involved. He pulled ahead as the Giants season leader in Air Yards last week and should be a focal point of the offense moving forward, especially with teammates Sterling Shepard and Darius Slayton nursing hamstring injuries. Golladay should see a massive amount of opportunity and is a recommended play in all formats despite the tough matchup.

Corey Davis scored two touchdowns in Week 1 and and appeared to be a fantasy dynamo of underrated Jets offense. Since Week 1, Davis has averaged under 6.0 Fantasy Points Per Game. After seeing 100 Air Yards last week, Davis remains a large part of the Jets offense. And with the Titans on tap for Week 4, he squares off a soft defensive matchup for the first time all season. He makes for a great anti-recency bias contrarian play. However, I’m likely reserving playing him for tournaments only based on the possibility of another Zach Wilson face-plant.

Both Watkins and Brown appear to be utilized similarly in the passing game. having close to the same amount of Deep Targets (Brown has six [No. 5] compared to five [No. 17] for Watkins) and there is less than a yard and half difference between their Average Target Distances. While Brown has been scoring the points, it should be only a matter of time until Watkins pulls even with the third-year receiver. Both are solid plays in DFS this week, but do not be hesitant to play Watkins over Brown as a contrarian play if looking to stack Lamar Jackson with a receiver against Denver.

Emmanuel Sanders was an Air Yards play hit last week, recording five receptions on six targets for 94 yards and two touchdowns. He also amassed 100 Air Yards. As part of the Bills pass-heavy offense, Sanders will continue to receive opportunities downfield. He has six (No. 5) Deep Targets, and a 16.8 (No. 11) Average Target Distance. He is a mainstay in any Bills stack, and for less than $5,000, is a great play in all formats.

DeVante Parker makes the value list for the second consecutive week. Unfortunately, the insertion of Jacoby Brissett as the starter under center for the Dolphins translated to a season-low 8.2 (No. 59) fantasy points in Week 3. However, he saw a season-high 121 Air Yards. That said, he trailed Will Fuller in Air Yards by three. Parker is still in wait and see territory for DFS with Fuller expected to be active again this week.

Michael Pittman has seen 12 targets and at least 125 Air Yards over the past two contests. He is currently the WR24 on the season and appears to be one of the few second year receivers that is actually having a breakout. Despite injuries to Carson Wentz and the Colts offensive line, Pittman has averaged double digit fantasy points the past two games, including a WR13 finish in Week 2. With the Colts slated to square off against a stout Miami Dolphins secondary, Pittman, despite his great usage, is best reserved for cash lineups. It is hard to see how he finishes as a top five wide receiver on the week.

Marquez Valdes-Scantling finally boomed in Week 3, finishing as a top 24 WR on the week after hauling in three receptions for 59 yards and a touchdown. He may have had a bigger week if he was not forced to leave the game with a hamstring injury. Unfortunately, Valdes-Scantling’s hamstring has sidelined him at practice thus far this week. Assuming he is able to go on Sunday, he should still be considered a boom-bust DFS option since the hamstring may hobble him.

Good luck to everyone in Week 4. May all your Air Yards be realized.