Welcome to the newest edition of Thursday Night Showdown. Similar to what the Salary Cap-tain has brought you on Monday nights, I’ll be guiding you through the important aspects to watch in each Thursday night matchup.

Without further ado, let’s see what the Jacksonville Jaguars and the Cincinnati Bengals have to offer us this week.

Joe Burrow is playing better than people are giving him credit for. He’s been accurate and efficient, posting a 73.6-percent (No. 18 among qualified quarterbacks) True Completion Percentage, 50-percent (No. 12) Pressured Completion Percentage, and 7 (No. 3) Money Throws. His offensive line has surprisingly protected him well, with an 84.5-percent (No. 12) Protection Rate. Burrow’s problem is that his ceiling is capped because he’s passing at a much lower rate than expected, throwing 25 attempts per game so far. He appears to be a promising play this week against a porous Jags defense, but the projected Game Script and short week doesn’t bode well for his ceiling.

Joe Mixon truthers, prepare your victory laps. Tonight is the night. Mixon has seen 51.2 (No. 6) Weighted Opportunities on an 86.0-percent (No. 2) Opportunity Share and 65.3-percent (No. 3) Route Participation. He’s getting a boatload of fantasy-relevant opportunities. What he hasn’t done is score multiple touchdowns, that’s why he’s an RB2 and not an RB1. Per ProFootballReference, the Jaguars have given up 5 (T-No.3) rushing touchdowns through 3 weeks. Mixon is set up to score this week, and smash in fantasy lineups.

The Bengals pass catchers are missing Tee Higgins again, which pushes up Ja’Marr Chase and Tyler Boyd. Chase was already a smash play. The rookie is already soaking up the opportunity in Cincinnati, scoring 4 touchdowns and logging two top-15 fantasy performances. Through three weeks, he has a 45.8-percent (No. 8) Dominator Rating and a 46.8-percent (No. 5) Air Yards Share, while maintaining a 100-percent (No. 1) Route Participation. Chase can be playable in fantasy without scoring, and needs to be started in all formats. 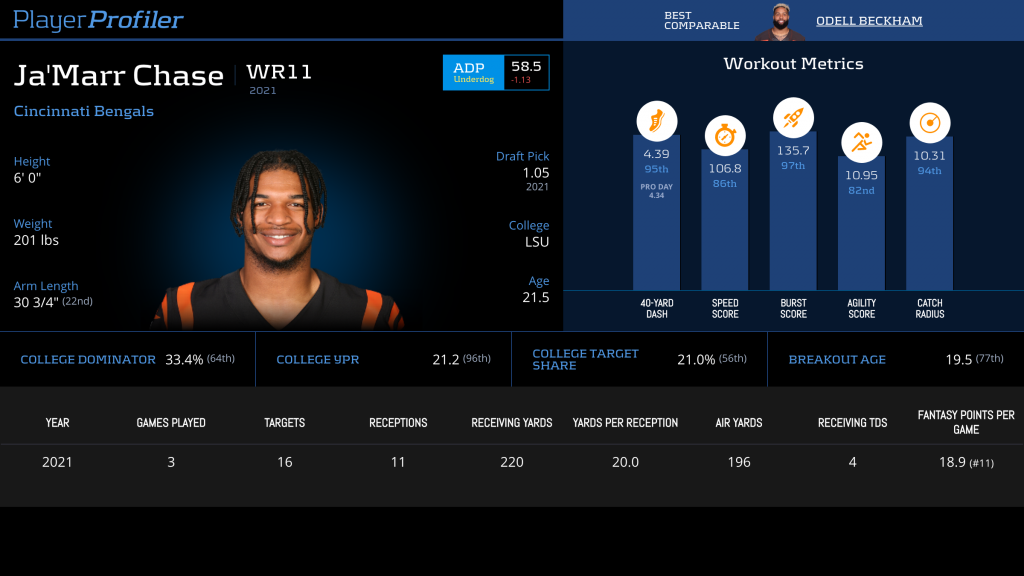 Tyler Boyd was saved by a touchdown, which boosted a previously dull performance. Boyd has been getting used like, dare I say, Laviska Shenault. His 5.3 (No. 94) Average Target Distance is down 3.6 yards from last year. Shallower targets and fewer Air Yards is not what we want to see with a receiver like Boyd. However, he is getting a steady Target Share. He is a viable flex option and could take off if he can be used more downfield.

James Robinson had his resurgence last week. Urban Meyer finally figured out that JRob is better in the passing game. Robinson has received 42.2 (No. 12) Weighted Opportunities with a 57.6-percent (No. 8) Route Participation, two stats you love to see for an RB in fantasy. On a per-touch basis, Robinson has been pleasantly efficient. He’s a low-floor/high-ceiling flex play in PPR formats.

Clemson phenom Trevor Lawrence‘s debut has been a struggle. He has a dismal 3.7 (No. 32) Adjusted Yards per Attempt, and averages 2.33 interceptions per game. The Urban Meyer project is failing, and it’s at the expense of a gifted quarterback. The reality we live in is that this offense is likely not going to get more efficient as the season goes on. Don’t start Lawrence unless you absolutely have to.

D.J. Chark, the king of prayer yards, is the same as he’s always been. A WR2 when he scores, and an absolute bust when he doesn’t. He’s not getting a lot of opportunity, as shown by his 19.3-percent (No. 44) Target Share and 88.1-percent (No. 31) Route Participation. He’s also been inefficient. Even against a soft Bengals secondary, he remains an untrustworthy flex play.

The Jaguars are breaking Laviska Shenault. I don’t think he stinks…yet. He’s been horribly misused, limited to a 4.3 (No. 95) Average Target Distance, 83.1-percent (No. 44) Route Participation, and a -26.8-percent (No. 121) Target Premium. Until proven otherwise, Shenault belongs on the bench (but is a sneaky Hail Mary in DFS).

“Look how they massacred my boy” – Vito Corleone 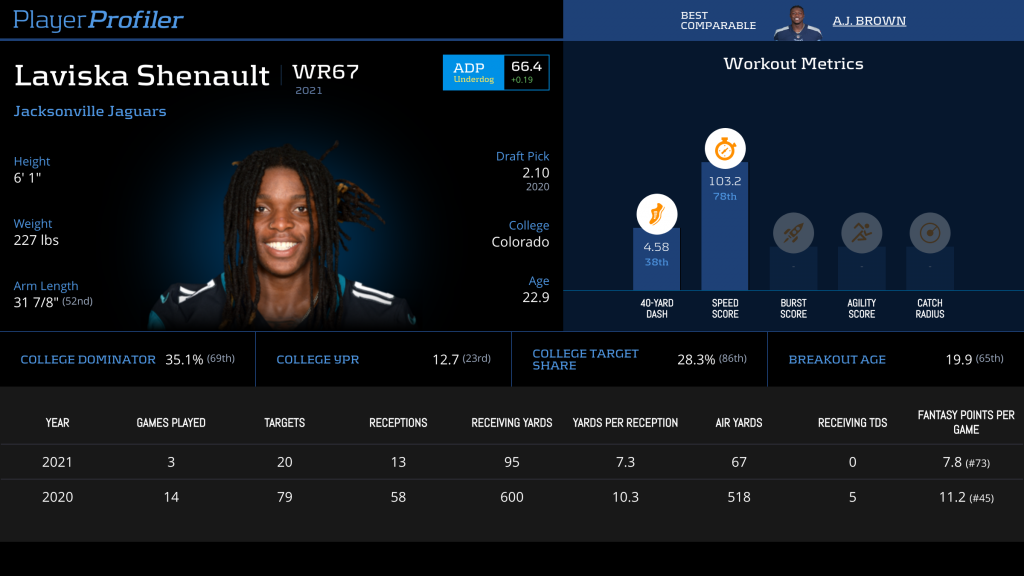 If you’re looking for an efficient receiver in this offense, there is none. Marvin Jones is the best of the worst. He’s running the most routes, and his 0.0 (No. 72) Production Premium leads the core. Despite the inefficiency, he’s posted 16.1 (No. 21) Fantasy Points per Game. He’s a target-hog deployed in the only range Trevor Lawrence can seem to complete targets. He’s another flex option tonight, with the safest floor of the trio.

45.5 is a trap total. It’s a short week and Cincinnati plays at a slow pace. I see this being a slow, one-sided matchup and for that I’m taking the under.

For fantasy, this is pretty clear cut. You can rely on your Bengals, and you can’t rely on your Jaguars. Marvin Jones and James Robinson are the only possible exceptions to the rule.