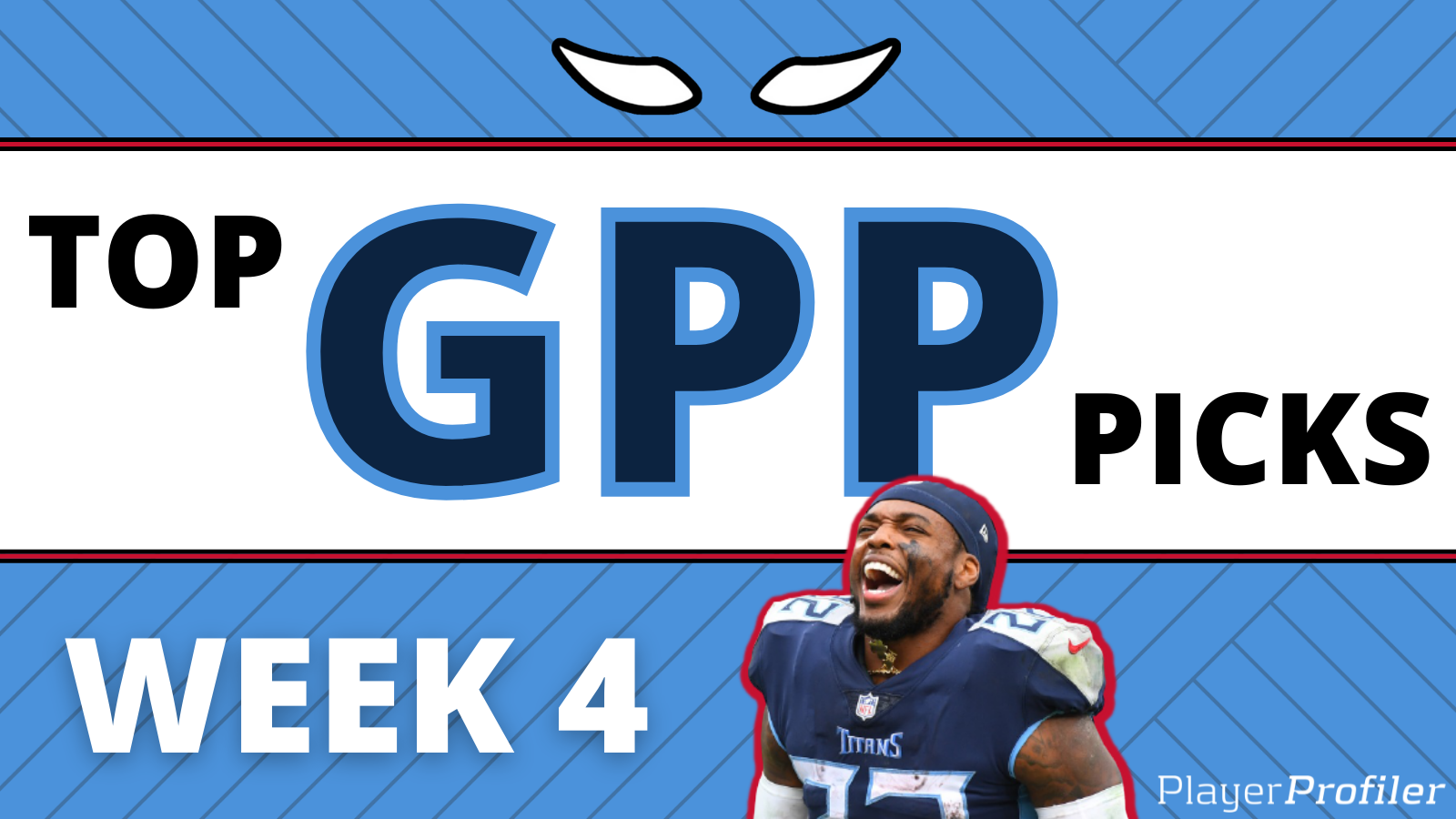 It’s always a tough scene recommending a player a week after they broke the slate. It worked with Cooper Kupp in Week 3 and I’m expecting similar results from Josh Allen in Week 4. One of (if not the most) predictive indicators to look for in game selection is high Vegas totals. The Bills’ 32-point implied Vegas total stands out as the slate leader as they visit the Texans. Allen’s 42.33 Pass Attempts Per Game (No. 4 among qualified quarterbacks) gives us a clear-cut source of the Bills’ said points. 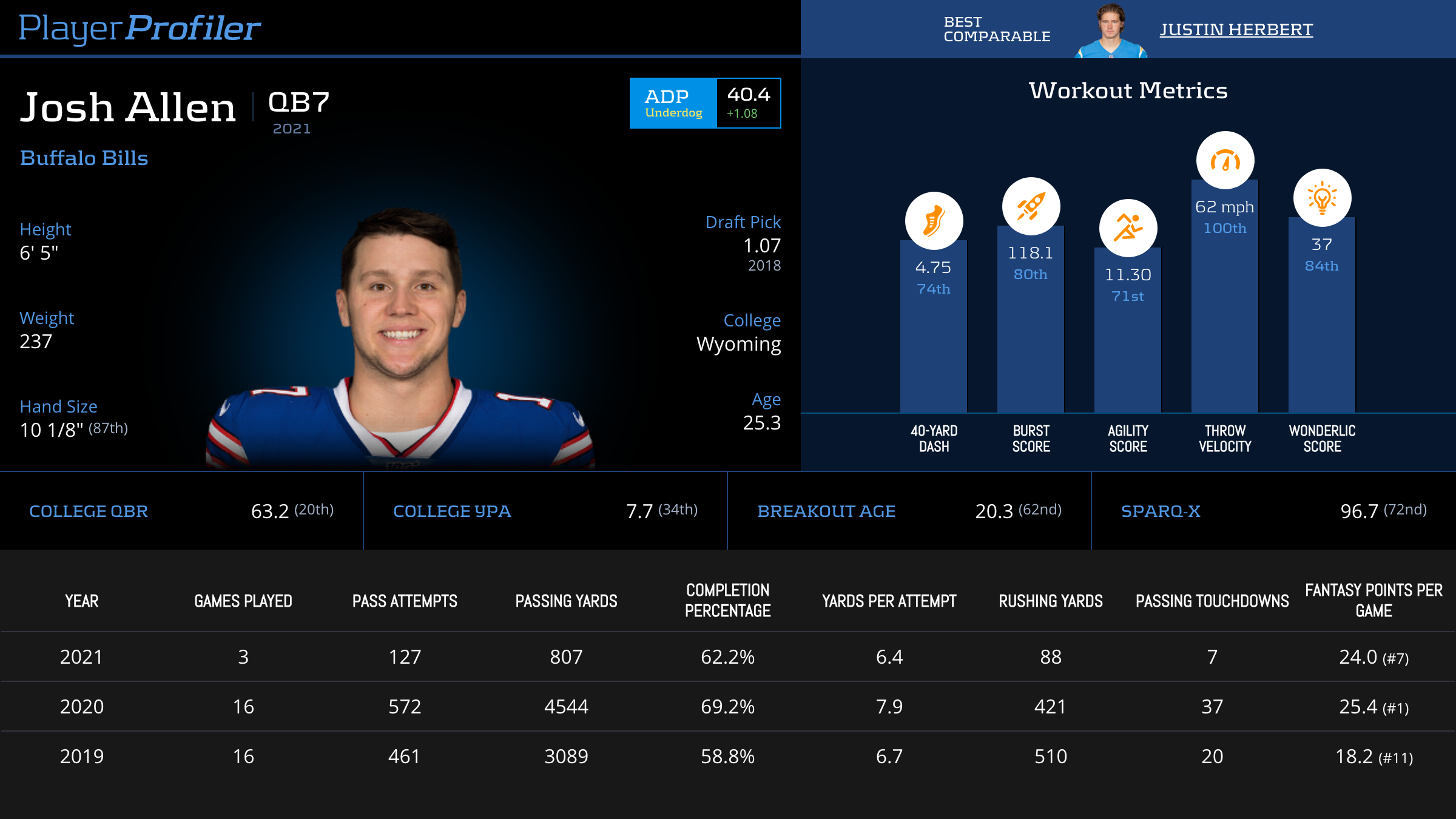 Facing a sputtering Texans offense led by “Neckatron” Davis Mills, it’s safe to assume the Bills will be keeping a lead in this one. They rank No. 1 in Game Script, so them playing with a lead is nothing new. Allen’s 177 (No. 5) Completed Air Yards Per Game and seven (No. 4) Passing Touchdowns is just the icing on the cake.

This spot against the Falcons might be the best matchup journeyman Taylor Heinicke has faced yet. Atlanta’s pass defense has been bad, allowing an average of 25.2 fantasy points (No. 28) to quarterbacks. While that number is bad, the Football Team is one of only a handful of teams that have been even worse against quarterbacks. This game sets up for everything we want in a game stack situation, including two bad defenses with salary savers like Heinicke ($5900 on DraftKings). With a 28-percent Target Share, Terry McLaurin is the most logical stacking option.

After burning countless parlays in back to back weeks, the Chiefs look to get right this week with a visit to Philadelphia. Patrick Mahomes has yet to pay off his exorbitant price tag in recent weeks despite throwing for at least three passing touchdowns in each start. Mahomes’ 8.0-percent Touchdown Rate, 313 Passing Yards Per Game and nine passing touchdowns all rank top five at the position. Jalen Hurts should also do enough to keep the game competitive.

With Christian McCaffrey ruled out, and Dalvin Cook looking questionable, Derrick Henry seems to be the last man standing among the stud running backs. Henry’s production is no surprise, evidenced by his league leading 27 Carries Per Game and 118 Rush Yards Per Game (not to mention his steep price tag). What has been a surprise, however, is his pass game usage. 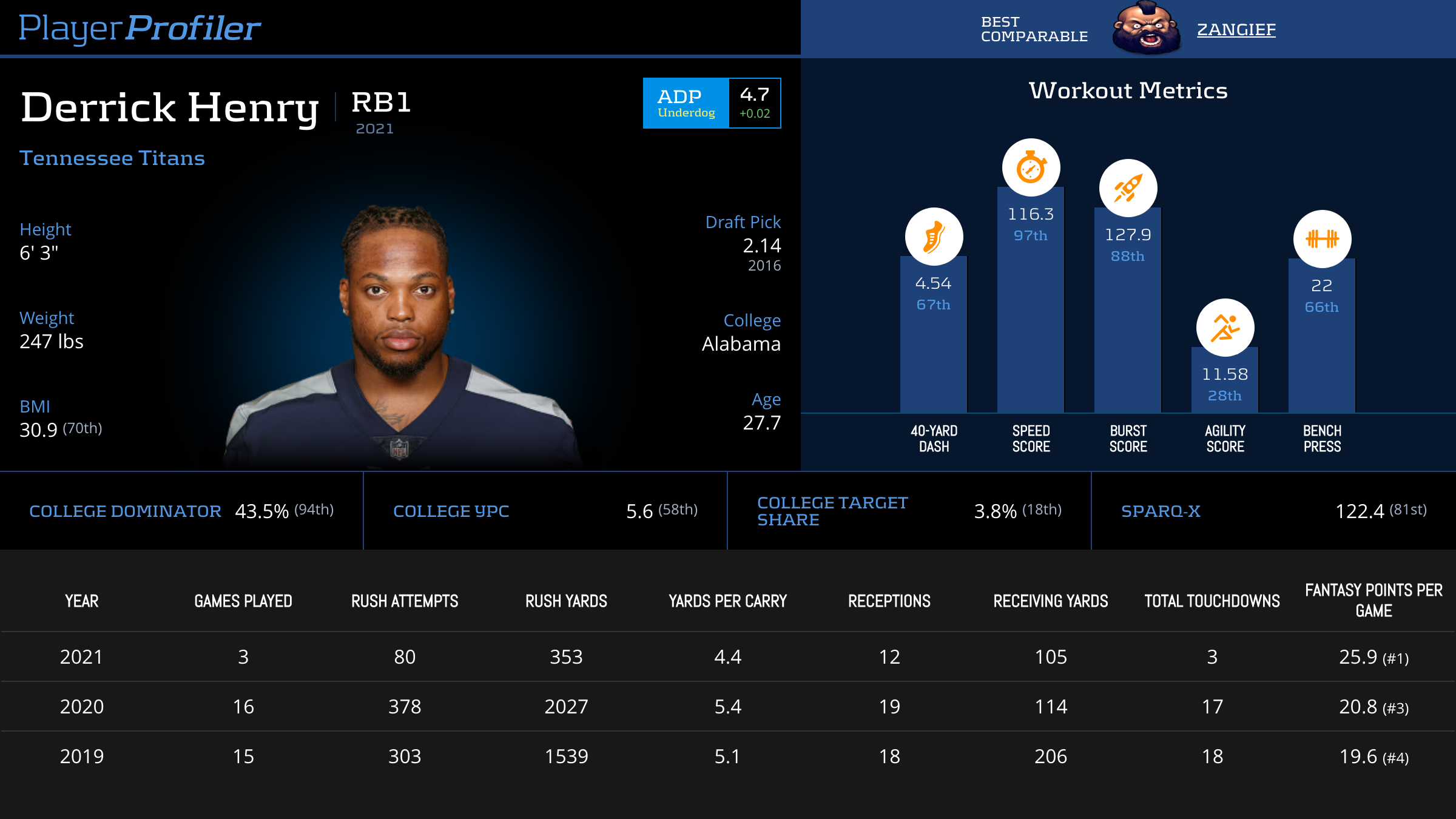 Due in part to A.J. Brown battling a hamstring injury, Henry has been deployed more as a receiving outlet for quarterback Ryan Tannehill. His 13.0-percent (No. 13) Target Share may not seem like a lot, but it is actually twice as much passing work as he saw in each of the last two seasons. Henry’s 12 receptions to start the season are more than prominent pass catching backs such as Alvin Kamara and Saquon Barkley. A.J. Brown and Julio Jones both missed Thursday’s practice.

Darrell Henderson could be a sneaky play this week if he suits up. He missed Week 3 with a rib injury but has already got in a few limited practices. Even with missing last week, his four carries inside the 5 and two total touchdowns rank No. 3 at his position. When on the field, Henderson’s 80.7-percent Snap Share is second only to Najee Harris. While I’ll surely have some Cooper Kupp exposure, I’ll underweight the field and leverage with Henderson shares given his elevated usage.

Alvin Kamara is always in play. His 77.6-percent (No. 6) Opportunity Share and 23.0-percent (No. 1) Target Share are elite. His opponent this week, the Giants, have allowed the second most receiving yards to running backs this season. You need some Kamara exposure.

An affordable wide receiver to consider this week is Kalif Raymond at only $4400. In prior weeks, he had been relegated as the third option behind teammates D’Andre Swift and T.J. Hockenson. In Week 3, however, Raymond owned an impressive 34.5-percent Target Share. The matchup against the Bears is intriguing too. They have allowed much more fantasy points to wide receivers than tight ends (No. 21 against receivers and No. 8 against tight ends). He’s no more than a sprinkle play in your MME but needs to be in consideration. 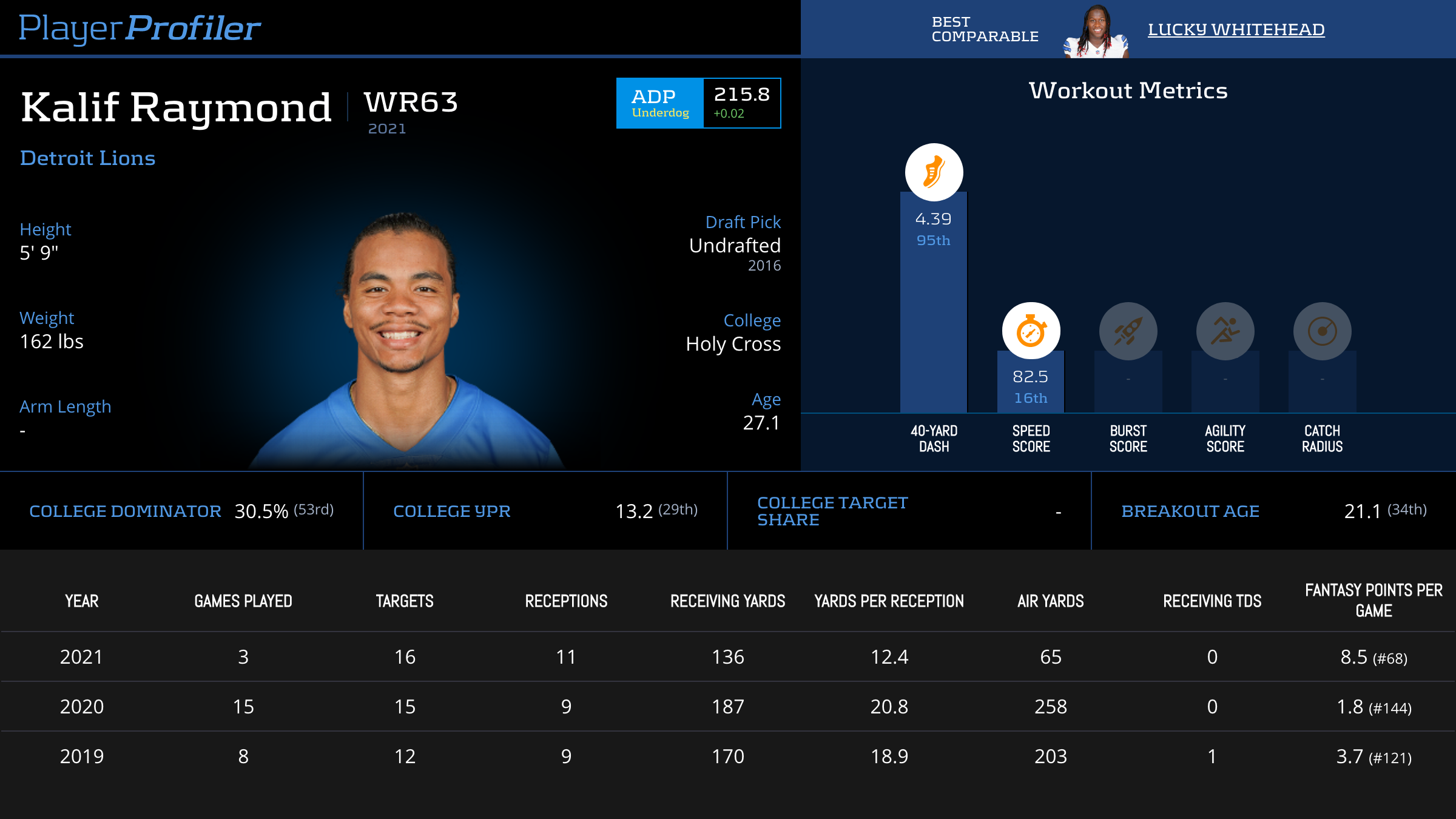 Calvin Ridley has slate-breaking upside and a great matchup to boot. The once vaunted Washington Football Team secondary appears to be an unanticipated pass funnel defense. The Football Team ranks last in receptions (62) and receiving yards (741) allowed to wide receivers.  Even with a 36.8-percent (No. 9) Red Zone Target Share and 9.6 (No. 6) Targets Per Game, Ridley has yet to top 100 yards receiving with a touchdown. What better spot than this to get right?

As is the case most weeks, the tight end position is looking rough in Week 4. While Travis Kelce is an obvious option, I’m more interested in the savings by rostering George Kittle. 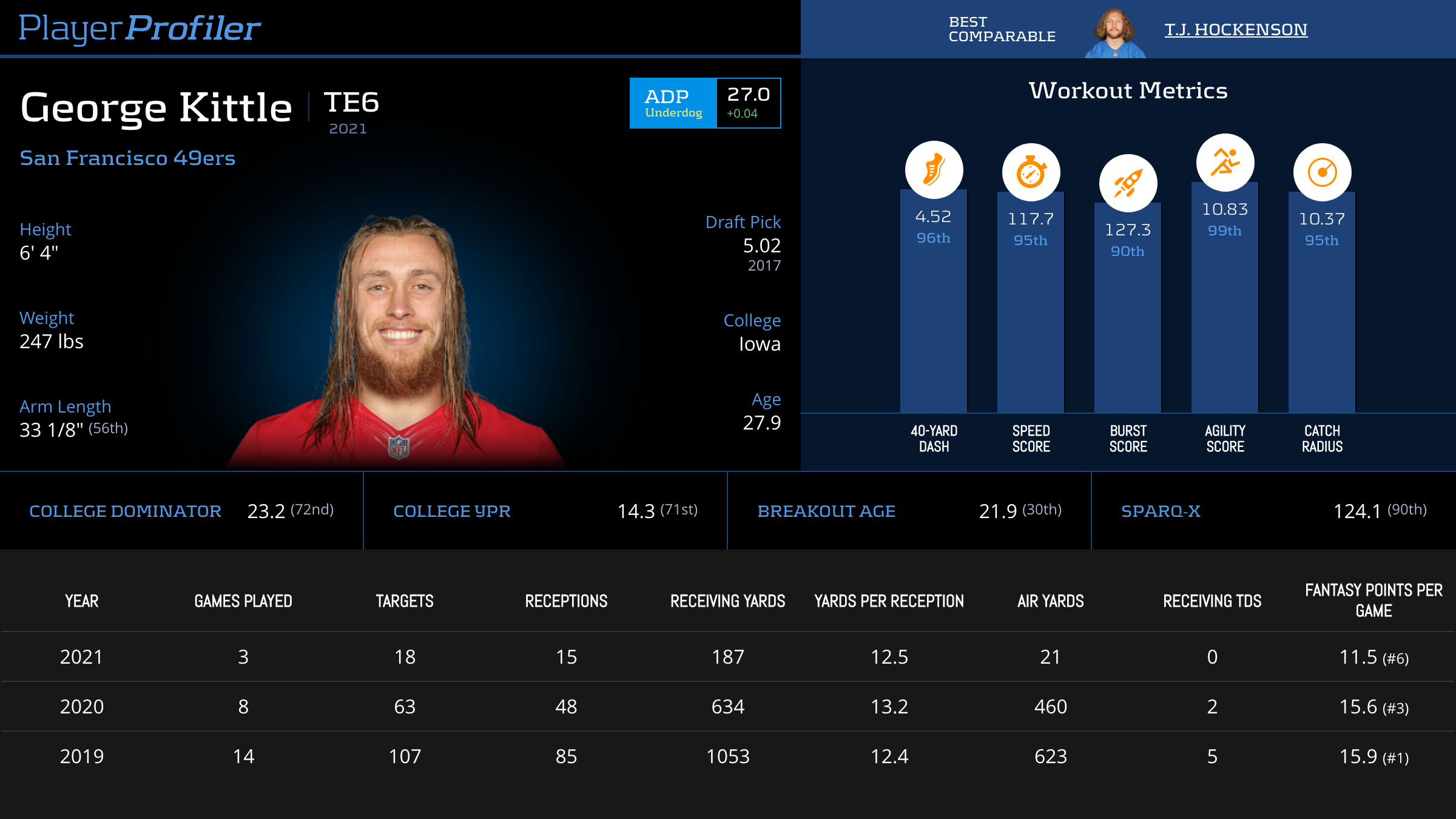 At a $2,200 discount, Kittles’ 21.6-percent (No. ) Target Share and 6 Targets Per Game are at the very least “Kelce-esque.”  Furthermore, the Seahawks have allowed the eighth-most fantasy points to tight ends.